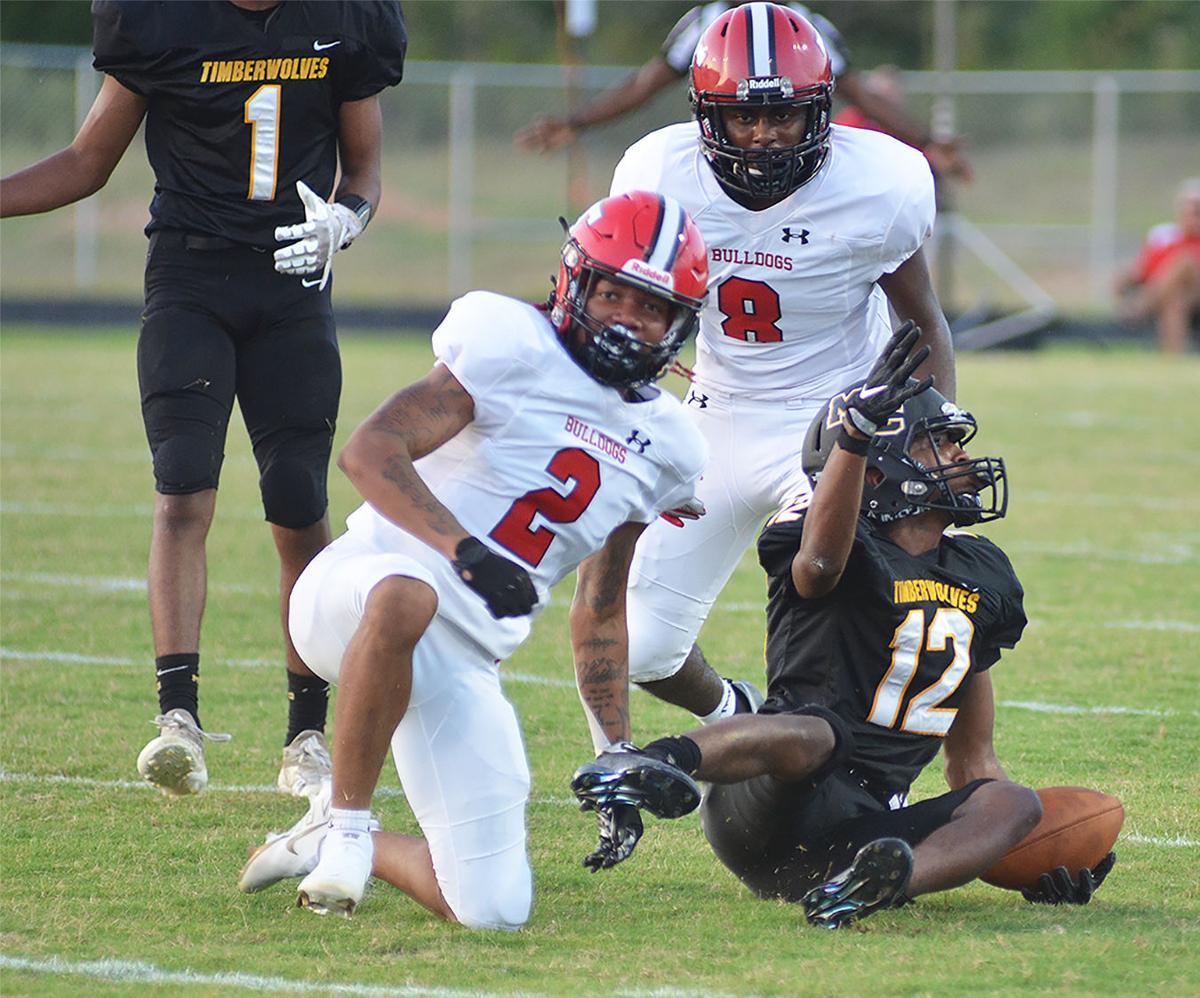 Thomasville’s Lymeake Washington (2) makes a crucial stop on fourth down in the first quarter of last week’s win at Montgomery Central. 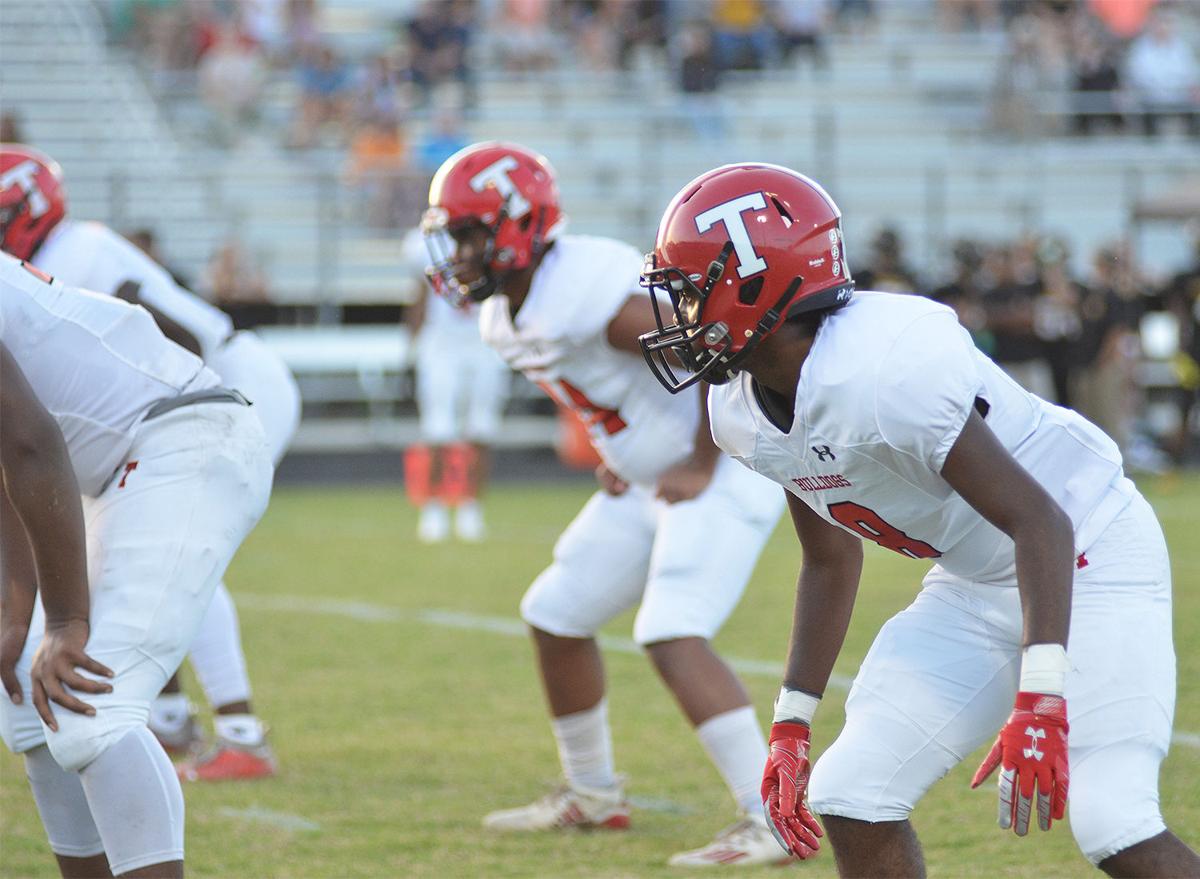 Thomasville’s defense, led by Nate Williams (8), pitched a shutout for 56 of the game’s 60 minutes Friday at Montgomery Central. 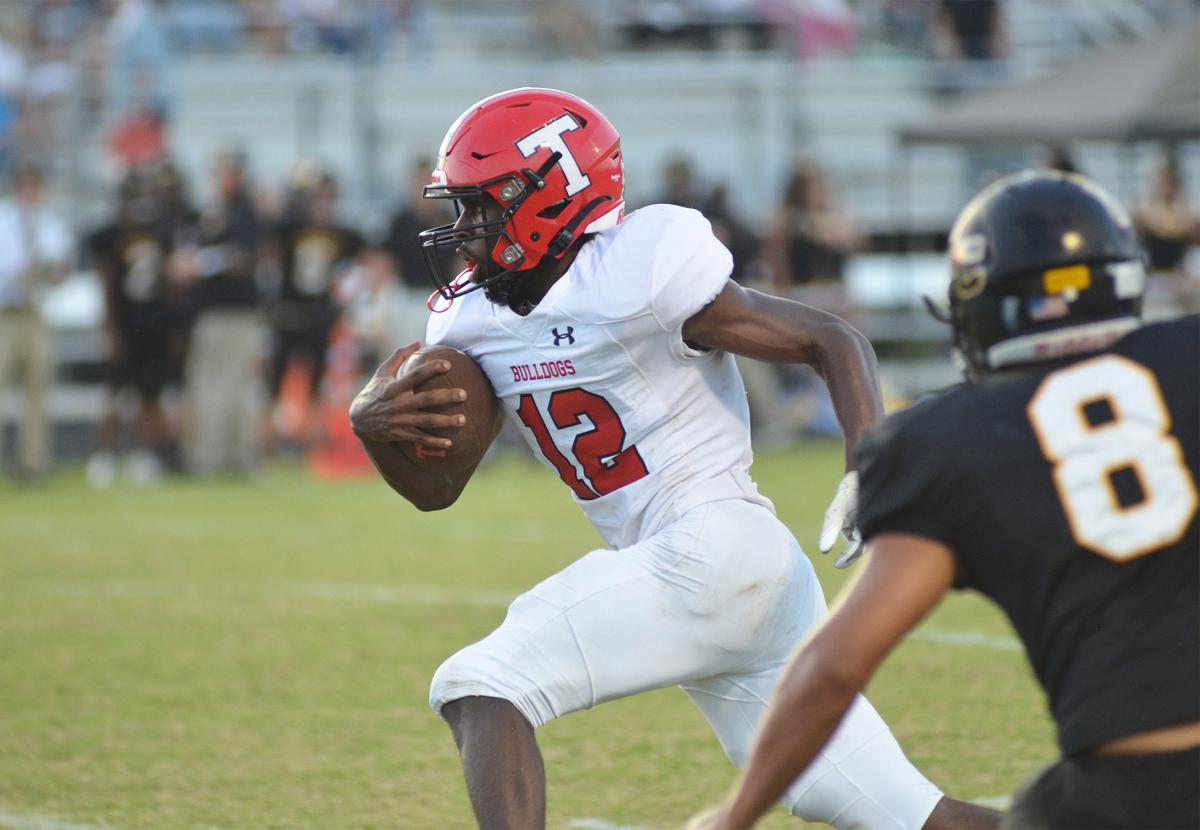 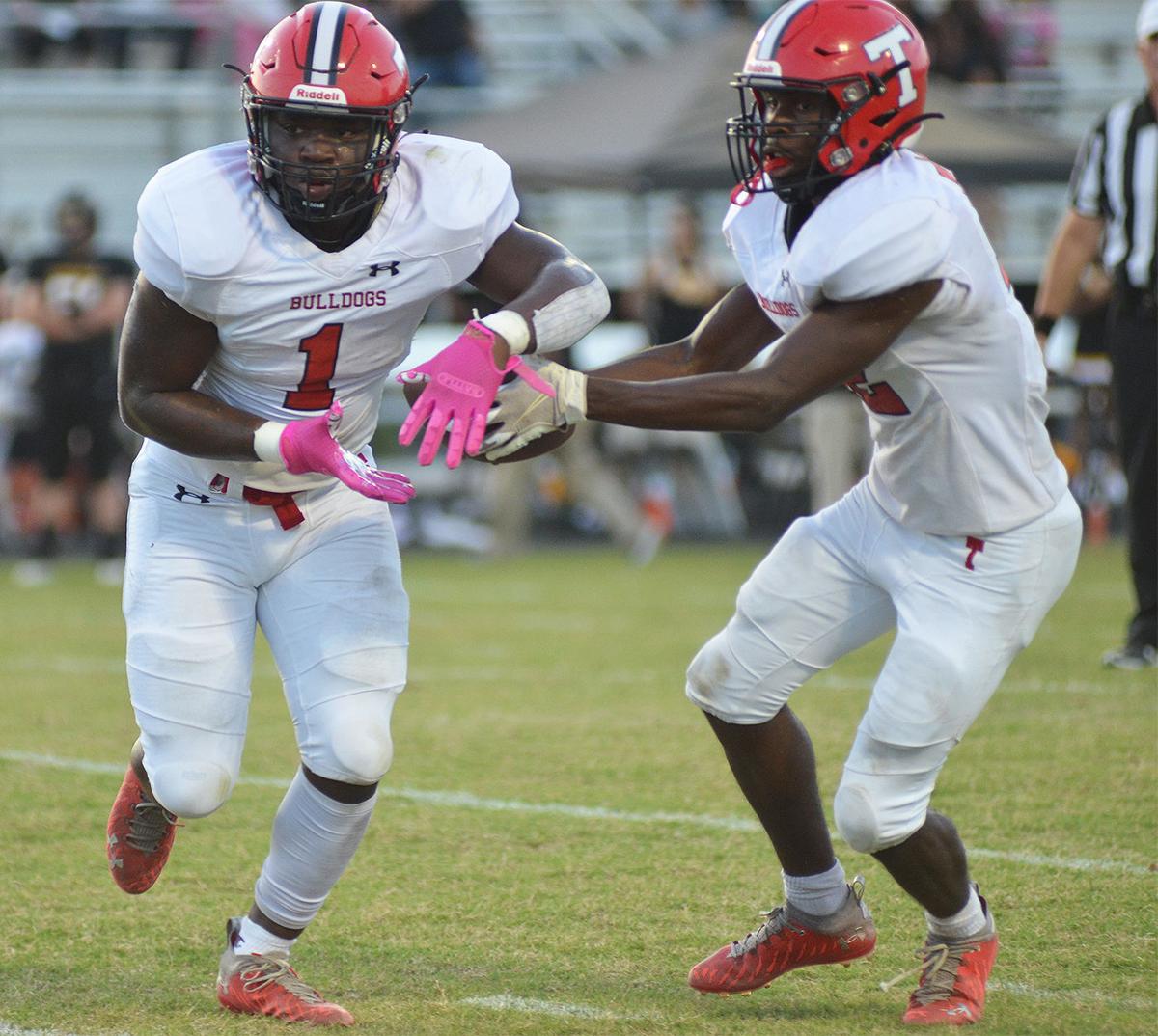 Thomasville’s Lymeake Washington (2) makes a crucial stop on fourth down in the first quarter of last week’s win at Montgomery Central.

Thomasville’s defense, led by Nate Williams (8), pitched a shutout for 56 of the game’s 60 minutes Friday at Montgomery Central.

THOMASVILLE — The Bulldog defense picked up right where it left off in Week 1 on Friday night in Troy.

For a second straight week, Thomasville (2-0) brought the lumber to an opponent that was unable to muster points. In this case, it took 56 minutes for Montgomery Central to break a seven-quarter scoreless streak to start the season.

In defeating the Timberwolves 34-8 last week, the Bulldogs issued a resounding statement. Through the first 116 minutes of the 2021 campaign, THS outscored Albemarle and Montgomery Central by a combined 84 points.

“Each week, they come out here and get better and better and better,” Bulldogs coach Kevin Gillespie said after the Week 2 win. “They’re more comfortable with what we’re asking them to do. The sky’s the limit for them. We can’t overlook, we can’t think that all of the sudden we’ve arrived, because everybody we play can beat us. If they just keep coming out there and just let the game come to them, instead of doing too much, we’re going to be all right.”

On Friday, it was Lymeake Washington who helped set the tone on both sides of the ball.

Keyed by a stop on fourth down in the first quarter by Washington, quarterback CJ Dickerson plunged into the end zone with less than a minute remaining in the opening period to give Thomasville an 8-0 advantage with his 1-yd TD run. That score followed a series of powerful runs by Jabrii Carolina, the last of which appeared to break the plane of the end zone.

Instead, the quarterback put the exclamation mark on the drive to finish the first. Twelve minutes later, it was Washington on the receiving end of a 16-yard TD strike across the middle that made it 16-0 in favor of the Bulldogs headed into halftime.

Gillespie was complimentary of his senior playmaker following the game, giving him and rest of the receiving core kudos for helping set up scoring opportunities for Dickerson and Carolina.

“Lymeake is a great kid and a special player,” Gillespie said. “When he relaxes and doesn’t try to do too much, he can do a lot with the ball. And he’s so strong and physical, he does a good job blocking.”

Gillespie’s praise extended to the group of linemen who kept the collection of skill position talent clean all night. The coach expressed his appreciation in seeing gaping holes for both Carolina and Dickerson, who each had a pair of rushing scores in the decisive victory.

“The offensive line up front is getting better and better,” Gillespie said. “The receivers this week blocked their tails off. To me, that helps so that when they do make the cut and the right read, they’ve got blocking down the field, so they can gain those yards. And they’re good enough to do that.”

By the time Jaylon Allsbrook connected with Zaitwan Price on a 7-yard touchdown to break up the shutout, the Bulldog ‘D’ had left no room for doubt in the outcome. That play came with just over four minutes left, long after an exceptionally physical front seven for Thomasville had controlled the pace of play throughout.

When the bigger players on both sides of the line of scrimmage keep opposing players from reaching the elusive THS offensive and defensive backfields, it could be lights out for Bulldog opponents this season.

“We’ve got some guys that don’t mind sticking their nose on the ball,” Gillespie said. “We’re pretty athletic. Overall, we’ve got some pretty good team speed. And that helps. If you have that and you have a desire that you want to make a tackle, in my experience, you’re going to make a few.”

Thomasville will look to make a few more this week when the team takes on T.W. Andrews at Cushwa Stadium on Friday. Kickoff is set for 7:30 p.m.