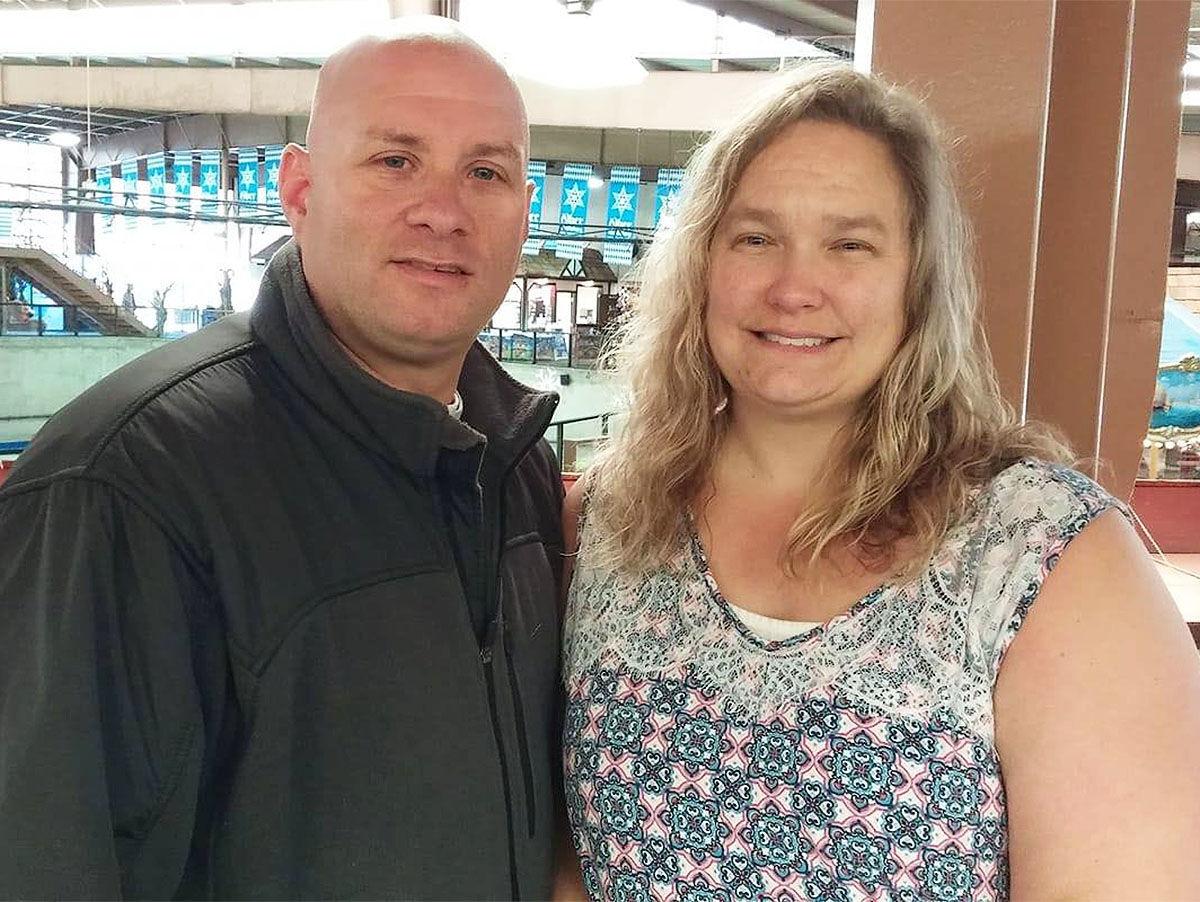 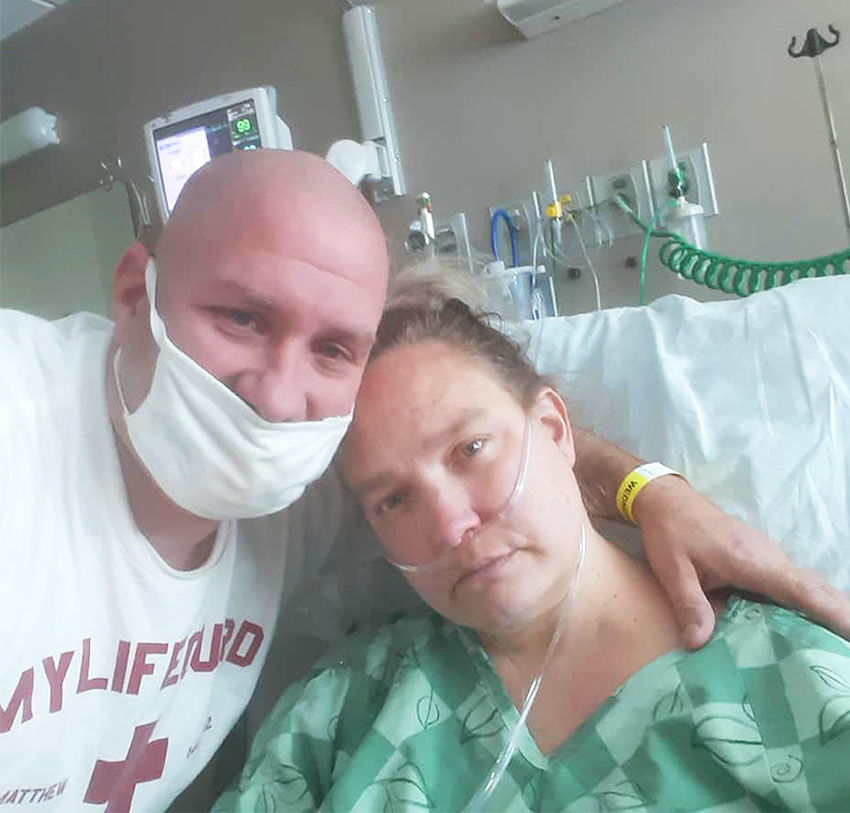 Tim Daut poses with his wife, Ivy, in her room at Kernersville Medical Center, where she was hospitalized with COVID-19. Ivy, who was only 42, died at the hospital on Feb. 5.

Tim Daut poses with his wife, Ivy, in her room at Kernersville Medical Center, where she was hospitalized with COVID-19. Ivy, who was only 42, died at the hospital on Feb. 5.

These should be great days for Tim Daut.

He and his family just moved from their home in High Point to a house in Wallburg, a house that Ivy Daut — Tim’s wife of nearly 12 years — hand-picked for the family. Their children, 11-year-old Ellie and 9-year-old Cooper, should have a happy, carefree childhood growing up there — and maybe they will.

But right now, these are not great days for Daut. They are long days, difficult days, hard-to-fathom days, because the heart of his family is missing.

Just over a month ago, Ivy died of COVID-19, joining a somber roll of some 11,688 North Carolinians stricken by the disease, and serving as a grim reminder that even though this pandemic appears at long last to be dwindling, it is not yet over.

“We trust in our Lord, and we know we’re going to see her again, and we know she’s not suffering anymore,” says Tim, a 43-year-old Thomasville native.

“But that doesn’t make it any easier on us right now. She was my best friend, the mother of my two kids, and I don’t have her now. It’s so hard to know she’s not coming to the new house. She picked it out — it’s the house she wanted for our family — and she never got to spend one night in it.”

The pandemic, which officially arrived in Guilford County last March, has wreaked havoc in so many ways. Men and women, young and old — and children, too — have battled the disease. We also have battled one another over whose fault this pandemic is and how we can end it.

Small businesses have struggled, and many closed, putting people out of work. Health-care professionals have risked their own safety — and the safety of their families — to care for the sick and dying. Schools switched to remote learning, while hallowed traditions such as senior proms and graduation ceremonies were canceled, or at least altered. Sports events were shut down. We stopped gathering. Hugs and handshakes — even among family members — became taboo.

Yes, it’s been a hellish 12 months for all of us, but no one has paid a heavier toll than those who lost loved ones.

Tim and Ivy knew early on they were perfect for each other.

After connecting on the MySpace social media platform, they talked on the phone for a couple weeks before finally meeting for dinner and putt-putt one night in June 2008. Friendship quickly turned into romance, and by the following April they were married. Children followed soon after.

“The kindest person I’d ever met — so sincere and generous and loving,” Tim recalls. “She was sweet, always smiling, always helpful, and I just loved talking to her. It always made my day better knowing I was going to get to see her.”

They also shared a strong Christian faith, which became a central focus of their family life.

COVID struck the Dauts on Jan. 6, when Tim tested positive after calling in to work sick with several symptoms. Ivy and Cooper tested positive, too. Ellie tested negative, but was symptomatic within a couple of days. They all quarantined together and gradually got better.

For a week after her diagnosis, she continued to feel worse, and during the night of Jan. 13, she blacked out from dehydration after getting up to use the bathroom. Tim took her to Kernersville Medical Center, watching from the car as hospital personnel put Ivy in a wheelchair and rolled her inside.

She would never leave.

After showing some signs of improvement — to the point that Tim could visit Ivy and the kids could FaceTime her — she began to decline again and had to be moved to intensive care.

On Feb. 2, one of the few days Tim tried to work, Ivy texted him at his office. “I’m scared and I need you,” she wrote.

Tim got there in 15 minutes, where he learned doctors had told Ivy she might need a lung transplant. He tried to calm his crying wife’s nerves, praying with her and telling her, “You’re gonna be OK. God’s in control. We’re gonna get through this.”

Tim believed what he was saying, but he also saw how sick his wife was.

The following day was worse, as Ivy’s breathing became even more labored.

“It was like she’d been running a marathon, but all she was doing was just laying there in the bed,” Tim says. “Her body was fighting so hard to breathe. It was very scary to watch.”

Doctors put Ivy on a BiPAP machine, telling Tim that if it didn’t help, they would have to put her on a ventilator. Tim broke down. Ivy had told him earlier that if she had to be intubated, she feared she wouldn’t recover.

“Yes you are, baby,” he had told her, but he feared the ramifications of the ventilator, too.

Only an hour after trying the BiPAP machine, doctors decided to put Ivy on a ventilator, fearing she would go into cardiac arrest if they didn’t.

“The look of fear in my wife’s eyes is something I’ll never forget,” Tim says. “She couldn’t talk because of the BiPAP. She grabbed her cellphone, her hands shaking like crazy, and sent me a text: ‘I love you. Please take care of our kids.’ ”

“That’s the last text I ever got from her,” he says softly.

The next day, Tim sat with his heavily sedated wife, holding her hand as the ventilator breathed for her. He kissed her and told her how much he loved her. He prayed she would get better. He prayed she could hear him — he just wanted her to know he was there.

That afternoon, when Ellie and Cooper got home from school, he told them, “Mommy is very sick, and they’ve got her on a machine to help her breathe.” They prayed together.

Around 2 p.m. the following day, Feb. 5 — 30 days after testing positive for COVID-19 — Ivy died, surrounded by family and close friends. Tim chose not to get the kids out of school, not wanting them to see their mother on the ventilator. He sat them down after school to break the news.

“Mommy is with Jesus now,” he told them.

The children cried, distraught not only because she had died, but also because they hadn’t gotten to tell her goodbye.

“That was the hardest conversation I’ve ever had to have,” Tim says, “telling my children that Mommy wasn’t coming home.”

Ellie and Cooper are doing better now — not great, but better. At home and at school, they seem to be adapting to their new normal, Tim says.

So is Tim, but the days are still a struggle. Easter Sunday would’ve been their 12th anniversary, and that day will be especially difficult.

Tim’s faith continues to carry him.

“God is 100% in control, and I know my wife is no longer in pain,” he says. “I know where she is. I know I’ll see her again, and when I do, nothing will ever separate us again. But I don’t have her here now, and that’s hard.”