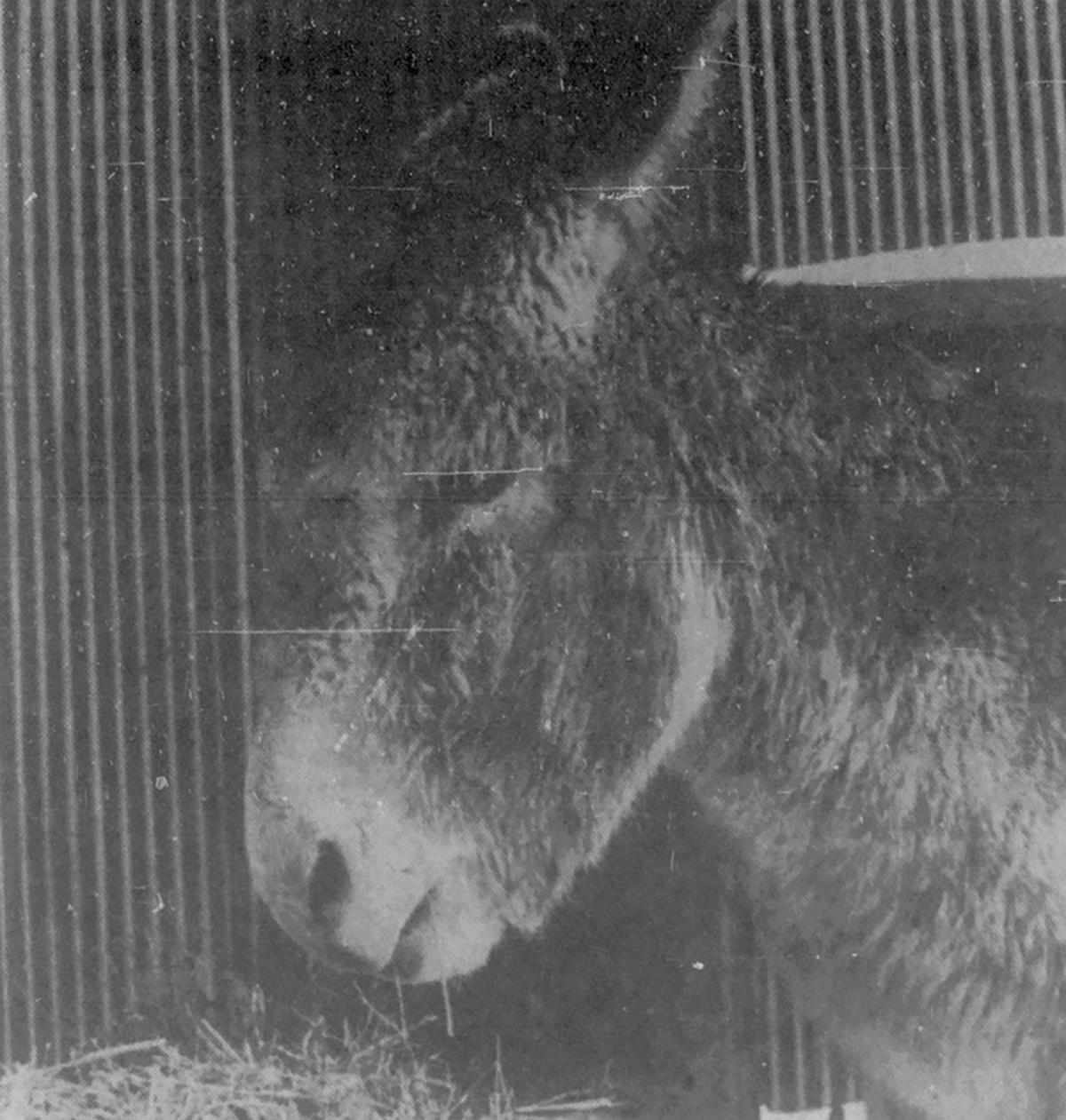 After being rescued by local animal activists, Jack A lived in a much more, um, stable environment, with all the hay and water he could ever want. 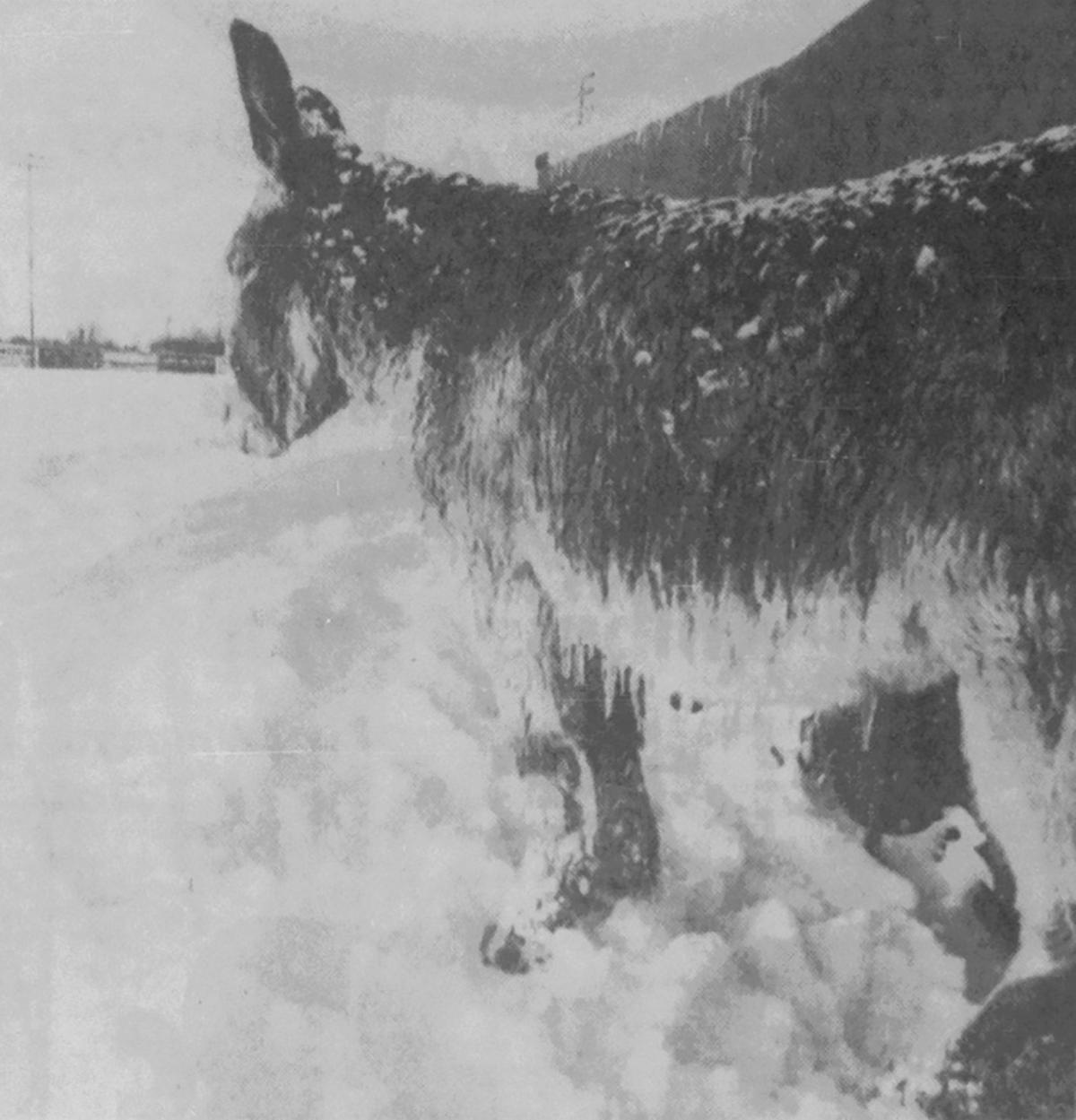 Jack A, the Hi-Toms mascot, was covered in snow and ice after a major snowstorm in January 1966. The donkey is pictured at Thomasville’s Finch Field, where he had no shelter to protect him from the elements.

After being rescued by local animal activists, Jack A lived in a much more, um, stable environment, with all the hay and water he could ever want.

Jack A, the Hi-Toms mascot, was covered in snow and ice after a major snowstorm in January 1966. The donkey is pictured at Thomasville’s Finch Field, where he had no shelter to protect him from the elements.

THOMASVILLE — It’s not often that so-called “dumb animals” make headlines, but when a poor donkey made the front page of a local news section more than half a century ago, the story stirred up a hornets’ nest in the community.

And the villain of the story ended up looking like more of a jackass than the donkey did.

The year was 1966 — January, to be precise — and the donkey was the cleverly named Jack A, the official mascot of the local professional baseball team, the Hi-Toms.

The ball club had purchased Jack A the previous summer for $50, and he was a real hit — pardon the pun — with Hi-Toms fans. Children especially loved feeding sugar cubes to Jack A, and adults always got a good chuckle out of the donkey’s antics, such as the time he brayed loudly when one of the home team boys walloped a homer. Even the opposing teams’ players seemed to enjoy Jack A.

By January, of course, the Hi-Toms’ season was long since over, but Jack A was still making his home at Thomasville’s Finch Field, where he had been given free roam of the confines for the winter. The club’s general manager, Al Alexander, was reportedly bringing hay and water to Jack A every day, and a tarpaulin had been erected to give the animal some shelter.

In late January, Mother Nature dumped 10 inches of snow on the Triad, and a phone call alerted the local newspaper to the plight of poor Jack A. Two young girls playing in the snow near Finch Field had found the donkey, nearly frozen to death, standing on the snow-covered field with no food, water or shelter. He had about two inches of snow on his back, and his coat was matted with icicles.

A photo of Jack A appeared in the next day’s newspaper, along with a story explaining his predicament. Even though some concerned adults had scraped some of the ice from his body, the sub-freezing temperatures made it difficult to get it all. The story speculated Jack A might have a respiratory infection, too.

Alexander, the team’s general manager, could not be found, even when the Thomasville Police Department got involved. Meanwhile, though, the newspaper had no trouble finding representatives of the Guilford County Humane Society, who were threatening legal action to make sure the donkey received the medical attention it needed.

“It’s awful that grown people would let a dumb animal stay in a place with no shelter, food or water,” one representative, Mrs. Matt Wall of High Point, said. “They ought to be arrested.”

Nobody was arrested, but thanks to the hard-nosed compassion of the humane society representatives Jack A soon found himself in high cotton.

“With the grim determination of a modern-day Carrie Nation, the ladies of the humane society made a cause celebre out of ol’ Jack A,” the local newspaper reported in a follow-up story.

Here’s what happened: When Alexander was finally located, he apparently got an earful from the humane society, including an ultimatum to get the donkey some medical attention or else.

Alexander got the message, but he also tried to get out of the public doghouse by pulling a carefully prearranged publicity stunt. With a battery of local news and TV photographers watching, Alexander attempted to register Jack A at the old Sheraton Motel near Thomasville. When the donkey was denied a room — some nonsense about “state health laws” — Alexander led his team’s mascot back to his truck and drove him to a nearby stable, where he could be warm and dry, and have all the hay and water he wanted.

Confidentially, the humane society women probably wished Alexander could’ve stayed at the stable, too, considering what a jackass they thought he’d been.

At any rate, the newspaper ran another photo of Jack A the next day, this time showing how much better he looked, and the furor melted away with the snow. By March, the newspaper was reporting that Jack A “is growing fat and sassy and is ready for spring training.”

It’s not known what kind of season Jack A had, but just between us, it had to be better than winter.