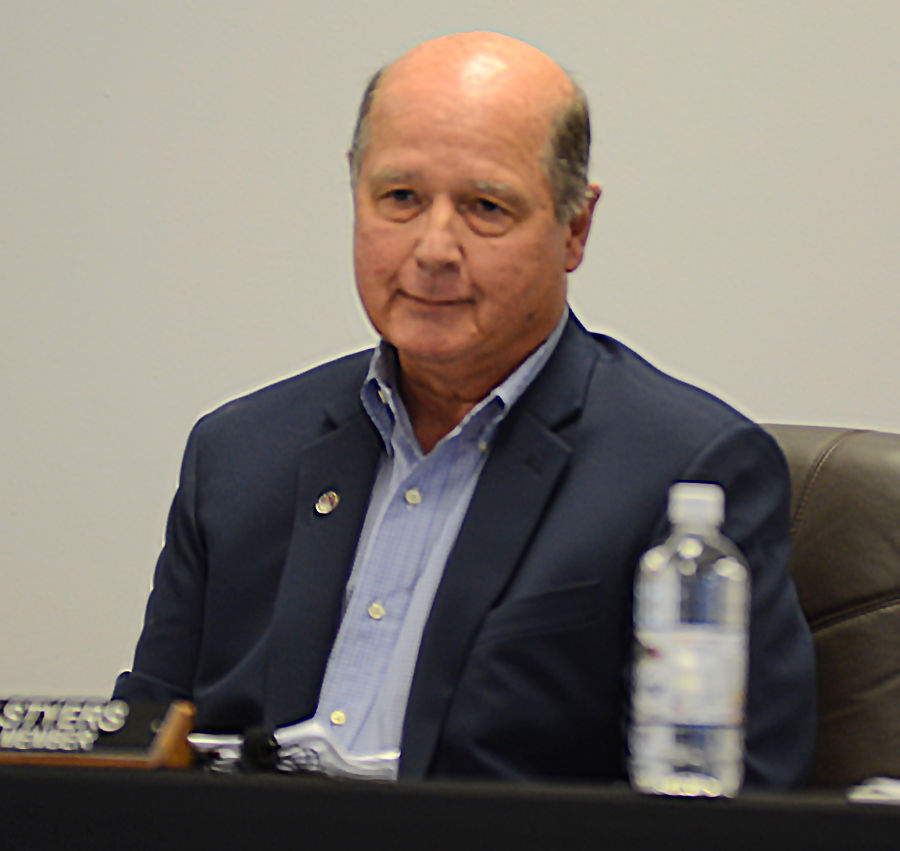 Scott Styers said his final goodbyes to those in attendance at the regular June meeting of Thomasville City Council. Styers announced his resignation after more than 13 years in office.

Mayor Raleigh York Jr., left, and Councilwoman Jane Murphy, right, congratulate Councilman Scott Styers with a round of applause for his years of service.

Scott Styers said his final goodbyes to those in attendance at the regular June meeting of Thomasville City Council. Styers announced his resignation after more than 13 years in office.

Mayor Raleigh York Jr., left, and Councilwoman Jane Murphy, right, congratulate Councilman Scott Styers with a round of applause for his years of service.

THOMASVILLE — One of Thomasville’s two longest-tenured city council members announced at this week’s regular June meeting of council that he would resign after nearly 14 years of service as a local government official.

Effective Wednesday, Scott Styers will cede his seat to Pat Shelton, who joined Styers as freshmen on council in 2007, along with sitting Councilman Neal Grimes. Shelton was appointed to Styers’ soon-to-be-vacant seat by council, which is endowed by state law with the right to appoint replacements for the remainder of vacant terms.

Styers presented his intention to resign to members of council Monday, citing increased workload and the desire to spend more time with family.

“I spent 14 years on this council, almost, and that’s almost a third of my adult life,” Styers said at Monday’s regular meeting. “I’ve had the pleasure of serving with the youngest council person ever elected in the city of Thomasville at the age of 23 [Hunter Thrift] and the oldest council member [Joe Leonard], in his mid-80s. I’ve had the pleasure of serving with two of the best city managers in the state of North Carolina, Kelly Craver and Michael Brandt; two of the best city attorneys, Paul Mitchell and Misti Whitman; and two of the best mayors, Joe Bennett and Raleigh York.

“I’m going to miss it, and I appreciate all of your support, but it’s time.”

In discussing the departure of the man he called a friend and confidant, Mayor Raleigh York Jr. described the service Styers provided as impressive in nature. He recalled encouraging Styers to run for council 14 years ago when then-Councilman Dwight Cornelison decided not to run for reelection.

“I’ve been contemplating how to address this with what I consider one of my really good friends,” York said. “Scott is well known throughout the city, and Scott doesn’t do anything halfway. If somebody goes the extra mile that I’ve ever served with, it’s Scott Styers. He does that. He and I have collaborated on some big issues for our city. … Those things, you don’t forget. Politics is politics. People vote, maybe sometimes, the way you don’t always think they should. … But sometimes you have those controversial votes, and you have to make the decision that you think is the right one at the time, and Scott’s always done that.

“If anybody has ever supported me in what I’ve done here, it’s been Scott Styers.”

City Manager Kelly Craver said that he was proud and honored of Styers, whom he considers one of his best friends. Given an opportunity to speak at the end of Monday’s meeting, the former city manager, who retired at the end of last year, recounted the years of service that overlapped with Styers.

“I’ve had thousands of hours of conversation with Scott Styers,” Craver said. “We didn’t always agree on everything, but we debated things in the best way possible, in the most civil manner possible, and found ways to do the right thing. That was always the intent of everybody I worked with on council, was that we were going to do the right thing, but Scott exemplified that. He did the work, and he continued to do the work, and he’s done the work until the very last moment.”

For more than a decade, Shelton, Grimes, Styers and York made up one-half of Thomasville’s governing body. The beginning of their tenure came during an era of the city’s history marked by its rebound from economic crisis. Enduring a baptism by fire in their first term as council members, Shelton, Grimes and Styers came aboard at the peak of a recession that left the city reeling from the loss of its furniture industry.

Amid that backdrop, Thomasville’s leaders stabilized its finances, began a revitalization of its downtown and approved tax increases that are currently funding improvements to parks and recreation, as well as a new police headquarters.

Styers gave verbal support to the decision by council to appoint Shelton to his seat. She will serve out the remainder of his term, which expires December 2021. Shelton is expected to be sworn in on July 1 after she received five votes to appoint her to the seat. Councilman Joe Leonard cast the dissenting vote.

During his tenure, Styers has championed the attraction of new businesses and the provision of financial support, incentives and grants to boost growth and expansion of local businesses. Styers helped stabilize the city’s financial position; oversaw the renovation of Central Recreation Center; initiated plans for a new aquatic center; and had a hand in hiring a new city manager and city attorney.