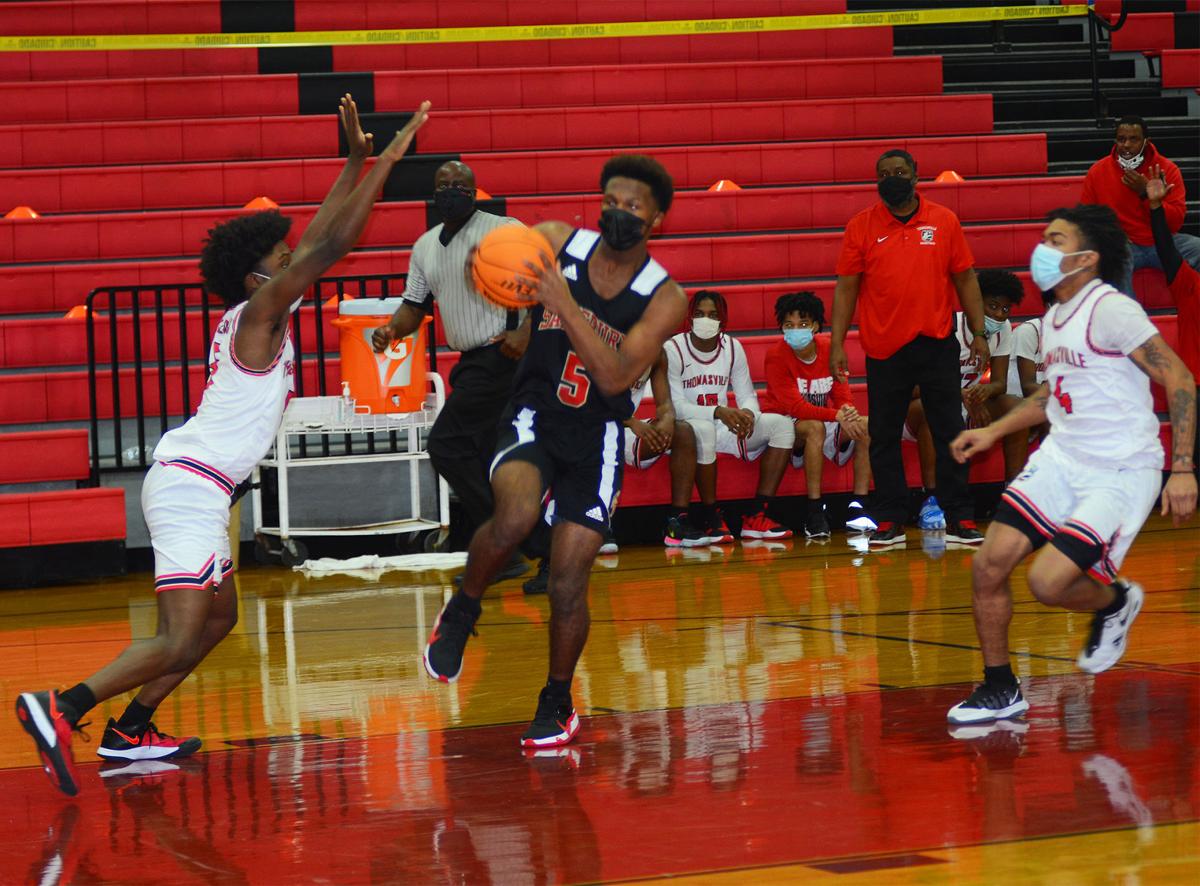 Salisbury’s Mike Geter drives into the lane as Lymeake Washington follows in pursuit. 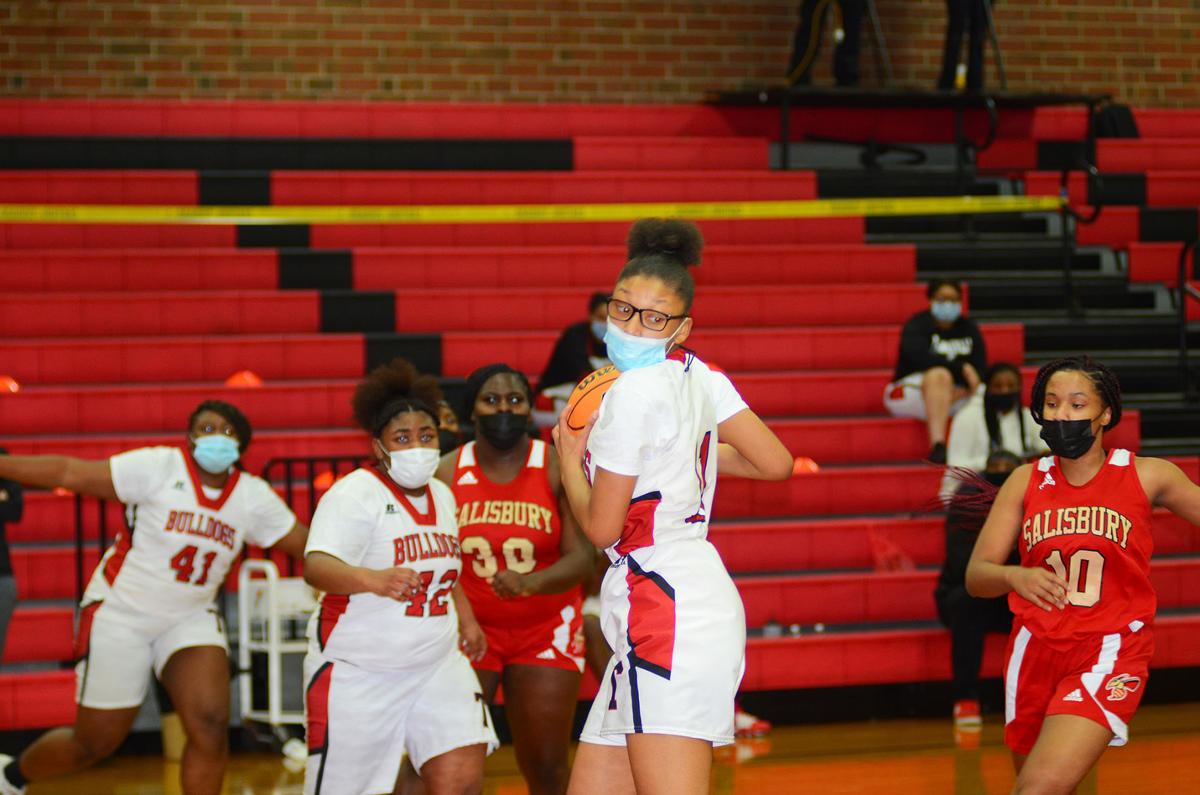 Laila Johnson comes down with a rebound in Friday’s contest with Salisbury. 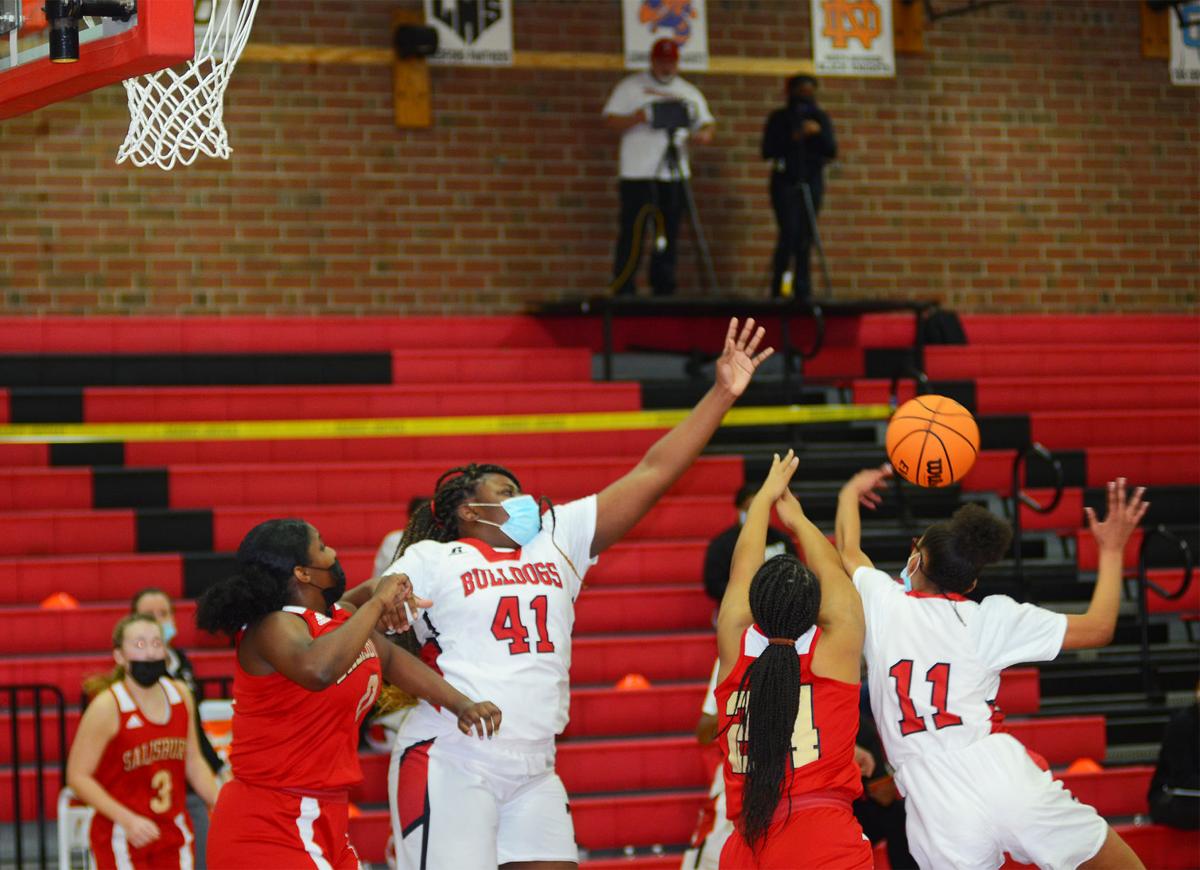 Laila Johnson and Faith Thompson battle for a loose ball in Friday’s tilt with Salisbury. 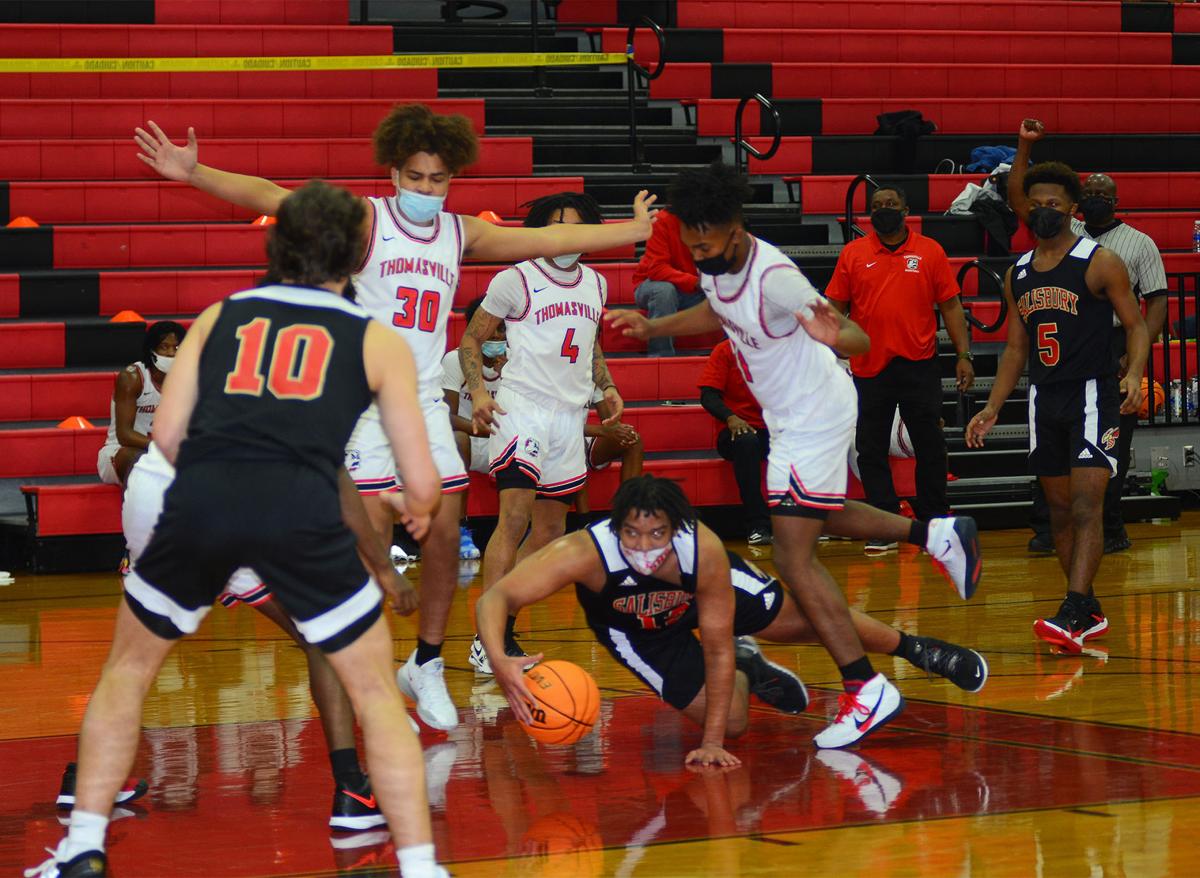 Salisbury’s Cameron Stout dives on the floor after a loose ball between several Bulldog defenders.

Salisbury’s Mike Geter drives into the lane as Lymeake Washington follows in pursuit.

Laila Johnson comes down with a rebound in Friday’s contest with Salisbury.

Laila Johnson and Faith Thompson battle for a loose ball in Friday’s tilt with Salisbury.

Salisbury’s Cameron Stout dives on the floor after a loose ball between several Bulldog defenders.

THOMASVILLE — A second-half deluge powered Salisbury’s girls to a 63-28 win over Thomasville on Friday.

In the Central Carolina 2-A Conference opener for both teams, the Hornets built a narrow early margin in the opening frame, gradually pulling away in the first half before ultimately blowing things open in the third and fourth quarters. In the early going this season, teams have found it difficult to find their sea legs following a long layoff due to the COVID-19 pandemic.

Teams with significant depth to their rosters from top to bottom have had the advantage in an era of masked action on the hardwood.

“First of all, I think Coach Brice does a tremendous job at Salisbury,” Bulldogs coach Ann Ferguson said. “She’s had my vote for conference coach of the year. They have such a deep bench, and they really don’t fall off talent-wise when you get to that second unit. This is our second game of the year, and we’re just getting into game shape.”

That bore itself out as the Bulldogs trailed only 13-9 at the end of one period. The Hornets then extended the edge to 19-11 nearly two minutes into the second quarter, forcing a timeout by Ferguson, who attempted to settle a group that was seemingly out of sorts. Out of the timeout, however, Thomasville turned the ball over and gave up another easy score to make the lead 10.

The spread grew to 15 by halftime, when Salisbury held a 34-19 advantage.

In the second half, the Hornets put the clamp down on Thomasville defensively. The visitors held the Bulldogs to three points in the third and nine for the entire half.

“When you play Salisbury, there is a level of physicality to the game you have to be ready for,” Ferguson said. “They’re really well-coached, I think they did a great job and I think they just wore us out.”

Kyla Bryant scored 17 to lead the Hornets. Icesis Nwafor and Makayla Noble scored 10 each. Shakira Little had 10 to lead Thomasville.

In the boys game, Thomasville was dispatched by the Hornets in a 63-42 final. Salisbury built a double-digit lead in the first half and never relinquished it.

Leading 34-24 at the half, the Hornets (1-3, 1-0) appeared to bring a level of intensity that the Bulldogs couldn’t match after the break. Each run Thomasville made was wiped out by a series of scoring barrages.

The advantage grew to 17 with 10 minutes left to play, and the visitors secured it in the fourth. Thomasville coach Johnathan Gladden alluded after the game to the uphill struggle each group has faced in the wake of a pandemic, which forces players to wear masks throughout the games.

“I think some of us are still adjusting,” Gladden said. “I do see a lot of fatigue. For me, personally, I try to play them at least nine deep in spots, sometimes 10 deep. Three or four minutes of hard running and they’re gassed. It’s not just us. I think everybody is behind.”

Malcolm Knight scored 13 for the Bulldogs.

Turnovers plagued the home team, which led to run outs for the Hornets. Adding to the frustration was the fact Thomasville couldn’t get shots to fall with any regularity.

“I just think they beat us to the punch in every facet of the game,” Gladden said. “We’ve got to get back to the drawing board, fix some things, tweak some things and just come back ready to play.”