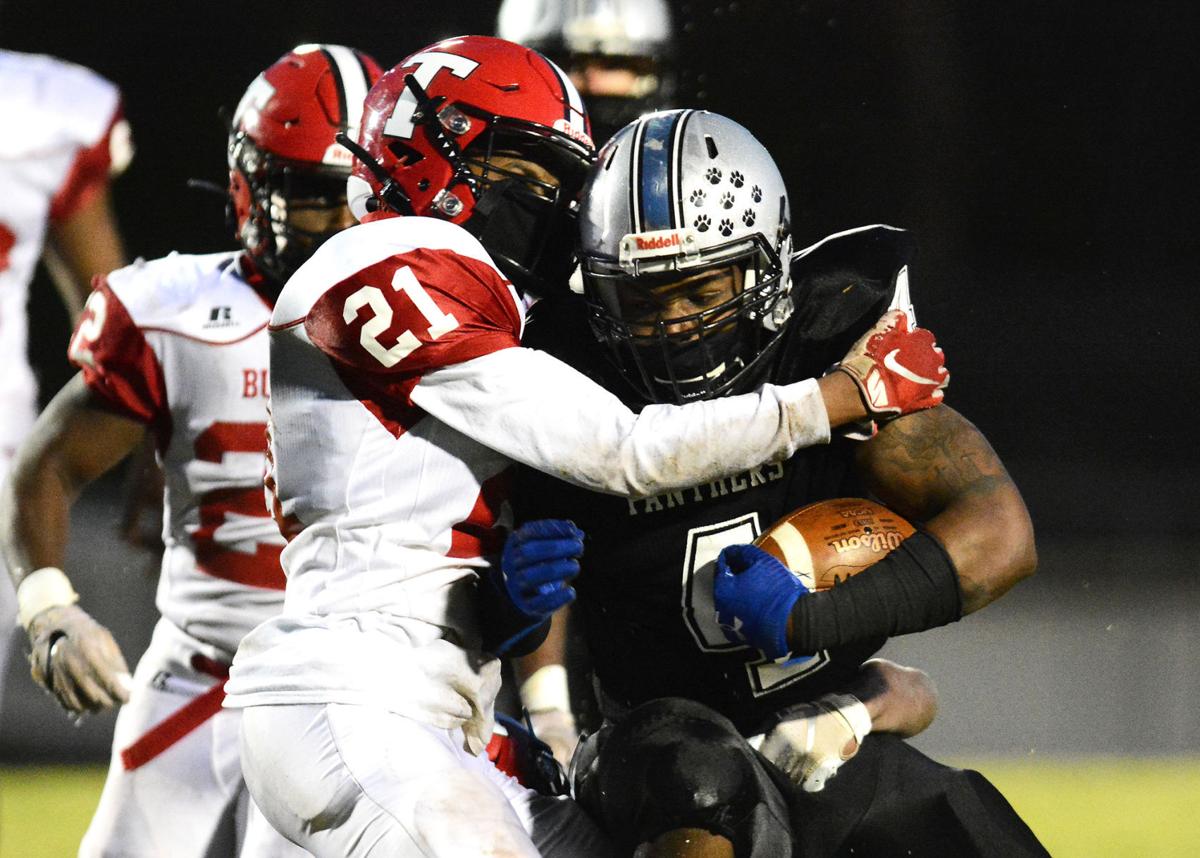 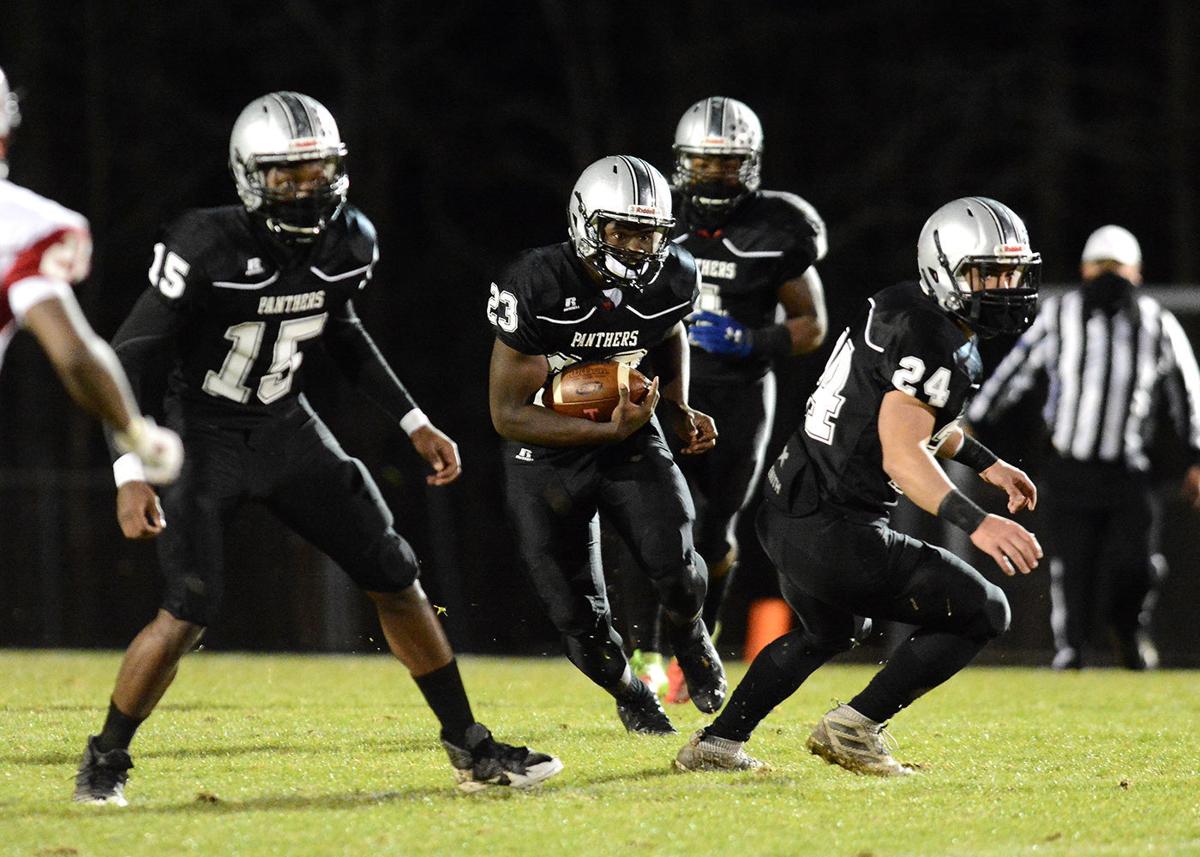 Ledford’s Jayden Brewer runs with the ball during Friday’s game against Thomasville at Ledford. 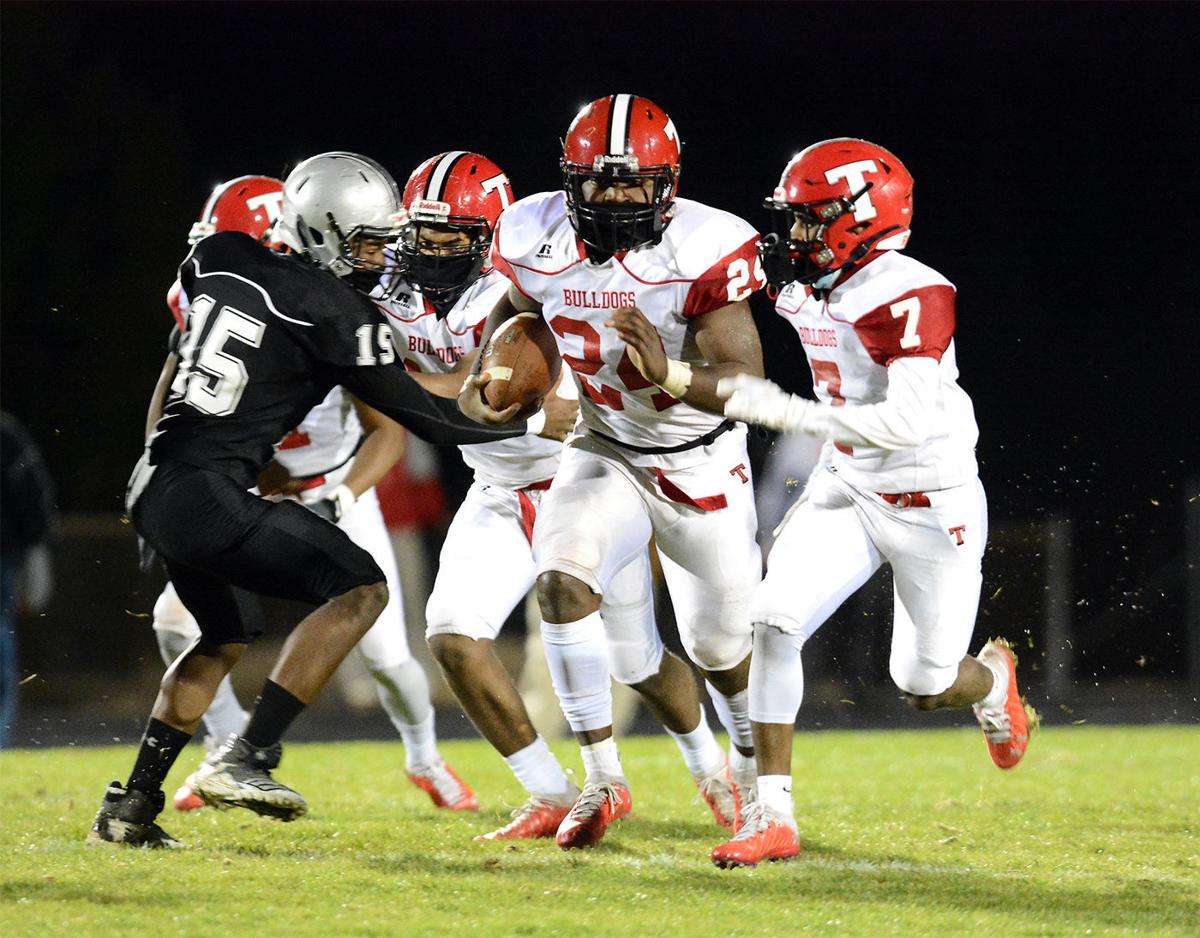 Thomasville’s Jabril Carolina, center, breaks free for a touchdown on a kickoff return during the game against Ledford at Ledford.

Ledford’s Jayden Brewer runs with the ball during Friday’s game against Thomasville at Ledford.

Thomasville’s Jabril Carolina, center, breaks free for a touchdown on a kickoff return during the game against Ledford at Ledford.

WALLBURG — Ledford’s defense made a game-winning push after getting pushed around.

Leading 46-44, the middle of the Panthers formation stuffed Thomasville’s straight-ahead run on a two-point conversion try to extend overtime, delivering a Homecoming victory Friday in a wild Central Carolina 2A Conference game that included the scoreboard going out in the first half

and the Bulldogs rallying from a 30-6 deficit in the second half.

Ledford got the ball first for the overtime period, in which both teams began at the 10-yard line and had four downs to score. Panther quarterback Nathan Carr, who ran seven yards for a touchdown, his third rushing touchdown on the night in addition to one passing, and then swept into the endzone for the two-point conversion.

A five-yard sack and two incomplete passes pushed Thomasville to fourth down on its possession, but quarterback Landon Johnson hit Lymeake Washington between two defenders for a 15-yard touchdown pass that brought the Bulldogs within two.

For the two-point conversion from the 2, Bulldog coach Kevin Gillespie decided to turn to one of his strengths, giving the ball to running back Jabril Carolina in the closing seconds of regulation to help force overtime. Both were set up by Carolina’s power runs inside the Ledford 10.

On the final play it was different, as a group of Ledford defenders met Carolina and shoved him back.

Panther coach Chris Adams said they were looking for Carolina to carry the ball.

“You know, we’ve got to stop the run,” Adams said. “They threw a nice post pass for the touchdown. But we’re going to sell out at that point knowing how they had played football to that point, that there was a good chance that 24 (Carolina) was going to get the ball. You take a chance and if it works, you look great and sometimes, if it doesn’t work, you don’t look so good and you keep playing. But the kids stepped up and the defensive line got a good surge there, the linebackers and secondary. We were able to get a good push.”

Defensive end Anthony Walls was in the middle of the push and also led the celebration as the Panthers ran off the field.

“Corey Cranford was in there, Anthony, our linebackers Sal Leocata and Brandon Martinez were also in the mix, Owen Finley was coming from the free safety position,” Adams said. “It was one of the deals where we’re going to bring the souse and we guessed right.”

Nic Morgan, a defensive back, was also part of the push.

“We were expecting them to run it,” Morgan said. “They were so close to the endzone, we didn’t think they would pass it. I saw a hole open and just attacked.”

Gillespie had no regrets about giving the ball to Carolina, who gained a total of 84 yards, the majority of it on short runs.

“That’s what we had to do,” Gillespie said of the two-point try. “We’ve have to do what our kids can do and that’s what we can do. That’s what we’ve worked on. It just didn’t work out this time.”

Carr weaved around two defenders on a gap read on the way to the overtime touchdown run and added what proved to be the winning two-point conversion on a sweep. He finished with 45 yards rushing and 130 passing, 51 of them on a touchdown catch and run by C.J. Compton that put the Panthers up 38-22 early in the fourth quarter.

“The guys trusted me,” Carr said of his overtime heroics. “I put them on my back, I’ll never stop

fighting for them. Those are my brothers. . . They came back on us. We had to find some hope. We had to fight.”

Not long into the third quarter, the prospect of an overtime finish didn’t seem likely with Ledford up 30-6 and having turned three of four Thomasville turnovers into 22 points. The last two of the Thomasville miscues came on the Bulldogs first and second plays from scrimmage in the second half, capped by Compton picking Johnson’s second interception and returning it 52 yards for a touchdown.

At that point, Ledford had held Thomasville 36 yards total offense and the Bulldogs lone score had come on Carolina’s 70-yard touchdown run.

Ledford opened the scoring on the first possession of the game when Carr found the endzone on a 3-yard run. Thomasville fumbled on its fourth play, setting up the Panthers on a 41-yard that ended on Christian Franklin’s 4-yard touchdown run. Carolina responded with his 70-yard kickoff return, which ended the scoring in the first half at 14-6.

On the first play of the second half, Johnson lost the ball when he was sacked trying to pass. Ledford recovered at the Bulldog 28 and Carr scored from the 1 five plays later.

On the first play of the ensuing possession, Compton grabbed Johnson’s pass and returned it 52 yards.

The Bulldogs then put the mistakes behind them and, helped by C.J. Dickerson’s 75-yard kickoff return for a touchdown, dominated the rest of regulation and tied the game in the closing seconds on Carolina’s 1-yard run and a 2-point conversion on a pass to Dickerson..

“My kids showed a lot of heart, I’m proud of them,” Gillespie said. “The four turnovers were a lot of that 30-6. We kept making mistakes. Once we settled down and made a few plays, we got some confidence and started executing and got some momentum. Once we cut out the mistakes, good things happened. You can’t take a good team like Ledford and turn it over to them four times. At one point, they had like 35 offensive plays and we had 11. That’s the difference in the game. But we didn’t give up. We kept pounding and made it interesting at the end. They just made more plays than we did.”

Thomasville scored on its last three offensive possessions in regulation, plus Dickerson’s kickoff. The Bulldogs forced a Carr fumble at the Ledford 36 to set up one short drive and took advantage of a short Ledford punt for another. The Bulldogs mustered 141 yards in the second half.

“We probably got a little overconfident,” Carr said. “We started losing. The guys on the sideline didn’t have any hype in them. We weren’t energized like the rest of the game. We just had to pick it up at the end.”

“Both teams did good things and both did some not so good things,” Adams said. “I’m proud of the kids, cause we’re up and then we’re down. Hats off to Thomasville for coming back and playing hard. But, we found a way to win.”