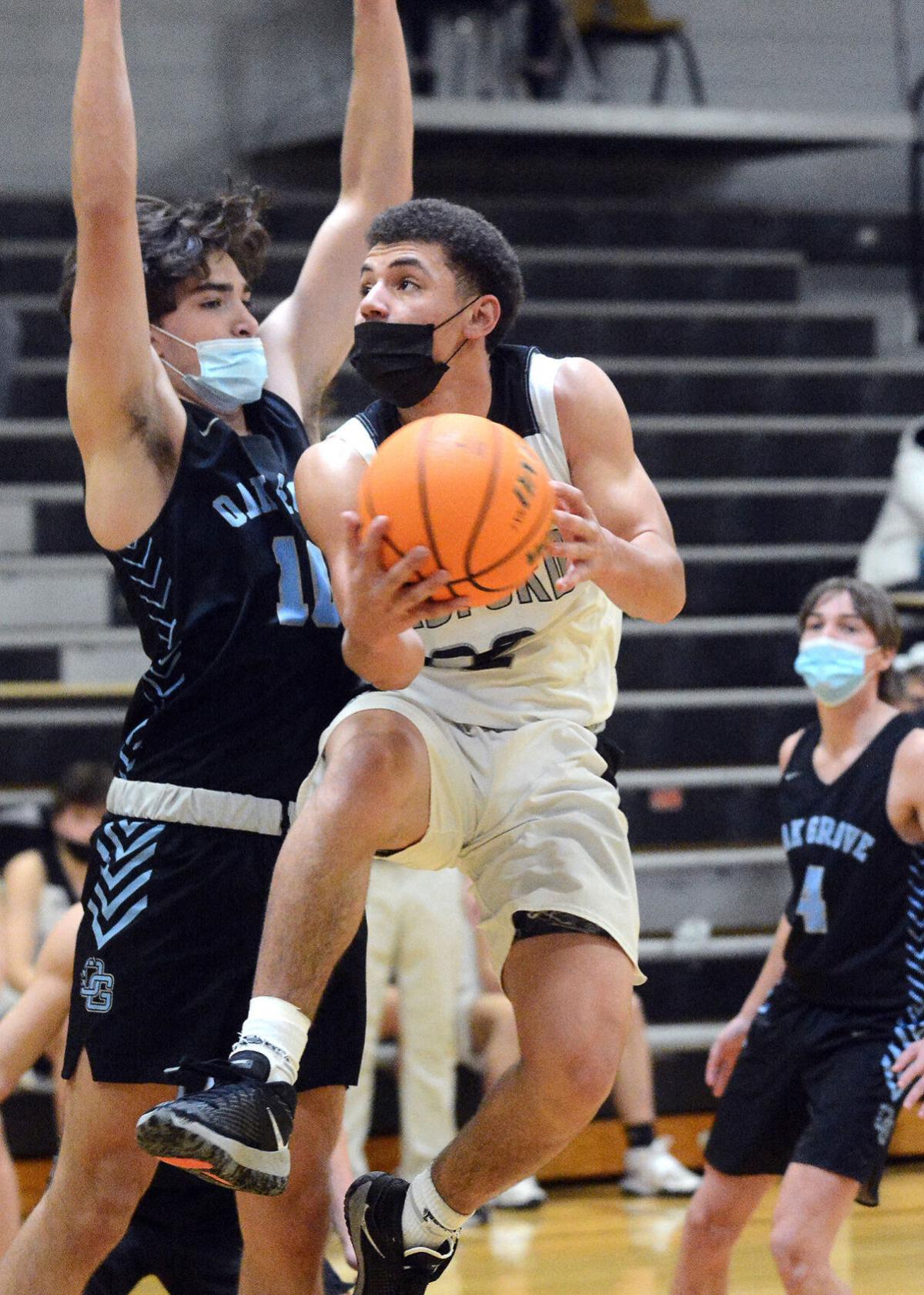 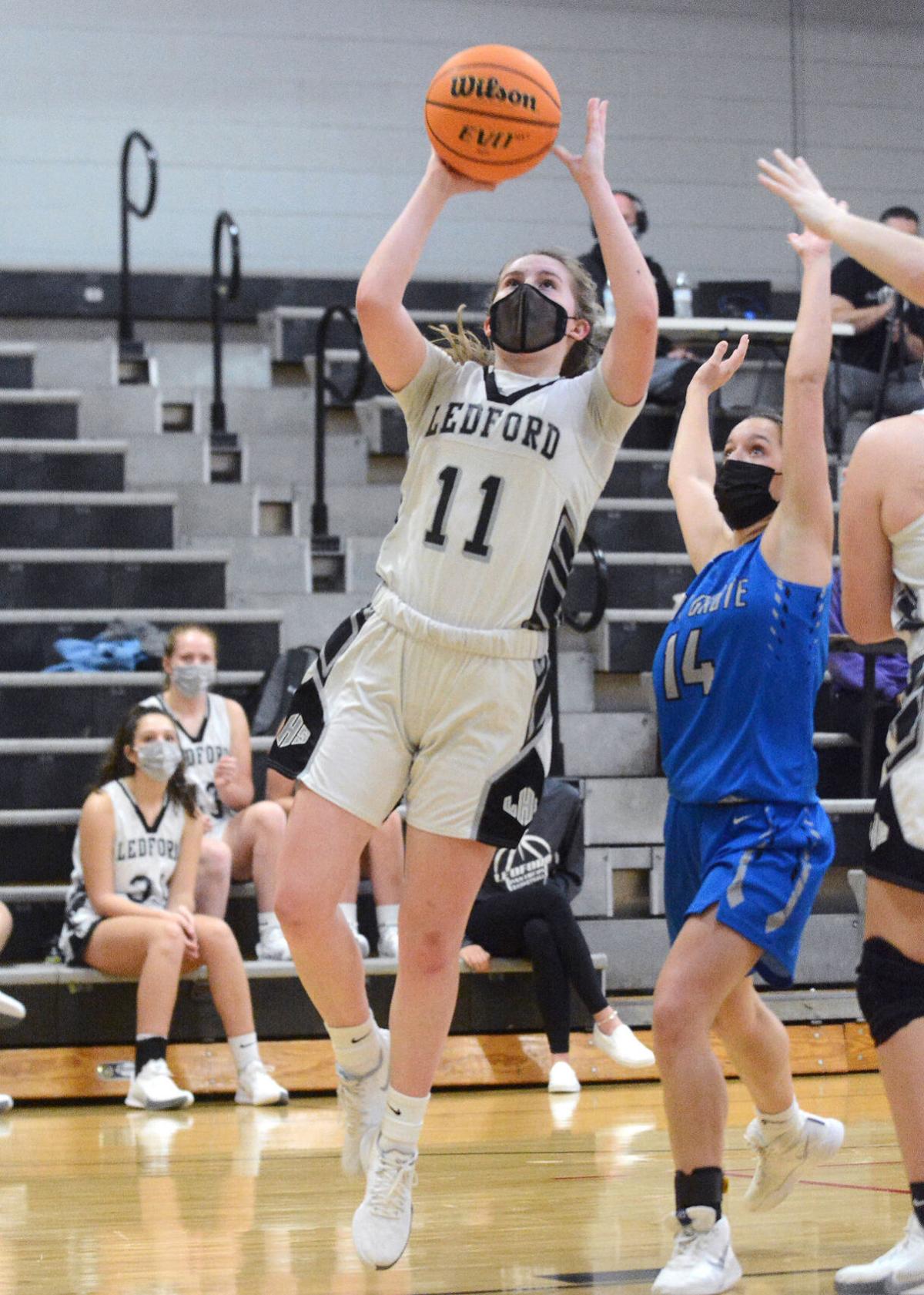 The Panthers, trailing at halftime after a cold first half, made a big run in the third quarter to overtake the Grizzlies and won 59-41 in Central Carolina 2A Conference boys basketball Friday at Ledford.

In the girls game, Ledford overcame a slow start as well, tied the game into halftime and pulled away in the second half to win 50-42.

Before the boys game, both teams honored former Ledford standout Chad Dorrill, who passed away in the fall due to complications with COVID-19. Oak Grove passed the ball into Ledford on the opening possession, and the Panthers took a 10-second violation — recalling Dorrill’s No. 10 jersey number.

“Second half, we really started to trust the things Coach Anderson asks us to do,” said Panthers coach Will Essick, filling in for head coach Jason Anderson. “We finally started trusting that. Tonight’s a big night because we wanted to play together.

“We wanted to play for Chad and trust each other. And in the first half I don’t think we really trusted each other a whole lot. But once we started trusting each other and we got things going, then I think that was evident in that third quarter when we made that run.”

Tyler Partee scored 20 points while Alex Reece added 18 points to lead Ledford (7-2 overall, 5-2 CCC). The Panthers trailed 21-15 at halftime and fell behind eight when the Grizzlies scored to open the second half.

But Ledford, which also got 14 points from Owen Finley, outscored Oak Grove 32-6 over the next eight minutes. It quickly fought its way back into the game and then surged to a double-digit lead, as Partee got to the basket and Reece hit from 3-point range. Suddenly the Panthers led 47-29 with 6:22 left in the game.

“I really think it was us stepping up on defense — we really got to spots,” Essick said. “The shots started falling — we really didn’t have many shots fall in the first half. I think the biggest thing was that we really set down on defense. We worked hard, we trusted each other and everything we’ve got going here. And we were finally able to knock down some shots.”

Ethan Whitaker scored eight points to lead the Grizzlies (3-7, 3-4). Sakori Poole added seven points, followed by Evan Suarez with six points. Oak Grove got within nine with 3:55, but Ledford rebuilt its lead — extending it to 20 in the final minute.

Morgan Harrison scored 23 points while Ashley Limbacher added 11 points to lead Ledford (9-1, 6-1). Averee Atkins followed with six points as the Panthers regrouped after losing to Salisbury and fended off a charge by Oak Grove to catch them for the CCC’s final automatic playoff berth.

“It was kind of tough after taking one on the chin Tuesday against a very, very, very good Salisbury team,” Panthers coach Chris Doby said. “And then have to come and play a high-caliber team in Oak Grove, who last time they were here knocked us out of the conference tournament. So, there were a lot of challenges for these kids — they took the Salisbury loss tough.

“We talked about it yesterday, talked about it today and we’re not going to talk about it anymore. It’s a learning situation. We probably learn more when we lose than when we win. But this sure was a valuable win. I think the girls really decided to get better in the latter part of the first quarter and definitely in the second quarter. And I think our defensive intensity led to freer offense.”

“I think we played really well,” said Harrison, a sophomore guard. “We had probably one of the best games of the season today. We had our ups and downs in the beginning, but we picked it up. We brought each other in, and we started scoring and we kept going.

“I think we had more confidence. I think, even though we got negative, we just heard our coach say we need to be positive more and just brush it off. And I think we did that.”

Zaire Jones scored 19 points to lead Oak Grove (6-3, 4-3). Avery Ray added eight points, followed by Hailey Kidder with five points. The Grizzlies got within four with 2:46 left and within three with 58 seconds left, but couldn’t get closer.