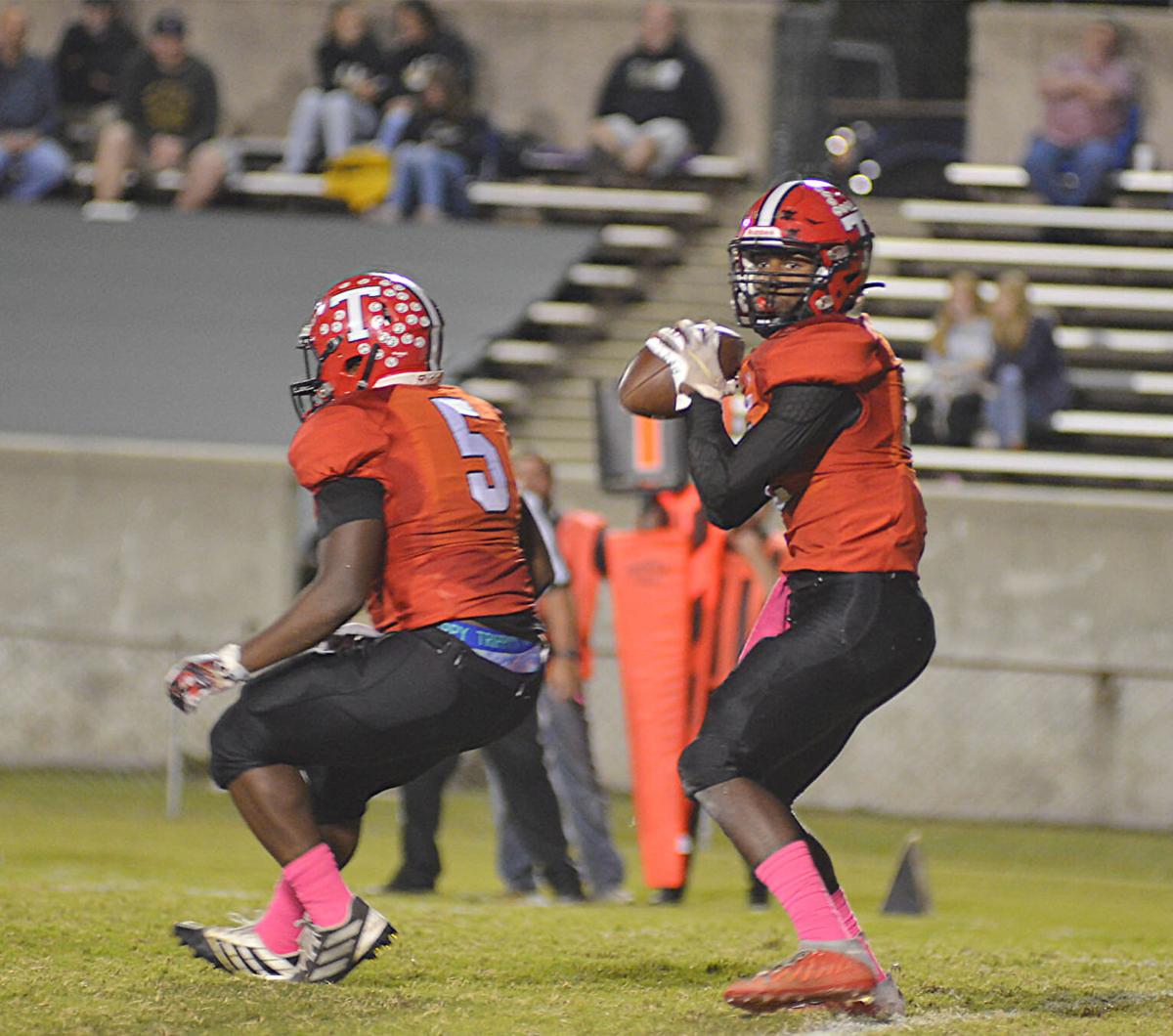 C.J. Dickerson drops back to throw during last week’s game at home versus East Davidson. 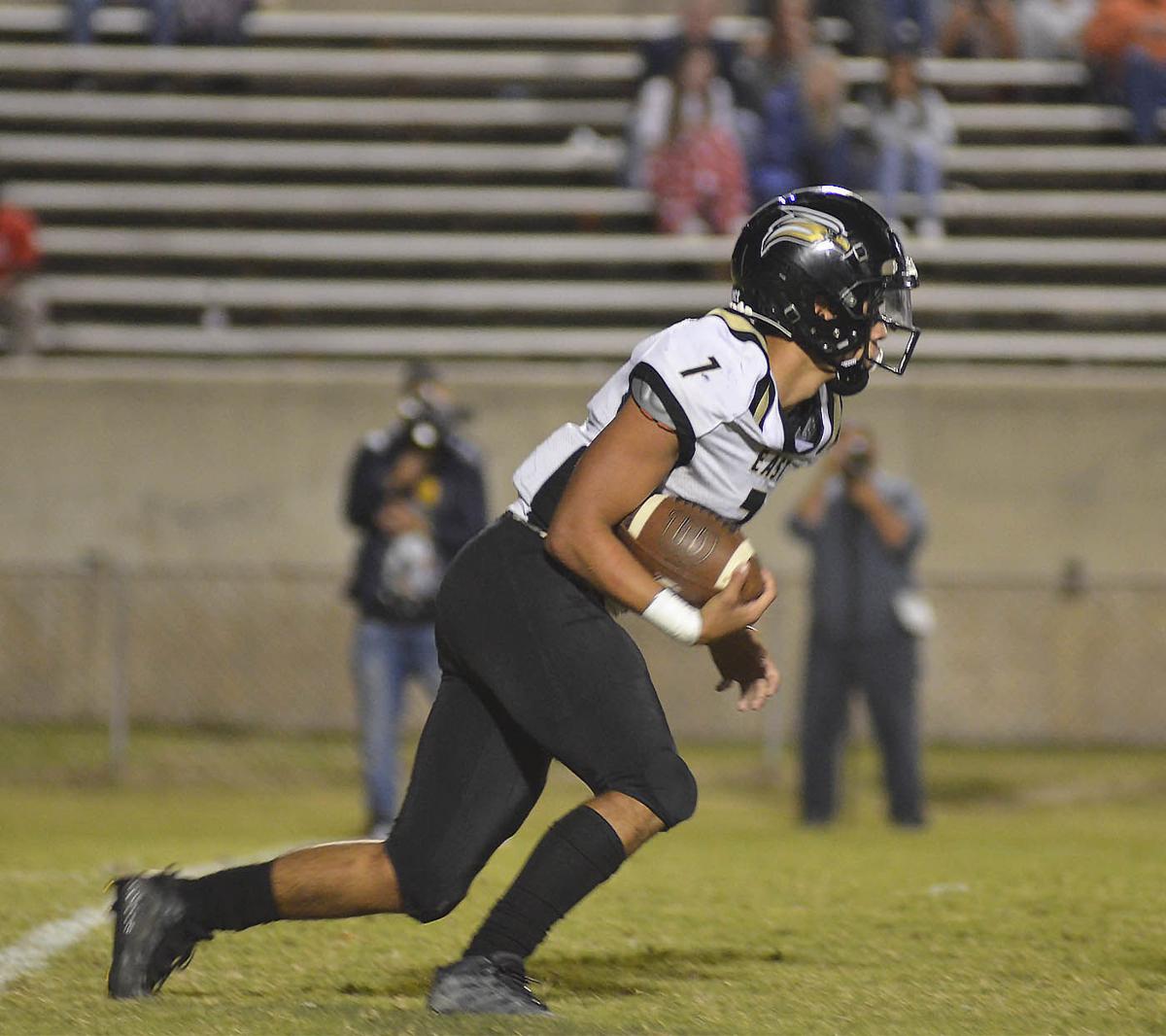 East Davidson’s Brogan Hill runs it up the middle during last week’s 28-21 overtime victory over Thomasville.

C.J. Dickerson drops back to throw during last week’s game at home versus East Davidson.

East Davidson’s Brogan Hill runs it up the middle during last week’s 28-21 overtime victory over Thomasville.

THOMASVILLE — Facing fourth-and-20 with the game on the line, a banged-up C.J. Dickerson was chased from the pocket, attempting to make it to the end zone to extend the game.

There would be no late-game heroics this time for the Bulldogs, however, as East Davidson escorted Dickerson out of bounds on the final play to put finishing touches on a 28-21 overtime victory at Cushwa Stadium. For only the third time in the teams’ head-to-head series, the Golden Eagles topped Thomasville inside the historic venue.

“I grew up watching these guys when I was little,” East coach Vance Hanner said. “My grandfather was a big Thomasville Bulldog fan. You come up here, you see this, you know all this tradition. I’m just so proud of my guys that they didn’t just see a red T and cower down. We were focused and ready to play.”

Hanner has now orchestrated as many victories over Thomasville as he has losses in his eight years as the Eagles’ head coach. Though Thomasville still leads the all-time series 21-4, recent years have seen the Bulldogs’ cross-town rivals grow as a program. A 7-6 road win in 2014 was the first of their four wins, with three since.

On Friday, it didn’t take long for East to prove it came prepared. Josiah Allred took off with his first carry for 75 yards and a touchdown to begin the contest. Eagles’ quarterback Brogan Hill’s rushing touchdowns accounted for the visitors’ other three scores and ultimately provided their final margin of victory.

“They outplayed us,” Bulldogs coach Kevin Gillespie said. “We didn’t play very well. They made plays when they had to, and it came down to the very end. We just didn’t execute. Adversity, it’s a great builder of character. As a group of young men, we have not handled adversity very well since I’ve been here. Now, we have gotten better. … It’s just whoever is next, we’ve got to do what we do. We didn’t do that tonight.”

After Hill’s 10-yard rushing score knotted the contest at 21 midway through the fourth quarter, both teams kept the other off the scoreboard for the remainder of regulation, forcing an overtime. On the first possession of the extra session, East’s offense actually went backwards, netting a loss of one yard before missing a field goal that would have given the ball to Thomasville with a chance to win.

A roughing the kicker call gave East an automatic first down, however, and the Eagles were back in the end zone two plays later, creating a 28-21 advantage. After missing a portion of the fourth quarter with what appeared to be a leg injury, Dickerson re-entered for the second drive of overtime.

Clearly limited by the injury that had him limping late in regulation, Dickerson lost three yards on first down, threw an incomplete pass on second and was sacked on third to set up fourth-and-20. The signal caller attempted to reach the goal line on that final play, but could not get up to full speed and was swarmed by a host of Eagle defenders well short of the end zone.

“I can’t give my defensive guys enough credit — by far the best defensive game that we’ve played all year,” Hanner said. “We did enough on offense to win the game.”

East followed with a three-and-out, then shanked a punt. On the next play from scrimmage, Dickerson made it into the end zone with a 30-yard run, making the score 14-7 in favor of the home team.

Just 16 seconds later, Jalan Sanders picked off a pass and returned it to the opposition’s 2-yard line. Dickerson again hooked up with Washington, this time on a 4-yard touchdown, but the play was nullified by penalty. Thomasville then turned the ball over on downs, denying the Bulldogs a chance to extend their 14-7 lead before the half.

In the second half, Allred again set the tone for East, this time with a 60-yard run that set up a short touchdown run with 6:29 left in the quarter to tie the score. Dickerson responded with a 6-yard touchdown pass to Janhri Luckey. That score put Thomasville back on top, but the team could not muster any additional points, which eventually led to the defeat.

The setback was the first for the Bulldogs (6-2, 3-2) since the team fell to Salisbury in a Week 4 blowout.

“I don’t know how this group is going to respond,” Gillespie said. “I don’t know how they’re going to come out Monday. … From the Salisbury game on, things have been pretty easy. We’ve been able to overcome [mistakes]. We’ve been telling them, ‘There is going to come a point in time when you’re not going to be able to [coast to wins]. You’re going to have to do what we tell you to do.’ And tonight was one of those nights. I am looking forward to seeing how they respond.”

With a game remaining on the schedule for Thomasville, the next opportunity will come in two days when the team travels to Lexington. Regardless of the outcome of that game, the Bulldogs have already clinched a spot in the 1-A state playoffs. East will return home this week to take on West Davidson.

Gillespie is acutely aware of the challenge at hand. A state champion, the head coach is looking forward to seeing whether his team this season possesses the championship mettle to bounce back from a tough defeat.

“I was here in 1991,” Gillespie said. “In 1991, we go over and play the conference championship at North Davidson and we lose. That’s the first game we lost all year. Things had been rolling. And then that game, we lost a heartbreaker kind of like this. Those boys were crying like crazy. Well, that team had some grit. That team stepped up. We didn’t lose another game and we won a state championship.

“Now will this team have that? I don’t know. Time will tell.”