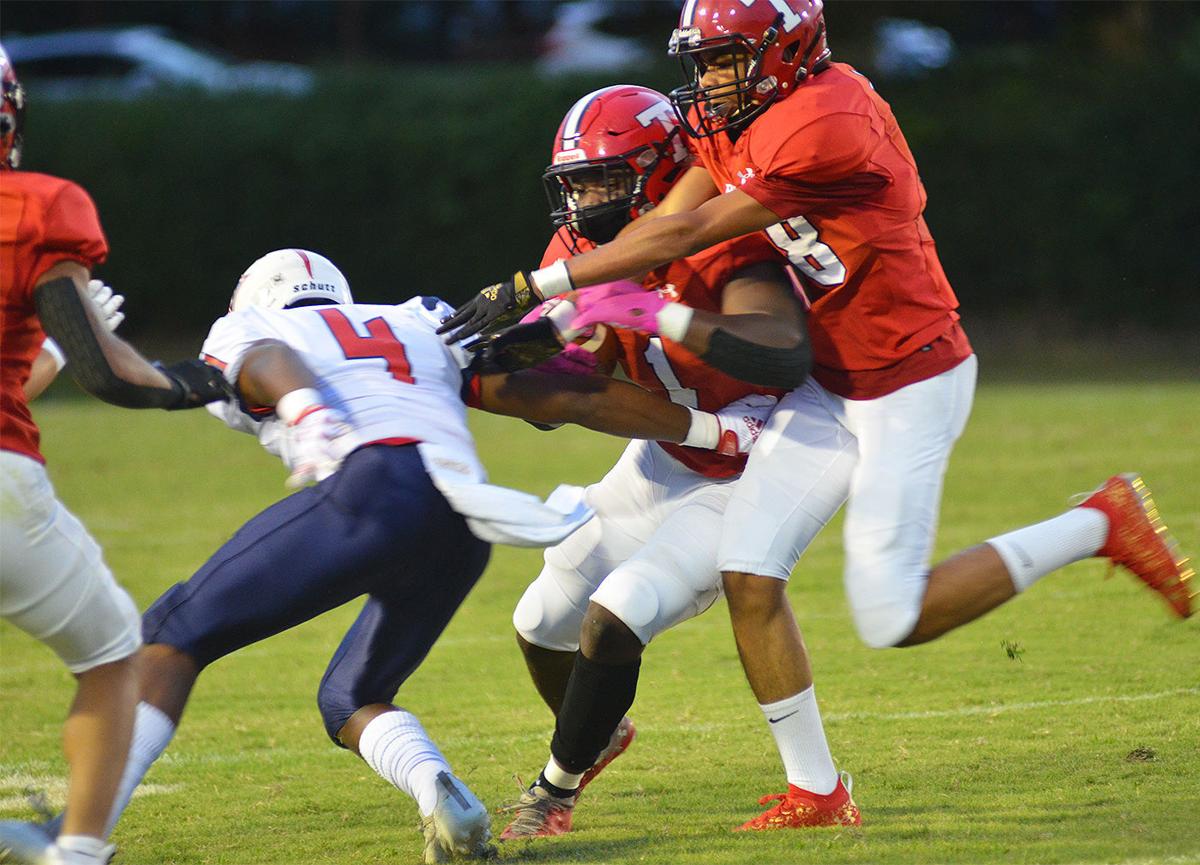 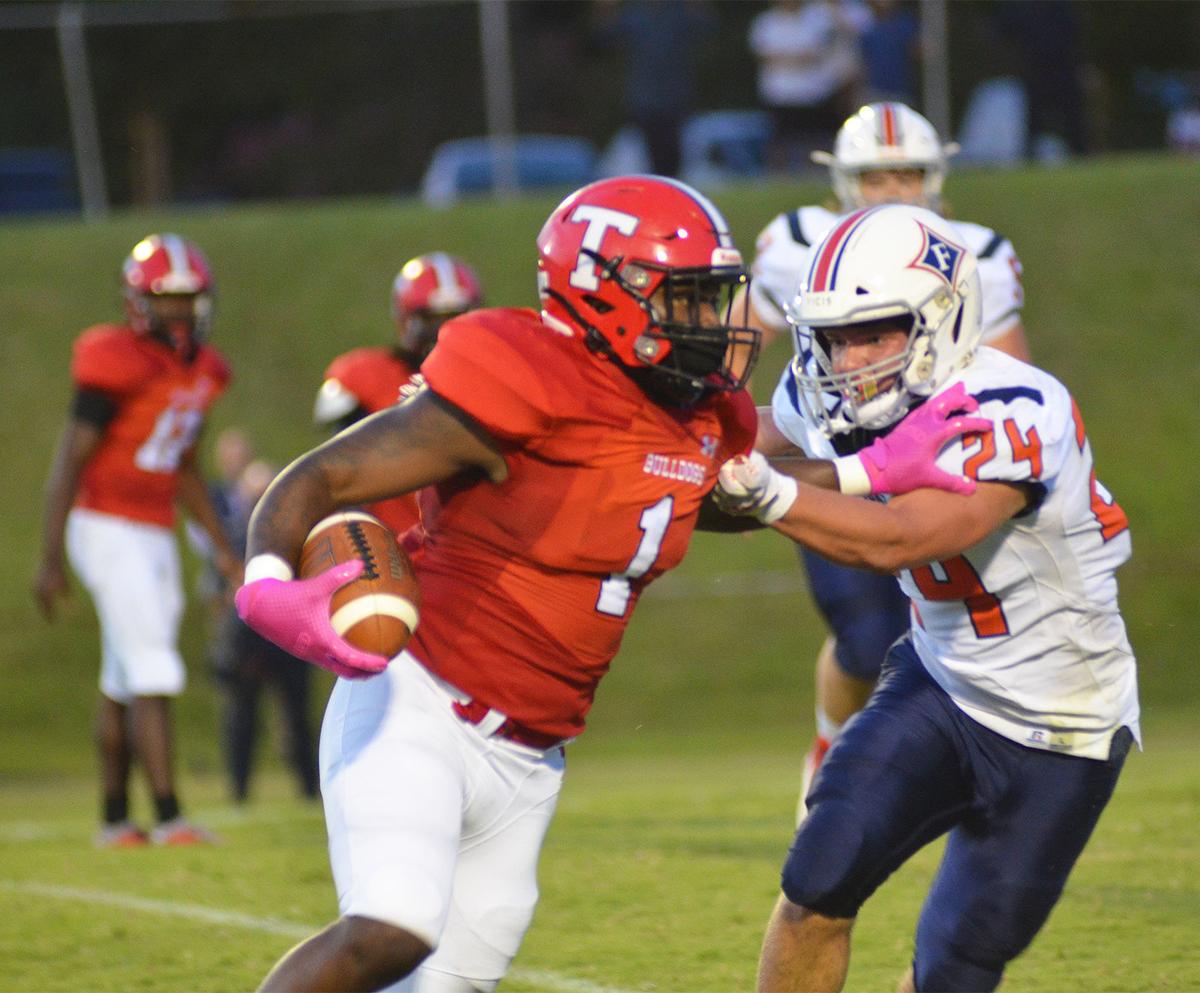 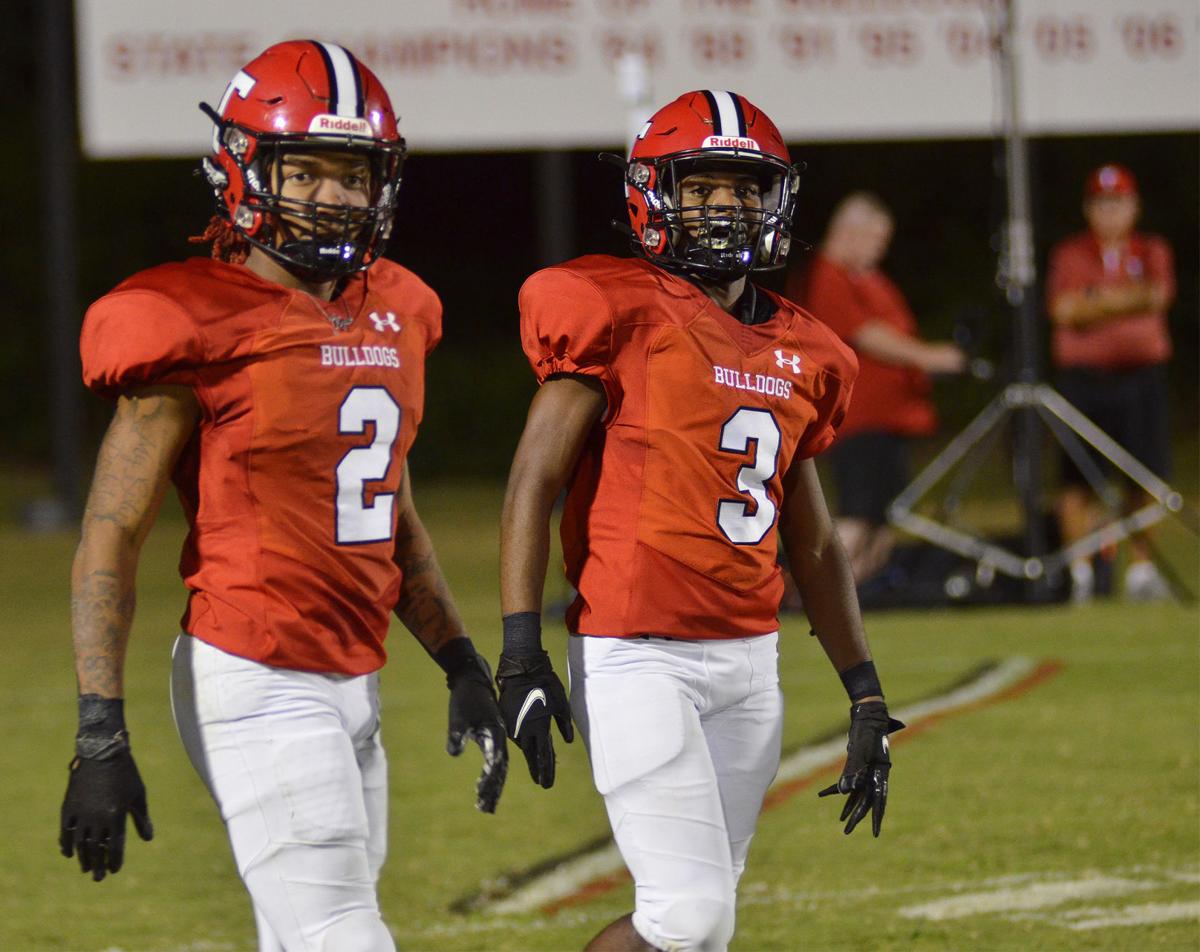 Senior Lymeake Washington (2) and junior Janhri Luckey (3) are two of the playmakers who have triggered a 3-0 start for Thomasville football. 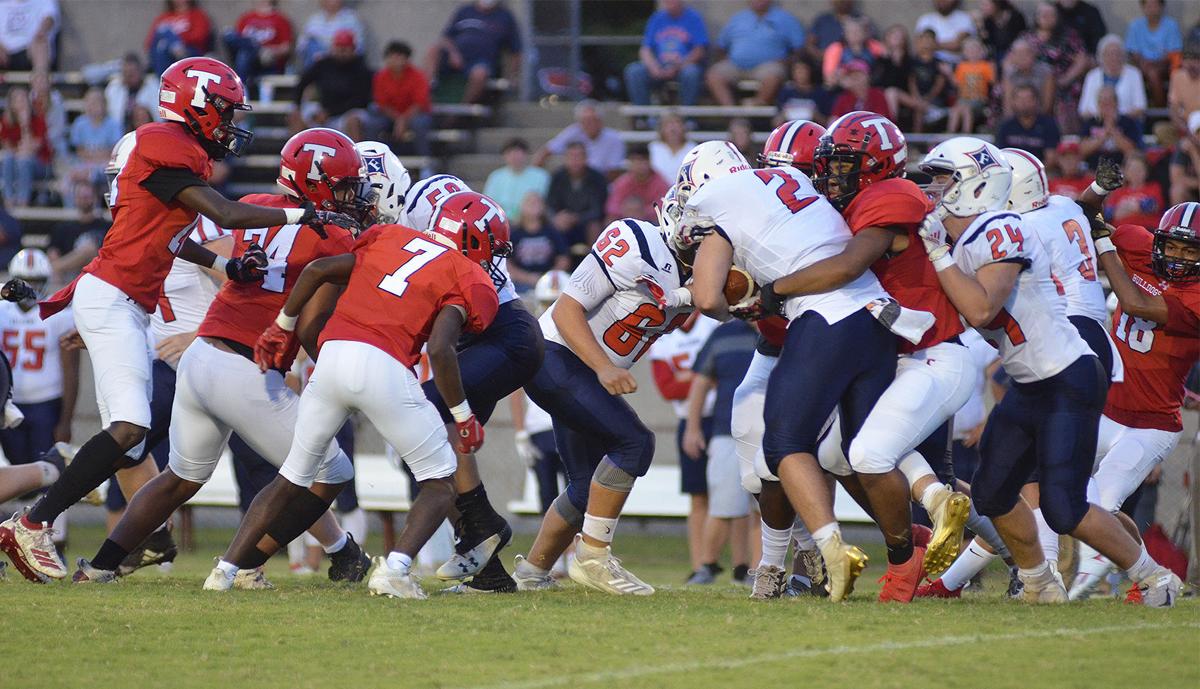 A gang tackle by the Thomasville defense during last week’s game with Forbush takes down a Forbush ball carrier. The Bulldog “D” suppressed a Falcon offense that could not manage a point.

Senior Lymeake Washington (2) and junior Janhri Luckey (3) are two of the playmakers who have triggered a 3-0 start for Thomasville football.

A gang tackle by the Thomasville defense during last week’s game with Forbush takes down a Forbush ball carrier. The Bulldog “D” suppressed a Falcon offense that could not manage a point.

THOMASVILLE — A 3-0 start has Thomasville football enjoying a wave of positive momentum as the Bulldogs prepare to head south for a showdown with the champs.

Fresh off a 2-A state championship in the spring, Salisbury will host Thomasville on Friday in a matchup between unbeaten 1-A/2-A West Conference 33 opponents. Formerly the Central Carolina Conference, the league both teams now share could very well produce a team without a blemish to its record this season.

Much will depend on what happens Friday night.

“We’re going to go to work at this thing,” Bulldogs coach Kevin Gillespie said. “I told them that nonconference is over, and now we’ve got to get ready for the conference. We’ve got the defending 2-A state champ at their place, so it doesn’t get any easier.”

Thomasville ended nonconference play on a high note last week with a 49-0 shutout over Forbush. CJ Dickerson rushed for three touchdowns, Jabrii Carolina had two and the Bulldogs rolled to an absolutely dominant performance.

It was the third such rout in as many games to start the season. Game-breaking plays have become commonplace as Thomasville has racked up 133 points in those first three games. Meanwhile, the defense has pitched two shutouts and nearly had a third if it weren’t for a late touchdown in the Montgomery Central contest in Week 2.

Several red-zone stops kept the scoreless run intact, and when tested, the Bulldogs proved up to the task.

“We’ve got some pretty good players,” Gillespie said. “We’ve got some speed and some size up front, and that’s a good combination. … Our defense would bend, but it wouldn’t break. They just kept stopping them when we needed to.”

Exceptional on offense and defense, Thomasvillle has also provided challenges for opponents in the third phase of the game. An electric punt return for a touchdown by Lymeake Washington with 9:09 remaining in the second quarter was nullified by penalty. One play later, Carolina ran it in from 25 yards out to give Thomasville a 30-0 advantage.

Shamon Smith added a rushing score, and the team is hitting on all cylinders.

“We got stopped one time, and that was down on the 1-yard line,” Gillespie said of his team’s eight possessions. “Other than that, every time we got the ball, we put it in the box. I’m proud about that. … It’s always good when you can score in multiple ways. A lot of guys touched the ball offensively.”

Thomasville will have to bring the same tenacity this week as it seeks to topple one of the state’s best teams. Led by Georgia commit Jalon Walker, who has dominated the pace of play from his linebacker position throughout his high school career, Salisbury has an attacking defense that shut out Thomasville the last time the teams played.

That 28-0 rout came in 2019, long before the Bulldogs’ most recent resurgence was underway. Friday will serve as a measuring stick for how far the team has come.