Sign Up
Log In
Purchase a Subscription
You are the owner of this article.
Edit Article Add New Article
You have permission to edit this article.
Edit
Home
News
Sports
Life
Opinion
Obituaries
Special Sections
e-Edition
Classifieds
Archdale Trinity News
Thomasville Times
Share This
1 of 7 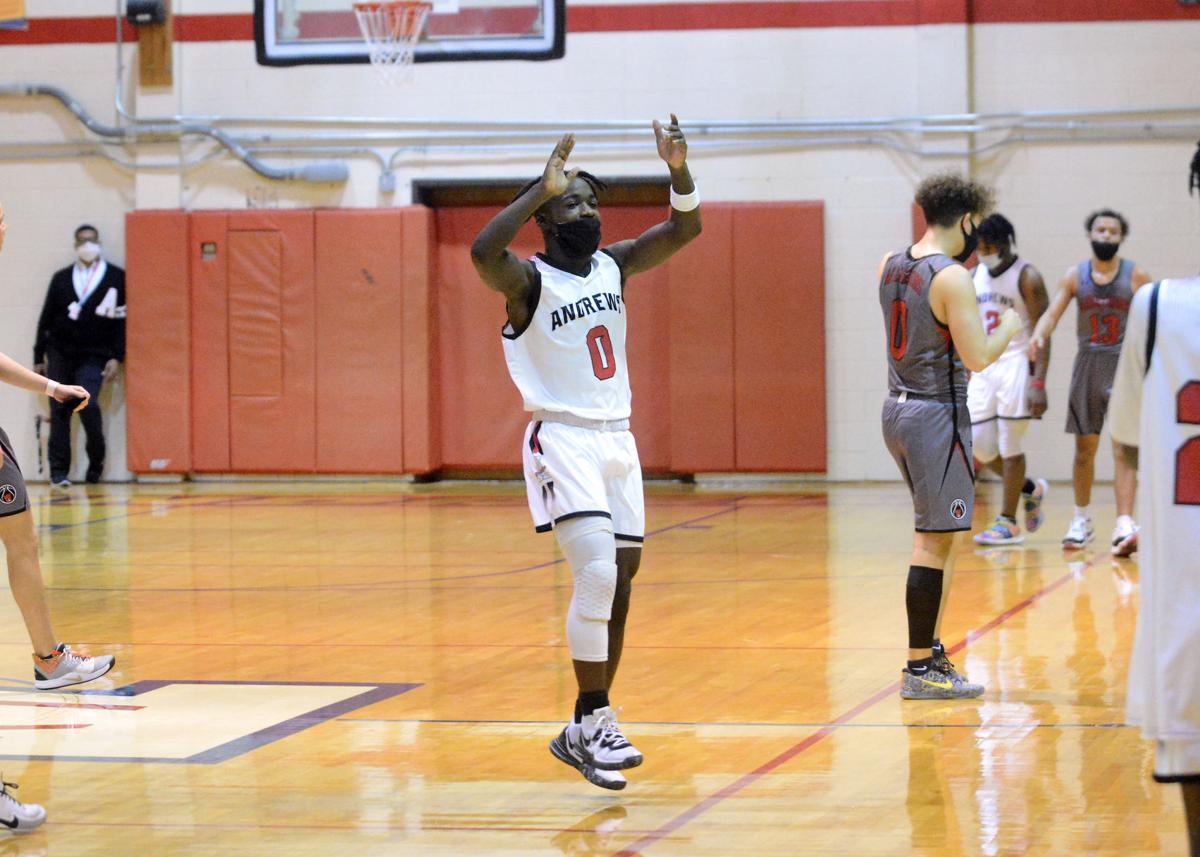 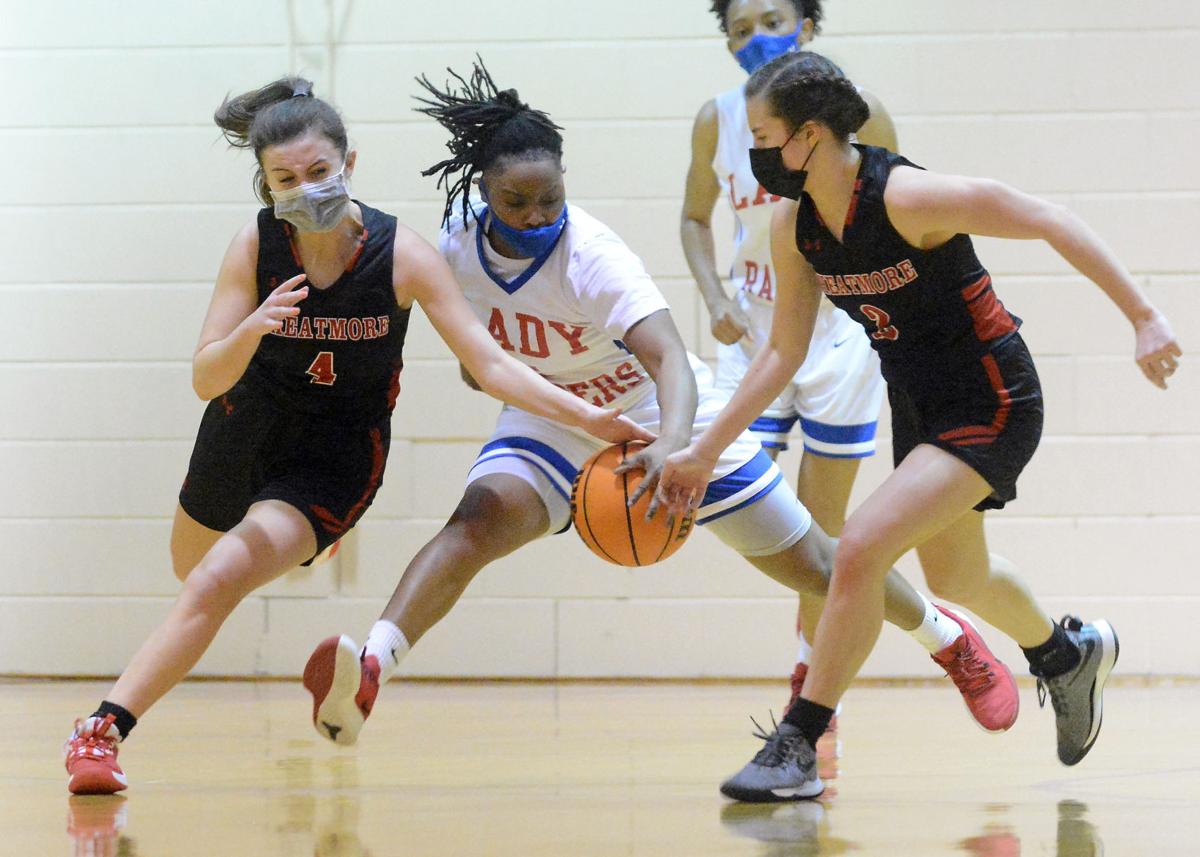 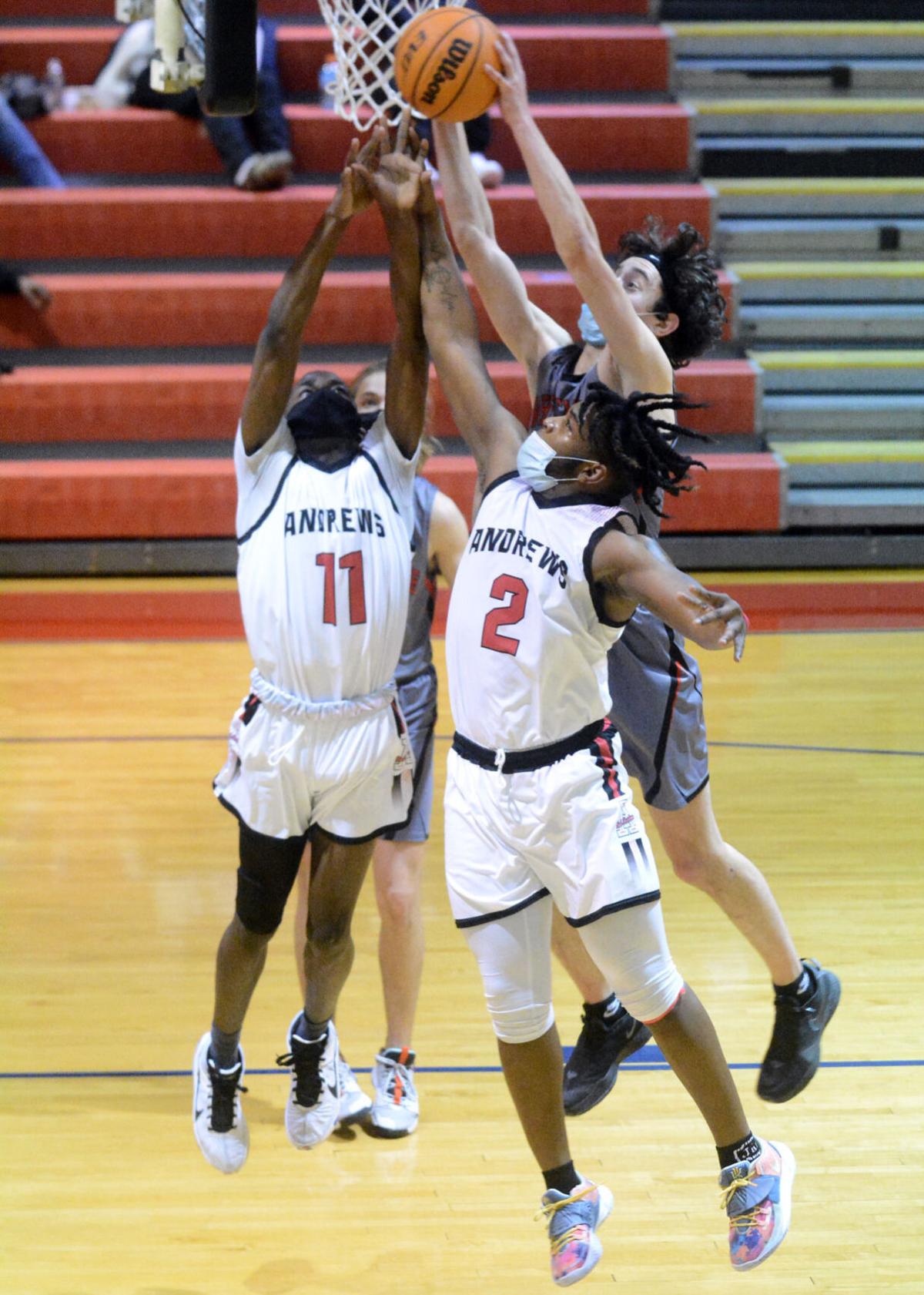 T.W. Andrews' Corbin Clinton (11) and A.J. Herndon (2) fight for a rebound with Wheatmore's Kaleb Lockwood during Wednesday's game at Andrews. 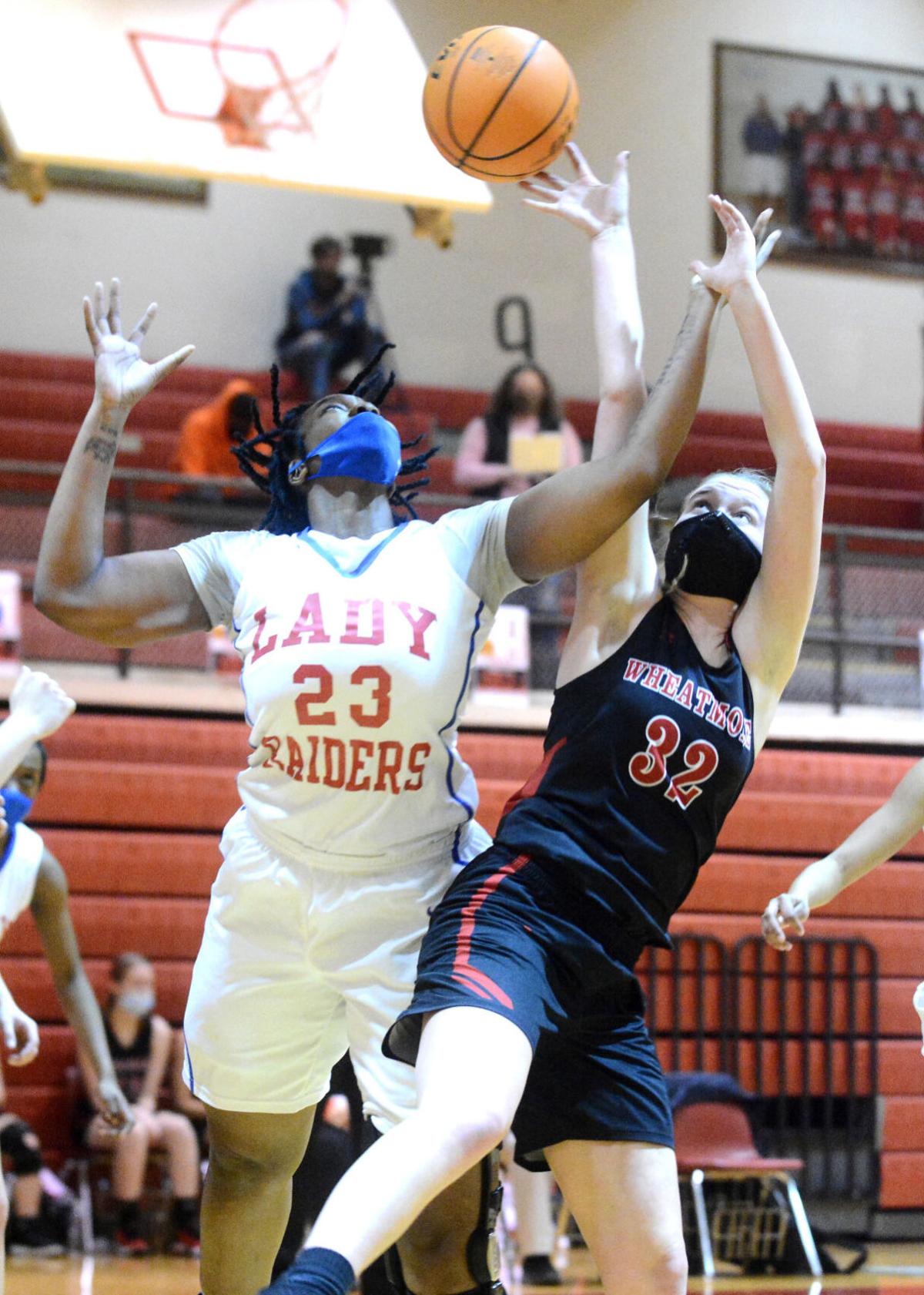 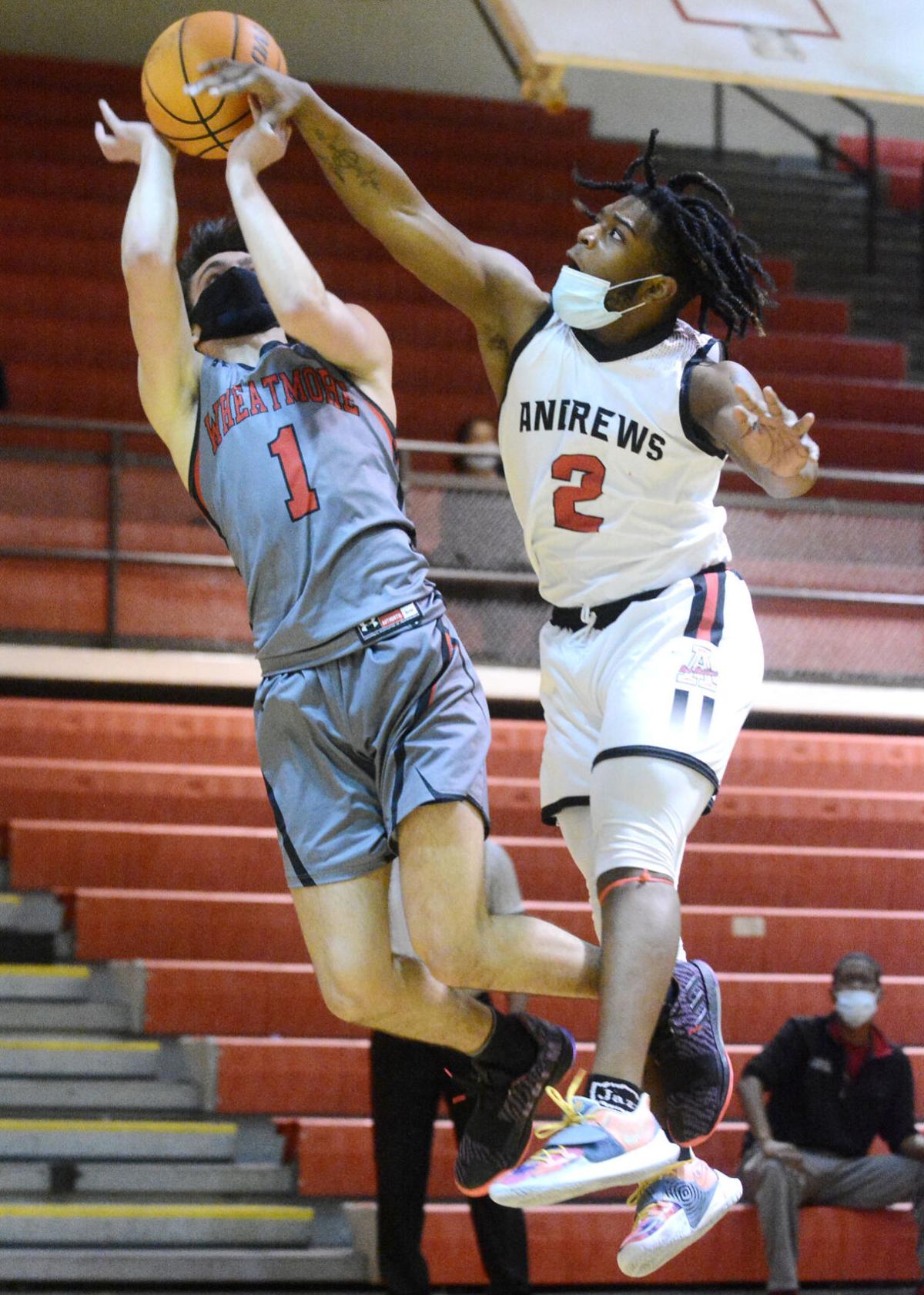 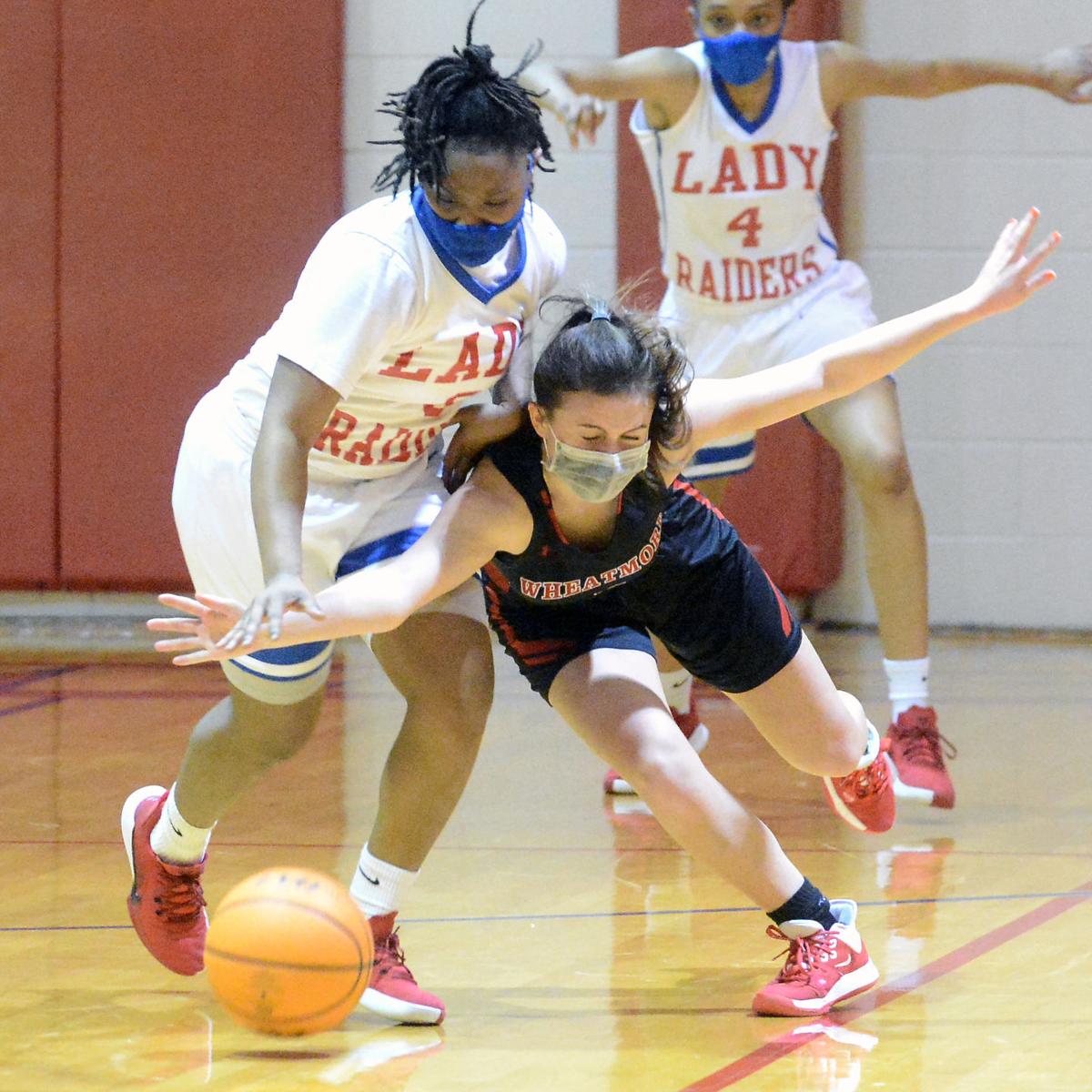 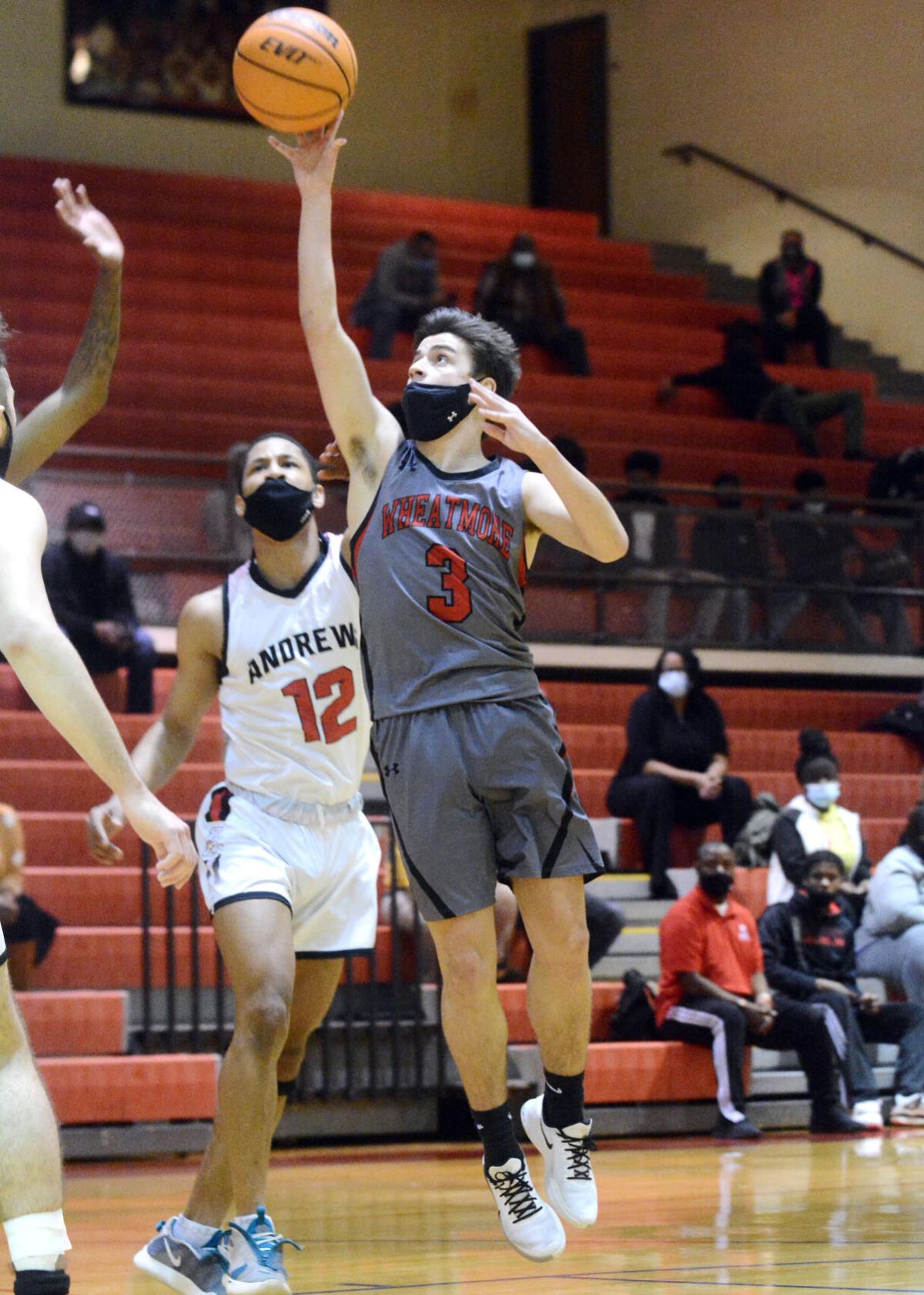 T.W. Andrews' Corbin Clinton (11) and A.J. Herndon (2) fight for a rebound with Wheatmore's Kaleb Lockwood during Wednesday's game at Andrews.

HIGH POINT – With its season potentially on the line, Wheatmore came through with a stellar performance.

The Warriors built a double-digit lead in the second quarter, held T.W. Andrews at arm’s length the rest of the way and beat the Lady Raiders for the first time ever 51-40 in PAC-7 2A girls basketball Wednesday at Andrews’ Foree Gymnasium.

In the boys game, Andrews overcame an early double-digit hole, fought back-and-forth in the second half and made a couple key plays late to beat Wheatmore 57-55 on Senior Night.

“I thought, except for maybe the first two minutes of the ballgame, that we controlled the tempo to where we wanted it to be,” Wheatmore girls coach Pete Kilcullen said. “I thought offensively we did what we set out to do – which was to slow the tempo down and we knocked the shots down, which was big for us.

“We got some secondary scoring – I think Rian Perry hit three big 3s for us out of the corner. Taylor and Kara (Comer) did an incredible job. I thought we boxed out extremely well. That was key for us. In the first game, they beat us up on the boards. I thought we did a darn good job keeping them off the boards.”

Not only was the win important for its history, but it brought the Warriors into a second-place tie with the Lady Raiders. Wheatmore won the coin toss and will receive the conference’s final automatic berth into the state playoffs.

“It’s a huge win, especially since we’re not in our home gym,” Warriors junior guard Kara Comer said. “Just the first time beating them ever and in their home, it’s just wild. I don’t even know what to say.”

Comer scored 19 points to lead Wheatmore (10-3 overall, 9-3 conference), which split both of its series against the league’s other top two teams – Randleman and Andrews. Rian Perry added 14 points, followed by Kylie Biggs with nine points.

The teams were evenly matched through the opening quarter, with the Warriors carrying a 12-11 lead into the second. But Wheatmore, clamping down on defense and steadily tacking on points on offense, scored the first 11 points of the second to lead by 12 inside the final minute.

Andrews finally scored on a layup and a foul with six seconds left to pull within 23-14 at halftime.

“I think it was the heart to win and get into the state playoffs,” Comer said. “Everybody’s putting forth their best effort, and it’s just wonderful – it’s crazy.”

Kiretha Baker scored 23 points while D’Erykah Perry – who gave the Warriors fits inside during the teams’ first meeting but was held in check Wednesday – added 13 points for the Lady Raiders (11-3, 9-3). Andrews got within in the third before Wheatmore hit back-to-back 3-pointers to push its lead back to 12.

The Warriors led by 16 midway through the fourth and held on as the Lady Raiders – who hope to get one of the very few wild-card berths in this year’s condensed state playoffs – clawed within nine inside the final minute. Andrews will have to wait for the brackets to be released this weekend.

“All the credit to Wheatmore tonight – they came in with a chip on their shoulder,” Lady Raiders coach John Shearin said. “Pete is always prepared, Wheatmore has always been prepared, and they’ve always been a great program. And it’s great to see them get their credit.

“We came out flat. The kids just didn’t show up tonight. We’ve been flat since the Randleman game. We played with a lot of heart, a lot of energy and focus on the game plan against Randleman, which was (last week). And from then on we haven’t played well.”

With the school’s 12-year run in the PAC-6 and PAC-7 conferences almost certainly concluding at the end of the school year due to realignment, Shearin looked back on what his program accomplished – six regular-season titles (all perfect runs), six conference tournament titles and a top-three finish every year.

“What we’ve been able to accomplish in this conference these last 10 years is absolutely amazing,” he said.

D.J. Jackson scored 20 points to lead Andrews (7-7, 5-7), which finished tied for fourth in the conference with Eastern Randolph and Wheatmore. Ty Little added 11 points, followed by Corbin Clinton with 10 points.

“I think we played together,” Red Raiders coach Cory Dumas said. “That was a complete game. The guys played hard. We lost by 20 over there, so to turn that around – I’m ecstatic. I’m very proud of the guys. We picked it up defensively, especially in the second half, and we stayed consistent with what we’re trying to do.”

Andrews, starting its Senior Night lineup, fell behind 14-2 midway during the first four minutes of the first quarter and trailed by 11 a minute into the second. But it answered with a 15-5 run to pull within one with two minutes left in the half and trailed 30-27 at halftime.

“We were able to make defensive stops and we crashed the boards,” Red Raiders senior swingman A.J. Herndon said. “We got more rebounds than we did the first quarter. And we attacked the basket.”

The teams remained close throughout the third quarter and into the fourth. The Warriors led as late as 51-50 with 4:26 left before Andrews made back-to-back 3s to lead by four with 3:30 remaining in the game. Wheatmore got within one twice – the final time with 1:41 left in the game.

But the Red Raiders kept it from scoring the rest of the game – forcing a turnover with 20 seconds left, getting a pivotal offensive rebound with 15 seconds left and adding one free throw, and stopping the Warriors on a runner from the left side in the final seconds.

“The difference was hustle,” Herndon said. “We had to outhustle the other team, because they played hard. Wheatmore plays hard every time we play them. So we just had to beat them with our heart – we had more heart than them.

“It’s a great feeling. It lets everybody know that you can’t count us out in any type of game. Because we came in as underdogs and we had to get the job done.”

“Their zone gave us trouble. They extended and got out on our shooters. Their zone was tough, and they’re long and athletic and we had trouble getting shots off. We were trying to get the ball behind the zone – trying to drive and kick. They did a good job keeping us out of transition and forcing us to take tough shots. Credit them for their defense. It just didn’t come together at the end.”