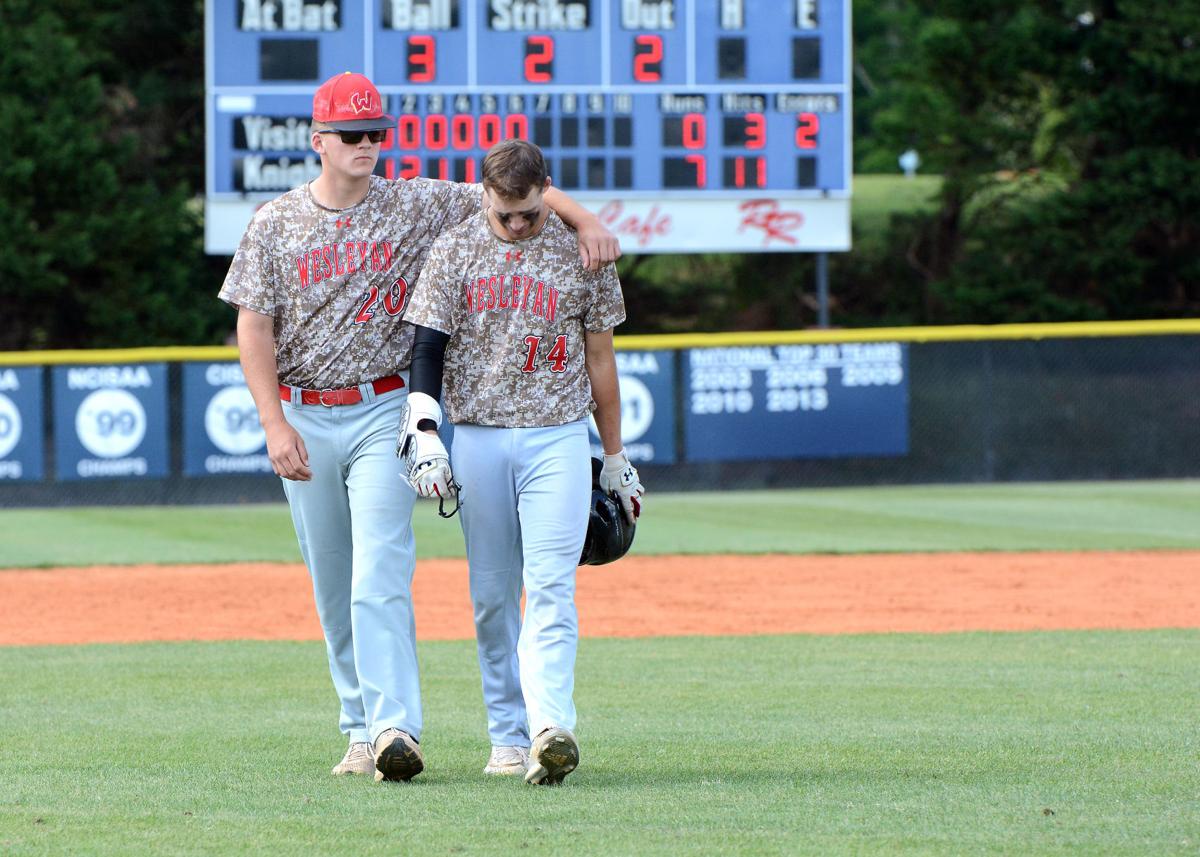 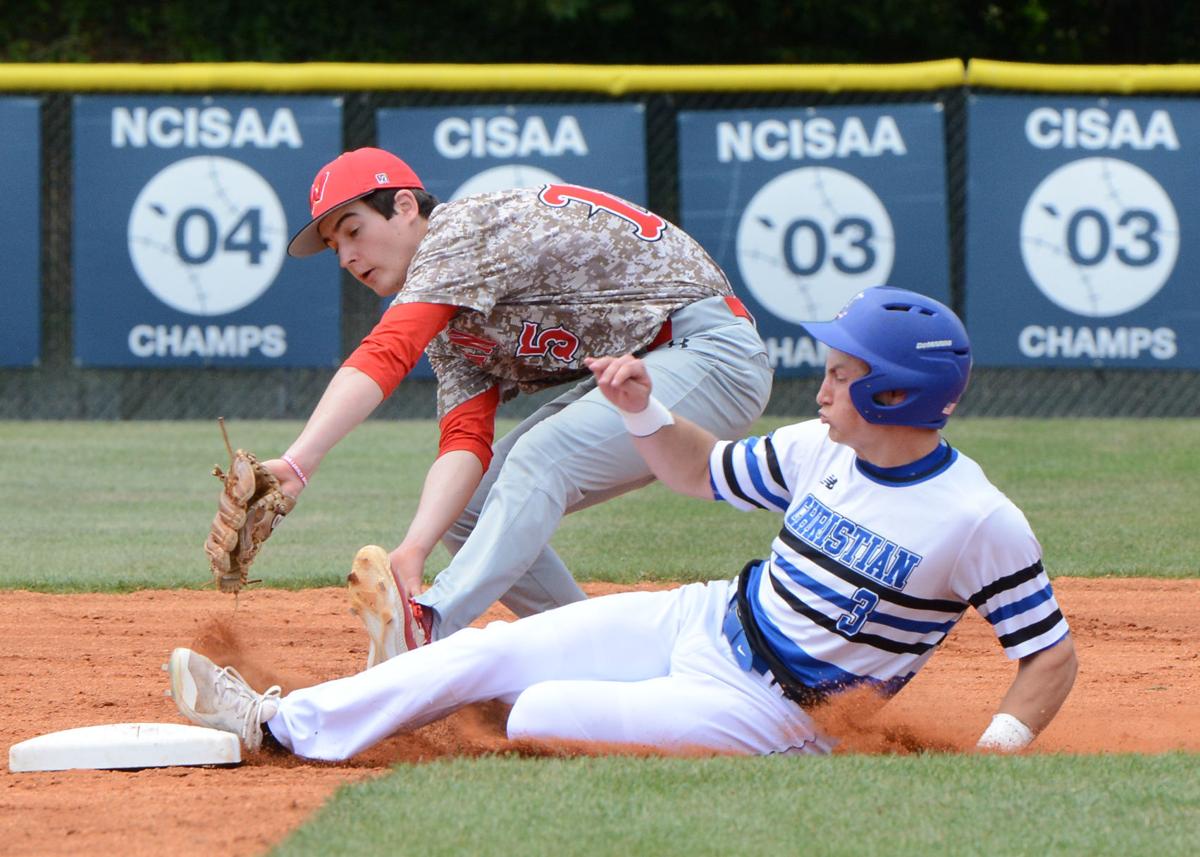 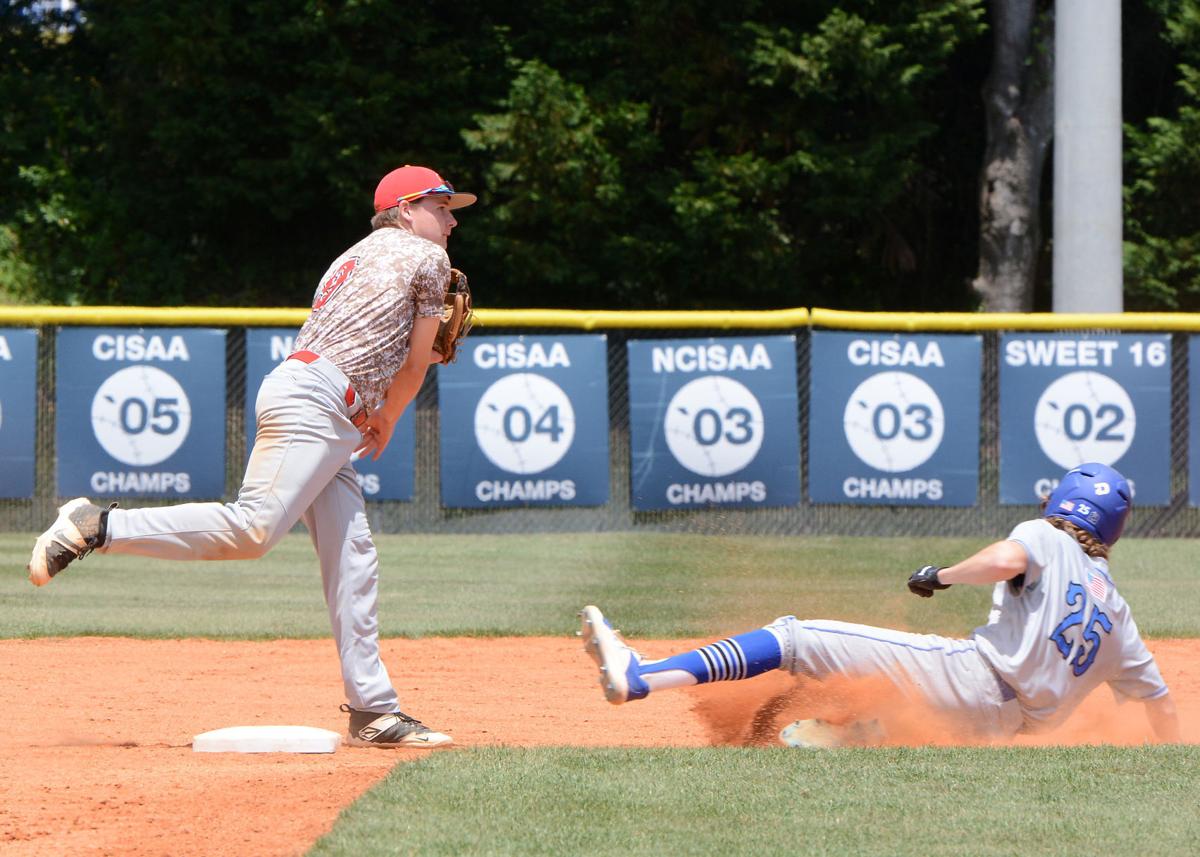 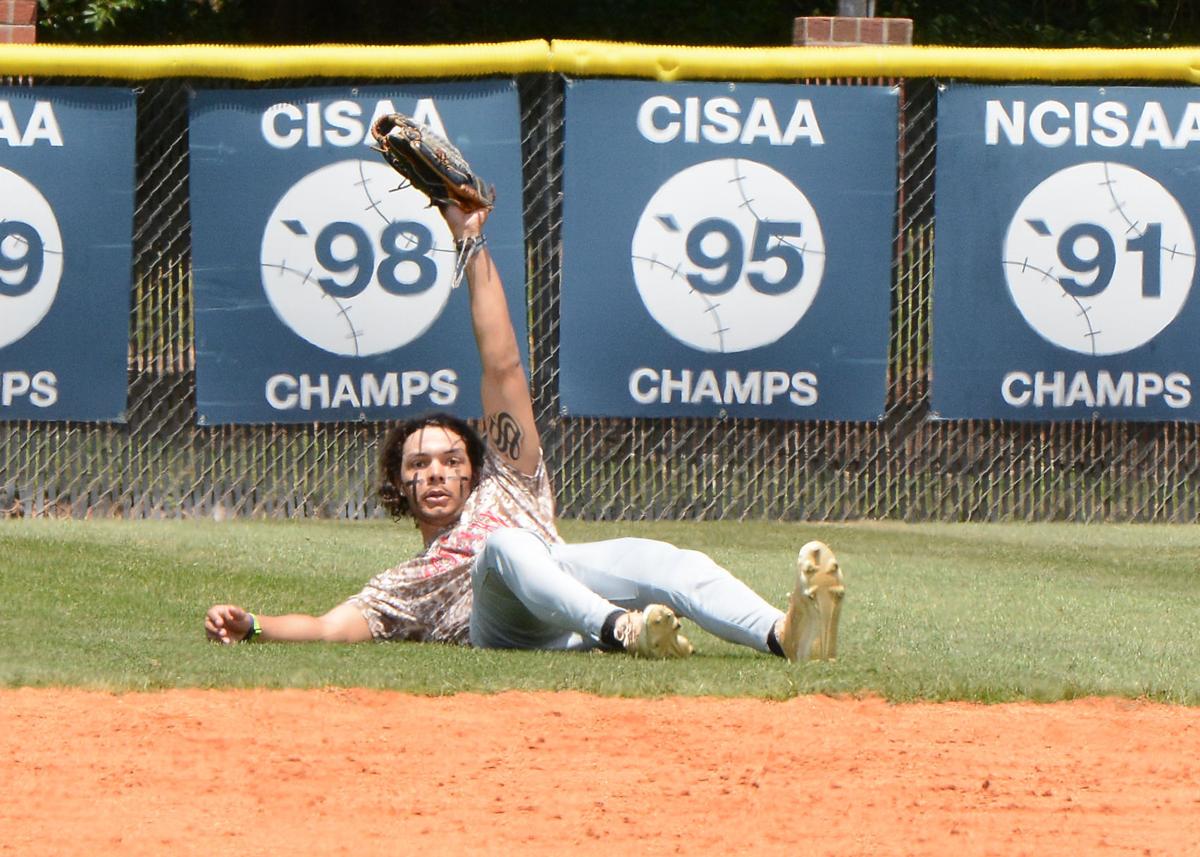 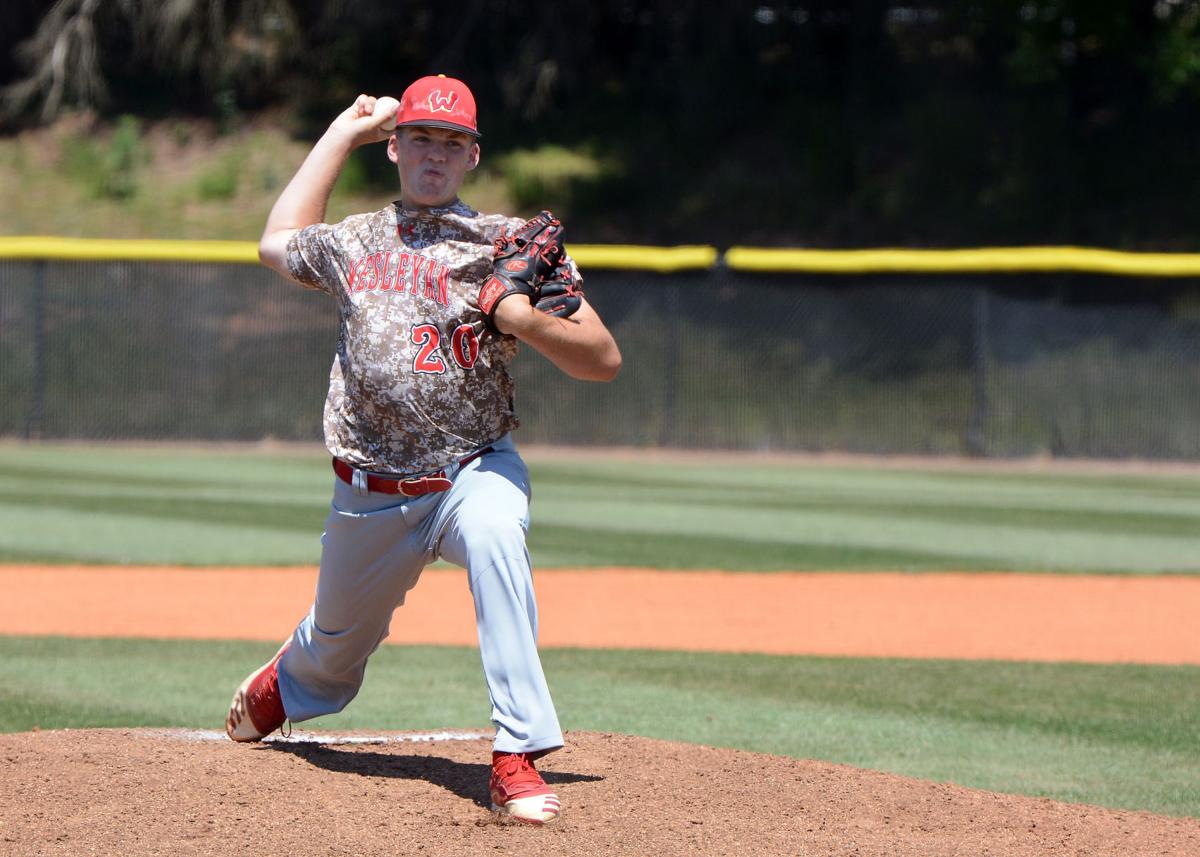 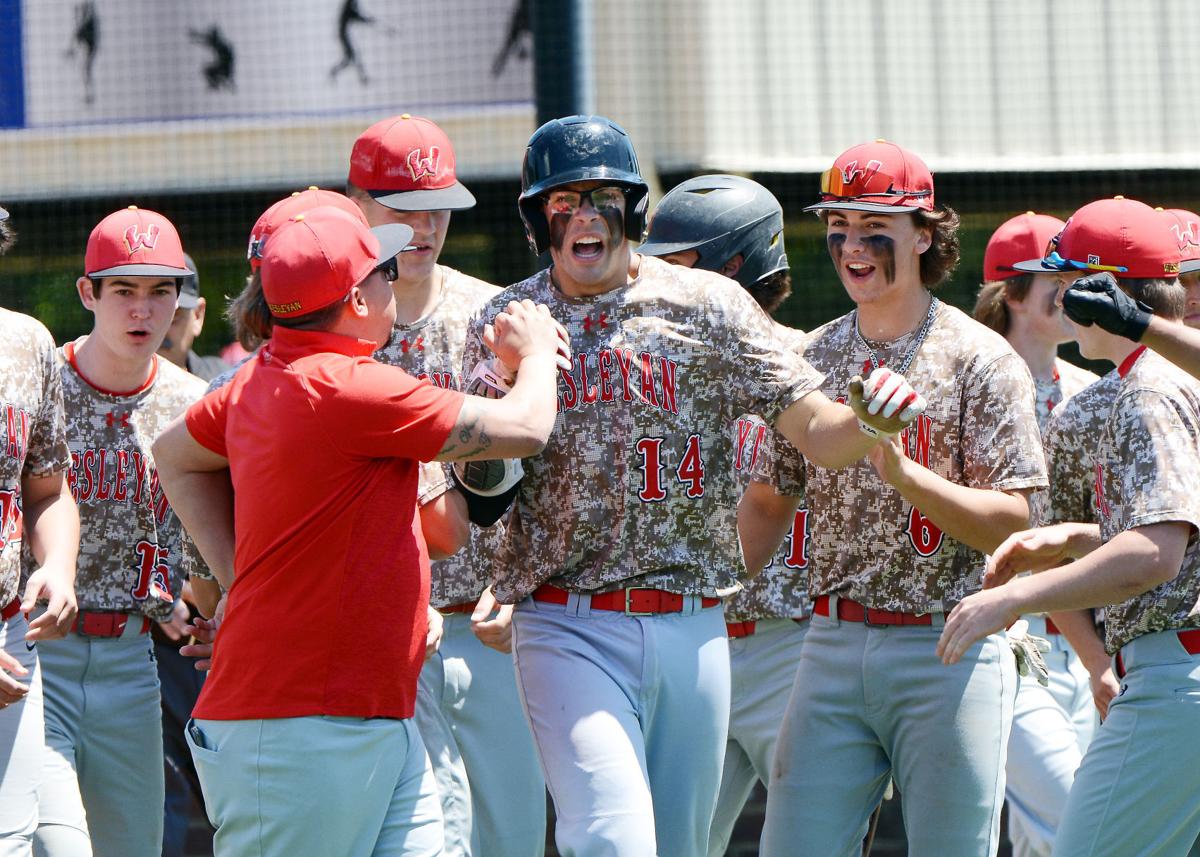 CHARLOTTE — Wesleyan Christian gave itself a shot — evening the state championship series and forcing a final game. But it couldn’t quite stop Charlotte Christian.

The Trojans, after losing the series opener Friday, took control early in game 2 — winning 5-1 behind a big first inning and stellar pitching by Sam Cozart. But they struggled in game 3 — falling 7-0 in allowing at least one run every inning — on Saturday at Charlotte Christian in the NCISAA 4A baseball state championship.

The Knights won the series 2-1 — capturing their 16th title overall and sixth in the last nine championships.

“With our guys doing what we’ve done, we competed well,” Wesleyan coach Mo Blakeney said. “We have no reason to hang our heads. We lost a tough game last night that could’ve gone either way, and to come back and play the game that we played in the first game showed a lot of character, a lot of heart.”

Jacob Cozart hit a three-run home run, Thomas Bowman scored on a squeeze bunt and Christian Walker scored on a baserunning play to highlight the Trojans’ five-run first inning to start game 2. The first five batters in the inning reached, and Wesleyan — which had all four of its hits in the inning — took control.

“We faced Calvert (Clark) last night and we felt like we played extremely well against him,” Blakeney said. “It was just a nip-and-tuck game — that game could’ve gone either way. So, for us to play that caliber game against that caliber pitcher, I was like, ‘Hey, guys, we deserve to be here.’ ”

On the mound, Sam Cozart, a talented eighth-grader, kept Charlotte Christian in check for almost the entire game — striking out 12 while allowing just one hit and two walks. The Knights’ lone run came on a sacrifice fly in the fourth — the only inning in which they put multiple runners on base.

Mason Russell pitched to the final batter of the game — forcing a long fly-out that left-fielder Drew Downs tracked down in the corner just before crashing into the wall. That gave Wesleyan (17-6) — which reached its 10th finals in the last 13 championships — a chance to rally for its sixth title.

But Charlotte Christian (21-7), which totaled 11 hits in the final game, regrouped well. It got to game 3 starter Hudson Lance just enough to put runners on and pressure the defense, which committed three infield errors over the first and second innings.

The Knights capitalized to lead 3-0 through two innings. They added single runs every inning through the sixth to extend their lead. Meanwhile, the Trojans totaled four hits for the game — including just one in 11 at-bats with runners in scoring position. So, it was difficult to overcome the early deficit.

Although Wesleyan fell just short of its ultimate goal, reaching the championship series was a learning experience. The Trojans graduate seniors Josh Jordan, Justyn Steens, Riley Phelps and Jacob Cozart but should return a significant amount of their core as they look to make another run, said Blakeney — who is assisted by Scott Clemons, Ruben Torrellas and Joel Steindel.

“Now that we have the groundwork for how we want to play and who we are as a team and as a program, now these guys understand that. And now going forward we’re excited about the future. We’ve got the foundation of who we want to be and how we want to play,” he said.