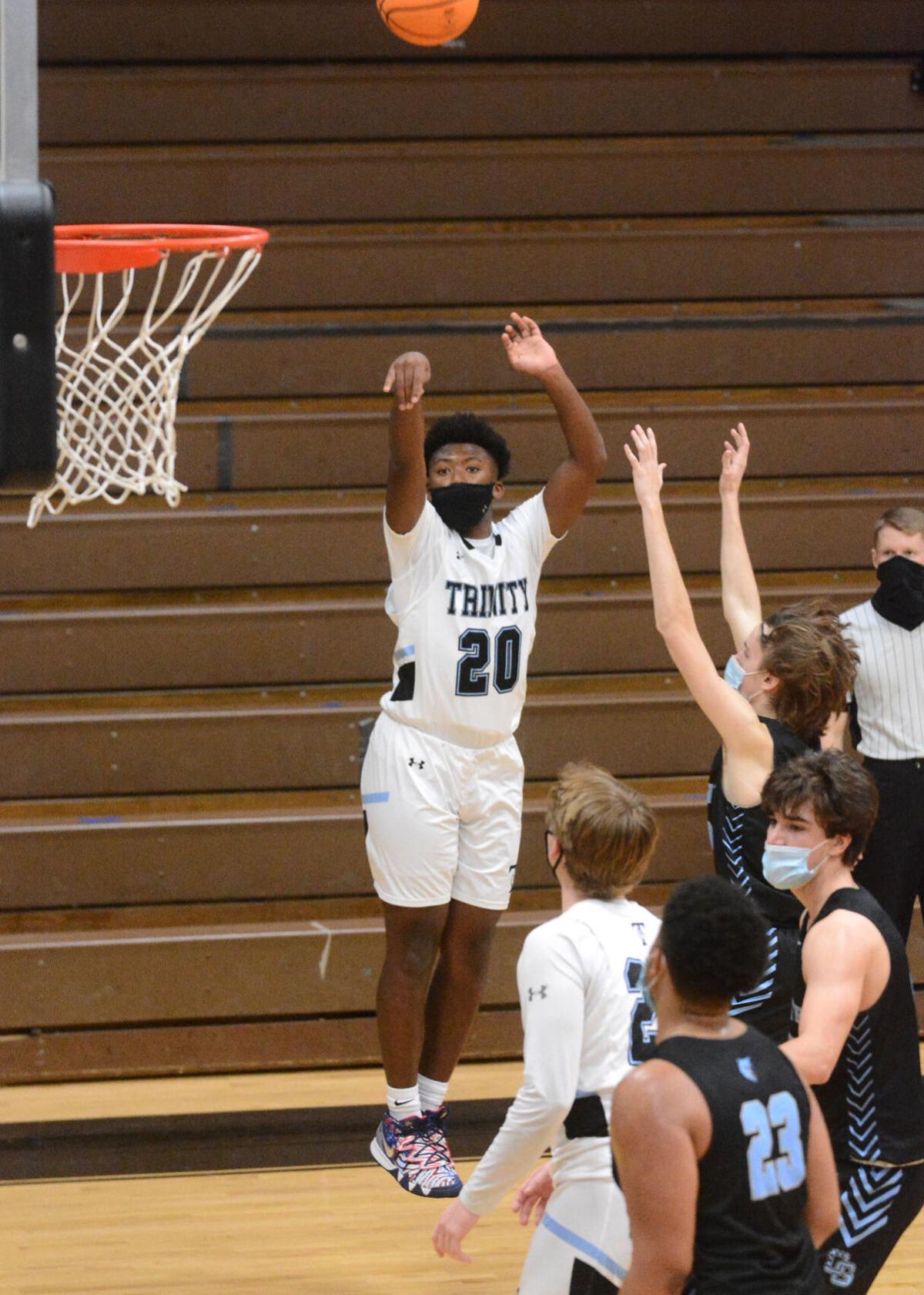 Trinity’s Dominic Payne makes a 3-pointer in the closing minutes of Wednesday’s game against Oak Grove at Trinity. 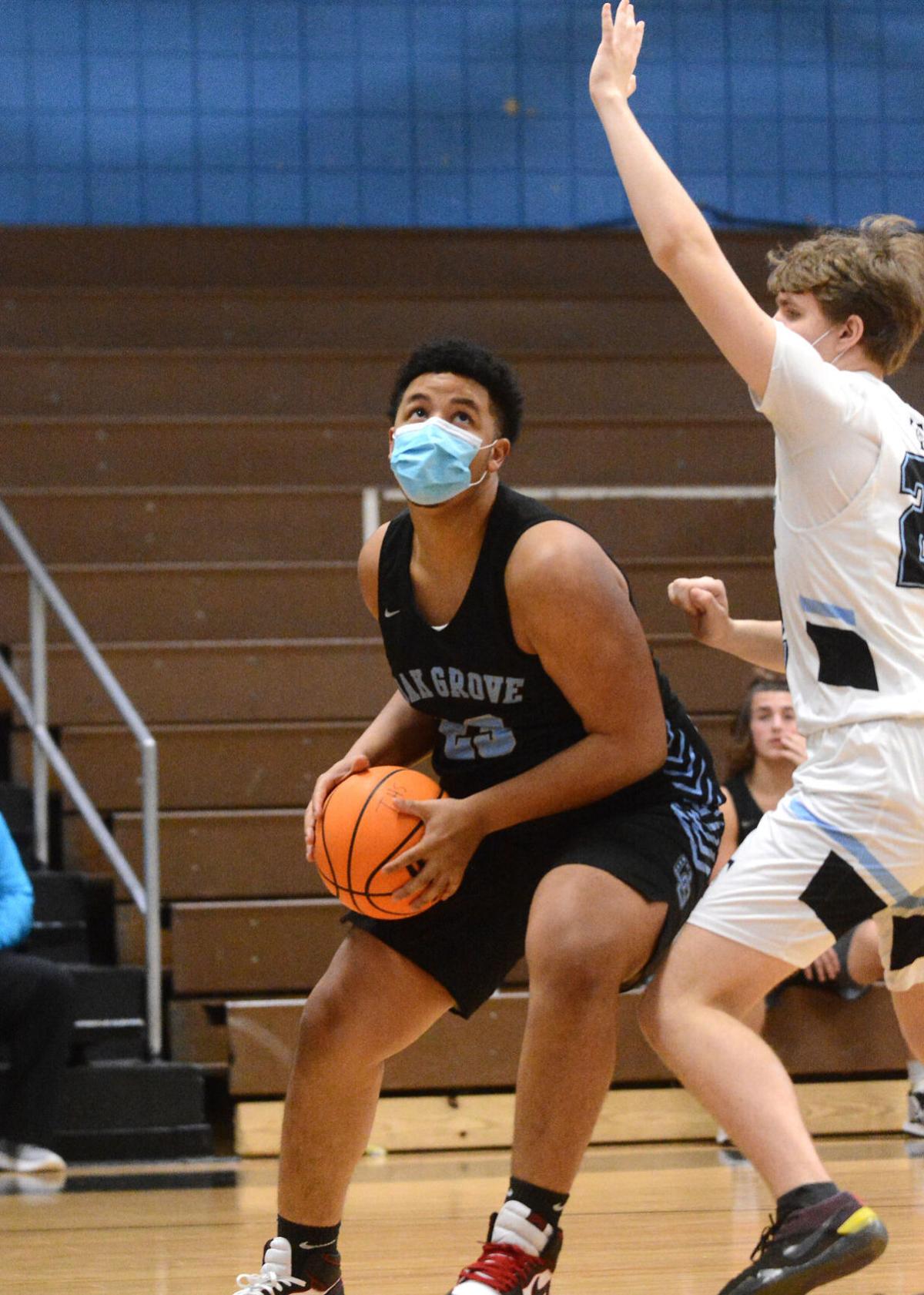 Oak Grove's Sakori Poole goes up for a shot during Wednesday's game against Trinity at Trinity. 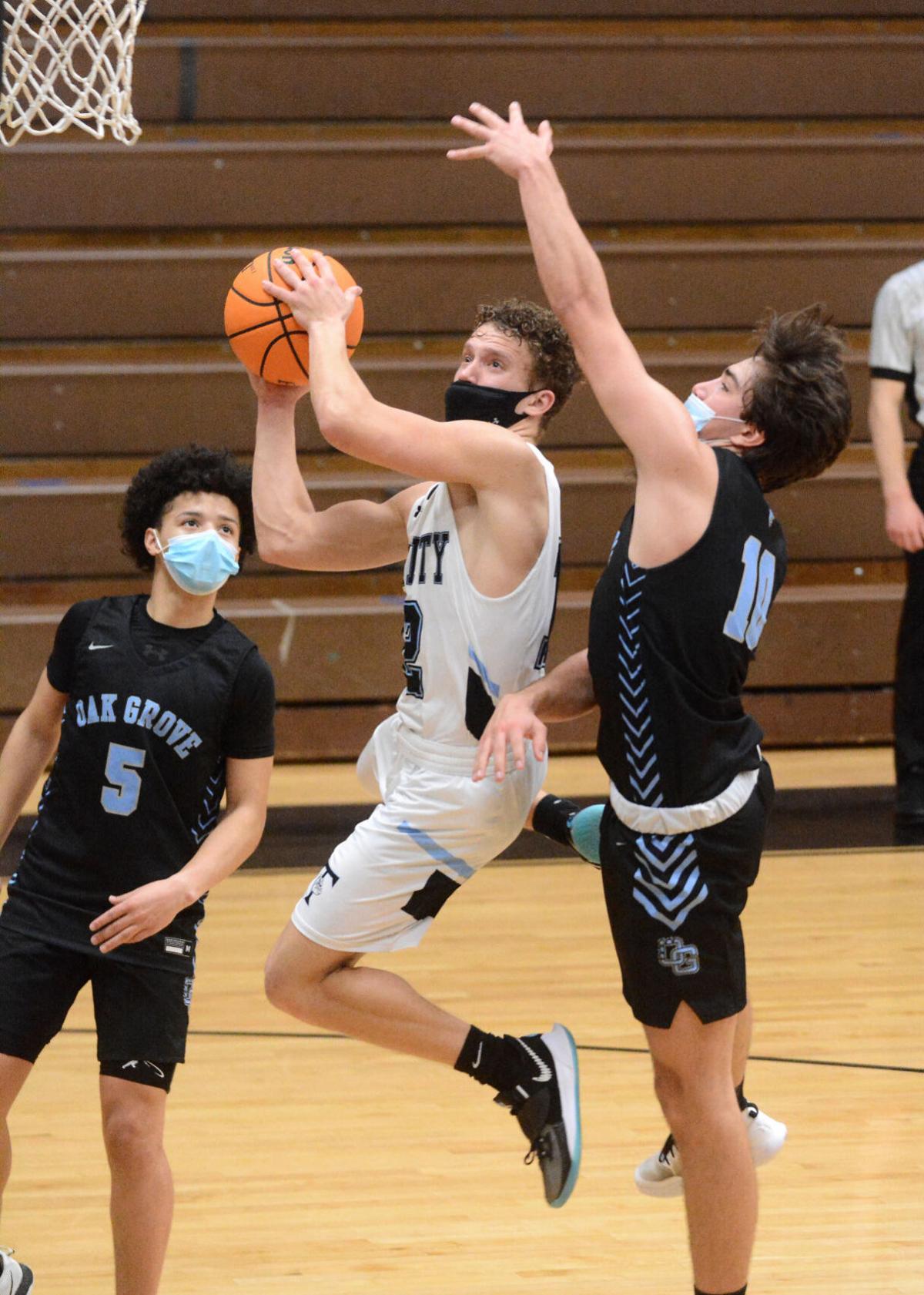 Trinity's Chris Essick, center, drives between Oak Grove's Kahleb Craven 95) and Evan Suarez (10) for a three-point play during the final minutes of Wednesday's game at Trinity. 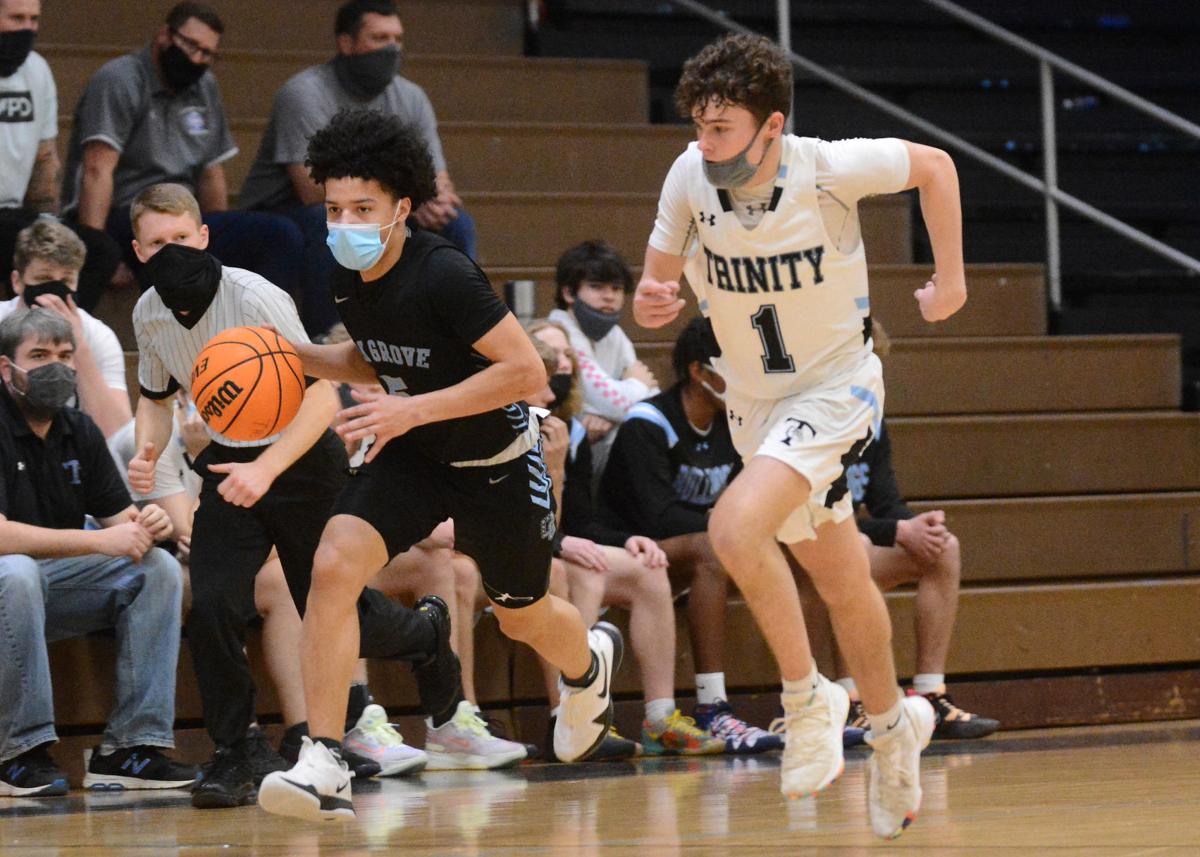 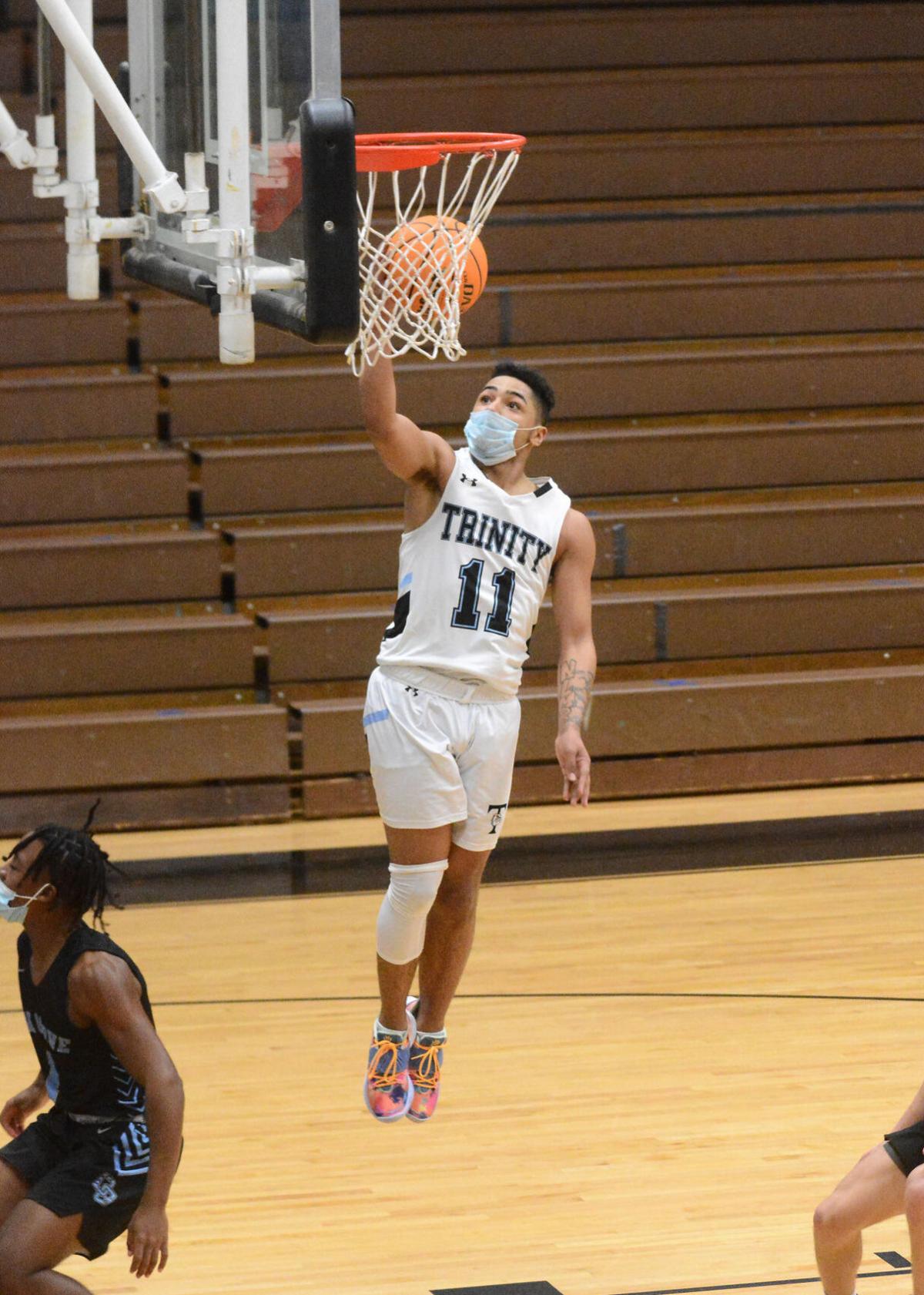 Trinity's Garrett Moser scores on a fastbreak layup during Wednesday's game against Oak Grove at Trinity. 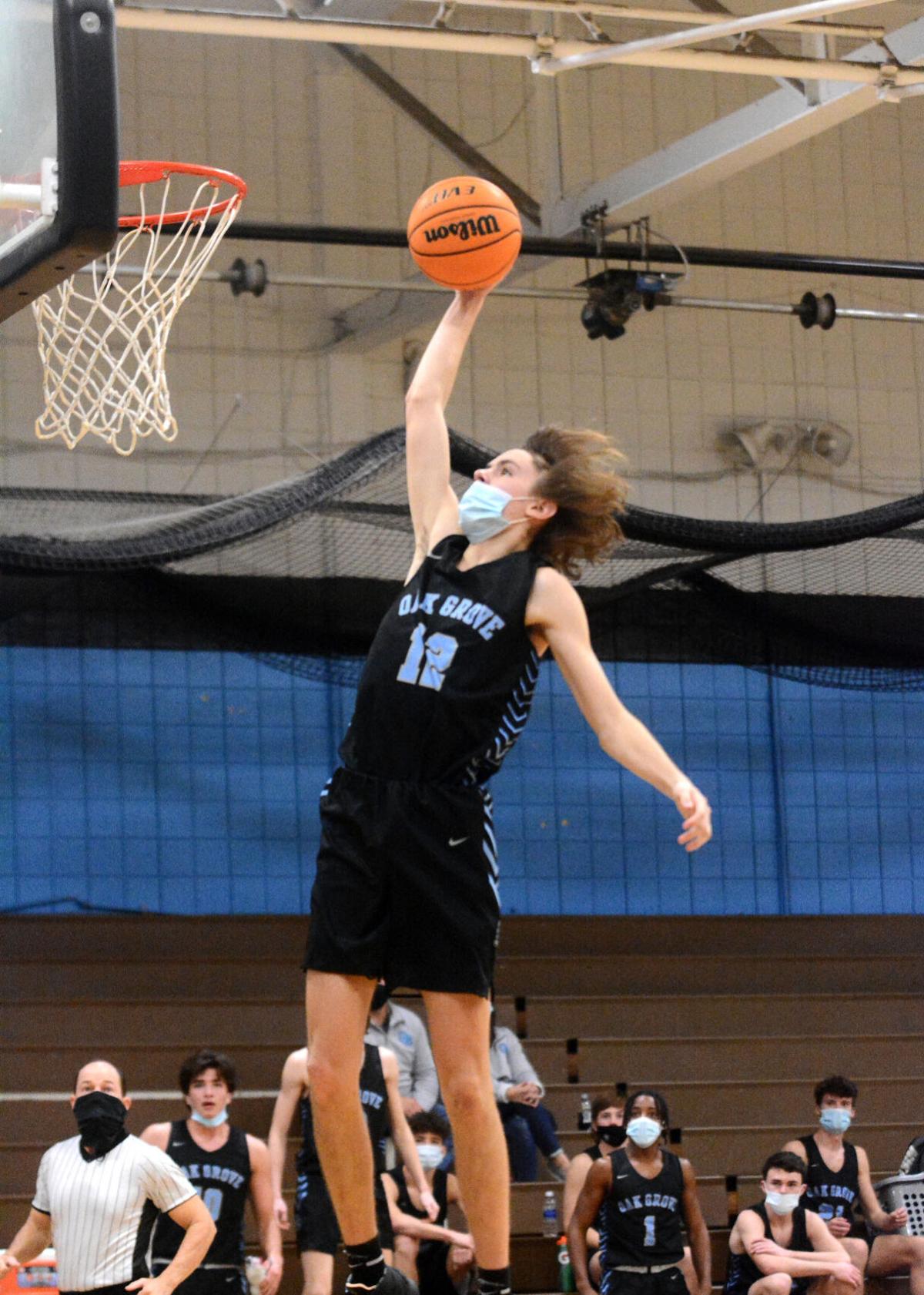 Oak Grove's Ethan Whitaker goes up for a dunk during Wednesday's game against Trinity at Trinity.

Trinity’s Dominic Payne makes a 3-pointer in the closing minutes of Wednesday’s game against Oak Grove at Trinity.

Oak Grove's Sakori Poole goes up for a shot during Wednesday's game against Trinity at Trinity.

Trinity's Chris Essick, center, drives between Oak Grove's Kahleb Craven 95) and Evan Suarez (10) for a three-point play during the final minutes of Wednesday's game at Trinity.

Trinity's Garrett Moser scores on a fastbreak layup during Wednesday's game against Oak Grove at Trinity.

Oak Grove's Ethan Whitaker goes up for a dunk during Wednesday's game against Trinity at Trinity.

TRINITY — Trinity is starting to gain a little momentum.

The Bulldogs, in a back-and-forth game of runs, pulled away over the final four minutes to beat Oak Grove 54-43 in nonconference boys basketball Wednesday evening at Trinity.

Trinity, after losing its first three games, has now won three in a row after also beating Eastern Randolph on Tuesday.

“Our attitudes have been good, for the most part,” Bulldogs coach Tim Kelly Sr. said. “And when you’re winning, it always helps attitudes. Our point guard is a transfer, so this is the first time he’s played with us. And he’s doing a great job, but our off guards have to learn to play off of him.

“And, like tonight, even though they were big, we thought we could go small and maybe beat them up and down the court. And we did — I thought that was the difference in the fourth quarter. But we’re finally getting some chemistry, and we’ll have another good contest Friday night against Southern Guilford.”

Chris Essick scored 15 points to lead Trinity (3-3), which led 18-13 at halftime and led by as many as eight points in the second half before the teams once again found themselves even down the stretch. Ben Owens added 14 points while Garrett Moser chipped in 11 points.

“I feel like we played really well,” Essick said. “We played a great team game. Something we were kind of missing the first few games of the season. We got that first win, finally clicked, and I think we’ll keep things rolling now.”

After the Grizzlies used a 13-0 run to lead by five in the final two minutes of the third, the teams stayed within one possession through the first four minutes of the fourth. With the score tied 39-39 with 4:06 left, the Bulldogs edged ahead — hitting three of four free throws to lead by three with 3:19 left.

Following an Oak Grove basket to get back within one, Trinity answered with pivotal scores by Essick with a three-point play driving to the basket with 2:00 left and by Dominic Payne on a 3-pointer from the right wing with 1:29 left to lead 48-43. The Bulldogs made 5 of 7 free throws down the stretch to seal the win.

“I believe it was more communication on offense,” Essick said of the difference late. “We had a couple things slip up in the first half. Moving the ball especially — no silly turnovers.

“I feel like everything’s coming together really well. Seniors have stepped up huge, especially in the leadership role. We’ve got freshmen playing, and they make silly turnovers. But we’re right there to help them, help them get over it.”

Sakori Poole, a 6-foot-4 forward, scored 14 points to lead the Grizzlies (2-4), who struggled with turnovers at times — particularly during the final 21/2 minutes in which they turned it over on five of their final seven possessions. Evan Suarez added 10 points while Kahleb Craven added six points.

“I thought we did some positive things, but unfortunately right now we’re just not valuing our possessions,” Oak Grove coach Todd Rausch said. “And, in a game like this where we know it’s going to be nip-and-tuck and they’ve got good shooters, every possession matters.

“And right now we’ve got to get our guys to really value every possession and stay within ourselves. All in all, that’s what it is. We did a nice job and had two really good runs and took the lead in the second half after having a down first half. We came out and picked it up, but it’s just valuing the basketball.”

If the Grizzlies handle the ball a little better, they otherwise should be in position to win games as they come down the stretch in this condensed season, Rausch said.

“Ultimately, we’re playing fairly well,” he said. “We’ve been in almost all of our games after we got a couple games under our belt. So, in the last four games, our last loss was by one and we won the two sandwiching that.

“We came into tonight with a good win last night and an opportunity to take another one. We just have to be able to finish. And that really all boils back down to taking care of the basketball.”