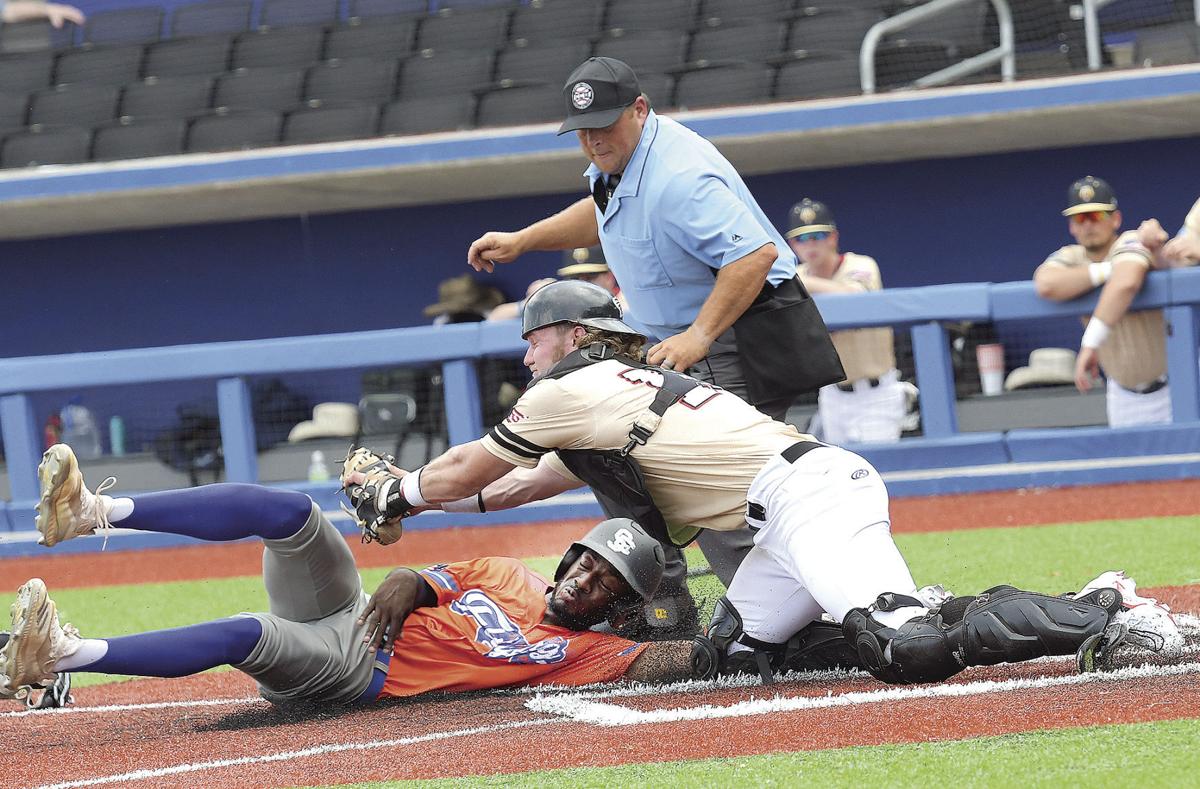 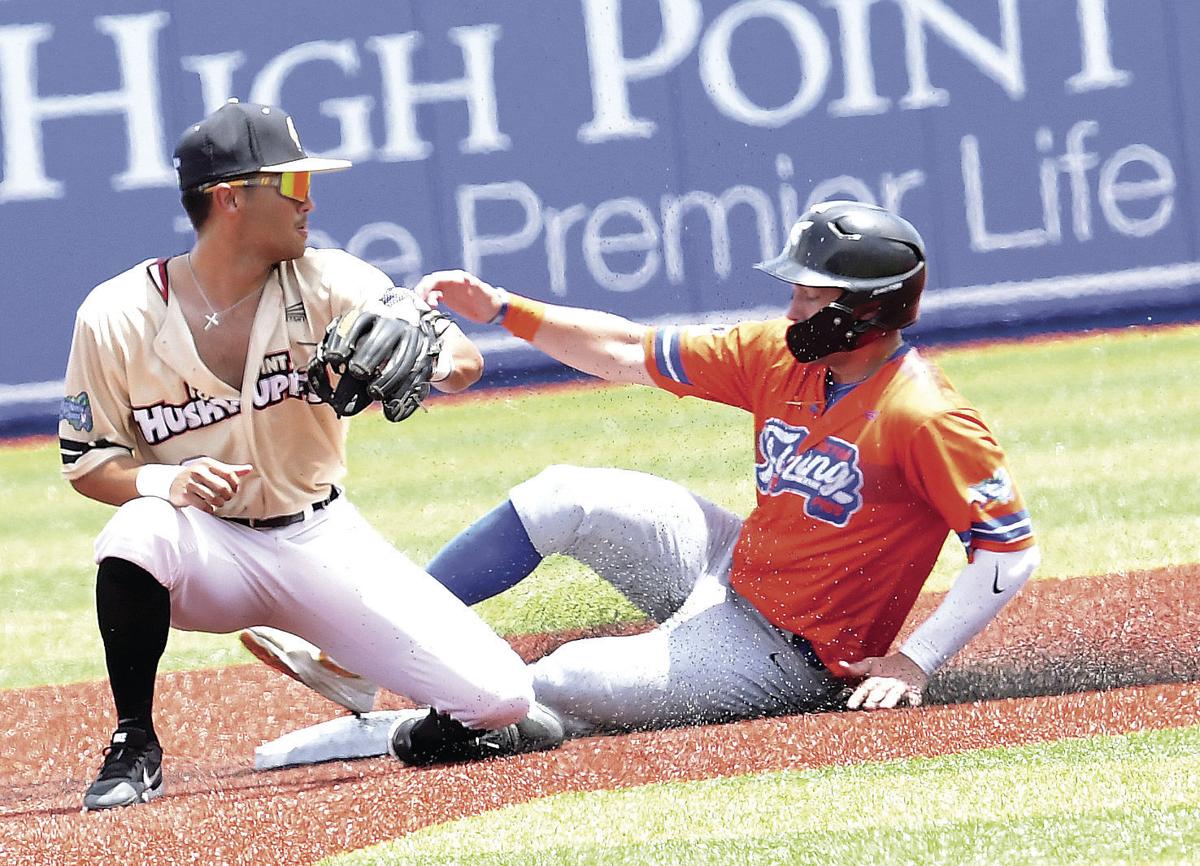 HIGH POINT — Day 2 of the Old North State League season turned out a lot better than Day 1 for the High Point Hushpuppies.

Capped by a combination no-hitter in the second game of two, the Hushpuppies swept the Lexington Flying Pigs 5-2 and 4-0 in a pair of seven-inning contests Wednesday at Truist Point stadium.

The Hushpuppies, which won the collegiate wooden bat league’s title last year as the Guilford LumberKings, fell to the Mocksville Muscadines 5-4 in their season opener on Tuesday, following a rainout on Monday. It was the season-opener for the Flying Pigs.

Both of High Point’s victories on Wednesday also featured one big inning on offense.

“The bats came alive a little bit, we’re getting the timing back to what these guys are used to,” Hushpuppies coach Brandon Nelson said. ”Some guys haven’t played in over a month so they’re getting back to hitting fastballs. We hit when we needed to and took two today and that’s always fun.”

Andrew Rust of Wake Forest University and James Denton of Kaskaskia College in southern Illinois combined on the no-hitter.

Rust, who said he saw no action for the Demon Deacons this season, tossed the first five innings, striking out seven and walking five.

“It’s been a longtime coming for me,” Rust said. “I wish I could have pitched more the past couple of years. To come out here was so relieving. It makes you fall in love with the game again.”

He pitched out of trouble through strikeouts after walking the bases loaded in the third and walking two in the fifth.

“I made a lot of adjustments on the fly today,” Rust said. “I felt good about my slider and curveball. Fastballs were spotty for me but I felt good with the breaking ball. Even with 3-0 counts 3-1 counts, I felt I could get it in there and a lot of times I did. I had several big punchouts when things could have blown up into big innings. Going forward, I have to work on not falling behind in the count so much.

Rust said he threw just a handful of fastballs.

“What worked for me is I could vary the speed of my breaking balls,” Rust said. “If I wanted something that worked like a cutter, I had it today which was nice.”

Denton overpowered the Flying Pigs in two perfect innings. Working quickly, he struck out five of the six batters he faced, including the side in the seventh.

“I just wanted to nail down the win for the boys,” Denton said. “I didn’t know about the no-hitter until I looked at the scoreboard after I worked the sixth inning. I realized we had something going on, so I decided to go out and do my thing and hoped it worked out.”

Nelson said it was the first time that he had been a part of a no-hitter in any capacity.

“I didn’t notice it until about the fourth or fifth inning, and I looked up and realized there was something going on,” Nelson said. “I was freaking out because I didn’t want to take Andrew out too early because of the way he was working. I was trying to decide to take him out. He did his thing, cleaned up the (fifth) by striking them out. I got him out. James came in and pitched a clean inning then finished it off.”

High Point mustered just four hits in the second game but took advantage of walks and a couple of hit batters.

The Hushpuppies scored their first run in the second on a hit batter with bases loaded. In the fifth, they scored one run on a walk with the bases loaded and two more on Levi Drew’s bases-loaded ground-rule double.

In the first game, Denton delivered a big hit as the Hushpuppies scored all five runs in the fifth to rally from two runs down.

With two on thanks to a single and a walk, Denton roped a double to right and cleared the bases.

The Old North State League includes 12 teams in towns stretching from Taylorsville and Lenoir in the west to as far east as Shallotte. In between, in addition to High Point, Lexington and Mocksville, are teams in Ramseur, Fayetteville, Raleigh, Reidsville and Swepsonville.

Nine of the Hushpuppies returned from last year, and Nelson said he tried to recruit new players who were an upgrade over last year. Pitching and hitting, of course, were priorities.

“Coming off championship season, I wanted to recruit a better, stronger team to defend the championship,” Nelson said. “I went after high-profile guys, guys who excel well where they are from or play at a high level. We’ve got two guys from Wake Forest. Getting guys like that, it’s just getting a little bit better caliber of player.”

The Hushpuppies go on the road Friday to play the team in Taylorsville, the appalachian Moonshiners. They return to face the Lenoir Legends in a Sunday doubleheader tat begins at 4 p.m.