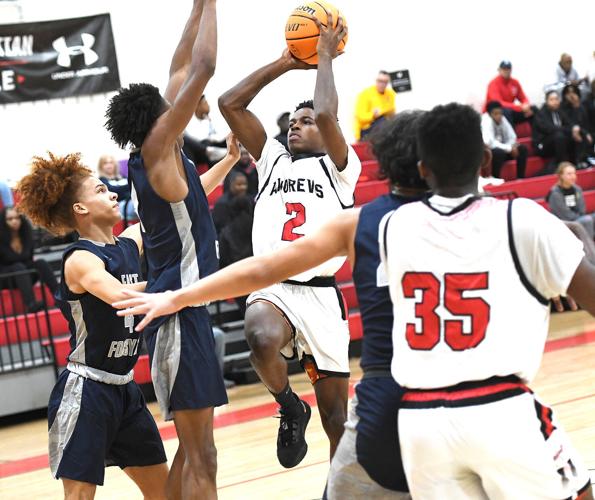 Andrews’ Corey Pate Jr. goes up for a basket against East Forsyth’s Corion Marshall during the Headliner’s Challenge at Wesleyan Christian Academy Friday. 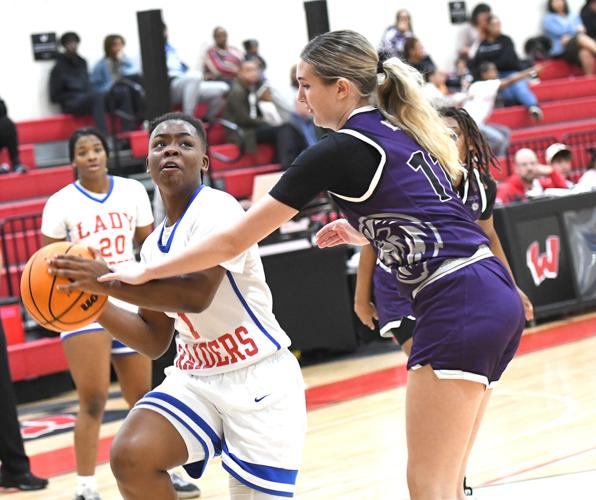 Andrews’ Corey Pate Jr. goes up for a basket against East Forsyth’s Corion Marshall during the Headliner’s Challenge at Wesleyan Christian Academy Friday.

HIGH POINT — A bit short handed, the Andrews boys couldn’t make enough plays down the stretch and fell to East Forsyth 63-55 in the Headliners Challenge at Wesleyan Christian on Friday.

The Red Raiders, who were without center Chauncy Miller because of illness, fell behind early in the second quarter but stayed close well into the fourth quarter despite having leading offensive threat D.J. Jackson on the bench during most of the second half because of foul trouble.

“I think this one of those games even though we lost, I don’t feel like it,” Andrews head coach Corey Dumas said. “I feel as a coach I save something now to use as an example. I knew what we were up against. They are constructed like us. They have about 10 seniors. They went 12-2 in their conference last year and they are a 4A school. Whenever we can play with those guys, it’s an opportunity to show who we are and I’m proud of them. Even though we didn’t get the result we did want, I’m proud of the fight we did show.”

The Red Raiders (1-1) got as close as three in the fourth quarter at 51-48 after Corey Pate Jr. made two free throws with just under three minutes left and shortly after he canned a 3.

East Forsyth then beat the Andrews defense and scored buckets on its next three possessions, Will Gray, who led the Eagles with 20 points, started the run with a layup off an inbound play along the sideline. Corin Marshall, who added 12, hit a jumper, and after an Andrews miss, the Eagles beat the Red Raiders defense with a long pass that led to Ronnie McKeever’s layup for a 57-48 cushion with just over two minutes left.

Andrews never got closer than six the rest of the way.

The absence of Miller left the Red Raiders at a decided height disadvantage and Dumas was forced to play zone defense more than normal.

“We were undersized,” Dumas said. “We were kind of playing uphill tonight. But, I tell my guys no excuses. You’ve still got to play.”

Kenshawn Gunthrop led Andrews with 20 points. Jackson added 11 but none of them came in the second half. Corey Pate Jr. had 10.

Andrews fell behind 9-4 early but scored six straight and grabbed the lead at 10-9 on Jackson’s 3 that was the first of three in a row. The Red Raiders led 13-11 after the second one and 16-13 after the third one opened the second quarter. Jalen Bennett added a jumper on a fast break, giving Andrews its biggest lead at 18-13.

Andrews’ girls had difficulty getting into an offensive flow against Winston-Salem Christian’s national team, which repeatedly forced turnovers and blocked shots.

The Lions, who are coached by former Wake Forest guard Delany Rudd, jumped out to an 8-0 lead. Andrews managed to cut the margin to 10-7 on a pair of free throws at the start of the second quarter but got no closer.

WInston-Salem Christian led 21-13 at halftime, closed the third quarter on a 7-2 run for a 36-24 margin and started the fourth with seven points in a row, pushing the lead to 43-24 with six minutes left.

“It was a great opponent,” Andrews coach John Shearin said. “Coach Rudd is as good as it gets and his program is as good as it gets. It’s about improving our kids. Shout out to that program. If we keep playing teams like that, we’ll get better and get mentioned in the same breath with those programs.”

Wesleyan closed to 41-39 on Taylor Hawley’s layup with 6:30 left but got no closer. O’Neal scored seven straight for a nine-point cushion but the Trojans cut the margin to 50-48 on a follow shot with 1:20 left and 56-53 on Hawley’s layup with 12 seconds left.

Fox put the outcome away with four free throws and Lily Pereira, who led Wesleyan with 18 points, closed the scoring with a buzzer-beating 3. Hawley added 14.