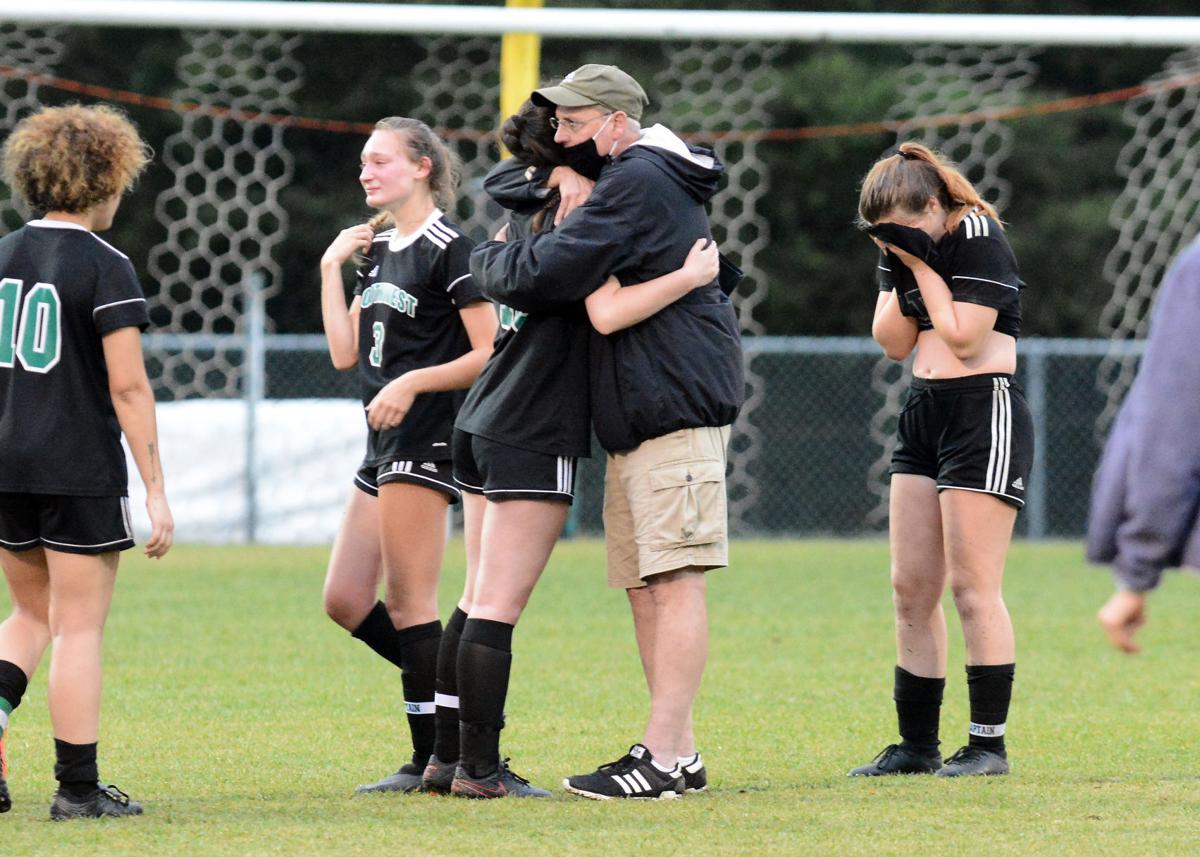 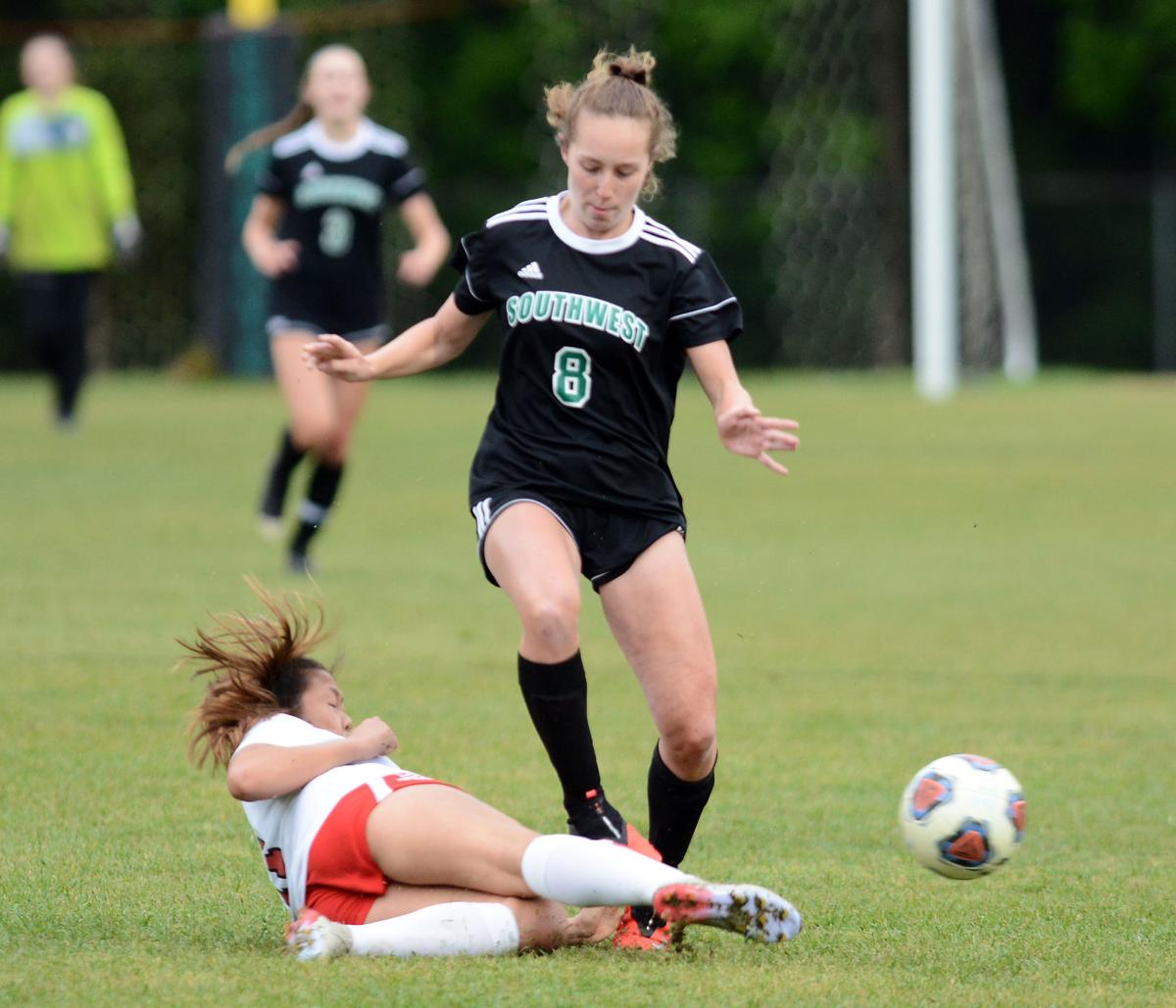 Southwest Guilford's Hailey Peterson (8) has the ball knocked away by St. Stephens' Kylie Yang during Tuesday's playoff match at Southwest. 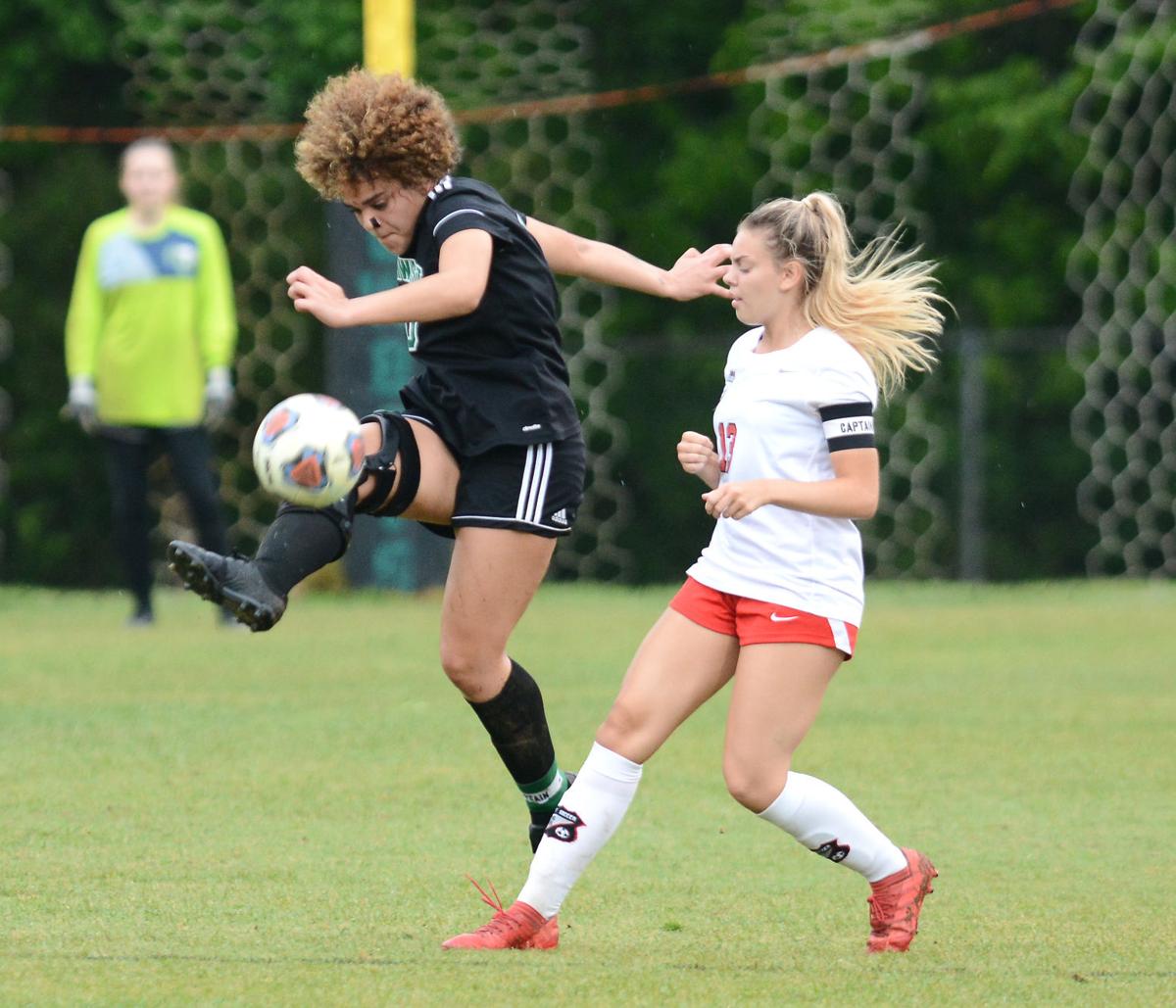 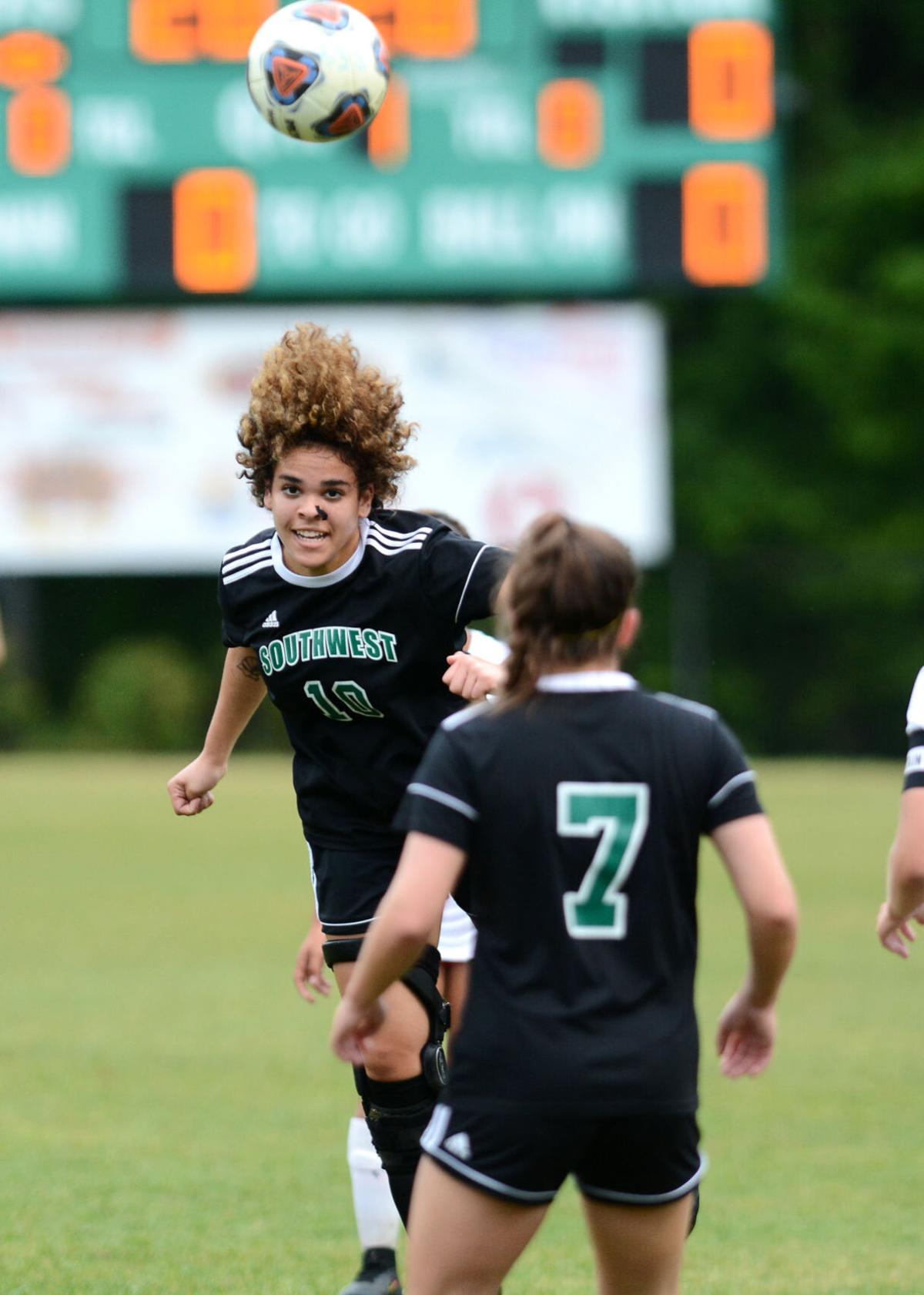 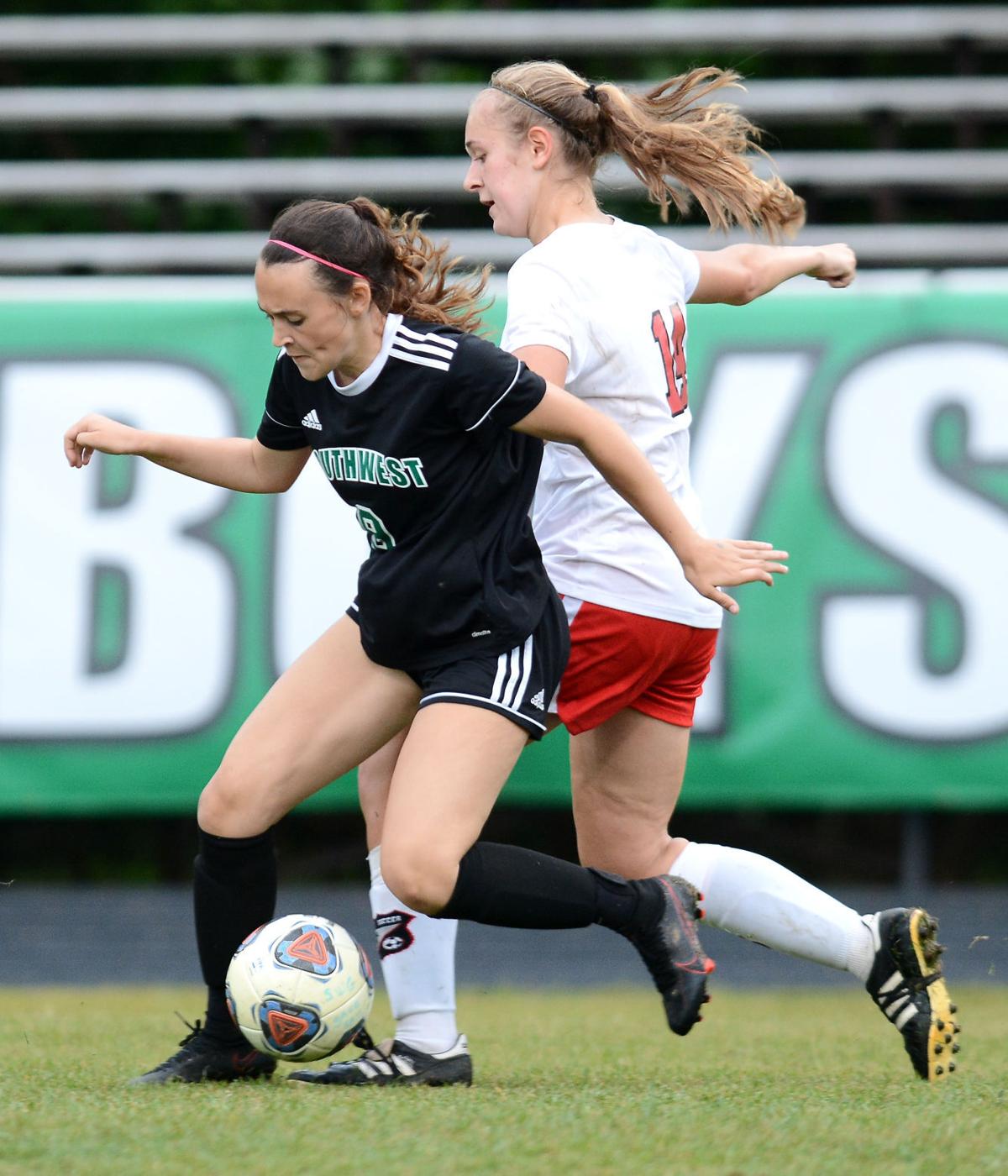 Southwest Guilford's Hailey Peterson (8) has the ball knocked away by St. Stephens' Kylie Yang during Tuesday's playoff match at Southwest.

HIGH POINT — It wasn’t quite how Southwest Guilford and coach Rob Szitas hoped the season would end. But it was a valiant effort nonetheless.

The fifth-seeded Cowgirls led early in the second half, but 12th-seeded St. Stephens squeezed in two well-placed shots — including the go-ahead goal with just under three minutes left — to beat Southwest 2-1 on Tuesday at soggy Southwest in the opening round of the NCHSAA 3A West girls soccer playoffs.

After the match, Szitas announced it was also the conclusion of his decorated coaching career.

“We played well,” he said. “It’s tough conditions out here. They played two low balls, and they kind of skipped and found the back of the net. The last one they got we just didn’t have enough time to counter it.

Kate Church scored in the 51st minute for the Cowgirls, coming off their third straight conference championship. Following a free kick by Hannah Jane Christman, the ball deflected near the top of the box, where Church lofted a shot over the goalkeeper to give Southwest a 1-0 lead.

For a moment, Southwest’s more confident and relaxed play to open the second half seemed like it would pay off, following a scoreless first half in which it fought to fend off St. Stephens’ steady pressure.

But the Indians (11-3), who were second in the Northwest 3A/4A Conference, quickly tied the match in the 53rd minute, working the ball to the middle and sending a low shot just by the goalkeeper. And the teams remained tied into the final minutes — each creating good chances late.

St. Stephens — which finished with a 19-7 advantage in shots, in large part due to a solid defense — converted with 2:52 left. It took the ball along the right side and maneuvered to the middle for a low shot just by the goalkeeper and into the lower right corner.

The Cowgirls — anchored defensively by Jamie Oleson, who had 10 saves that included several big stops in the closing minutes — sent a couple promising balls upfield in the final seconds but couldn’t put anything on net as the Indians advanced in what was essentially a later-round matchup.

“The girls played their hearts out,” Szitas said. “It’s not like we rolled over and died or anything. We got that first goal and I thought, ‘Just keep the pressure on.’ But they scored a couple minutes after that, and we were in a battle the rest of the time.

As tearful as the final result was, though, to make it into the condensed playoffs — which cut the playoff field in half and emphasized winning a conference title — during an uncertain year was ultimately an accomplishment.

“We lost 12 seniors from last year’s team,” Szitas said. “And just trying to put everybody together — it was a whole different dynamic. It took a while, but we were able to bring our chemistry together and persevere.

“So, a lot of good memories. It’s one of the strangest seasons we’ve ever had,” he said with a laugh. “But it’s definitely not one we’ll forget soon.”

Southwest Guilford vs. St. Stephens soccer Tuesday, May 4, 2021, at Southwest.