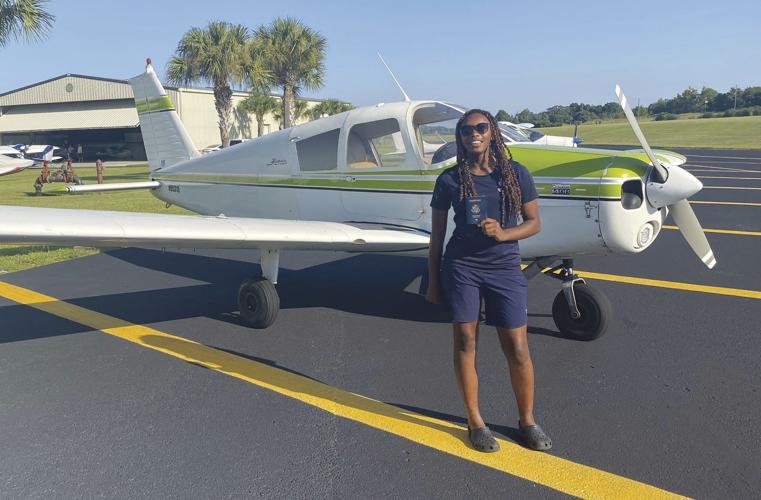 Over the past year, Aleiah Martin’s flight training has taken her to several airports in North Carolina, Georgia and Florida, including this one, Orlando-Apopka Airport in Florida. She is holding up her passport, which she had to present as identification to receive an endorsement for flight credit. 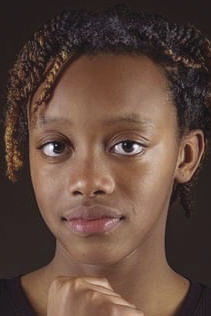 Aleiah Martin discovered her love of flying last spring, when she and her parents, Amber Covington and Aaron Kepley, were living in Salisbury. After visiting the Charlotte Airport Overlook — a park where people can watch planes taking off and landing at the airport — in spring 2021, Aleiah asked for a flight lesson, Covington said.

“She came to me one day and said she wanted to see what it was like to fly in a plane,” she said.

After that introductory lesson at the Stanly County Airport, Aleiah was hooked. She set her sights on becoming a pilot.

She joined the First in Flight chapter of Women in Aviation, applied for a flight training scholarship and was awarded one for $1,500.

That base of knowledge came in handy in February after Covington, a librarian, got a new job in Greensboro. She immediately contacted Andrews Aviation Academy in High Point to see whether Aleiah could be admitted. She could, and will start 10th grade there in August.

That determined where the family would live: High Point.

Covington said after all the school disruptions of COVID-19, she and Kepley didn’t want Aleiah to have to ride a bus to get to school if infections spiked again. They now live close enough to Andrews that she won’t have to.

Aleiah said she is looking forward to the new school year.

“I feel moving to High Point will give me more aviation opportunities,” she said.

Later this month she will attend an aviation camp at Elizabeth City State University. In July she will use the Women in Aviation scholarship to begin flight training with Elon Aviation in Greensboro. She previously has logged nine hours of training time.

For after the scholarship money runs out, Aleiah is selling aviation-themed T-shirts — see https://www.bonfire.com/store/abm-adventures/, or on Instagram see @abmapparel — to help pay for continuing flight training. Any money raised beyond that will help with college.

She hopes to get her pilot’s license before she graduates high school.

After high school she plans to attend Elizabeth City State’s aviation program, and then ….

“She is 14 and has changed her career interests in aviation several times,” she said.

“And now she has returned to becoming a commercial pilot due to the recent increase in salaries,” Covington said.

In an interview, Aleiah said the Air Force is still under consideration.

One thing Aleiah anticipates she will have to get used to at Andrews is a radically different composition to the student body than she has experienced before: When she visited the school earlier this spring, she didn’t see any other girls.

Still, learning about flying is the important thing.

“I am very excited to attend Andrews and learn more about aviation,” she said. ““I am very grateful for the opportunity.”