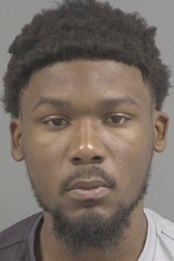 HIGH POINT — A minor wreck at a south High Point intersection Monday evening turned into a confrontation resulting in gunshots being fired into one car, severely injuring a pregnant woman, police said.

The woman, whose name was not released, was in stable condition Wednesday at Moses Cone Hospital in Greensboro, the High Point Police Department reported.

Three cars were waiting to turn left from westbound Market Center Drive onto northbound S. Main Street about 7:45 p.m. Monday when the third car in line pulled forward and struck the middle car, pushing it forward into the first car, according to a High Point Police Department accident report. The second and third cars then pulled away, the accident report said.

Police soon received calls reporting that a confrontation between people in two cars after a traffic accident had resulted in gunshots, a police press release said. Officers arrived in the 1600 block of S. Main Street, a short distance from Market Center Drive, to find both in a parking lot, and one had been struck by at least eight gunshots.

Neither vehicle had any significant damage from the bumping on Market Center Drive, police said.

Officers found the 36-year-old woman, who is five months pregnant, at a nearby business and applied tourniquets to control the bleeding from multiple gunshot wounds, police said. Further information about her injuries was not released.

Deontre A. Horne, 19, of High Point, and Jeremiah M. Williamson, 19, of Thomasville, both were found to be armed and were questioned.

Williamson is listed on the accident report as the owner of the middle car out of the three involved on Market Center Drive.

After an investigation, police have accused them of firing shots at the car the woman was in, and they were arrested Wednesday and charged with attempted murder. They were being held at the High Point Jail, and their bond was set at $750,000 secured.