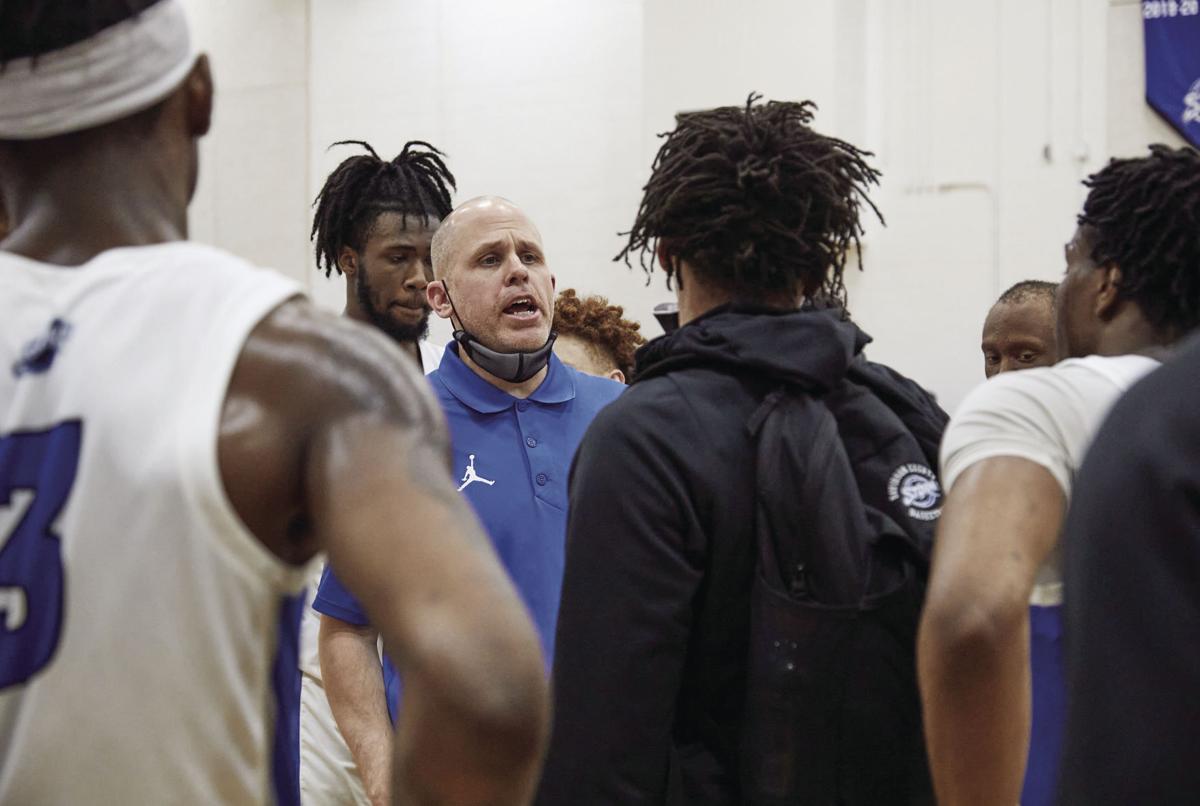 Matt Ridge, shown here talking to his team during a timeout, built the DDCC Storm basketball program from scratch after being hired in 2007. 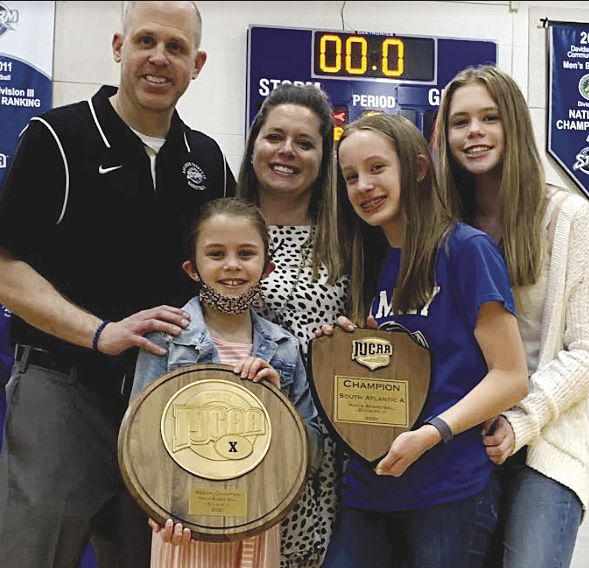 Storm head coach Matt Ridge celebrates this year’s district championship with his wife and daughters, who he says have made huge sacrifices to allow him to continue coaching. Shown with Ridge are Ella, 9, from left, wife Candice, Parker, 11, and Mattison, 15.

Matt Ridge, shown here talking to his team during a timeout, built the DDCC Storm basketball program from scratch after being hired in 2007.

Storm head coach Matt Ridge celebrates this year’s district championship with his wife and daughters, who he says have made huge sacrifices to allow him to continue coaching. Shown with Ridge are Ella, 9, from left, wife Candice, Parker, 11, and Mattison, 15.

THOMASVILLE — Thirty years ago, when Matt Ridge first dreamed of becoming a college basketball coach, this is not what he had in mind.

Just as no teenage hoopster fantasizes about draining 3-pointers at a junior college, no teenage wannabe coach envisions himself drawing up plays on a clipboard at a junior college — much less a juco in tiny Thomasville, North Carolina, a city better known for a Big Chair than for big-time basketball.

But here’s what you have to understand about Ridge, who just completed his 14th season as the men’s head basketball coach at what is now Davidson-Davie Community College:

He loves it. Ridge may or may not ever coach at a four-year college — although he admits it’s still one of his career goals — but he’s going to make the best of wherever he happens to be, and right now that’s coaching the DDCC Storm.

Make no mistake — DDCC is, indeed, a big-time college basketball program, albeit a junior college program. Just ask any of those other juco teams — often nationally ranked teams — that have been blown off the court by the Storm.

Since its inaugural 2007-08 season, when Ridge launched the Storm as a brand-new program, the team has won more than 82% of its games, compiling a 363-77 record. The team has racked up 12 regular season championships, five regional tournament titles and six district tourney titles — meaning they qualified six times for the NJCAA’s 16-team national tournament — and two trips to the Final Four. The Storm has also led the nation in scoring five times.

This year, the Storm finished 23-3 after advancing all the way to last weekend’s national championship game, an 86-75 loss. Last year, the team finished 31-1, but didn’t get to play in the national tournament because it was canceled by COVID.

Not too shabby for a school whose gym size rivals that of some middle schools, seating only about 320 people.

“We’ve had a lot of games where the fire marshal has said, ‘No more people,’ ” Ridge says of the school’s Brinkley Gymnasium. “Sometimes we have to have an overflow room with a big screen for the people who can’t fit into the gym. Lately, there’s been talk of us building a new arena.”

That’s what happens when you have a national powerhouse basketball team, of course, but it wasn’t always that way at DDCC.

“The first time I walked into that gym, it was not set up to host a game,” Ridge remembers. “We had no side goals. We had no scoreboards. We had no bleachers. The walls were different colors. They had to pump in a boatload of money just to get Brinkley Gym to the point where we could host a game.”

Ridge, now 47 and living in Thomasville, first got interested in coaching in the early 1990s, when he played at Ledford High School and was inspired by his coach, Robert Kent, a man he still considers his mentor.

“The impact he had on us — not just on the court but in our lives — he was like a second father to all of us,” Ridge says. “Nine of the 12 guys on that (1992) team went on to coach, and I think that speaks volumes about the influence he had on us, not just as basketball players but as husbands and fathers and men. He set an unbelievable standard of excellence as a coach.”

After high school, Ridge played two seasons of junior varsity ball at the University of North Carolina, then spent two seasons as the team’s student assistant coach while earning his degree in mathematics education. He has taught high-school math for more than 25 years, currently teaching at Southwest Guilford.

Meanwhile, he coached 10 years of high-school basketball and was an assistant at Guilford College when he became the inaugural coach at what was then Davidson County Community College.

Because no state money can be spent on athletics at community colleges in North Carolina, Ridge receives a stipend paid through the Davidson-Davie Community College Foundation, and while it’s better than what high-school coaches make, it’s nowhere near what he would make at a four-year school.

“I don’t do it for the money — I do it because I love coaching and I love these young men,” he says. “If you’re in college coaching and you’re not at the Division 1 level, and you’re doing it for money, you’re crazy, because the amount of time you’re putting into this and what you’re getting paid is pennies on the hour. It’s something you’ve got to absolutely love, and I do.”

Players who come to DDCC quickly learn Ridge’s three non-negotiables — hard work on the court and in the classroom, doing what the coaches ask, and having a good attitude no matter what happens. If they do those three things, he says, they’ll be successful — on the court and in life.

Ridge says he lives for those days when a former player walks into his office 10 years down the road, gives him a hug and says, “Coach, I really appreciate what you taught me.”

Still, Ridge says he’d be lying if he didn’t acknowledge he still harbors that dream of coaching at a four-year school. Over the past 14 years, he says, he’s been a finalist for four or five such jobs, but none of them panned out.

Frankly, that’s OK with Kenneth Kirk, who oversees the college’s athletic program. Kirk served on the committee that hired Ridge in 2007 and is one of his biggest fans.

“From day one, Matt brought in a professional program,” Kirk says. “We didn’t think the program would take off as quick as it did, but it took off like a rocket, and it’s still going. He was a great choice for our program.”

“I guess I’ll just cross that bridge when I come to it,” Kirk says, “but that’s a bridge I’m not looking forward to crossing.”