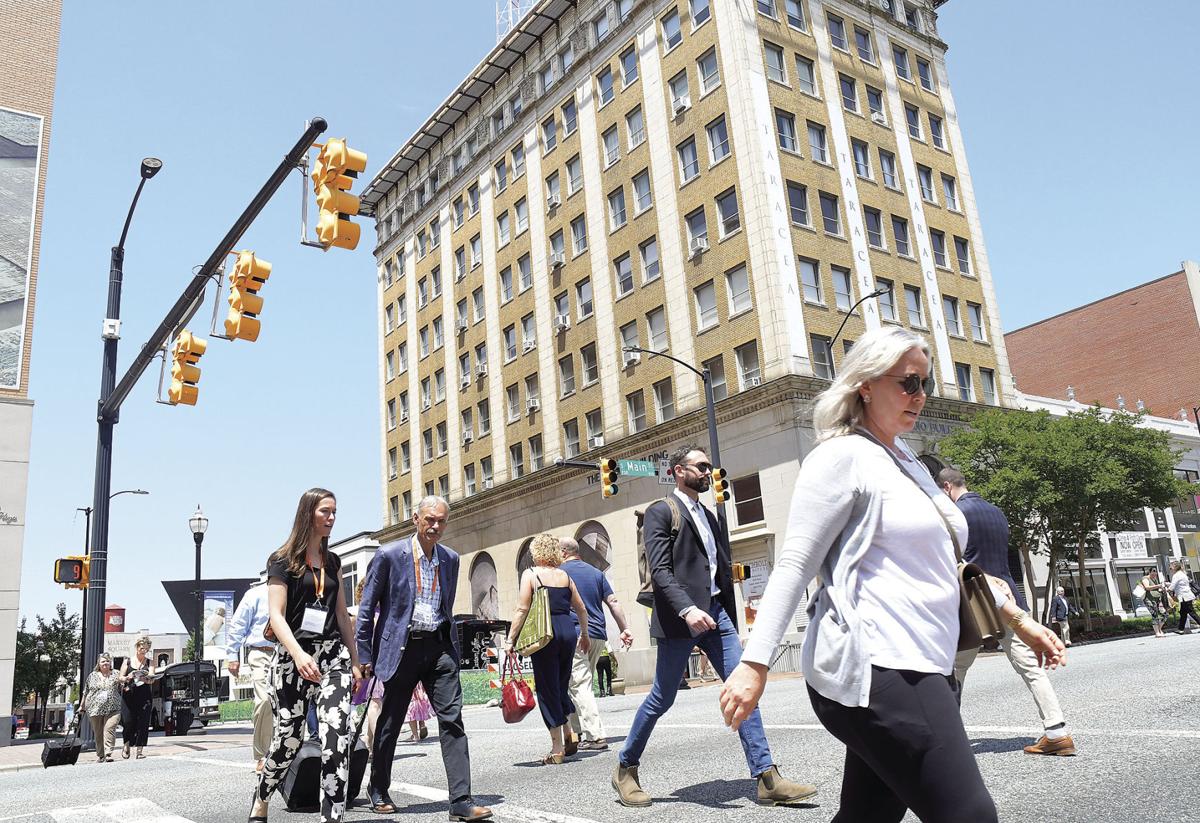 Marketgoers make their way across Main Street at the intersection of Commerce Avenue during opening day of the High Point Market on Saturday. 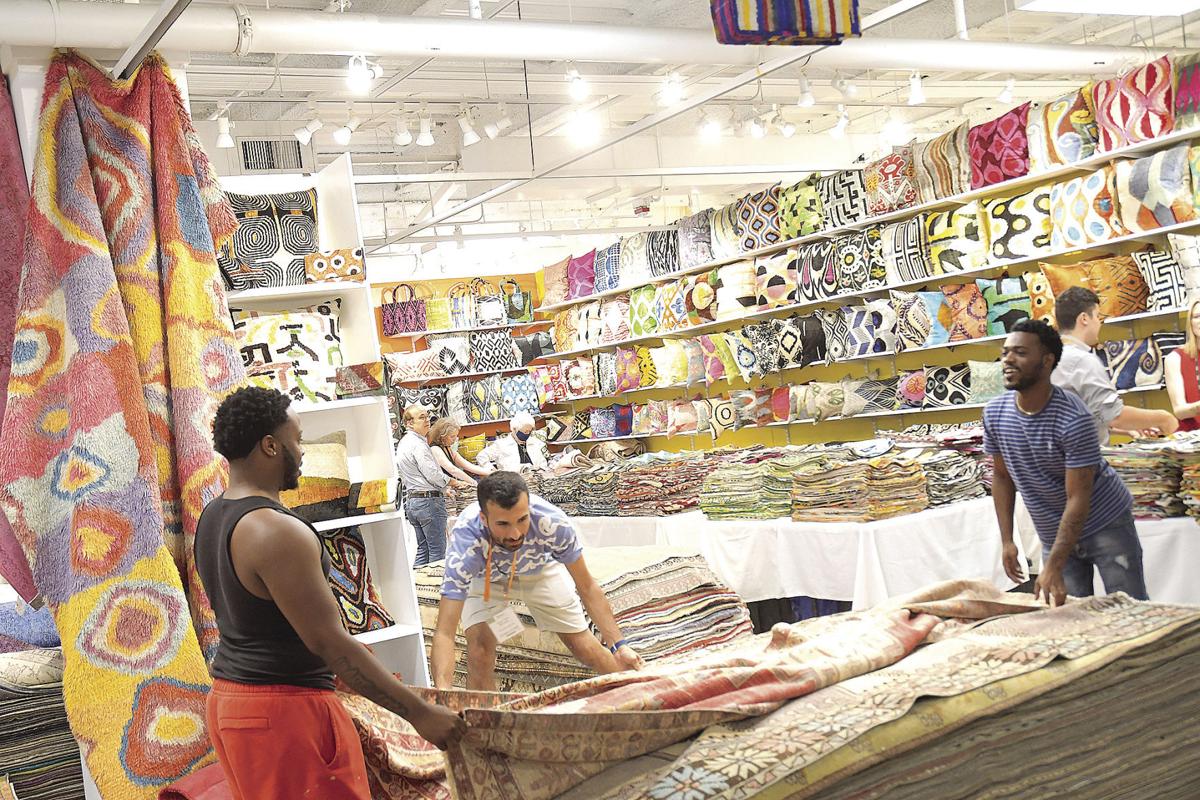 Vendors with MD Home showroom located at the Suites at Market Square sort through fabric samples during opening day at the High Point Market.

Marketgoers make their way across Main Street at the intersection of Commerce Avenue during opening day of the High Point Market on Saturday.

Vendors with MD Home showroom located at the Suites at Market Square sort through fabric samples during opening day at the High Point Market.

HIGH POINT — Organizers of the High Point Market hope to edge closer to economic normalcy with the spring furniture trade show that officially started Saturday, more than a year after the coronavirus pandemic disrupted the city’s signature event.

Business between home furnishing designers and buyers for retail stores and furniture and accessory exhibitors from across the country will take place in the downtown showroom district through Wednesday. Already this spring’s Market marks a welcome contrast to the spring trade show last year, which was canceled for the first time since World War II because of the COVID-19 threat.

Market organizers don’t expect the same attendance this week as a normal trade show. But they hope the attendance will improve from the make-shift fall Market this past October.

Typically the Market draws 75,000 to 80,000 visitors. Even in its pandemic-impacted state, the Market represents the largest-single annual economic event in North Carolina and the world’s largest home furnishings trade show.

Showrooms only are open to trade show representatives, not the general public. But the Market has a major impact each spring and fall on the local economy as guests spend money at businesses such as restaurants, hotels, dry cleaners and florists, and with construction firms and contractors leading up to the event.

High Point Market Authority President Tom Conley said the lingering impact of the pandemic will stunt trade show attendance this week. International marketgoers, who typically represent 10% of attendance, will have a diminished presence at the spring Market, Conley told The High Point Enterprise.

“With the travel restrictions, people can’t get visas,” he said. “And even if they can get a visa, they have to be quarantined when they get back.”

Preregistration by domestic buyers for this week’s Market is down 15% from the last spring trade show in April 2019, Conley said. So marketgoers face the reality that, as exhibitors, they may not see as many retail store buyers and designers and, as buyers and designers, they might not encounter as many new products.

However, Conley said that attendance at Premarket a month ago was much stronger than normal.

“The last two Premarkets have been record-setters in terms of exhibitors that were open and buyers that attended,” Conley said. “So if you look at the spring time frame, we may be down only 5% to 7% if you count the attendance for Premarket.”

Also, attendance at the spring trade show will be better than last fall’s Market, when the number of buyers was off 60% from the pre-pandemic fall trade show in October 2019, Conley said.

“We are slowly getting back to what normal is going to look like,” he said.

High Point City Councilman Chris Williams said he’s encouraged by the rebound in Market since last year. Williams brings a pair of perspectives to the trade show — as a longtime councilman and a logistics manager for International Market Centers.

The pace of orders for freight and caterers in IMC showrooms is up with the lifting of COVID-19 emergency order restrictions, Williams told The Enterprise.

“That’s a positive trend,” he said. “I think it’s going to look a whole lot better than it did last year.”

Conley said Market organizers made the right call at the first of the year to postpone the spring trade show from its traditional date in April to June. The decision was made as vaccines were first being distributed on a wide-scale basis across the nation, and Market organizers decided to put off the trade show for two months to maximize how many people could get inoculated.

“Think of where we were in respect to COVID in April compared to where we are now,” Conley said. “The number of people who have been vaccinated is up. The mask mandate has been taken away.”

Conley and Williams both say that they remain encouraged with the confidence home furnishings companies are showing through major investments in the Market despite the pandemic.

IMC officials said the company’s 17 Market properties will showcase 158 new, expanding and relocated showrooms and temporary exhibits among its more than 1,000 total resources at the trade show. IMC will welcome 70 new exhibitors, while another 88 existing brands will expand or relocate for the spring Market.

“A successful High Point Market is crucial to the continued recovery of our industry, and IMC is proud to play its part in bringing buyers and sellers together on home furnishing’s biggest stage,” said Scott Eckman, IMC chief revenue officer.