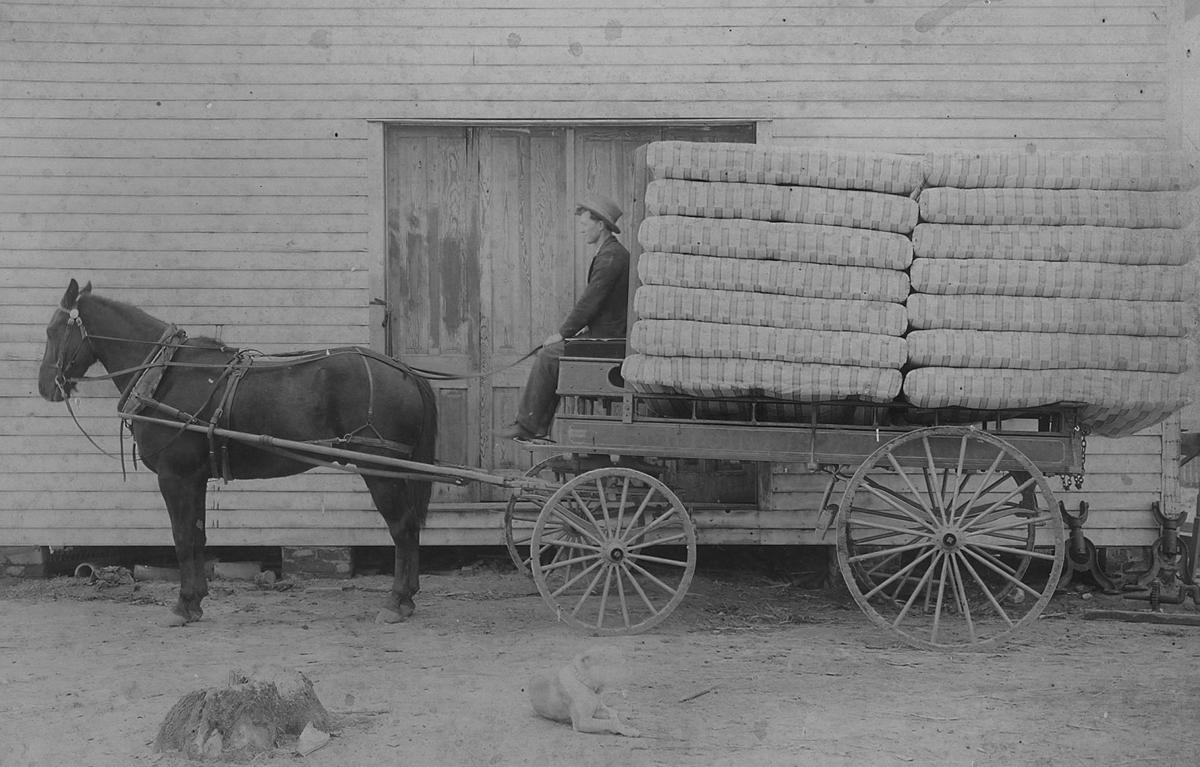 This is the photo The High Point Enterprise published with Elwood’s obituary on Sept. 9, 1923. The photo was taken in front of a mattress manufacturing facility operated by Elwood’s owner, O.A. Kirkman. 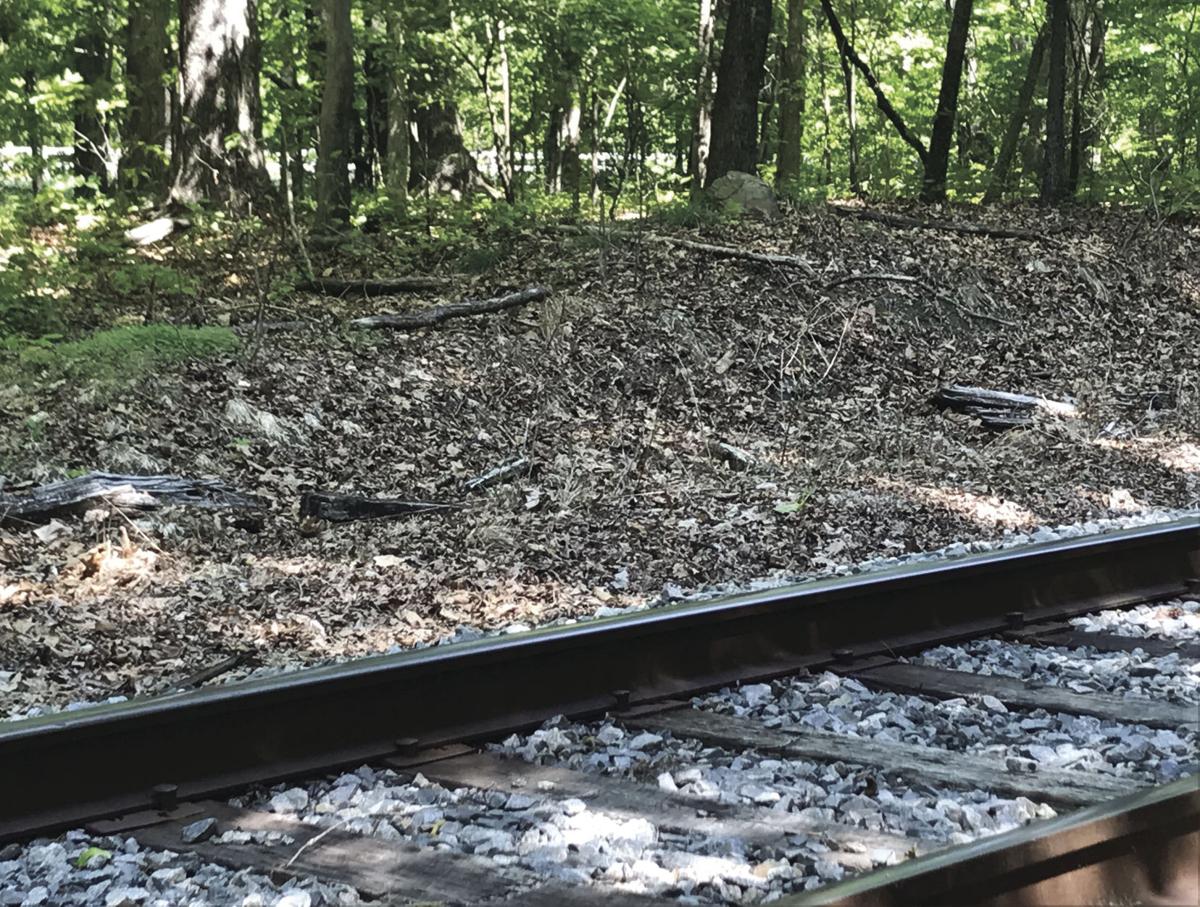 O.A. Kirkman’s beloved horse, Elwood, is believed to be buried just beyond the embankment on the far side of this railroad track near Prospect United Methodist Church. Railroad crews attended to the maintenance of the gravesite from 1923, when Elwood died, until 1960, when the railroad was sold.

This is the photo The High Point Enterprise published with Elwood’s obituary on Sept. 9, 1923. The photo was taken in front of a mattress manufacturing facility operated by Elwood’s owner, O.A. Kirkman.

O.A. Kirkman’s beloved horse, Elwood, is believed to be buried just beyond the embankment on the far side of this railroad track near Prospect United Methodist Church. Railroad crews attended to the maintenance of the gravesite from 1923, when Elwood died, until 1960, when the railroad was sold.

You don’t ordinarily read horse obituaries in the newspaper, but it appears that Elwood — perhaps the best-known horse in High Point history — was no ordinary horse. And when Elwood died nearly a century ago, The High Point Enterprise published a heartfelt tribute.

“Elwood is dead!” the paper reported. “He fought a valiant fight, but death conquered, and a life of faithful service is ended. His lifeless body was placed in a coffin built especially for him, and if such faithful servants had souls, Elwood’s would go to the far beyond to receive his just reward.”

The year was 1923 — a time when automobiles were becoming increasingly popular, but horses and horse-drawn wagons were still common sights on the streets of High Point.

According to the obit, Elwood — alternately described as a “little black horse” and a “full-blooded fancy boy stock horse” — had belonged to prominent High Pointer O.A. Kirkman for more than 31 years, since Kirkman had bought the horse as a colt at an auction. He named his horse after J. Elwood Cox, the prominent High Point banker and namesake of the old Elwood Hotel, but it’s not known why.

What we do know is that Kirkman, who was general manager of the High Point, Thomasville & Denton Railroad Co., or the HPT&D, cherished Elwood not only as a companion animal and saddle horse, but also as a business partner capable of delivering a wagonload of mattresses for one of Kirkman’s other business interests, the High Point Bedspring Co. In fact, Elwood’s obituary included a photo of the horse hitched to a wagon stacked with mattresses.

Elwood played another prominent role in Kirkman’s life, according to the obituary.

“The one thing of which Elwood was proud was the fact that he figured rather conspicuously in the romance that culminated in the marriage of Mr. and Mrs. Kirkman,” The Enterprise wrote. “He pulled the buggy during the days of their courtship and brought the preacher who performed the marriage ceremony.”

Elwood became a familiar sight on city streets, and High Pointers apparently loved him — why else would The Enterprise have bothered to publish an obituary for a horse? In addition to his mattress deliveries, Elwood could be seen taking the Kirkman family on sleigh rides whenever it snowed.

According to family lore, the Kirkmans once took Elwood with them on a vacation to Virginia Beach, and when they led him up a dune so he could see the ocean, the little horse roared his approval.

High Point was home, though, and Elwood’s obituary even reported that after one out-of-state visit, he was thrilled when he got off the train and stepped on High Point soil again.

“The prodigal son returning home had nothing on Elwood as far as it concerned happiness,” The Enterprise wrote. “He ran around, kicked up his hind legs and was as happy as the baby with his first toy.”

Sadly, Elwood died in early September 1923, after slipping and falling while making a delivery on a High Point street. Kirkman called a veterinarian immediately, but there was nothing he could do — Elwood had to be put to sleep.

“Elwood is gone,” the paper wrote, “but he is not forgotten by those who knew and loved him.”

Here’s the kicker, though — that’s not the end of Elwood’s story.

According to a published history of Kirkman’s railroad, the HPT&D, Kirkman buried Elwood — in the aforementioned custom-made coffin — in a patch of woods alongside the tracks of the HPT&D. The book’s author, who worked for the railroad for more than 40 years, said the burial site was just over the county line in Randolph County, not far from Prospect United Methodist Church. He included a photo of the nondescript burial site.

And get this: HPT&D railroad crews actually maintained Elwood’s unmarked gravesite for 37 years, until the railroad was sold in 1960.

“I thought that was an interesting tidbit, but I guess if you run the railroad, you can have them do whatever you want them to do,” said Tom Kirkman, of High Point, who is related to O.A. Kirkman.

A few years back, when Tom got a copy of the book about the HPT&D and read about Elwood, he set out to find the horse’s exact burial spot. Even with the book’s photo of the site, it took several searches before he finally found what he believes to be Elwood’s gravesite.

“One day, I noticed a large, gray stone perched on the rise next to the track,” he explains. “It seemed oddly out of place, and I figured the railway might’ve placed it there to mark the grave. A few feet further down was a cut in the bank, as if it had been leveled to allow men to carry something back in there. And sure enough, stepping in through the cut was a large, rectangular depression, with a rise in the middle, about 12 feet by 10 feet. Once I saw it, I knew that was it.”

For nearly a century now, that’s been Elwood’s final resting place, poignantly buried alongside the railroad track by the master who loved him so fiercely. The cherished horse may be long gone, but his legacy lives on.