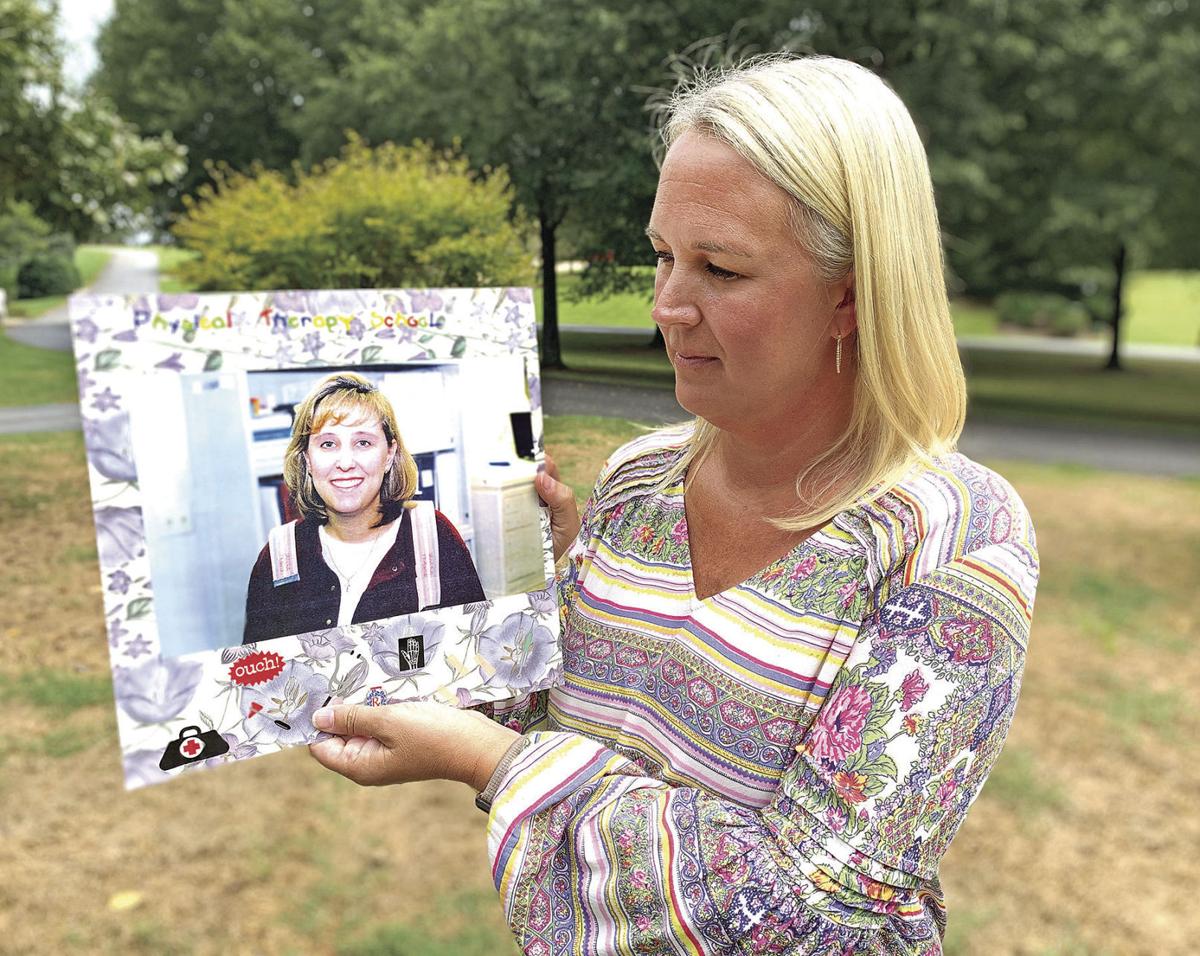 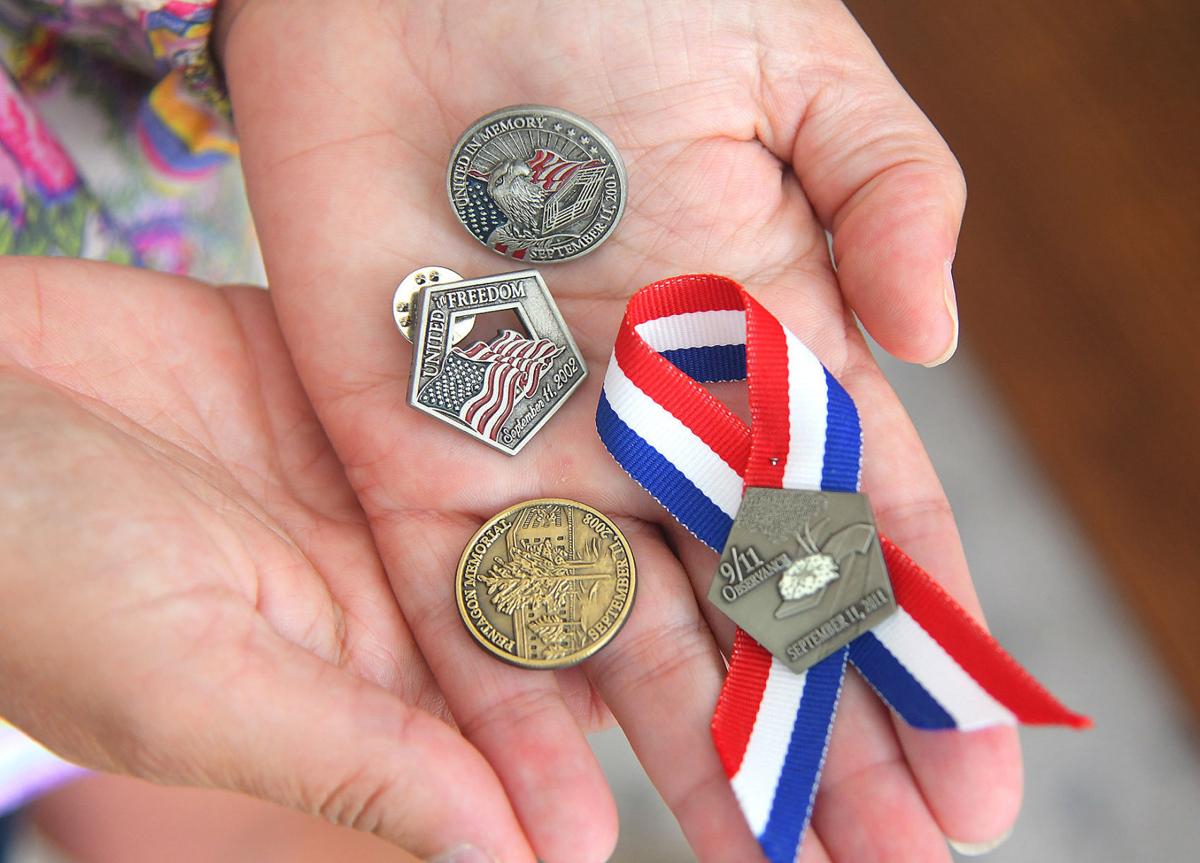 Above: Jennifer Ayers shows some of the commemorative pins she has received at 9/11 memorial services, which she attended to honor the memory of her sister, Sandy Teague. Right: Jennifer Ayers, formerly of High Point and now of Colfax, holds a photo of her sister, Sandy Teague, who was on American Airlines Flight 77, the airliner that was hijacked and crashed into the Pentagon on Sept. 11, 2001. 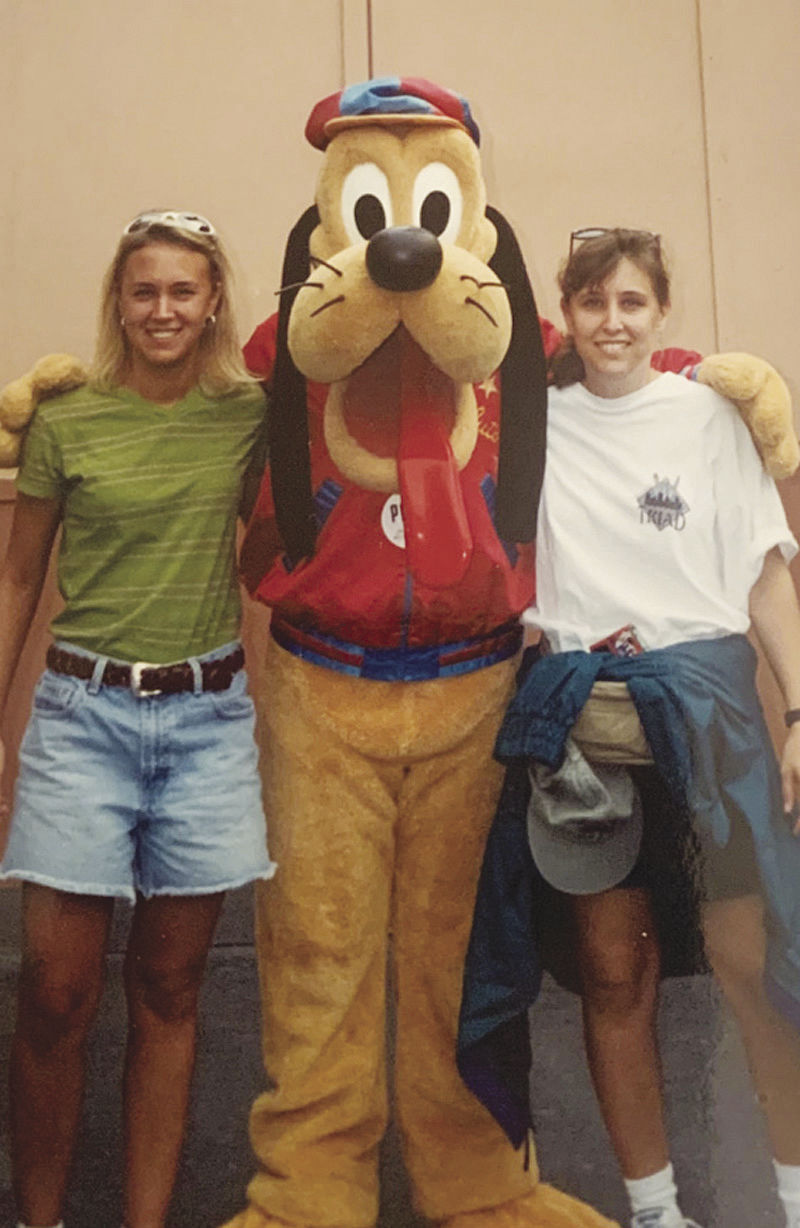 Sisters Jennifer Ayers, left, and Sandy Teague, pictured here in their younger years, pose for a photo together at Walt Disney World, one of Sandy’s favorite places to visit. Sandy died in the terrorist attacks of Sept. 11, 2001, at the age of 31.

Above: Jennifer Ayers shows some of the commemorative pins she has received at 9/11 memorial services, which she attended to honor the memory of her sister, Sandy Teague. Right: Jennifer Ayers, formerly of High Point and now of Colfax, holds a photo of her sister, Sandy Teague, who was on American Airlines Flight 77, the airliner that was hijacked and crashed into the Pentagon on Sept. 11, 2001.

Sisters Jennifer Ayers, left, and Sandy Teague, pictured here in their younger years, pose for a photo together at Walt Disney World, one of Sandy’s favorite places to visit. Sandy died in the terrorist attacks of Sept. 11, 2001, at the age of 31.

COLFAX — Twenty years later, Jennifer Ayers still remembers the ironic phone conversation she had with her brother the morning of Sept. 11, 2001.

Ayers, who was living in High Point at the time but now lives in Colfax, had called her brother in Texas to tell him about their sister, Sandy Teague. Jennifer was worried.

Sandy, who lived and worked in the Washington, D.C. area, had been scheduled to fly out of Washington’s Dulles International Airport that morning for the vacation of a lifetime — a three-week trip to Australia. But Jennifer had heard the shocking news about commercial airliners — including a flight that had originated at Dulles — being hijacked and flown into buildings, kamikaze-style.

Family members had been unable to contact Sandy or find out which flight she was on, and they feared she might’ve been on one of the hijacked planes.

“It’s most likely not,” Jennifer’s brother, Chris Teague, reassured his sister over the phone. “I mean, think about all the planes in America that take off every single day. What are the chances that it would be her plane?”

He was right — the chances were extremely slim.

But he was also wrong — it was, in fact, Sandy’s plane.

A trip that had been in the works for nearly a year came down to a handful of random choices: The day Sandy chose to leave. The time of her departure. The airport she flew out of. The airline she settled on. The specific flight she booked.

And so it was that Sandy Teague, despite incredibly slim odds, found herself aboard American Airlines Flight 77.

The hijacked plane that slammed into the Pentagon.

Growing up in Hickory, Jennifer and Sandy had squabbled like sisters often do. Sandy was six years older, “so I guess I was the annoying little bratty sister,” Jennifer says.

As they grew older, though, they also grew closer, despite the miles that separated them. By September 2001, Sandy, now 31, had become a physical therapist at Georgetown University Hospital, and Jennifer, 24, had settled in High Point, where she worked in the office at Baker Furniture and was busy planning her wedding for the following June.

The two sisters kept in touch as much as possible, mostly by email. Jennifer still has a printout of their final conversation — on Sept. 6, 2001 — when Sandy promised to attend Jennifer’s wedding, rather than a close friend’s wedding scheduled for the same day.

Five days later, Sandy boarded Flight 77 to Los Angeles, the first leg of her long-awaited trip to Australia. She was going by herself — not unusual for her, Jennifer says — because her friends and boyfriend didn’t have enough days off for a three-week trip. She had it all planned out — hiking, rafting, sightseeing.

Sandy sat alone in seat 12-F, a window seat. Directly across the aisle, less than 10 feet away from her, sat Majed Moqed and Khalid al-Mihdhar, two of the five hijackers on Flight 77. The plane departed at 8:20 a.m. — not long after Jennifer had arrived for work at Baker Furniture — and was hijacked approximately half an hour later. The aircraft crashed into the Pentagon at 9:37 a.m., killing all 64 people onboard and another 125 in the building.

As news of the terrorist attacks began to break that morning, Jennifer remembered her sister’s trip.

“I didn’t remember what day she was supposed to leave, so I called my mom,” Jennifer says. “She had been on the phone with American Airlines, trying to figure out if it was Sandy’s plane that had crashed into the Pentagon, but all her itineraries said Qantas (an Australian airline), so they weren’t sure yet.”

Jennifer left work and drove to her mother’s house in Winston-Salem, only to find her mom still on the phone with American. As she waited, she called her brother and her father (her parents were divorced) to alert them to the possibility of Sandy being on one of the hijacked planes.

“So much of that day is a blur, but I remember my mom coming downstairs and saying they confirmed that it was Sandy’s plane that crashed into the Pentagon,” Jennifer says. “She was so upset, she could hardly talk.”

The task of notifying her father and brother fell to Jennifer.

“Having to be the person to deliver that news has always haunted me,” she says.

She’s also haunted by thoughts of her sister’s final moments on the doomed airliner, particularly in light of her proximity to the two hijackers across the aisle from her.

“In my head,” she says, “I’ve always replayed these horrible scenarios about who was the first person that they grabbed, or how her last moments alive were probably pretty horrible.”

Jennifer also struggles with the memory of watching her parents grieve for their daughter. She remembers how difficult it was for them not even having a body to bury — only parts of a body, and only after waiting endless days for DNA testing to confirm which parts were Sandy’s.

“Watching (my parents) was pretty awful,” Jennifer says softly. “That’s not how things are supposed to go — you’re not supposed to bury your child when she’s only 31 years old.”

Or your sister, for that matter.

Twenty years later, Jennifer has moved on with her life in many ways.

She’s 44 now, and enjoys a career as a massage therapist. She got married in 2002 — in the wedding Sandy had promised to attend — but eventually divorced. She remarried, and she and her husband Nate have two precious boys, 6-year-old Teagan and 4-year-old Sterling. They moved from High Point to Colfax a couple of years ago.

In other ways, though, Jennifer can’t move on from the horror of Sept. 11, 2001. Sandy wasn’t able to move on — she’s forever 31, frozen in time by an unspeakable tragedy — and Jennifer remains her younger sister, clinging to cherished memories and longing, aching to make more.

“Although life continues, every single day I still think about Sandy,” Jennifer says. “I think about how much she missed out on in life.”

Sandy wasn’t married, but she had a steady boyfriend named Frank Huffman. On the morning of the attacks, he drove Sandy to the airport, then reported to his job at the Navy Annex — a building which stood, ironically, right beside the Pentagon.

By all accounts, Sandy had found herself a good man. After her death, he stayed in touch with her family. Last year, on the eve of Sept. 11, he visited Jennifer’s family to meet her two boys and give them some patches from his military career.

Sadly, Frank died a couple of weeks ago from cancer, and Jennifer went to his memorial service. Even now, though, she can’t help but wonder if Sandy and Frank would’ve gotten married. Would they have had children? What would their lives have been like? What would her own life have been like with her sister still in it?

“I’m so very sad that my children will never know her and what an amazing, wonderful, smart, giving, caring, talented and adventurous aunt she would’ve been to them,” Jennifer says.

“I often think of how our lives would’ve been different and how the children she never got the opportunity to have would’ve been the best friends of my two boys. How we will never get to go on family vacations and make cherished memories together.”

For Jennifer, that’s been one of the hardest truths of Sept. 11, 2001: Sometimes the most poignant memories are the ones that never get made.