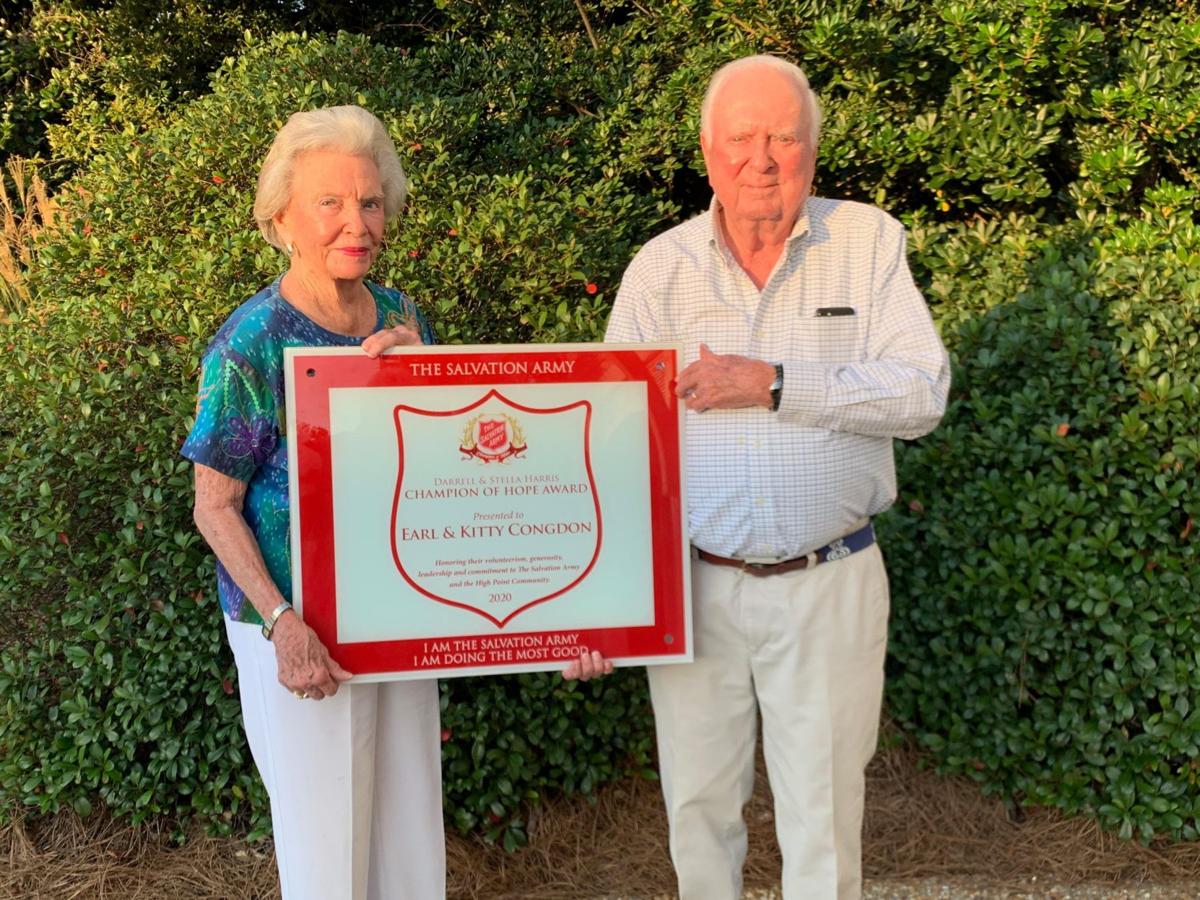 Kitty and Earl Congdon were one of the dual recipients of the 2020 Salvation Army’s Darrell and Stella Harris Champion of Hope Award. 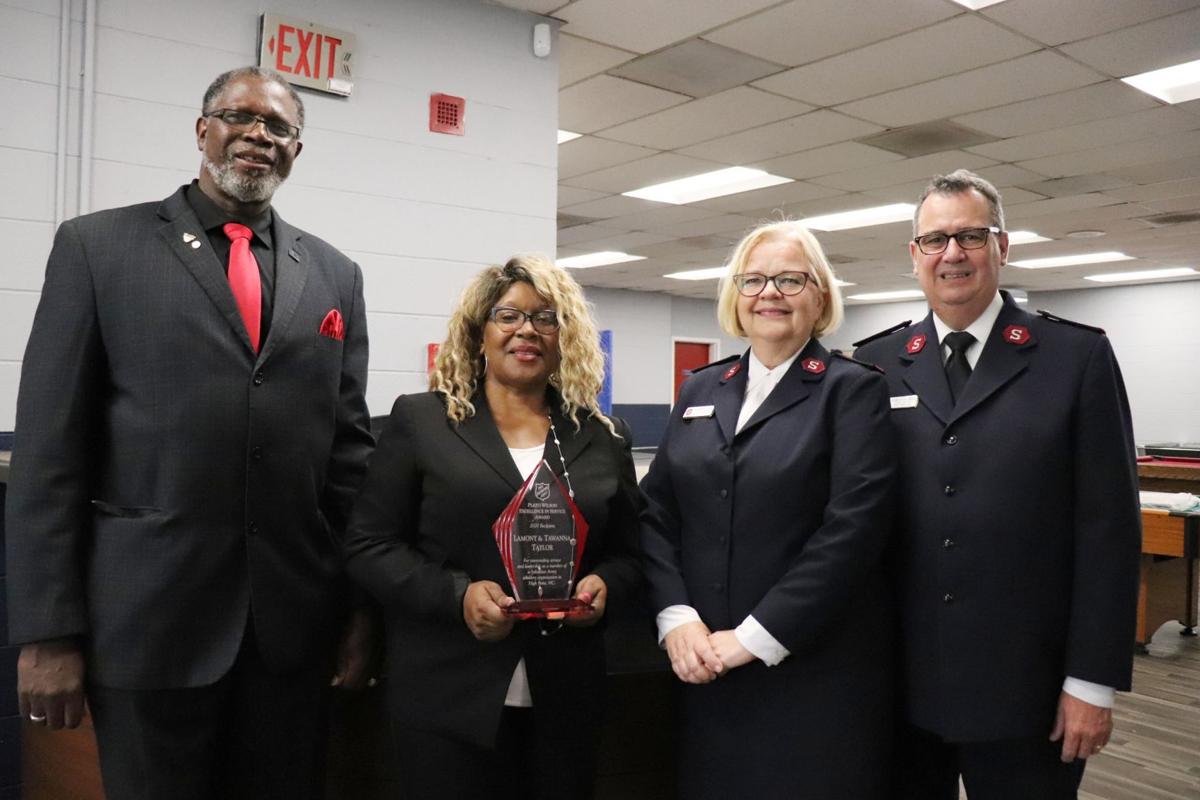 From left, LaMont and Tawanna Taylor, recipients of the Plato Wilson Excellence in Service Award, are pictured with Salvation Army Capts. Lars-Otto and Ingrid Ljungholm. 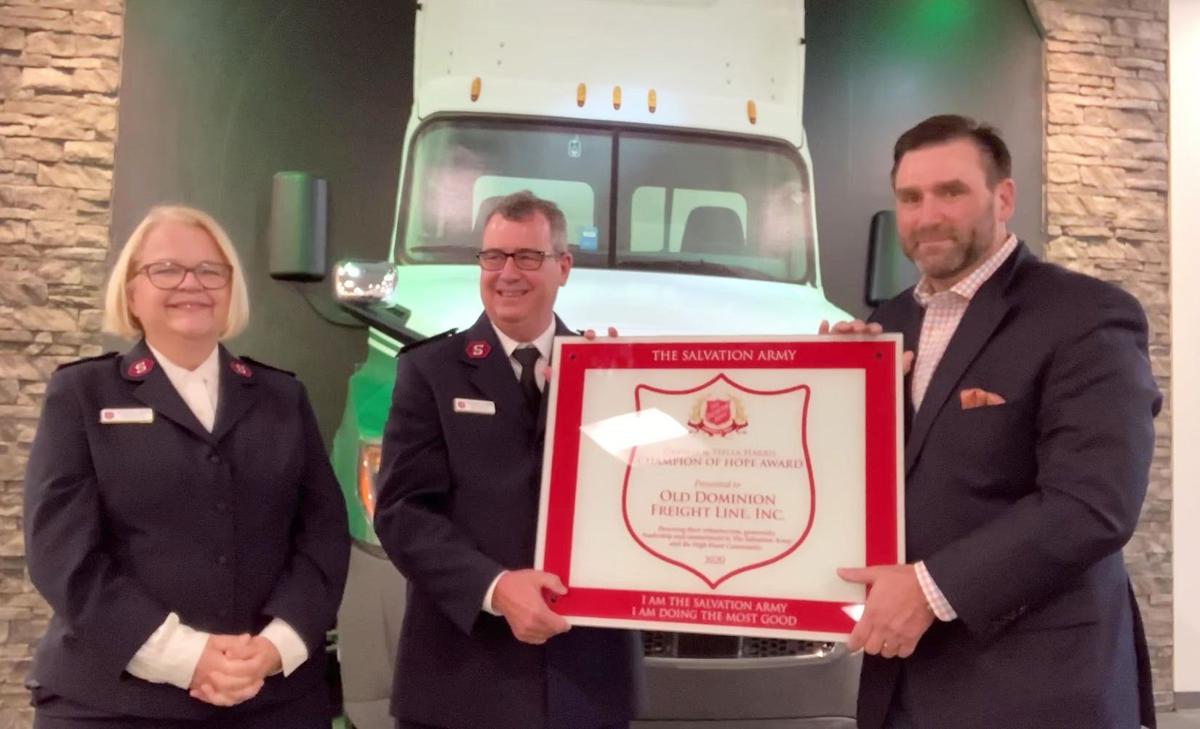 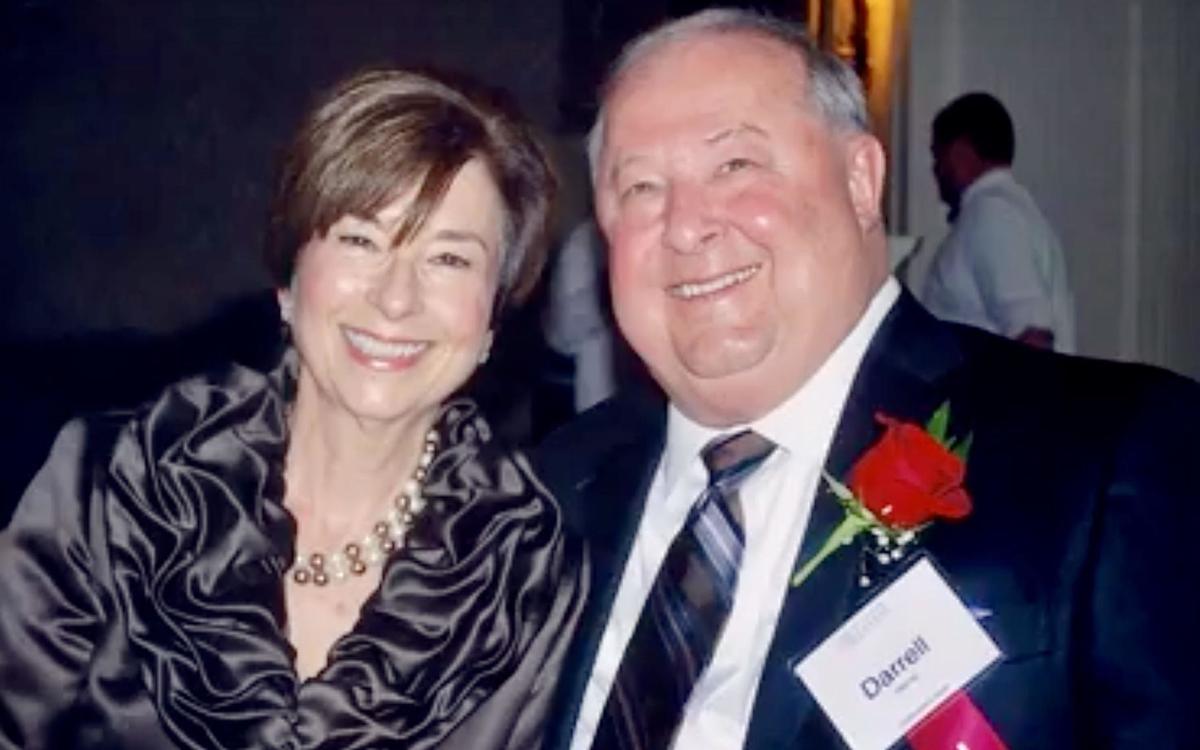 The Salvation Army’s Champion of Hope Event is named in memory of Stella and Darrell Harris. 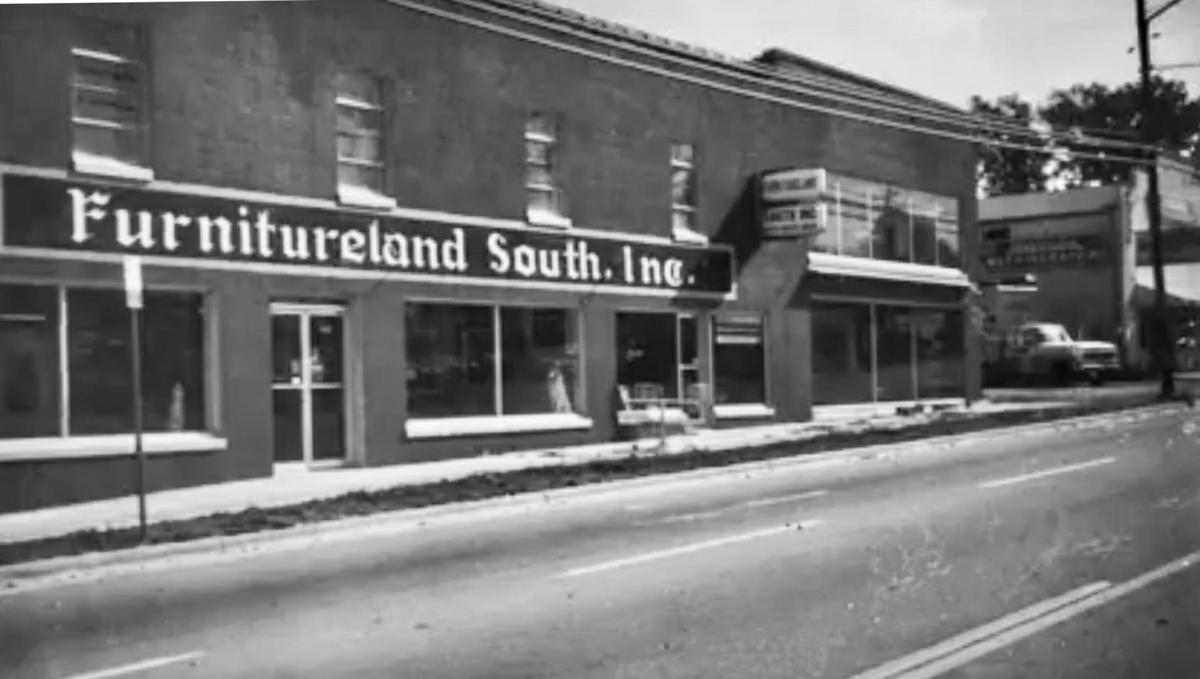 This was the first location on South Main Street for Furnitureland South, a former garage rented by Darrell and Stella Harris. 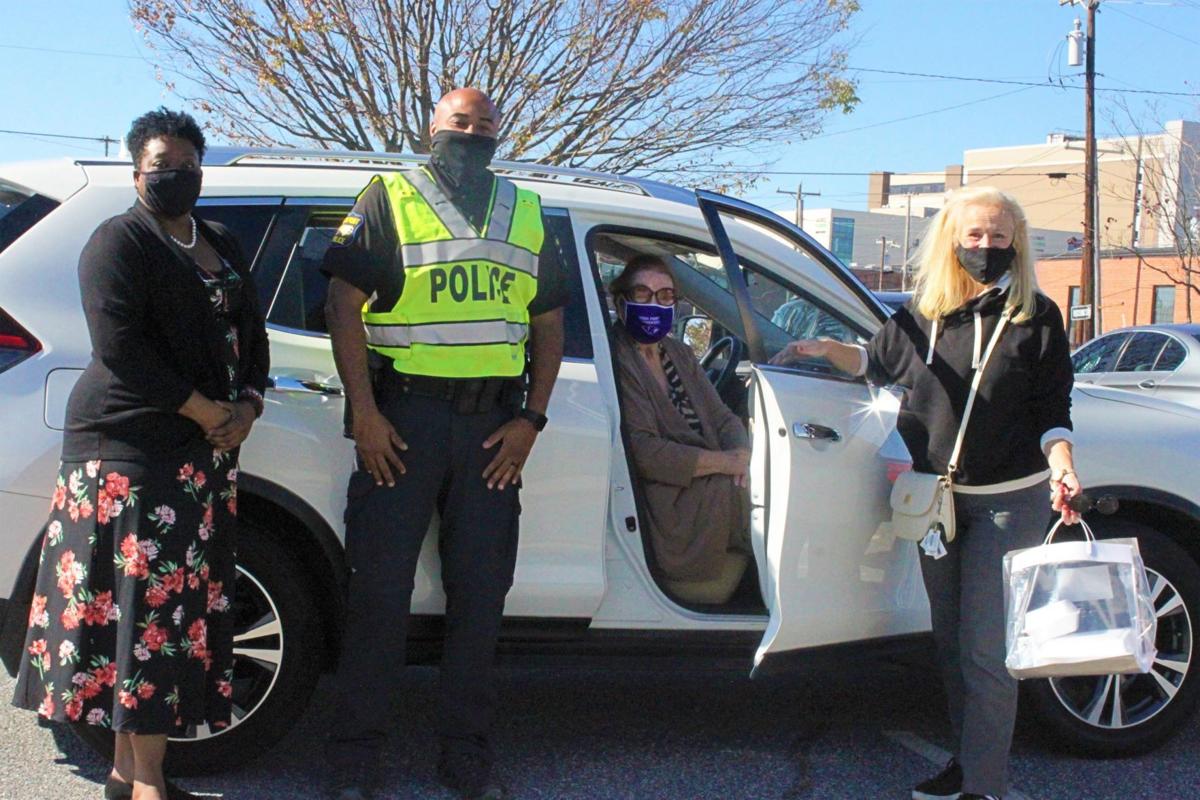 Kitty and Earl Congdon were one of the dual recipients of the 2020 Salvation Army’s Darrell and Stella Harris Champion of Hope Award.

From left, LaMont and Tawanna Taylor, recipients of the Plato Wilson Excellence in Service Award, are pictured with Salvation Army Capts. Lars-Otto and Ingrid Ljungholm.

The Salvation Army’s Champion of Hope Event is named in memory of Stella and Darrell Harris.

This was the first location on South Main Street for Furnitureland South, a former garage rented by Darrell and Stella Harris.

I am not going to start this column with the usual “C” word. In keeping with the “C” theme, this week I am “Celebrating Champions.” Like you, I look forward when we can celebrate our High Point champions by feting them in person, shaking their hand, giving applause or even a pat on the back. We all miss that personal connection. For now, we must remain virtual.

This was the fourth year the Salvation Army presented the Darrell and Stella Harris Champion of Hope event. As you probably know, they founded Furnitureland South in a small rented space on South Main Street. Before that Darrell sold furniture out of a catalog! Today Furnitureland South is the largest retail furniture store in the world. When both passed away, Chuck Portaro, who was not only Darrell’s right-hand man but also a dear friend, wanted to do something to help the community and memorialize his legacy. That became the Champion of Hope. What an appropriate name. The Harrises’ sons, Jeff and Jason, loved the idea. The first year featured Jenna Bush, followed by Jackie Joyner-Kersee and last year Nicholas Sparks, and all with a silent auction.

This was the first for Salvation Army Capts. Ingrid and Lars Ljungholm. They opened in tandem, alternating the introduction, “In a normal year we would be dining at the High Point Country Club browsing auction items and laughing with our dearest friends in the ballroom. While COVID-19 has postponed our regular in-person celebration we could not let the changes and challenges of this year keep us from recognizing our award recipients and thanking you, our loyal friends, donors and community partners who allow us to help our neighbors in need through the selfless giving of your time, talents and treasures. We thank you for your prayers and continued support all throughout the year. Thank you for allowing us to serve the last, the least and the lost”

After a testimonial from a parent whose children attend the Boys and Girls Clubs, Eric Abeles, the advisory board chair for the Salvation Army, made the plea to make a donation pledge of $25 to $1 million (I’m sure they would accept more than $1 million). Don’t forget the Red Kettles that are out now! Remember 91 cents out of every dollar donated to the Salvation Army goes directly into High Point programs, food and shelter.

I must take a sidebar here to talk about a couple of other Salvation Army board members. First, to thank Angela McGill, CEO and president of the High Point Housing Authority (P.S., Angela, I haven’t forgotten.) for keeping up her Thanksgiving tradition. Each year the Housing Authority holds a Thanksgiving luncheon with homemade sides and desserts for those who have supported them throughout the year. The food is scrumptious! This year it was a drive-thru event. I drove by with my dear friend Chris Greene, who happens to be the only female to be named as a Salvation Army board life member. (Yeah, Chris!) We also took toys for the Housing Authority children. Others who were in line were County Commissioner and 2019 Citizen of the Year Carlvena Foster and the lovely Janet Riley-Wright, who received HPU’s 2020 Alumni Service Award. Congratulations, Janet!

Now on to more congratulations as a dual Darrell and Stella Harris 2020 Champion of Hope Award was presented to Kitty and Earl Congdon and also the employees of Old Dominion Freight Line. The Congdons are very beloved in High Point. They have established a true gift of philanthropy, and that philosophy has carried through to the employees at Old Dominion Freight Line. The company, now one of the largest, was founded by Earl’s father in Virginia with just one truck! (Thank you, Earl, for bringing it to High Point.) What would High Point do without the generosity of the Congdons? (David, I can’t wait to see Congdon Yards, hint, hint.)

Following the example of their founder, the employees of Old Dominion have contributed thousands of hours of service and monetary support to the Salvation Army for many decades. Old Dominion heads its annual Triad Holiday Food Drive and concerts. Its employees hold fundraisers and more. Accepting the award was Chip Overby, senior vice president. Overby noted that the “whole Old Dominion family has been the lifeblood of the Fox 8 holiday concerts since 1992, raising over 6 million cans of food. Our employees live each and every day understanding that delivering on a promise is more than just delivering a pallet or a package on time but how it also affects their community. On behalf of the senior leadership at Old Dominion and the Old Dominion family I would say we’re very humbled very grateful and thankful to receive this recognition.”

The next award was the Plato Wilson Service Award recognizing a member of a Salvation Army advisory board for outstanding service. I thought the world of Plato Wilson. What a character and a longtime member of the Salvation Army Advisory Board. He was known (one of the many things) for selling over $1 million of furniture in one day. Now that was probably 25 years ago! High Point misses him.

This year the Plato Wilson award was given to a husband-wife team, LaMont and Tawanna Taylor, who first became involved with the Salvation Army when their son David was enrolled in the Boys and Girls Clubs. The Taylors have been instrumental in volunteering at numerous Salvation Army events, sponsored sports teams, golf tournaments, dinners and many fundraisers. They have spent time coaching and mentoring youth and created many partnerships and in-kind gifts. Congratulations, LaMont and Tawanna Taylor.

Darrell Harris said, “I’ve always heard, ‘If you help other people in life then they will help you in life.’ It has been a real joy to be able to do that.”