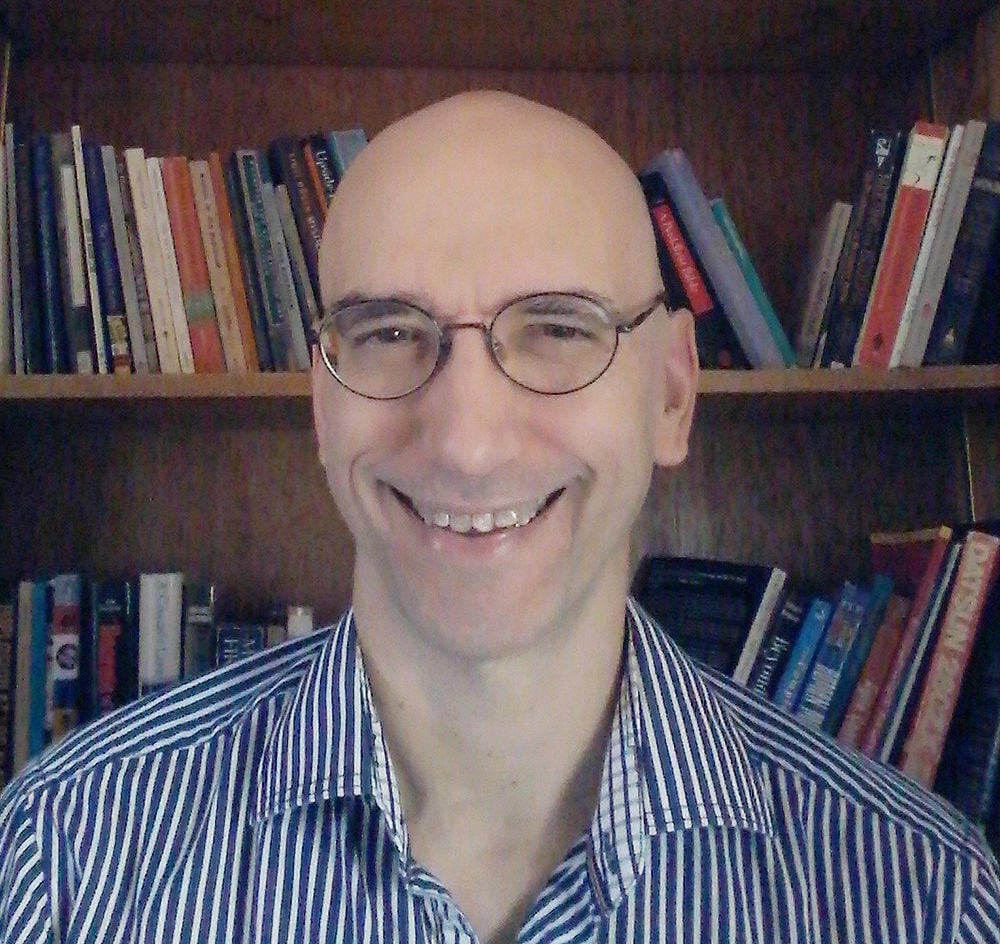 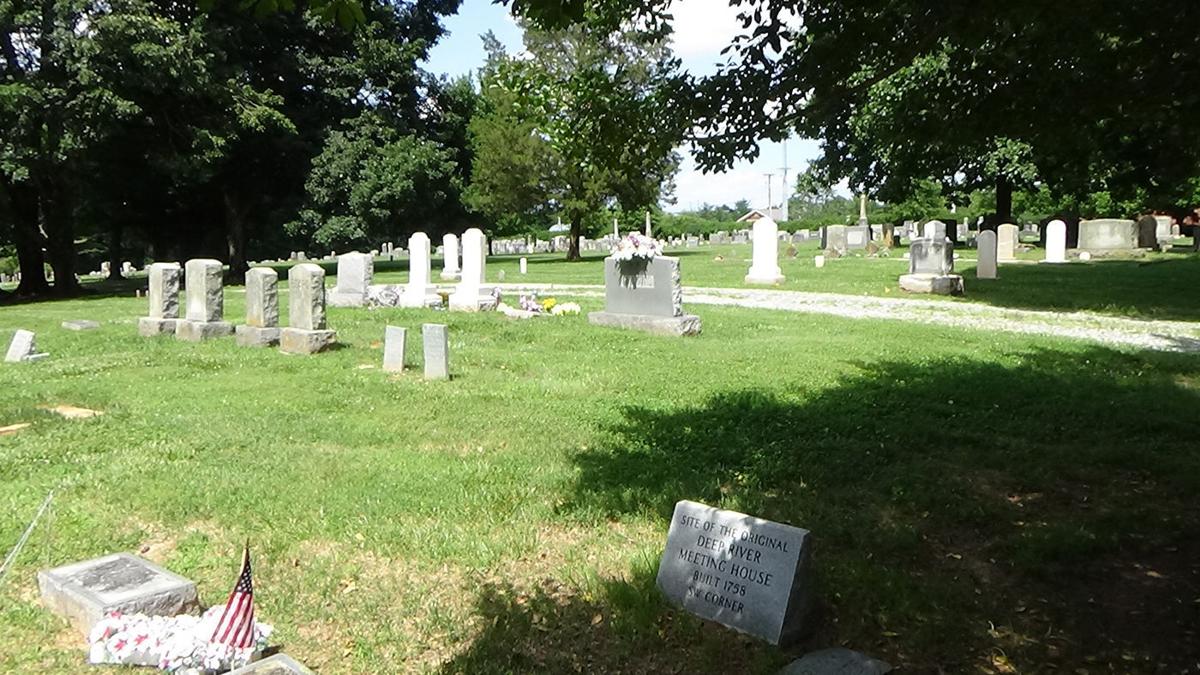 The site of the original Deep River Friends Meeting House in High Point is also featured on the new AmRevNC website. 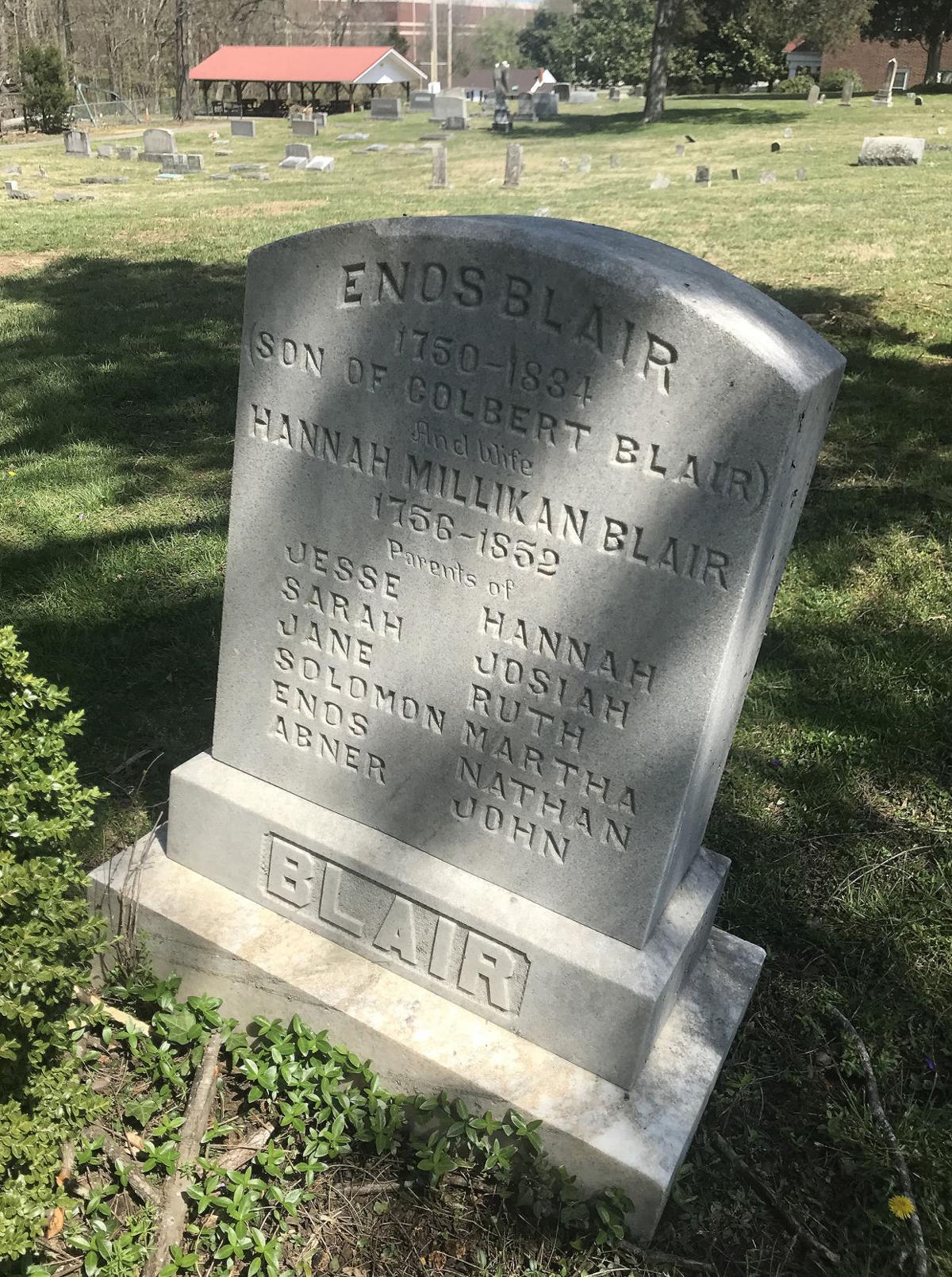 Hannah Millikan Blair lies buried with her husband, Enos, in the Springfield Friends Meeting House Cemetery on E. Springfield Road. Her gravesite is featured on AmRevNC.com, a new website devoted to sites across North Carolina related to the Revolutionary War. Despite her pacifist beliefs as a Quaker, Blair found several ways to contribute to the Patriots’ cause during the war.

The site of the original Deep River Friends Meeting House in High Point is also featured on the new AmRevNC website.

Hannah Millikan Blair lies buried with her husband, Enos, in the Springfield Friends Meeting House Cemetery on E. Springfield Road. Her gravesite is featured on AmRevNC.com, a new website devoted to sites across North Carolina related to the Revolutionary War. Despite her pacifist beliefs as a Quaker, Blair found several ways to contribute to the Patriots’ cause during the war.

HIGH POINT — Nearly 250 years after her exploits during the Revolutionary War, Hannah Millikan Blair is still being recognized for her contributions to the Patriot cause.

The heroic story of Blair, an otherwise little-known Guilford County Quaker woman who belonged to Springfield Friends Meeting in High Point, is one of the highlights on a new website devoted to North Carolina and its role in the American Revolution.

The website, dubbed “The American Revolution Tour of North Carolina,” guides visitors to more than 90 sites across the state related to the war, including Blair’s gravesite at the Springfield Friends Meeting House Cemetery on E. Springfield Road. The site (AmRevNC.com) also recounts the courage Blair displayed during the war, despite her pacifist beliefs as a Quaker.

“One of the great revelations of this project has been how powerful it is to stand at someone’s grave and read about what they did,” says Jim Morgan, the Durham man who founded AmRevNC.

“Hannah, in particular, was taking positions of bravery that we don’t associate with anyone except soldiers. What’s powerful about her story, she makes it clear that throughout the war, there were people of all descriptions who were showing great courage in defense of their principles.”

During the war, soldiers in the Patriot militia often disappeared into the woods in these parts to hide from Loyalist raiders. Blair often took the soldiers under her wings, bringing them food, medicine, clothing and other provisions. She also ferried important messages to them.

Blair also hid soldiers at her home from time to time, and on at least two occasions, her courage and quick thinking — and cool, calm demeanor — saved their lives.

In the first instance, with Loyalists bearing down on the Blair family’s farm, she nonchalantly concealed a couple of Patriot soldiers, says Linda Willard, a local historian who has written numerous articles about area Quakers and their faith.

“She hid them in the corn crib and pretended to have no knowledge of them,” Willard says. “She just sat there shucking corn while the Tories searched all over the farm, and they never found them.”

Another time, as the Tories encroached on her property, Blair ripped open her feather mattress and helped a Patriot militiaman hide inside the mattress, then sat down and began mending the tear. When Col. David Fanning, a notorious Loyalist leader, came in the house and demanded to know the soldier’s whereabouts, Blair just kept sewing and calmly replied, “Thee may search as thee pleases.”

Fanning did search, of course, but he didn’t look inside the mattress.

According to Willard, Blair’s actions were typical of how some Quakers participated in the Revolutionary War without actually fighting.

“Most of them would not fight, so they just found ways around it,” she says. “They could assist like Hannah did without going against their pacifist beliefs. I’m not sure I could’ve done what she did, though.”

Unfortunately, Blair eventually paid a heavy toll for her contributions to the Patriot cause. In 1779, after a battle at Dixon’s Mill in Alamance County, she learned of several soldiers hiding in the local countryside and took them some provisions. On her way back, she was accosted by a band of Tories demanding to know where the militiamen were hiding. Blair refused to give them up, insisting she had merely been delivering food to a sick neighbor. The Tories released her, but they ultimately burned the Blairs’ house and barn and all of their possessions.

Following the war, the U.S. government recognized Blair for her service by giving her a veteran’s pension.

She and her husband, Enos, lie buried together at the Springfield Friends Meeting House Cemetery. Although little is known about Enos, he is believed to have fought with the Patriot militia, according to the AmRevNC website.

The website, which includes maps to help find Blair’s gravesite — as well as a photo of the grave marker — includes several other Revolutionary War sites of interest in Guilford County. Among them is High Point’s Deep River Friends Meeting House, where the British troops of Lt. Gen. Lord Charles Cornwallis camped for a couple of nights in March 1781, just prior to the Battle of Guilford Court House in Greensboro.

Morgan, the website’s founder, spent the better part of a year researching the sites and traveling to each one — logging more than 8,100 driving miles — as he and an assistant, Marty Brown of Mint Hill, documented them.

“When people use the word ‘heritage,’ they tend to focus on the Civil War, and we hear very little about the amazing critical events in the American Revolution that happened here,” Morgan says. “Like the story of Hannah Blair. I wanted to find those stories and make sure they stay alive.”