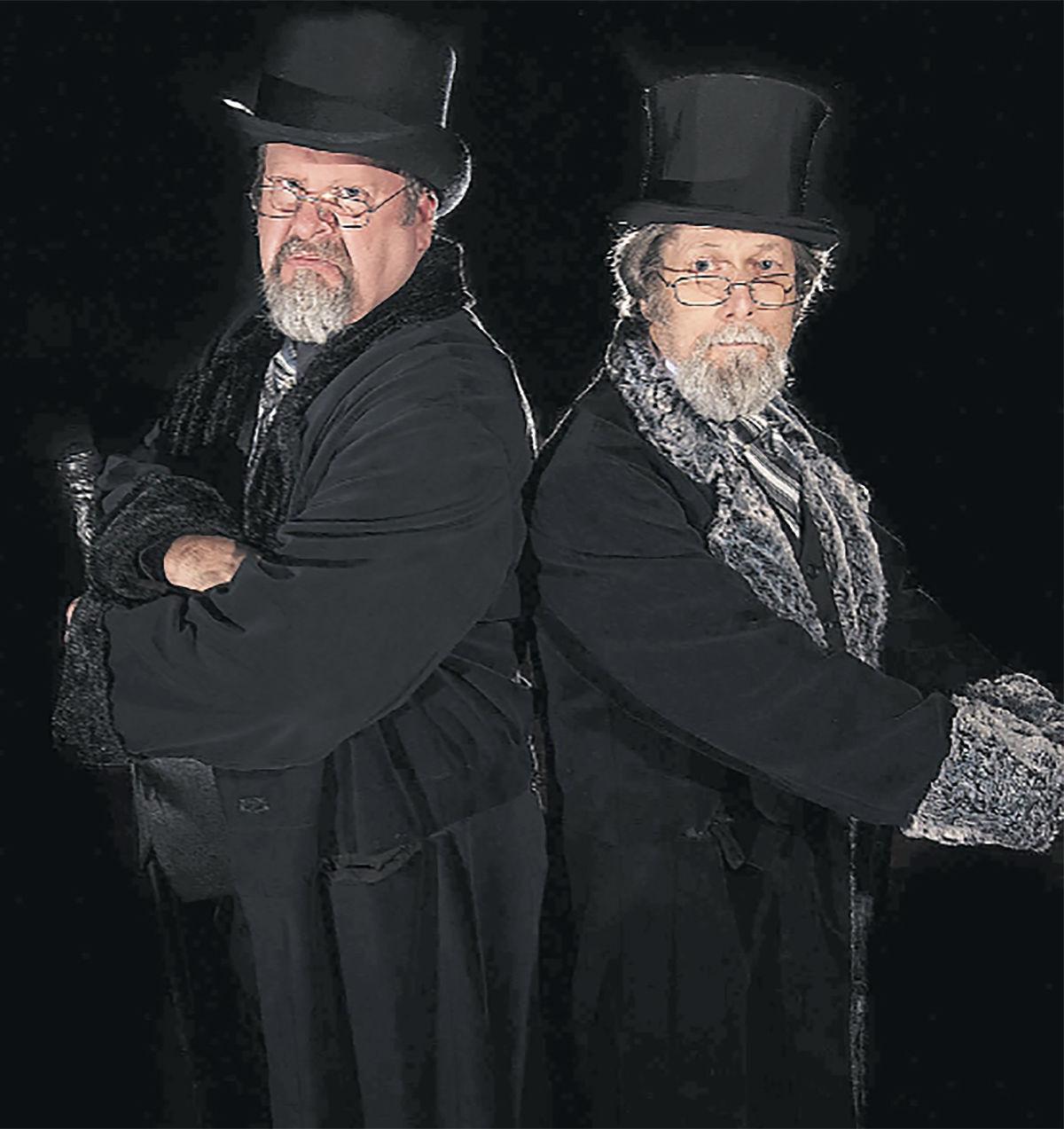 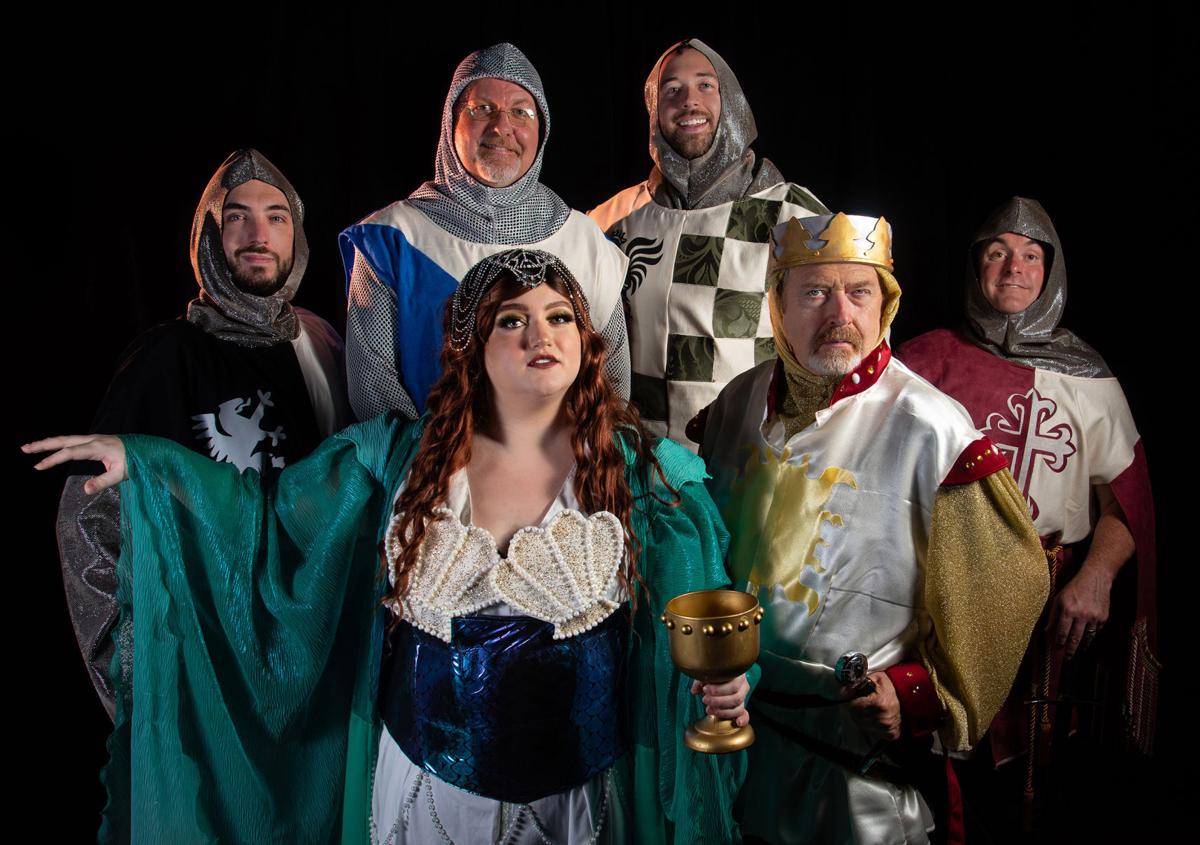 High Point Community Theatre will kick off its 2021-22 season with the lovable musical comedy “Monty Python’s Spamalot.” The cast includes, front row, from left, Muffy Underwood as The Lady of the Lake and Mark Lane as King Arthur, and, back row, from left, Knights of the Round Table Seph Schonekas, Oliver Helsabeck, Jackson Smith and Willy Fisher.

High Point Community Theatre will kick off its 2021-22 season with the lovable musical comedy “Monty Python’s Spamalot.” The cast includes, front row, from left, Muffy Underwood as The Lady of the Lake and Mark Lane as King Arthur, and, back row, from left, Knights of the Round Table Seph Schonekas, Oliver Helsabeck, Jackson Smith and Willy Fisher.

HIGH POINT — In a society weighed down by an ongoing pandemic and relentless political divisiveness, laughter may well be the Holy Grail we’re all looking for these days.

That’s why High Point Community Theatre officials chose to open their new season with one of the funniest musical comedies this side of Camelot, “Monty Python’s Spamalot,” an irreverent parody that mercilessly mocks the legend of King Arthur, Sir Lancelot and the Knights of the Round Table in their quest for the Holy Grail.

“When we were deciding which shows to do this season, ‘Spamalot’ seemed like the perfect choice for the season opener,” said Courtney Lowe, president of High Point Community Theatre. “It’s a comedy from start to finish — two hours of nonstop laughs. It’s very silly — it doesn’t take itself seriously at all — and it’s full of really colorful characters.”

The popular comedy will be presented in four performances — two evening shows and two matinees — Friday through Sunday at the High Point Theatre. On Thursday evening, the cast’s final dress rehearsal will also be open to the public on a pay-what-you-can basis.

Lovingly ripped off from British comedy troupe Monty Python’s 1975 motion picture, “Monty Python and the Holy Grail,” “Spamalot” debuted on Broadway in 2005 and was a huge hit, seen by more than 2 million people and grossing more than $175 million in its run of some 1,575 performances. The show received 14 Tony Award nominations and won in three categories, including Best Musical.

In addition to the farcical adventures awaiting King Arthur and his knights — everything from can-can dancers and rude Frenchmen to killer rabbits and catapulting cows — the show also features references to some of Monty Python’s best-known television skits, including “The Lumberjack Song,” “The Spam Song” and the “Dead Parrot” sketch.

“Spamalot” also skewers some of Broadway’s best-loved musicals, spoofing the likes of “Fiddler on the Roof,” “West Side Story,” “Les Miserables” and others.

“There are so many fantastic references in this show,” says Tami Kress, who directs the HPCT production. “You will laugh from beginning to end.”

Lowe warns that “Spamalot” merits a PG-13 rating for some adult language and adult humor.

Starting the season with a comedy — and a silly one at that — was an intentional effort to provide lighthearted entertainment after HPCT’s long absence from the stage because of the COVID-19 pandemic, according to Lowe.

“The last 18 months have been really rough for the arts community,” she says. “We feel very fortunate to have made it through the pandemic thus far, because not all community theaters can say that. We’re very thankful.”

Because the pandemic is still ongoing, however, this production will look and feel a little different than usual.

“All of the actors are going to be wearing clear masks, the audience is going to be masked, and the orchestra is figuring out how to be masked and play their instruments,” Lowe explains.

“I think the bottom line in all of it is that High Point Community Theatre is so committed to bringing theater back that we’re willing to do whatever we have to do, working within the parameters of safety, to bring it back.”

Following “Monty Python’s Spamalot,” the rest of the HPCT season looks like this:

• December: The seventh annual production of “A Christmas Carol: The Musical,” an upbeat, musical version of Charles Dickens’ classic tale of Ebenezer Scrooge.

• March: “Ruthless: The Musical,” a dark musical comedy that tells the story of Tina Denmark, a beautiful and talented 8-year-old who will do anything to play the lead in the school play.

• May: “Rodgers & Hammerstein’s Cinderella,” a contemporary musical take on the classic fairy tale.

High Point Community Theatre will kick off its 2021-22 season with a production of the comedy “Monty Python’s Spamalot” Friday through Sunday at the High Point Theatre, 220 E. Commerce Ave. Performance times are 7:30 p.m. Friday and Saturday, and 2 p.m. Saturday and Sunday.

Tickets range from $22 to $25 and can be purchased online at www.highpointtheatre.com or www.hpct.net. Tickets can also be purchased by calling the theater box office at 336-887-3001.

There will also be a special pay-what-you-can at the door option at 7:30 p.m. Thursday. This production will be the cast’s final dress rehearsal. No playbills will be distributed that night, and seating is first-come-first-served.