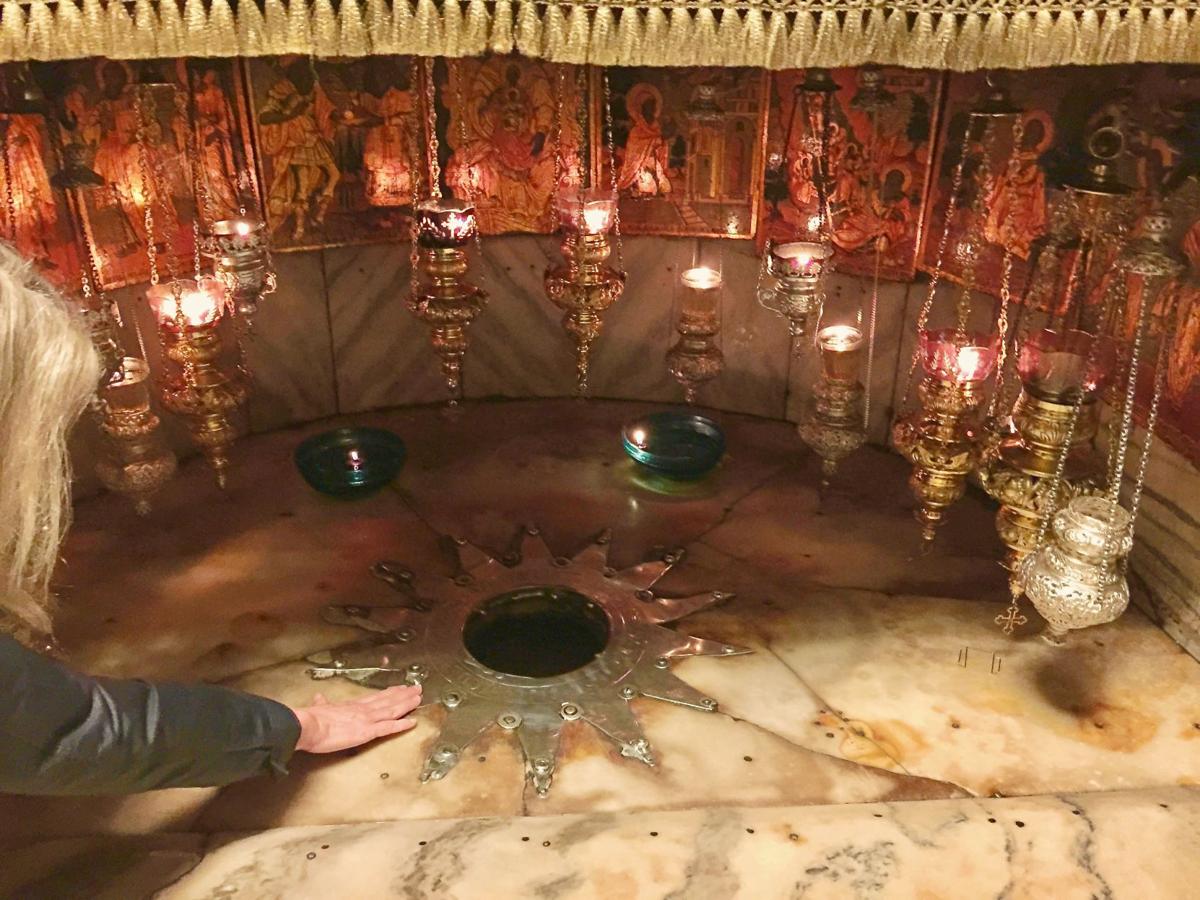 The star in the cave under the Church of the Nativity supposedly marks the exact spot where Jesus was born. 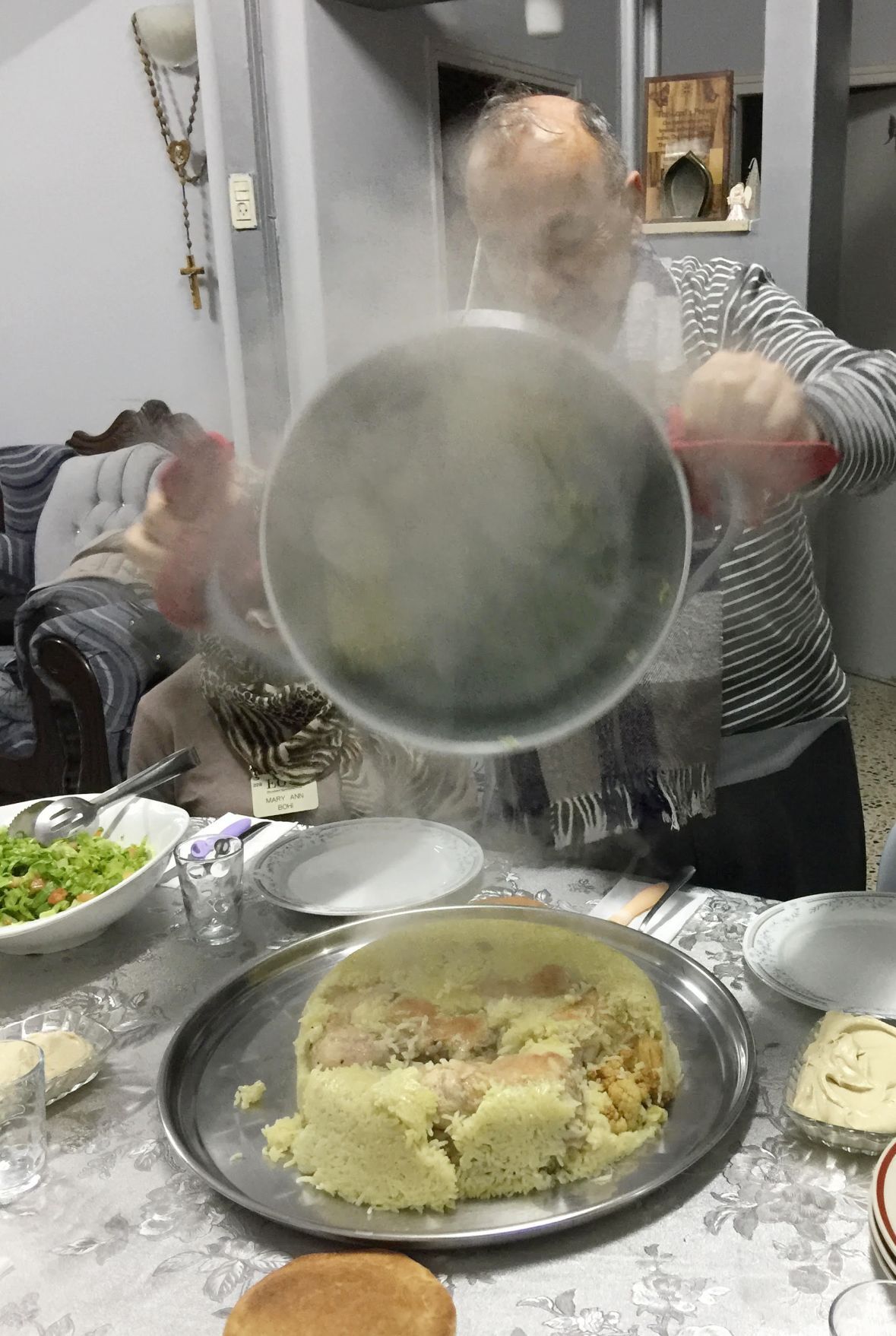 Serving dinner in a private home in Bethlehem, a man unveils his wife’s chickened rice upside down. She also made homemade pita and hummus. 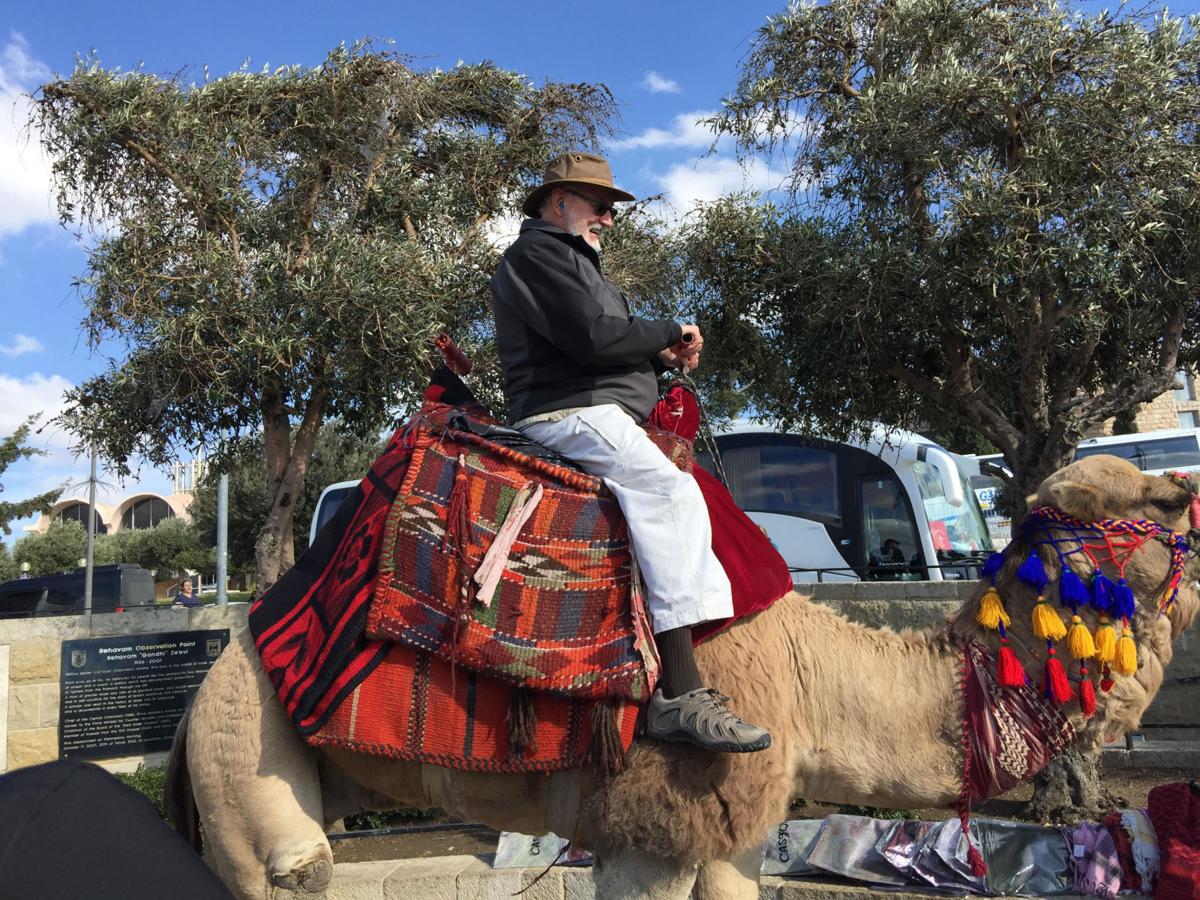 Dale Williams rode a camel in Jerusalem and didn’t fall off. 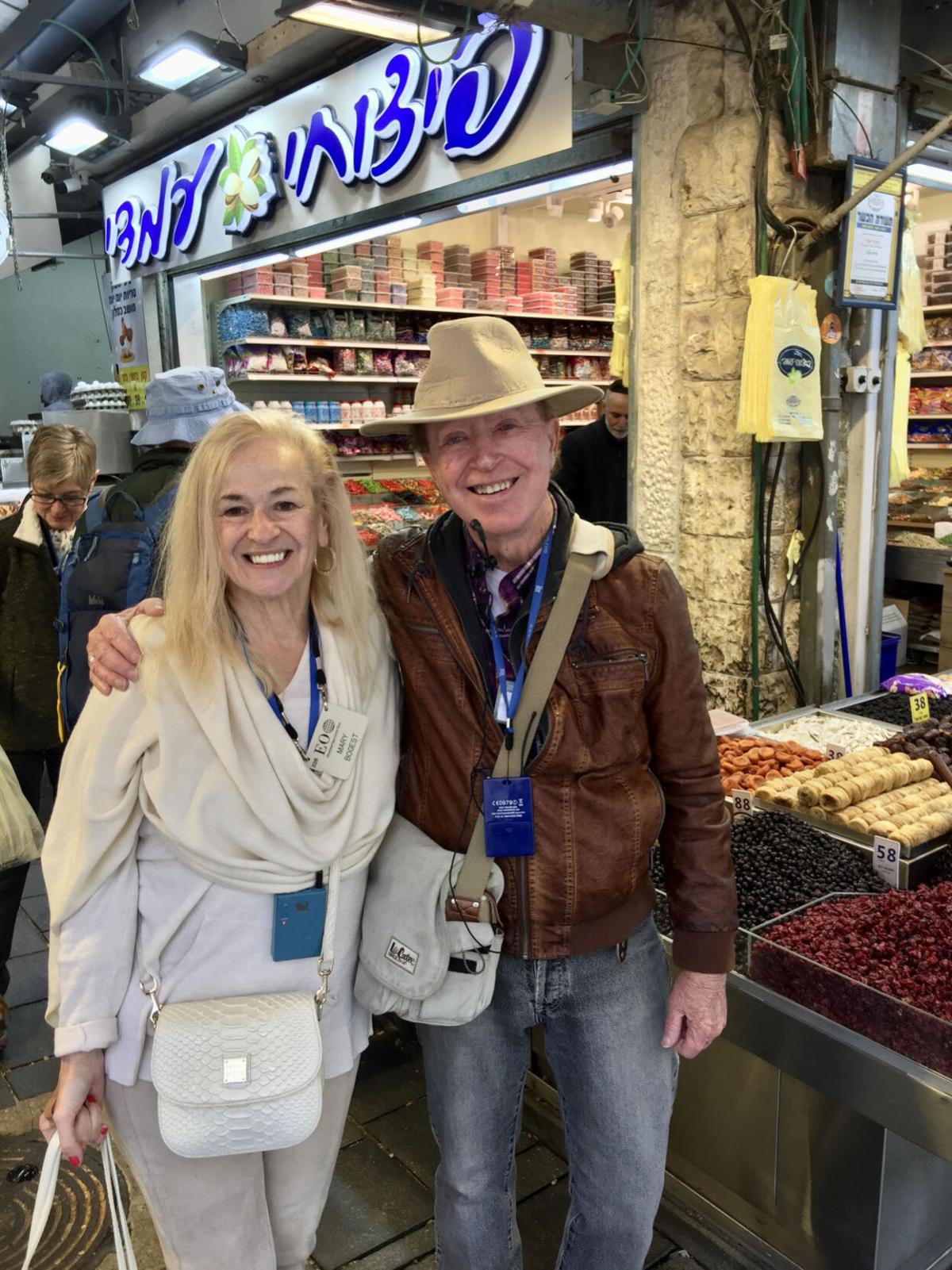 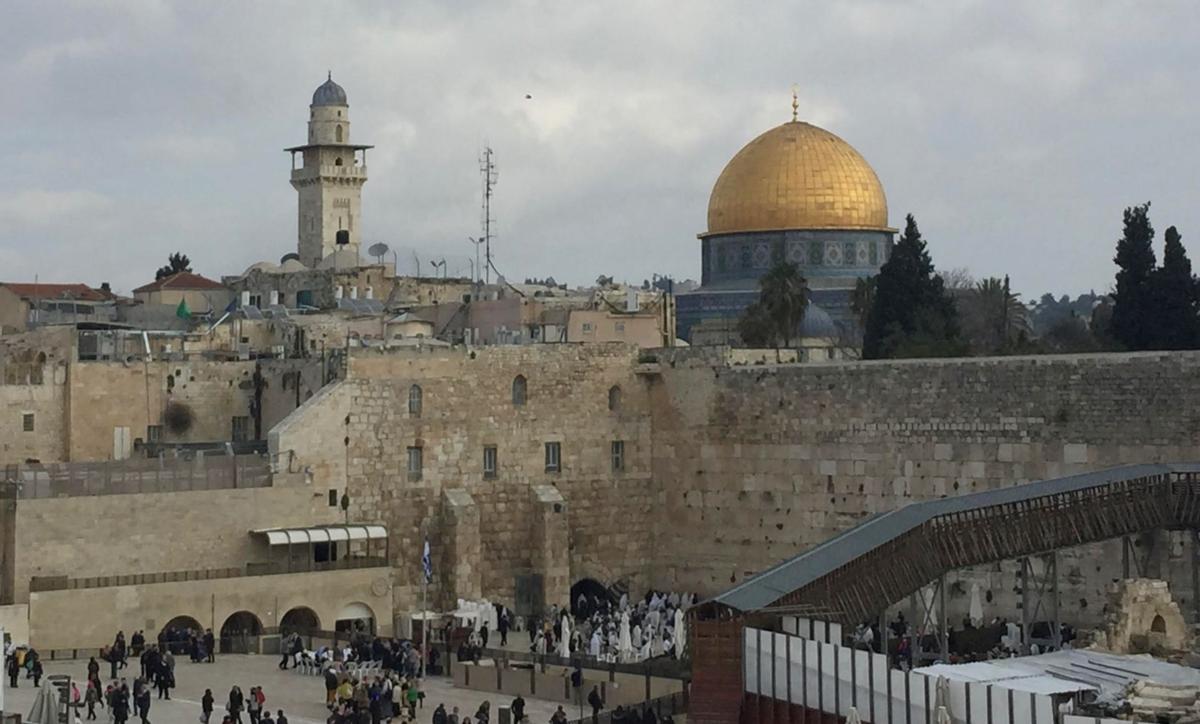 The golden Dome of the Rock is seen in the vista of the Western Wall of Old Jerusalem, where prayer notes are left in its crevices.

The star in the cave under the Church of the Nativity supposedly marks the exact spot where Jesus was born.

Serving dinner in a private home in Bethlehem, a man unveils his wife’s chickened rice upside down. She also made homemade pita and hummus.

Dale Williams rode a camel in Jerusalem and didn’t fall off.

The golden Dome of the Rock is seen in the vista of the Western Wall of Old Jerusalem, where prayer notes are left in its crevices.

I can hardly believe that this is Christmas week.

As I mused about what to write about this week, it occurred that my last column about my journey to Israel had ended as we were leaving the Dead Sea to travel to Jerusalem and thus to Bethlehem, so voilà, I had it!

The scenery remained beautiful on our bus ride to Jerusalem, seeing many shepherds guiding their herds along the way. Our wonderful Jewish guide, David Aarons, continued with us as we checked into the Olive Tree Hotel just outside the walled city of Old Jerusalem. I hope I sufficiently thanked our fabulous hosts, the Rev. Jeff and Tammy Patterson, who not only ensured that our group saw everything (walking miles daily), learned everything (notebook in hand), shopped everywhere (never enough shopping) we possibly could, but also had the most fun everywhere we possibly could (that we did). As the shopping judge, I deemed Lucille Duncan won the title of queen of shopping and John Peeler won as king. (They did it to help the economy.)

I absolutely was mesmerized by Old Jerusalem. It is the heart of the Islamic, Christian and Jewish religions. You may remember that in finding my own birth family, I discovered that my birth father was Jewish. (I have since 100% identified him and have connected with my Jewish family. What a story!)

This discovery put a new light on my trip to the Holy Land, especially when we visited the Holocaust Museum, knowing that some of my ancestors had perished at the hands of the Nazis. I previously told our guide, David, some of my personal story, and he put his arm around me and said, “Yes, if you had lived at that time in Europe, you probably would have perished, too.” A new perspective for me.

The walled city of Old Jerusalem is divided into four quarters: Jewish, Armenian, Christian, and Muslim, each with their own ambience and heritage. The stone walls themselves are magnificent. The uneven stone streets within the walled city are very narrow and filled with markets, vendors, cafes, plus temples, churches and residences for almost 40,000 people who live within those walls.

Eight gates lead into Old Jerusalem. It was inside the Lions Gate where we began to retrace the stations of the cross on the Via Dolorosa (Way of the Sorrows). All of a sudden, we heard a series of “bangs.” Being me, I thought it was missiles. It was, however, a Palestinian terrorist (Palestinian press called him a martyr) who threatened an Israeli guard with a knife. When asked to put it down, he did not. Shots rang out. The terrorist was dead at the Lions Gate. Who was right there at the Lions Gate getting into a cab? It was Emilie Rogers and Joan White with shocked guide David trying to get them out of the cab to safety while they were trying to get him to safety by getting him into the cab! In his 35 years as a tour guide, he said, this was a first terrorist attack. They were all safe as the sound of sirens filled the air.

Old Jerusalem was closed for an investigation, leaving us with a change of plans. Our unforgettable pilgrimage experiences continued as we visited where Jesus was buried at the Church of the Holy Sepulchre. It was a very sacred spot, and seeing pilgrims from all over the world, of all religions as they prayed over the tomb, brought emotional tears to many.

We also visited the Wailing Wall or Western Wall, or also known in Israel as the Weeping Wall. It is there that prayer notes are place in the crevices of the stones. As is the Jewish tradition, a barrier separates the men and women.

It was here that David had his second first-ever-in-35-years experience at the security checkpoint. One person brought a laser gun with him (I won’t mention a name). Alarm! The laser gun was brought as means to fend off possible pickpockets. David pleaded our fellow traveler’s case to the Israeli guards and won, sort of. The laser gun was returned sans laser.

As we walked the narrow streets of Old Jerusalem, I began experiencing symptoms of what would become David’s third first-ever-in-35-years experience. My mouth became an infestation of abscesses that quickly spread to my lymph nodes. So, Charles Surles (that superb dentist), assisted by Steve Felts (a dentist in Winston-Salem) and his wife, Eva Jane, a nurse, instruments were sterilized as the hotel/operating room was prepared for surgery. It was a complete success! On with the show!

Many of us had the opportunity of dining with a Christian Palestinian family living in Israeli-occupied Bethlehem. We were in small groups. I was with Mary Ann Bohi, Lucille Duncan, Phyllis Pugh, and Vivian Frazier. Ours was a very small, sparse apartment of the grandparents with religious shrines. Other family members lived in the same run-down building. None of the chairs, silverware or plates matched at the dining room table covered with a plastic tablecloth. Their adorable granddaughter danced and sang for us as the upside-down chicken (delicious) finished baking and her parents arrived. After-dinner conversation turned to Israeli politics. Even so, what a wonderful, most unforgettable experience.

Our pilgrimage led to the site of the most religious significance to Christians across the world, the birthplace of Jesus in Bethlehem. The Church of the Nativity, actually comprising three churches, was built over the cave (yes, cave, not stable) where Jesus was born. An ornate Greek Orthodox Church directly above the inn itself is awe-inspiring in its beauty and grandeur. However, it does not compare to the spiritual aura one feels upon seeing and even touching the actual spot, which is noted by a 14-point silver star on the marble floor of the grotto.

One can almost hear the words, “For unto you is born this day in the city of David a Saviour, which is Christ the Lord.

“And this shall be a sign unto you; Ye shall find the babe wrapped in swaddling clothes, lying in a manger.

“And suddenly there was with the angel a multitude of the heavenly host praising God, and saying,

“Glory to God in the highest, and on earth peace, good will toward men.”