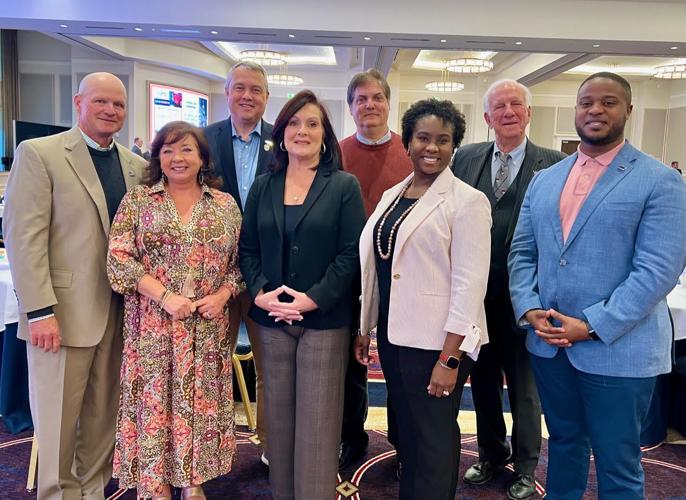 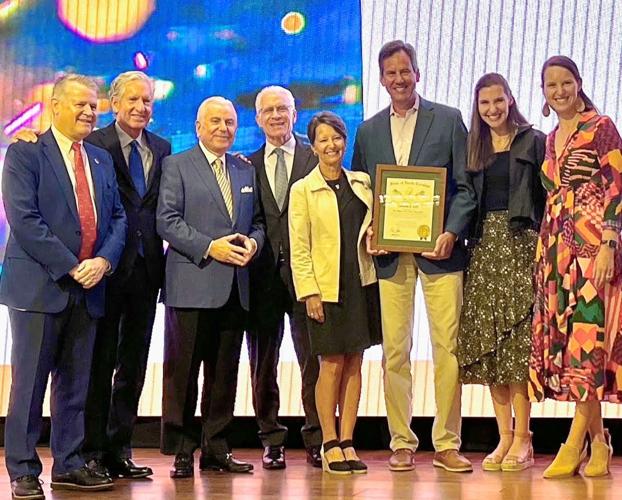 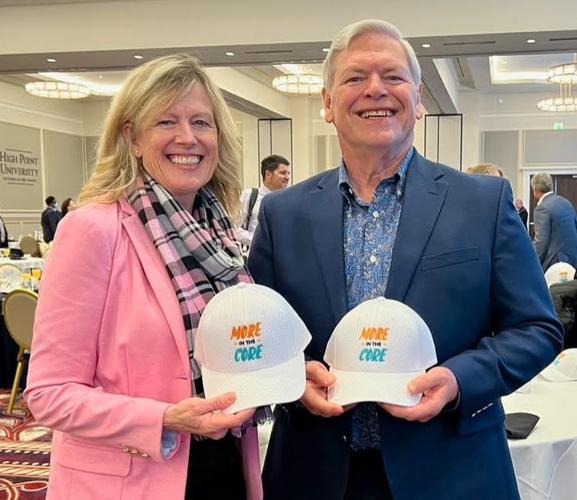 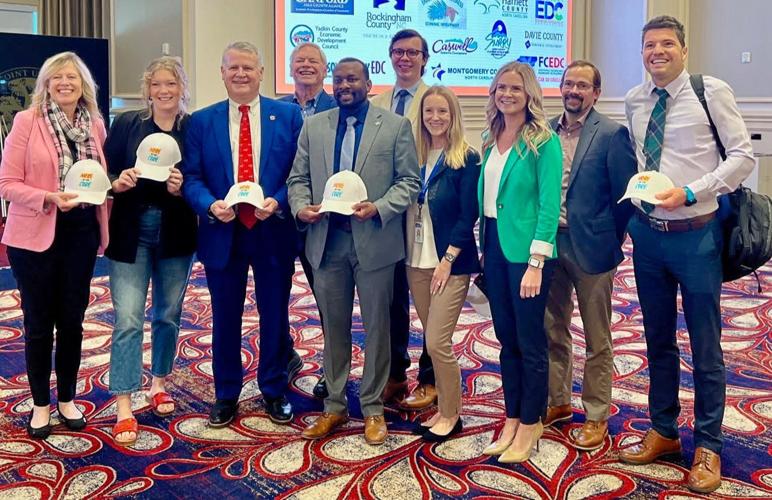 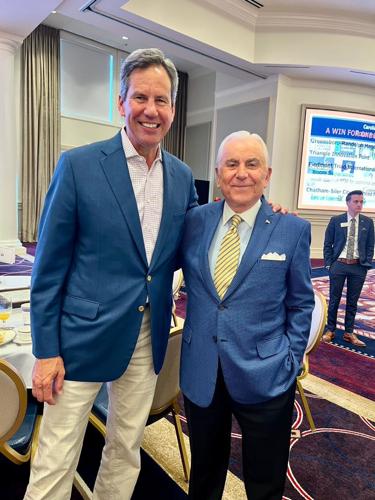 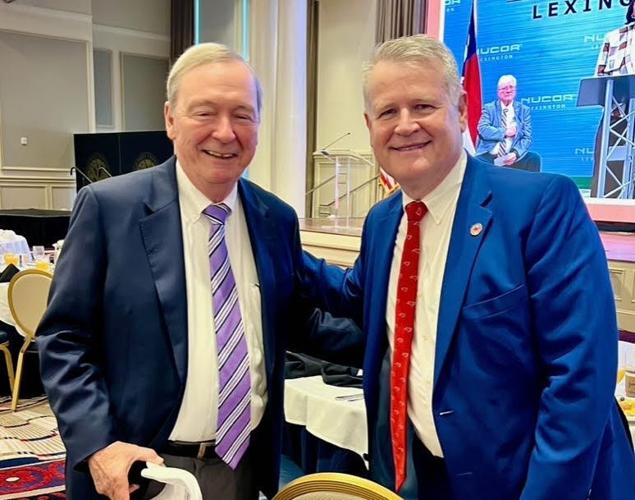 There is very good news on the economic front. Thanks to Loren Hill, Piedmont Triad Partnership’s economic development director for The Carolina Core (and former president of the High Point Economic Development Corporation), I was invited to the Piedmont Triad Partnership breakfast meeting held recently at High Point University’s Nido and Mariana Qubein Conference Center. It was truly amazing, and how wonderful to see so many leaders from around the Triad in attendance.

I always enjoy seeing Greensboro Mayor Nancy Vaughan, Skip Alston, chair of the Guilford County Board of Commissioners, and High Point May Jay Wagner, to name a few. I was particularly pleased to meet High Point’s relatively new city manager, Tasha Logan Ford. OK, I am not a political analyst, but I am a great people observer, and I really like her. Her vision for High Point? “Creating the single most livable, safe, and prosperous community in America!” That’s my kind of vision.

PTP President and CEO Stan Kelly took the podium for what he thought was the last time since it was near the end of his tenure, but a surprise would await. Kelly mentioned how in just the past 12 months, 11,000 new jobs were created in the Triad alone, “While some would say, ‘unbelievable,’ we believed. We believed in our vision. We believed we could transform this region from textiles, furniture, and tobacco to advanced manufacturing, to transportation, aerospace, distribution, logistics, and industrial. We have leaders across this region second to none. We believe we have educational assets second to none. We believe in teamwork and collaboration at the city, county, region and state levels, and they’re all represented this morning.”

Qubein spoke, as he often does, about his mother, who knew that she needed to send her son to America for his opportunity to succeed. Qubein credits his mother, who became a widow when Qubein was just 6 years old, for teaching him “everything” he knows in life even though she only had a fourth-grade education. He spoke of the “American Dream” — it is not based on how big your house is or your money but whether you have achieved your own goals. “The American dream resides within our hearts, within our souls. Each of us should thank the God almighty that we live in a country where we can speak our mind and follow our dreams. We salute the American flag here and thank God for the grace that comes our way. Now it is time to honor a man I know as a fine gentleman and a friend, Stan Kelly.”

Gov. Roy Cooper had intended to attend but a national governors’ conference in Pinehurst prevented his appearance. On the agenda was the awarding of the Order of the Long Leaf Pine to Kelly, so incoming President Mike Fox read the decree. Kelly was surprised by the award and also had been surprised to see his wife, Liz, and two daughters silently creep up to the stage. The three co-chairs — Qubein, author, motivational speaker, etc., Bobby Long, who is credited with saving the PGA Tour event now called the Wyndham Championship in Greensboro, and Don Flow, chairman and CEO of Flow Automotive — all provided Kelly accolades.

A recorded message from Cooper said in part, “The Piedmont Triad is where it is happening. What a well-deserved streak of economic wins. More people are choosing North Carolina and the Carolina Core thanks to our skilled work force, great quality of life and top-tier education institutions. Congratulations are in order, and I look forward to a whole lot more.”

After the presentation Fox spoke, calling economic development a “team sport” and saying that the area’s growth has often been referred to as a “ten-year overnight success”! The success has included the creation of 33,000 new jobs since 2018!

The work and vision continue, according to Fox: “Our regional population is approaching 2 million, and it’s growing. We have more than 100,000 students pursuing degrees at our regional colleges and universities, which is priming the talent pipeline. In this world when people can work and live anywhere, we want to make sure they know what a great place the Carolina Core is to live. We are starting a new lifestyle marketing campaign, ‘More to the Core,’ to make our region more attractive for people and companies to relocate or expand. We are focusing on what makes the Carolina Core an excellent place to live and work.”

Chris Chung, CEO of the Economic Development Partnership of North Carolina, offered PTP congratulations and said, “I want to make North Carolina the envy of the world. I want other states to cower in fear when they know they go up against North Carolina for an economic project. I want them to throw up their hands and say, ’There’s no way we can beat those guys.’ That’s the momentum you are building with Carolina Core, and that’s the momentum we must keep the foot on the pedal to keep generating. I am certain we can make North Carolina the envy of the world. It’s an honor to continue to partner with each of you every day as you continue to realize this aspiration and dream for what Carolina Core can be for North Carolina. It has been an honor to help you celebrate your successes today.”

Thank you, Loren Hill and PTP. It was an honor for me to help Carolina Core celebrate also! Remember “More to the Core,” that’s us!