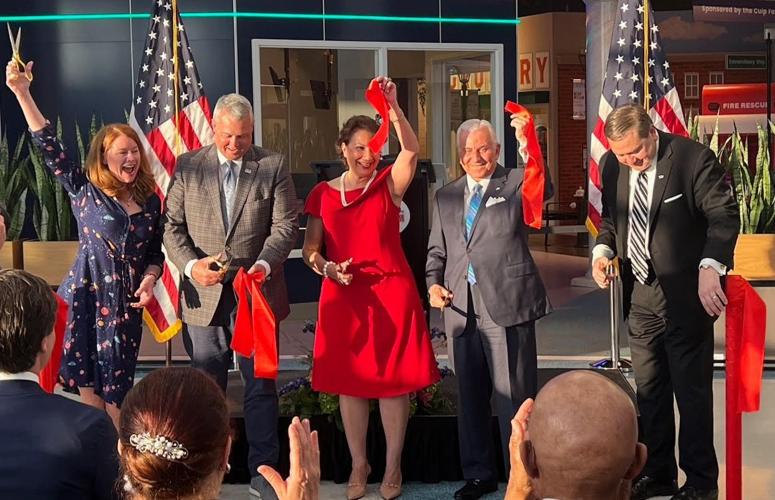 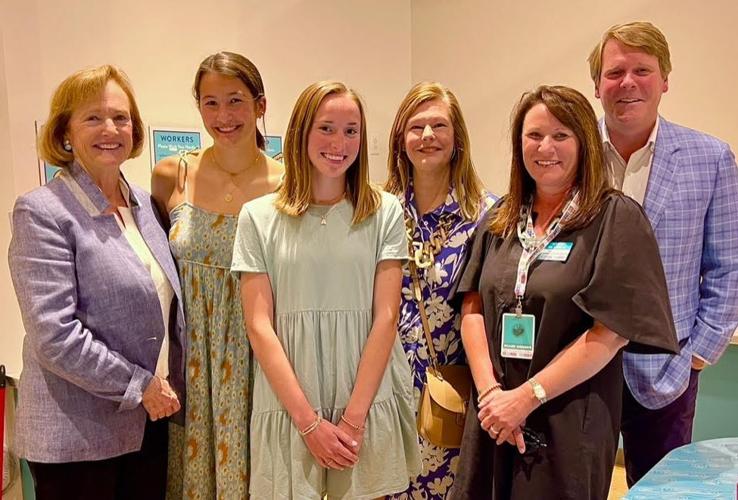 Stopping by the Kids Point Cafe, where children can pretend they work in a restaurant, were Susan Culp, Olivia Beaver, Anna Sloan Culp, Stephanie Beaver, Leslie and Iv Culp. 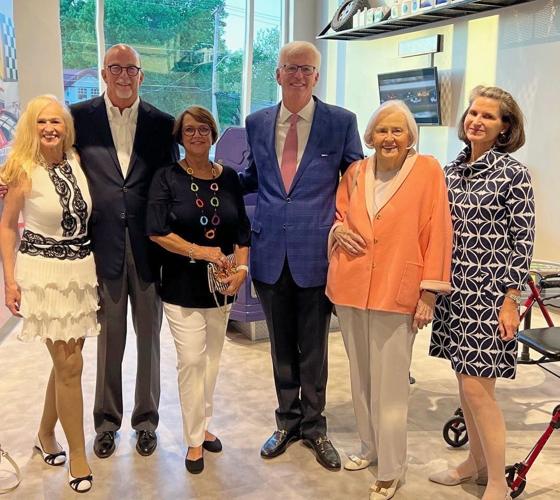 From left, Mary Bogest, Danny and Karen Davis (Davis Furniture), Greg York and his mother, Ann, and wife, Caren York, gather while exploring Kids Point, which offers a variety of play sets representing different jobs children could have when they grow up. 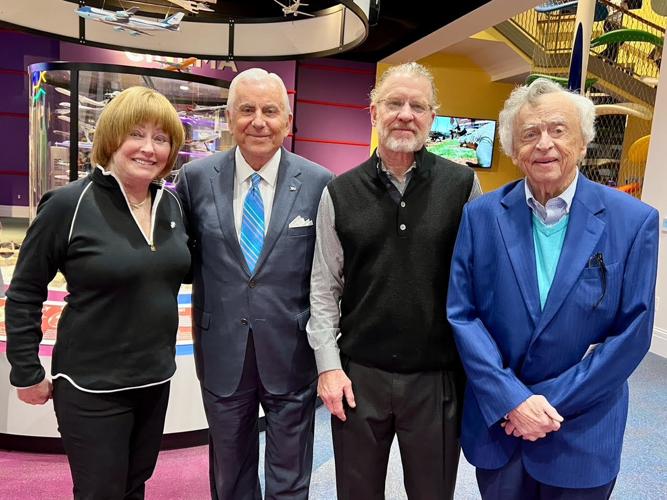 From left, Barbara Wilson gets together with Nido Qubein, David Smith (Smith and Jennings) and Fred Wilson. 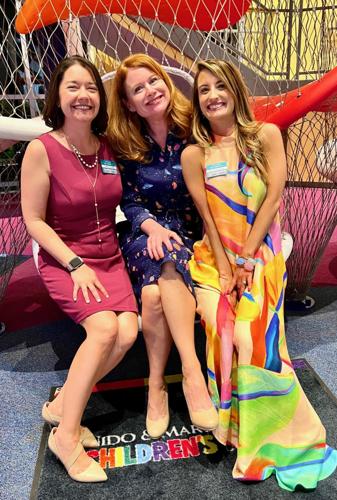 Three of the staff of the children’s museum are, from left, Director of Education and Programming Katie Nance, Director Megan Ward and Director of Marketing Olivia Pekkala. 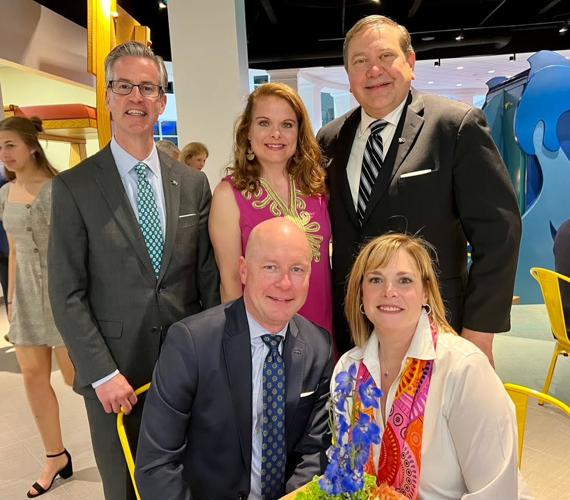 Stopping by the Kids Point Cafe, where children can pretend they work in a restaurant, were Susan Culp, Olivia Beaver, Anna Sloan Culp, Stephanie Beaver, Leslie and Iv Culp.

From left, Mary Bogest, Danny and Karen Davis (Davis Furniture), Greg York and his mother, Ann, and wife, Caren York, gather while exploring Kids Point, which offers a variety of play sets representing different jobs children could have when they grow up.

From left, Barbara Wilson gets together with Nido Qubein, David Smith (Smith and Jennings) and Fred Wilson.

Three of the staff of the children’s museum are, from left, Director of Education and Programming Katie Nance, Director Megan Ward and Director of Marketing Olivia Pekkala.

“When you wish upon a star, your dreams come true.” Walt Disney was a visionary for children with a dream called Disneyland. Visionaries dream. Dreams come true, accompanied by passion, commitment and willingness to work hard. High Point has a true visionary in our midst. It is no surprise that visionary is Nido Qubein, president of High Point University. Five years ago, the dream began with a stadium. Approached to help develop the idea of a multiuse stadium in downtown High Point, Qubein knew that a stadium alone would not be sufficient for the transformation. Qubein expanded that singular idea into a complex concept that included the Rockers baseball team, a hotel, apartments, events center, a park, a playground, business incubator, and The Nido & Mariana Qubein Children’s Museum.

This children’s museum is the “Disney World” of children’s museums. It is a space of wonder, of awe, of discovery! It teaches, inspires, entertains, encourages. To the delight of all, the museum is now open, and two days before the grand opening a reception was held for the donors.

The smile on the face of Executive Director Megan Ward showed her excitement and relief that opening weekend had finally arrived.

Guests first gathered in the gallery lobby with flutes of champagne in hand. It was wonderful to see so many benefactors, friends, and patrons. The welcoming wall bears one of Qubein’s most acclaimed quotes, “Your present circumstances don’t determine where you can go; they merely determine where you start.”

It was fun to look around to see patrons such as Teresa Caine. I visited the HPU Caine Conservatory earlier that day for Arbor Day and was totally in awe! Thanks to Teresa and her late husband Don for their generous support of HPU and our community through the children’s museum. She is a Greensboroan! It had been a while since I had seen Frosty Culp, always fun. I walked in with Pam Mercer and her husband, Greg, who led the museum design team. There were Fred and Barbara Wilson, David Couch (Palladium Center) and his wife, country music star Stephanie Quayle, who funded the double-decker carousel, three generations of the Culp family (Culp Kids Point), including Susan, Iv and Leslie with their daughter Anna, who will be attending UNC Chapel Hill in the fall. Great to see Ann York with son Greg and wife Caren, who sponsored the cinema. Three generations of Congdons also attended, including Earl and Kitty, son David and daughter Marilyn Nowell. They sponsored the Hall of Mysteries. HPU sponsored the STEAM Lab. Ronnie and Molly Young sponsored the Mars Academy. Other big sponsors were David Hayworth (the Gallery), Doug Witcher (Super U Fit Lab), and Pinnacle Bank (Outdoor Adventure Zone).

Soon there was standing room only. The Qubein family of Nido and Mariana with their children, Ramsey, Deena Qubein Samuel (I did see you, Deena) and her husband, Brad, Christina Qubein Buckfelder and husband Cole, and Michael and his wife, Morgan (Miller), sat in the front row. Museum board chair Barry Kitley, who also is the HPU senior vice president of university operations (I think Barry has been very busy), first stepped to the podium. He spoke about the history of the museum. Kitley noted that the museum consisted of 135,000 bricks, 93 windows, 760,000 pounds of steel, one carousel, and the fastest elevator in High Point! Is there anyone to challenge that?

City Councilman Chris Williams, who is the museum liaison, spoke: “I have been standing in awe in three areas over the past five years.” The first was Truist Stadium, the second was on the campus of HPU — he said, “I can’t believe this is High Point” — and on this night once again he was awed and said, “We are not the same city we were five years ago. It is because of investment, of courage, of transformational vision. I will always be in gratitude. Going into council I wanted to see High Point better. I couldn’t even imagine anything like this! What Dr. Qubein and HPU have done in this city is beyond success. It is significance. When you do something of significance, it is for someone else. The city of High Point is very grateful to you, Dr. Qubein.”

With that, Qubein stepped up and immediately heaped praise on Kitley for the tremendous time and effort he dedicated to both this project and to HPU. He also praised Ward as executive director before adding, “The person who deserves all the glory tonight is God almighty. Nothing could happen if God doesn’t bless it. It is the grace of God that allows the city to transform the way it has been transformed. In this museum it says, ‘God loves all the children of the world.’ My heart is overflowing with gratitude tonight.” The museum cost over $30 million, without a penny of debt, and Qubein thanked the million-dollar donors, including those who will remain anonymous. This also includes a large gift from the Earl and Kathryn Congdon Foundation to ensure that all children will be able to visit the museum. “Just imagine the happiness on those children’s faces when they come to this museum,” Qubein said.

The ribbon was cut. The museum was open to explore, to learn, to play. Nido Qubein’s dream came true. So did High Point’s!