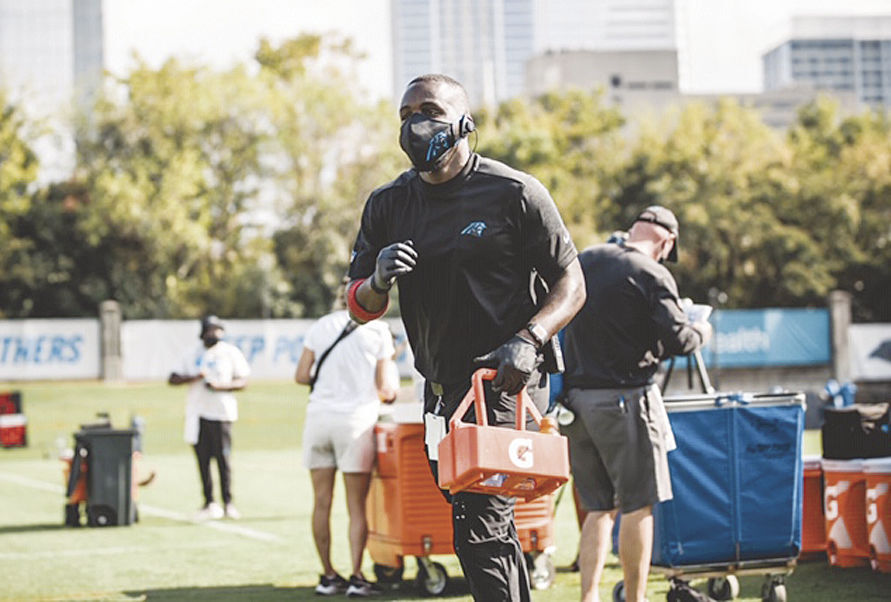 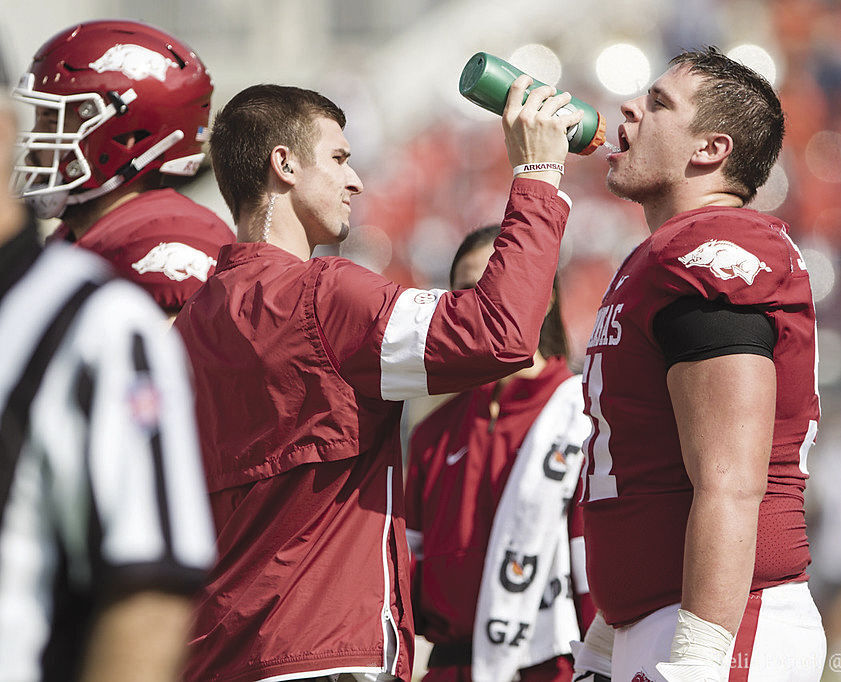 Before beginning his current internship with the Houston Texans, Connor Whicker worked with the football program at the University of Arkansas. He’s pictured here giving one of the Razorback players water during a game. 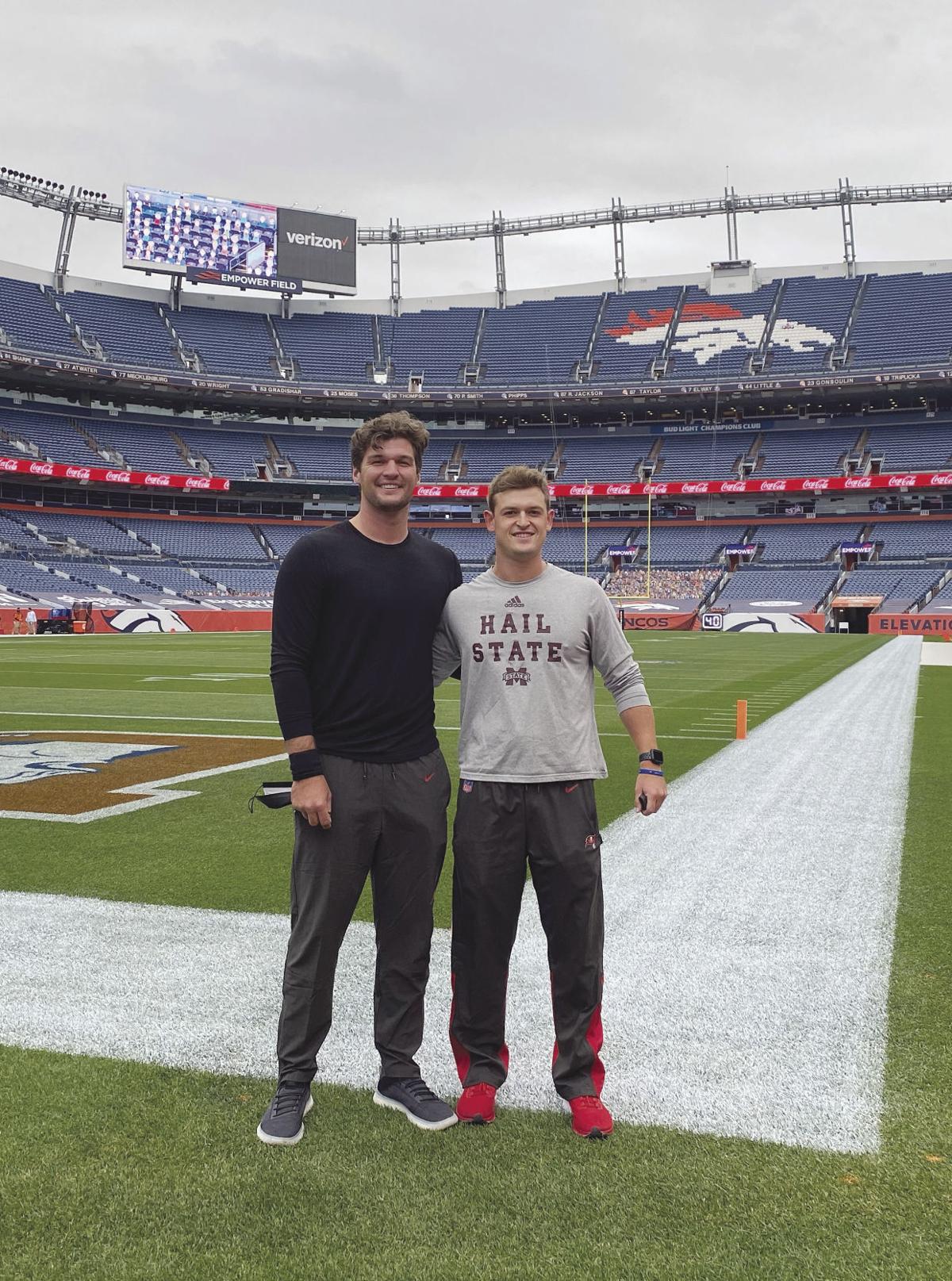 Nick Saul, left, an intern athletic trainer with the Tampa Bay Buccaneers, poses before the Bucs game against the Denver Broncos in Denver earlier this season.

Before beginning his current internship with the Houston Texans, Connor Whicker worked with the football program at the University of Arkansas. He’s pictured here giving one of the Razorback players water during a game.

Nick Saul, left, an intern athletic trainer with the Tampa Bay Buccaneers, poses before the Bucs game against the Denver Broncos in Denver earlier this season.

Don’t bother asking Dano Norceide when injured star running back Christian McCaffrey will return to the Carolina Panthers lineup. Norceide might know, but he’s not telling.

“I can’t say anything about that,” he says with a chuckle. “That’s part of my job is being mature and accountable. You can’t just run to your friends and blab what you know.”

Or to a newspaper reporter, for that matter.

But if you want to know what it’s like to be an athletic trainer in the National Football League — to learn the ropes while assisting a team of professional athletes — Norceide is more than happy to talk about it.

“It’s amazing,” he says. “I’m living the dream every single day, and each day gets better and better. It’s long hours, but when you’re doing something you love, you don’t even realize how long the hours are, because the time goes by so fast.”

Norceide, a second-year master’s degree student in the athletic training program at High Point University, is one of three individuals to go through the HPU program and land a position with an NFL team. In mid-July, he began a season-long clinical rotation with the Panthers, assisting the team’s full-time athletic training staff.

Two graduates of the athletic training program — Connor Whicker and Nick Saul — are participating in season-long internships with the Houston Texans and the Tampa Bay Buccaneers, respectively.

For all three young men, working in the NFL has been a highlight in what they hope will be long, fulfilling careers working as athletic trainers. Here are their stories:

A 28-year-old native of Spring Valley, New York, Norceide was an athlete and a self-described “sports junkie” growing up, which steered him toward the sports medicine field.

“I wanted a career where I could do something that didn’t feel like a job,” he says.

After initially pursuing physical therapy and getting his doctorate from New York University, Norceide decided athletic training in a team setting — particularly with a team at the professional or Division I college level — might be a better fit for him. He interviewed at HPU and met the faculty, and the decision to come here was a no-brainer, he says.

Since enrolling in the program, Norceide had done athletic training rotations at East Forsyth High School and Wake Forest University before landing his gig with the Panthers. He says he likes the idea of helping athletes recover from what sometimes can be career-threatening injuries.

“I feel like when an athlete has an injury, it’s the most crucial point in their career, because they’re wondering if they’ll ever be able to come back and play again,” he says.

With the Panthers, Norceide’s job is basically to support the full-time staff in whatever way they need him, whether it’s checking inventory, making sure players stay hydrated during practice, or assisting an injured athlete.

“You wear multiple hats throughout the week,” he says. “One day you might be supplying water, and the next day you’re escorting a player to get an MRI.”

Norceide has a lot of interaction with the players, whether he’s working directly with them or not, but he has learned not to be intimidated by their fame.

“After you realize they’re professional athletes, you remember they’re regular human beings, too,” he says. “Sometimes you catch yourself thinking, ‘Oh, wow, I’m in the same building with Luke Kuechly (a former Panthers linebacker and current team scout),’ but you’ve got to keep it cool and act like you belong.”

And at some point in the near future, Norceide hopes he will belong.

“I’ve seen the demands of the job, and I see what I have to improve on,” he says. “It’s just confirmed 100% that this is where I want to be and what I want to be doing.”

“From then on, I knew that’s what I wanted to major in,” he says. “I started looking for schools that had what I wanted, and I fell in love with the program at High Point.”

Whicker graduated from HPU’s athletic training program in 2018, when it was still an undergraduate program. Having played sports growing up, he connects emotionally with athletes when they are injured.

“The rewarding factor for me is seeing them at the lowest moment of their career and then getting them back to the status they want to compete at,” Whicker says. “We go through that whole process with them, and we get to know them on a personal level.”

While a student at HPU, Whicker landed internships with the Carolina Panthers and the Miami Dolphins, and after graduating he spent two seasons as a graduate assistant working with the football team at the University of Arkansas. In May, he joined the Houston Texans as an athletic training intern, a two-year position.

“My daily job responsibilities are to assist the sports medicine department in the prevention, evaluation and rehabilitation of injuries,” Whicker says. “In addition, I am in charge of maintaining the daily operations of the athletic training room and preparing the field for practices and games.”

Whicker hopes his experience with the Texans, as well as his internships with the Panthers and Dolphins, will help him get his foot in the door for a full-time athletic training job in the NFL.

“You can get a full-time job without doing this, but 99.9% of the time, the person has done this internship,” he says. “It gives you a two-year glimpse of what life would be like if you worked in the NFL. You’re working with some of the best athletes in the world, providing care and helping them maintain their bodies. That’s been pretty thrilling to me.”

An Illinois native, 25-year-old Nick Saul is a 2019 graduate of the master’s degree athletic training program at HPU. Like Norceide and Whicker, his interest and participation in sports steered him toward athletic training.

“I played Division III football in college,” he explains. “I got to work one off-season with the athletic trainers there, and it led me on the path to where I’m at now. I’ve played sports all my life, and seeing their relationships with the athletes, I just thought it would be a cool way to give something back and help other athletes out through some tough times.”

After graduating from HPU, Saul completed a one-year internship working with the football program at the University of Louisville. Then he landed his current position as a seasonal assistant athletic trainer for the Tampa Bay Buccaneers.

“My main role isn’t running out on the field when a player gets hurt,” Saul says. “I’m mainly responsible for helping out with rehab. I do some evaluations, and I do a lot of hydration set-up and things like that. I help prepare for games, clean up — whatever the staff needs me to do.”

Saul enjoys the relationships he’s been able to form with the players.

“Day in and day out, you’re right there with them, rehabilitating them back from injuries,” he says. “It’s one-on-one lots of times, so you get to create some pretty cool relationships. They’re awesome dudes.”

Saul hopes his experience with the Bucs will be a career stepping stone for him.

“I definitely want to be an athletic trainer in a professional team setting,” he says. “I know that could be a long road, but I feel like I’m getting my foot in the door with the NFL, that’s for sure.”