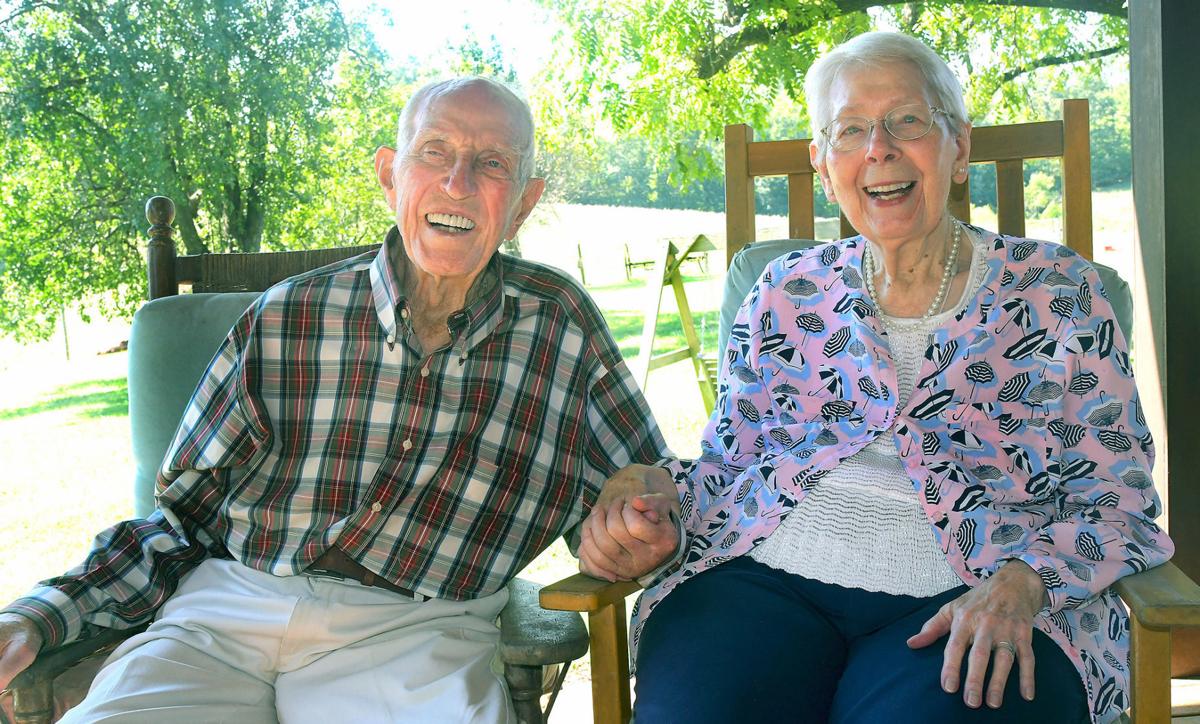 Gene and Eldora Terrell, 94 and 91, respectively, hold hands as they sit together on the front porch of their farmhouse in Trinity. The Terrells celebrated their 70th wedding anniversary this past week. 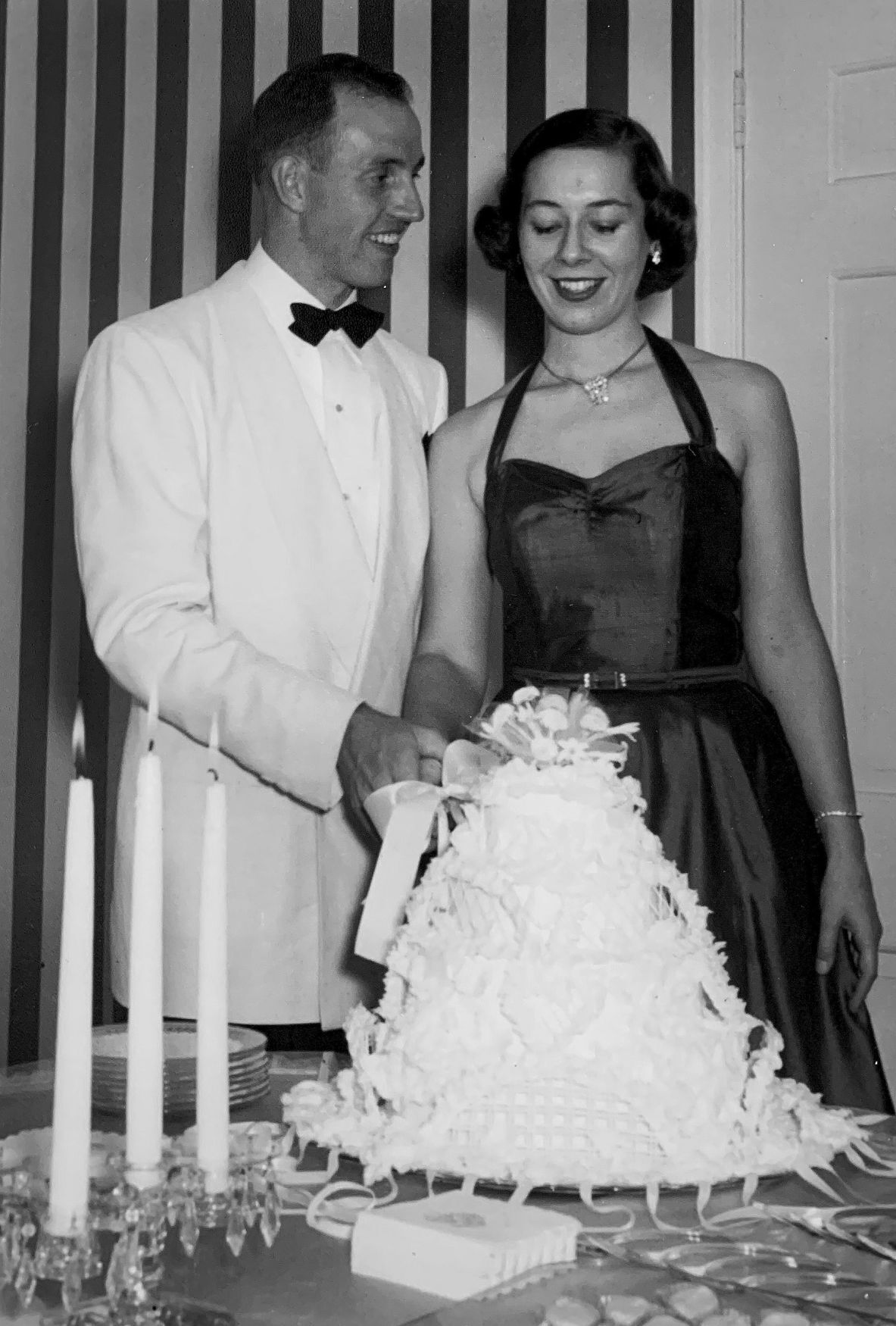 Gene and Eldora Terrell cut the cake at their wedding, which took place on Sept. 8, 1951, at Springfield Friends Meeting. Gene says he never actually proposed to Eldora; the young couple just began having conversations about “when we get married.” 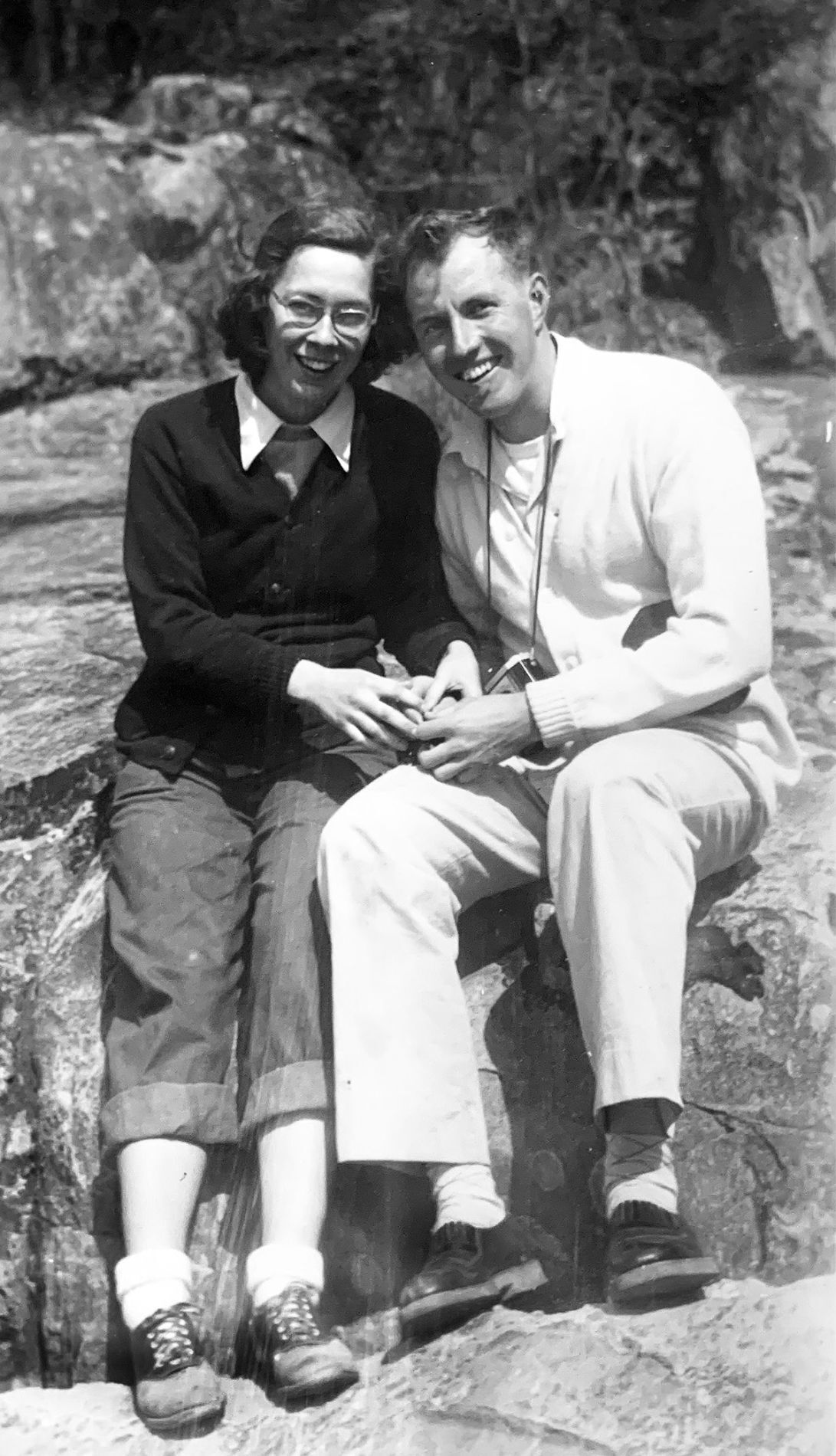 Gene Terrell and his future wife, Eldora, pose for a photo during their courting days. The young couple met in 1945 at Guilford College, when he was 18 and she was 15.

Gene and Eldora Terrell, 94 and 91, respectively, hold hands as they sit together on the front porch of their farmhouse in Trinity. The Terrells celebrated their 70th wedding anniversary this past week.

Gene and Eldora Terrell cut the cake at their wedding, which took place on Sept. 8, 1951, at Springfield Friends Meeting. Gene says he never actually proposed to Eldora; the young couple just began having conversations about “when we get married.”

Gene Terrell and his future wife, Eldora, pose for a photo during their courting days. The young couple met in 1945 at Guilford College, when he was 18 and she was 15.

TRINITY — For Gene and Eldora Terrell, seven decades of matrimony began, quite literally, with a small spark in a chemistry lab at Guilford College.

“She caught on fire, and I helped put it out,” Gene recalls matter-of-factly, and the two former lab partners — now husband and wife for 70 years and counting — laugh at the memory.

According to Eldora, she was trying to dissolve some sodium hydroxide in a test tube of alcohol and it “flamed up,” she says. Gene quickly got her to a sink and doused her arms with water. The incident left a few second-degree burns on her arms, but it also helped light a fire in her heart. The couple began dating not long after that, and they eventually got married.

They observed their 70th wedding anniversary Wednesday. The celebration will continue this afternoon, when family and friends will honor the couple with a reception at their church, Springfield Friends Meeting.

“I just saw where somebody was celebrating their 75th anniversary,” Eldora says, “and I thought, ‘Well, ours is nothing compared to that.’ They must’ve been a child bride and groom.”

Frankly, the Terrells weren’t much older than that when they met at Guilford College in the fall of 1945 — he was 18, and she was 15. So even though they’ve been married for 70 years, they’ve actually been together as a couple for 76 years. Gene is 94 now, just a few weeks shy of 95, and Eldora is 91, turning 92 in less than a month.

While the Terrells have been well-known in the greater High Point area for their medical careers as doctors — both practiced in High Point for more than 40 years — and for their community involvement, less is known about their personal lives, but they have quite a love story to tell.

While the two pre-med students got to know each other in biology and chemistry labs, bonding over turtle dissections and flaming test tubes, their first official date was a freshman class picnic that fall at Guilford Battleground Park in Greensboro.

“She let me hold her hand that first day,” Gene remembers, “but I couldn’t kiss her goodnight till after three dates.”

Gene also had to win over Eldora’s mother, which apparently was no easy task. According to family lore, whenever Eldora or her sister brought a boy home, their mother found a chore for the young man to do, to see if he was afraid of a little hard work. Gene’s task? Bring a wheelbarrow full of horse manure up to the garden and spread it to help the vegetables grow.

Eager to make a lasting impression, Gene hitched a wagon to a horse and brought an entire wagonload of manure.

“They accepted me after that,” he says with a chuckle. “I passed the test.”

Gene and Eldora dated throughout college, even writing their senior thesis together, a critical analysis of the efficacy of old-fashioned home remedies. After graduating in 1949, they learned the art of compromise when it came time for medical school. Gene got accepted to North Carolina and Eldora got accepted to Wake Forest, but they both got accepted to Duke. So guess where they went?

It was at Duke that their wedding plans crystallized.

“I never proposed to her,” Gene says. “We just started talking about ‘when we get married.’ ”

They tied the knot at Springfield Friends Meeting — Eldora’s home church in High Point — on Sept. 8, 1951, just as their third year of med school was beginning. School officials wanted them to live in separate intern rooms at Duke, even though they were married, but they got an apartment instead.

After graduating from Duke in 1955, Gene was drafted into the Army, which had a shortage of medical doctors. He served two years at Fort Bliss in El Paso, Texas — during which time he and Eldora had the first two of their six children — and then the young family moved back to North Carolina and settled in High Point.

In 1957, the Terrells opened a joint medical practice in the new High Point Medical Center on Quaker Lane. Those early years were tough, though, trying to raise several small children at home while still putting long hours into their growing practice. Sometimes Gene worked 80-hour weeks, taking his nighttime emergency calls and his wife’s so she could stay home with the kids.

Meanwhile, they were making names for themselves in the community. Gene served as the city’s first official medical examiner for some two decades, was chief of staff at the hospital and was a founding physician of Cornerstone Healthcare. Eldora was active at her church, served as a longtime trustee at Guilford College, and was medical director of Guilford County Outpatient Clinic for indigent adults for more than 25 years.

“I think all of us would say they were active in a hundred things at one time, but we never felt left out,” says Tom Terrell, one of the couple’s sons. “There was always a lot of chaos going on with six kids, but we didn’t fight with each other. And the real story is how our parents never squabbled — there was never a cross word between them.”

As bodacious as that sounds, Gene and Eldora confirm their son’s claim. And if you ask Gene the secret to staying married for 70 years, that’s exactly what he’ll tell you: “We always agree on everything we do. I don’t think we’ve ever had an argument.”

Just as compelling is the fact that they owe it all to a small fire in a college chemistry lab.

And then to survive 70 years of marriage without an argument? Let’s face it — that’s pretty good chemistry.