Tenicka Shannon, mother of Fred Cox Jr., speaks at a news conference Wednesday after learning the detective who shot and killed her son last November will not be charged.

The Rev. Greg Drumwright, a civil rights advocate supporting the family of Fred Cox Jr., announces Wednesday that the family will file a civil lawsuit in Cox’s death.

HIGH POINT — The Davidson County detective who gunned down a Black teenager from High Point at a funeral seven months ago will not face criminal charges.

Guilford County District Attorney Avery Crump announced the grand jury’s decision Wednesday after meeting with members of Cox’s family for about an hour. The decision prompted anger and disappointment from the family and their supporters.

At an emotional news conference later in the afternoon — held across the street from the church where Cox was killed — the family announced a civil wrongful death suit would be filed in Cox’s death.

“But what does that mean?” Shannon asked. “My baby’s still dead, and (Hill) is still on the police force.”

Surrounded by other family members holding signs of protest, Shannon lashed out angrily at the detective who killed her son.

Shannon called the grand jury’s decision “a punch in my gut” and “a slap in my face.”

The Cox family’s lead attorney, nationally renowned civil rights lawyer Ben Crump, was not at the news conference, but he released a statement expressing his frustration that Hill would not be charged.

“This shameful lack of accountability is something we see all too often when young Black men are unjustifiably gunned down by officers,” he said. “...Law enforcement cannot continue to fire their weapons at Black people blindly and without consequence.”

The shooting took place at the funeral service of Jonas Tramone Thompson Jr., a childhood friend of Cox’s who was slain two weeks earlier in Davidson County. Hill was investigating that homicide and attended the funeral at the request of Thompson’s family, according to the district attorney’s announcement.

According to witnesses, as mourners were leaving the church, gunfire from two passing vehicles rained down near the church, causing mourners to scatter and seek shelter. Witnesses say Cox was helping a youth and his mother get into the church safely when he was shot several times by Hill.

According to an autopsy, Cox was shot four times, with at least two of those shots being fired from behind. The autopsy also found that Cox had no firearm residue on his hands, indicating he had not fired a gun during the incident. Witnesses say he didn’t have a weapon on him.

The DA’s statement said there was no evidence that Cox was in a gang or had fired a weapon, confirming what family members have been saying for months.

Cox’s family, legal team and supporters have held several news conferences and protest marches since November, asserting Cox was gunned down without cause and demanding the detective who killed him be charged.

After reviewing the investigation conducted by the State Bureau of Investigation, Crump’s office could have filed charges against Hill, declined to file charges, or turned the case over to the grand jury, which is what the district attorney decided.

According to the statement, the grand jury heard the case Tuesday and was given two possible charges against Hill: voluntary manslaughter, and felony assault with a deadly weapon inflicting serious injury. At least 12 of the 18 grand jury members would’ve needed to find probable cause to support a charge, but they did not, the announcement stated.

“After hearing witness interviews and viewing the evidence investigated in this case, the Grand Jury returned two no true bills of indictment, finding insufficient evidence to support criminal charges,” the announcement said.

The identification of Hill in the statement marked the first time he has been publicly identified. According to the statement, Hill had notified his supervisors and the High Point Police Department that he would be attending the funeral at the family’s request.

In a telephone interview, Simmons told The High Point Enterprise he didn’t feel the lack of an indictment vindicated his department.

“There’s no vindication when there’s a loss of life,” he said. “There’s no good outcome on something like this. I’m sad there is a life lost — that’s always tragic.”

The Rev. Greg Drumwright, a civil rights advocate who has supported the Cox family, said the district attorney’s statement Wednesday does not signal the end of the case.

“After law enforcement’s investigation, and the secret convening of a grand jury, Fred’s family still has no explanation as to why he died,” Drumwright said.

Enterprise reporter Paul B. Johnson contributed to this story.

A hiring sign is displayed outside the KFC restaurant on N. Main Street on Wednesday. North Carolina’s April 2021 unemployment rate decreased 8.5 percentage points from a year ago.

HIGH POINT — What an economic difference a year can make.

The latest local job market report released Wednesday shows the dramatic recovery in employment since the coronavirus pandemic put a stranglehold on the economy entering the spring of last year.

The city of High Point unemployment rate edged down from 5.9% in March to 5.7% in April. This April’s unemployment level contrasts with April 2020, when the city jobless rate skyrocketed to 16.8% in the immediate aftermath of pandemic-related shutdowns.

The situation with the vastly improving local job market is reflected across the state. Unemployment rates decreased in 91 of North Carolina’s counties from March to April, increased in seven and remained unchanged in two, according to the monthly report from the state Department of Commerce.

That means in a year’s time local and statewide jobless rates have gone from high marks exceeding the unemployment hardship of the Great Recession to levels now approaching a healthy job market. Historically, an unemployment rate at or below 5% has been considered a robust employment market.

The N.C. Department of Commerce reports that the number of North Carolinians in the workforce has grown noticeably in the past year. Since April 2020, the number of workers employed statewide has increased 710,828, while the number of people unemployed decreased 395,936.

One cautionary note for the local economy involves the manufacturing sector.

The upcoming May and June local unemployment reports should provide insight into how the pullback of mask restrictions and other COVID-19 emergency orders help the job market, especially in the restaurant and hospitality fields, McCully said.

Davis Furniture has opened its new corporate headquarters on its south High Point campus. The 50,000-square-foot building will house office and design staff, as well as manufacturing for the 77-year-old family-owned company.

HIGH POINT — As employees return to offices after working from home during the coronavirus pandemic, one High Point furniture maker is poised to capitalize on the trend.

Davis Furniture has just completed a new $8.5 million corporate headquarters building on its campus that will showcase the cutting-edge designs it produces for offices around the world.

It began the expansion before the pandemic and the shift toward remote work, but business is picking up now as companies redesign their workspaces to emphasize open, common areas instead of private offices.

It includes office space for the company’s corporate and executive staff, as well as an adjacent manufacturing space.

It will also function as a working showroom, hosting designers and clients.

The 77-year-old family-owned company employs 250 people and occupies nearly 400,000 square feet of office and manufacturing facilities across its 25-acre campus on College Drive.

Davis Furniture has seen double-digit growth over the last decade under the leadership of President and CEO Danny Davis.

The company hosted a ribbon cutting ceremony for the new building Wednesday that drew dignitaries including Lt. Gov. Mark Robinson, who said he worked at Davis Furniture from 2016 to 2018 after his previous employer moved its operations out of the country.

“That company was a big global company, and they decided it was time to pack up and leave,” Robinson said. “When they did, Davis Furniture was right here for a lot of the folks who left that place, and gave us a place to work, helped us earn a living right when we needed it the most. So Davis Furniture will always be part of my family and will always hold a special place in my heart.”

HIGH POINT — The “America’s Got Talent” judges were in accord about 1aChord.

The male vocal trio from the University of North Carolina at Greensboro — which includes senior jazz studies major Julian Kennedy of High Point — received a standing ovation from the four judges for a beautifully harmonized cover of the Coldplay hit “Fix You” during the show’s season premiere Tuesday night.

More importantly, 1aChord received four enthusiastic yes votes from the judges, advancing the trio to the next round.

In addition, the judges offered nothing but high praise for Kennedy and his fellow singers, Tavis Cunningham and Christoff Hairston:

Heidi Klum: “I have the feeling this is the beginning of an amazing journey for the three of you.”

Howie Mandel: “I thought you sounded like so much more than what you are — you’re like a three-man choir. Your harmonies are so powerful and so right on. I’ve never been to church, but I feel like I just went.”

Sofia Vergara: “I kept thinking if these kids are singing like this and they’ve known each other for like a month, imagine when they are really working together for a long time.”

Even Simon Cowell, the show’s most notoriously critical judge, was blown away by 1aChord.

“I kind of felt like I was walking into heaven for a moment,” Cowell said. “Everything about that audition, to me, was pretty much perfect.”

1aChord has to go through another round of competition before advancing to the live show. The show airs at 8 p.m. Tuesdays on NBC. 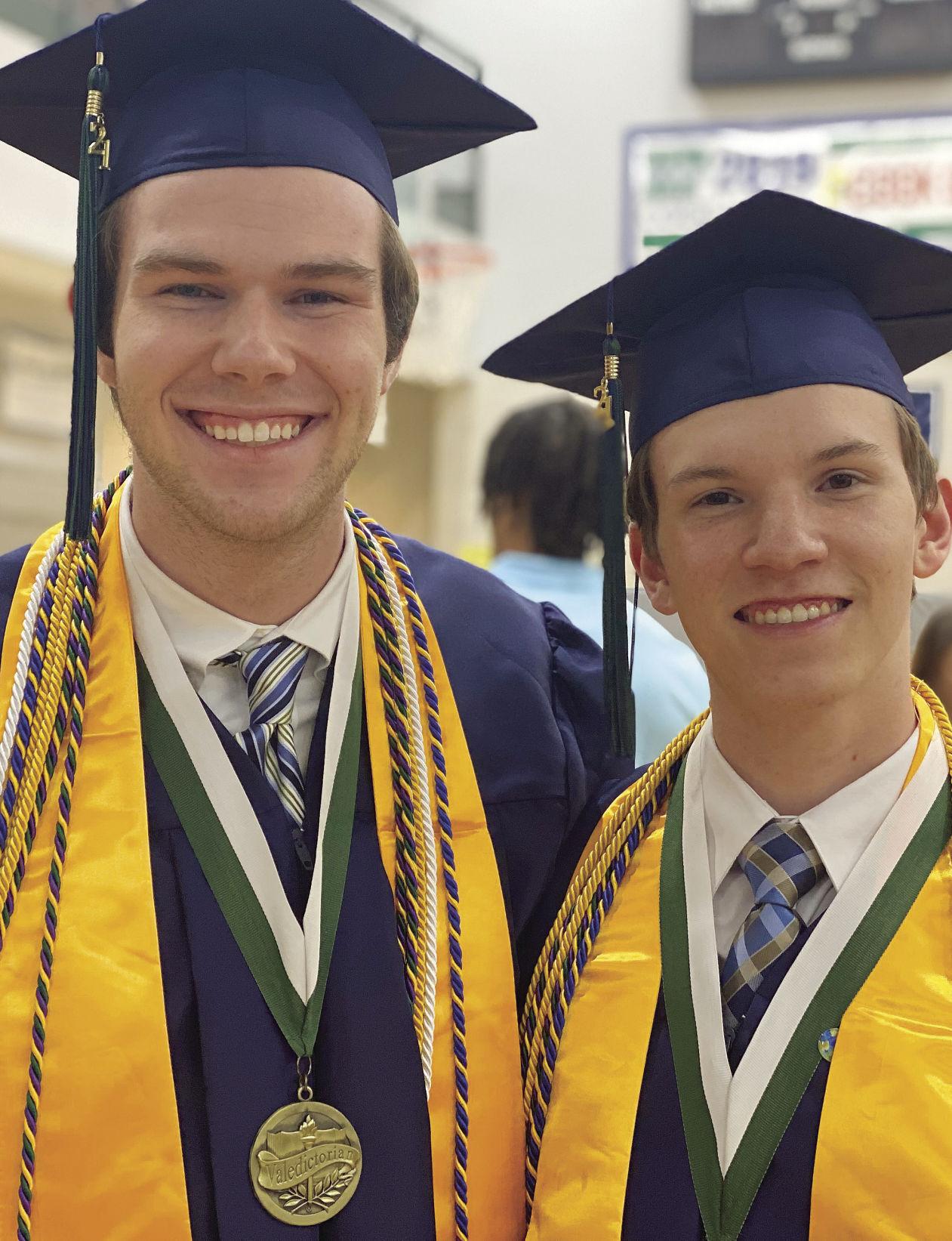