News
Some students to return this week

GUILFORD COUNTY — The youngest students in Guilford County Schools will return to classroom instruction Thursday for the first time since the onset of the coronavirus pandemic in March.

The Guilford County Board of Education, on a 5-4 vote, cleared the way for students in pre-kindergarten, kindergarten and first and second grades to return for full classroom days in all four grade levels. Third-graders through high school students would be phased into classroom instruction starting in January.

Even with the return to classroom instruction this week, the youngest students will switch back to remote learning Nov. 30-Dec. 4 for the week after Thanksgiving.

Superintendent Sharon Contreras and other staff leaders contend that the board needs to take into account research on the impact of students being out of the classroom for an extended period on their emotional well-being.

The board also was briefed on “learning loss” among students from extended periods of taking instruction remotely. Failure rates among students are at alarmingly high levels, Contreras said.

Prior to the board vote and discussion, Guilford County Public Health Director Dr. Iulia Vann briefed the board on the trends with COVID-19 infections locally. She said that cases are increasing and she’s concerned about the numbers.

Vann told the board that there have been daily spikes in cases as late as the first two days of this month. The county’s hospitals have 113 COVID-19 hospitalizations, the highest since the onset of the pandemic.

Contreras acknowledged that whether or not to return to classrooms marks a difficult choice, citing her recommendation for the move as the toughest choice in her 30-year professional education career.

Tuesday night’s meeting was the last regularly scheduled one for a pair of outgoing board members.

Democratic District 5 member Darlene Garrett will retire after 20 consecutive years on the board. The longest-serving current board member decided about a year ago not to seek another term.

Garrett will be succeeded by either Republican challenger Michelle Bardsley or unaffiliated candidate Deborah Napper, who holds a 187-vote lead in the race with nearly 36,000 votes cast. The outcome will be determined by the resolution of outstanding, still-to-be counted ballots in the election canvass Friday.

Democratic member Byron Gladden lost his District 7 seat in the party primary this past March, though he served through the end of his first term. Democrat Bettye Taylor Jenkins will take the oath of office at the Dec. 8 meeting after winning the three-candidate primary — she was unopposed in the Nov. 3 general election.

The school board could have a third new member depending on the outcome of a tight District 3 contest. First-term Republican incumbent Pat Tillman holds an 88-vote lead over Democratic challenger Blake Odum with nearly 37,000 votes cast.

HIGH POINT — Police have released more information on a shooting in which a man was killed during a memorial service at a local church on Sunday.

Fredrick Cox Jr., 18, of High Point, was killed after multiple shots were fired from two vehicles toward a crowd that had just exited Living Water Baptist Church at 1300 Brentwood St., according to a High Point Police Department press release. Police also said at least one or more people in the crowd fired guns back at the two vehicles, described as a newer-model, dark gray four-door Dodge Charger and a white four-door car.

The church was hosting the funeral service for a young man who died in October, according to the press release.

Police responded to the scene on a call of shots being fired and found Cox dead and a few others with minor injuries. Officers found 60 to 70 shell casings from various weapons including 9 mm, .40-caliber, .45-caliber and .223-caliber.

The senior pastor of Living Water, the Rev. Dayhige Wright, told The High Point Enterprise on Monday that the church volunteered its property to be used for the memorial service and that no members of Living Water were present when the shooting happened.

This memorial card from 1918, owned by Wayne Underwood of Trinity, features a photo of Sgt. William L. “Willie” Underwood, who was killed in World War I only hours before the end of the war.

Sgt. William L. “Willie” Underwood, who was killed in World War I, lies buried in High Point’s Oakwood Cemetery, along with his wife, Neta, who died six months before her husband left for the war.

American troops fight from a trench in the Meuse-Argonne Offensive of World War I, the bloody battle in which Sgt. William L. “Willie” Underwood was killed.

Today, though, more than a century after his death, we honor the memory of Willie — as most everybody knew him — for his supreme sacrifice, untimely as it may have been. You see, Underwood had the great misfortune of being killed on a World War I battlefield on Nov. 10, 1918 — only hours before the signing of the armistice that ended the war.

“The last High Pointer to sacrifice his life in the world war,” The High Point Enterprise wrote about Underwood in telling his tragic tale.

Underwood’s sad story actually began in March 1917, when his young wife, Neta, was hospitalized with appendicitis. Following surgery, she appeared to be recovering nicely, but she experienced a sudden turn for the worse and died. She was only 21, and her death must’ve come as quite a shock to her husband. They’d been married just over three years, and they had no children.

Only a week and a half later, the United States entered the “Great War” — World War I — and by early June, all men between the ages of 21 and 31 were required to register for the draft. Underwood, a few months shy of his 31st birthday, dutifully complied, meanwhile continuing his job at Tomlinson Chair until he was drafted.

In September — only six months after his wife’s death — Underwood found himself bidding his family farewell as he and 18 other young High Point men boarded a train bound for basic training at Camp Jackson, South Carolina. Underwood, likely among the oldest — if not the oldest — man in the contingent, was designated the squad’s leader.

Underwood served with the 322nd Infantry, 81st Division, aka the Wildcat Division. In the fall of 1918, the division was deployed to the battlefields of France, where the soldiers would participate in the Meuse-Argonne Offensive, a particularly bloody battle near the end of the war.

Historical accounts indicate that on Nov. 9, 1918, the Wildcat Division, facing heavy machine gun and artillery fire, captured the ruined village of Moranville. By the next day, Nov. 10, rumors had begun to swirl that an armistice was about to be signed, but with no official confirmation from their superiors, the Wildcat Division continued fighting.

That afternoon, around 4:30 p.m., Underwood was killed when a bomb exploded directly over his head, according to The Enterprise. He was 32.

The next day, Nov. 11 — the 11th hour of the 11th day of the 11th month — the armistice was indeed signed, as had been rumored. Countless High Pointers — probably even Underwood’s own family — rejoiced that peace was at hand, unaware that one of their own had been killed less than 24 hours earlier.

A week or so later, still unaware of his death, the family received a letter from Underwood stating that his unit was headed for the front, and that the family likely would not hear from him for several weeks. Soon after that, his parents finally received notice from the adjutant general that their son had been killed in action.

Underwood had written two final letters home before he was killed — one on Nov. 7 to his sister, and another on Nov. 8 to his parents. In both letters, excerpts of which were published in The Enterprise, he sounded upbeat, even telling his sister he thought he would be home soon.

Unfortunately, Underwood’s letters were apparently forwarded by the Army after they were found in the dead soldier’s pocket. The letter to his sister included a short note from Underwood’s lieutenant, telling of his death.

“Your brother was a most excellent man in every respect,” the lieutenant wrote. “We regret his loss very much. He, with many others, was buried in a beautiful valley in France, close to where he was killed, with full military honors.”

Though heartbroken, the fallen soldier’s family took pride in the sacrifice he’d made for his country. A letter to Underwood’s parents from his younger brother, T.J. Underwood — which was also published in The Enterprise — stated, “We must try to look at this as he would wish for us to. … Willie has done his bit and died a true man’s death. He could never have died any nobler than he did.”

Finally, on Sept. 17, 1921 — nearly three years after his death — Sgt. William L. “Willie” Underwood came home, his remains having been shipped from France. Funeral services for the fallen soldier, whom The Enterprise dubbed “a High Point hero,” were held the following afternoon with full military honors. More than a thousand High Pointers paid their respects, and Underwood was laid to rest at Oakwood Cemetery beside his beloved wife, Neta.

Even today, more than a century after his death, it’s hard not to feel heartbroken for Willie Underwood, a man who seemingly couldn’t catch a break. His wife died young, and so did he, only hours before the war ended.

And yet today, as we observe another Veterans Day — on the very anniversary of that 1918 armistice that Underwood never got to celebrate — we salute the fallen serviceman for the sacrifice he made, honoring him with the same hallowed words The Enterprise chose for him so long ago: 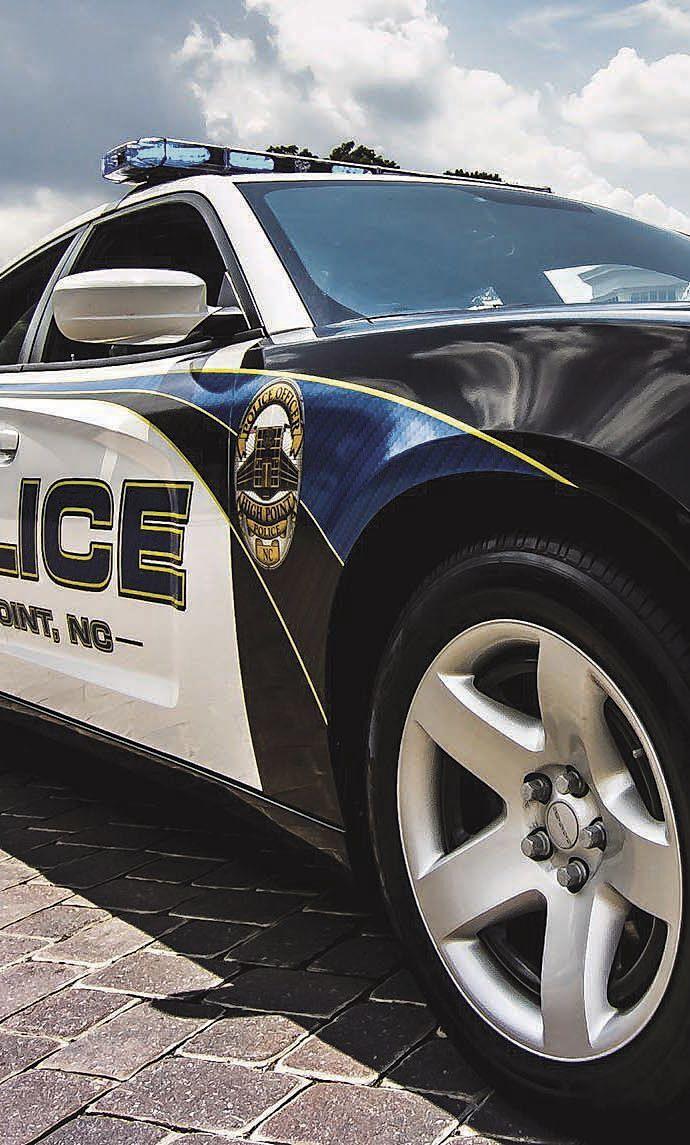