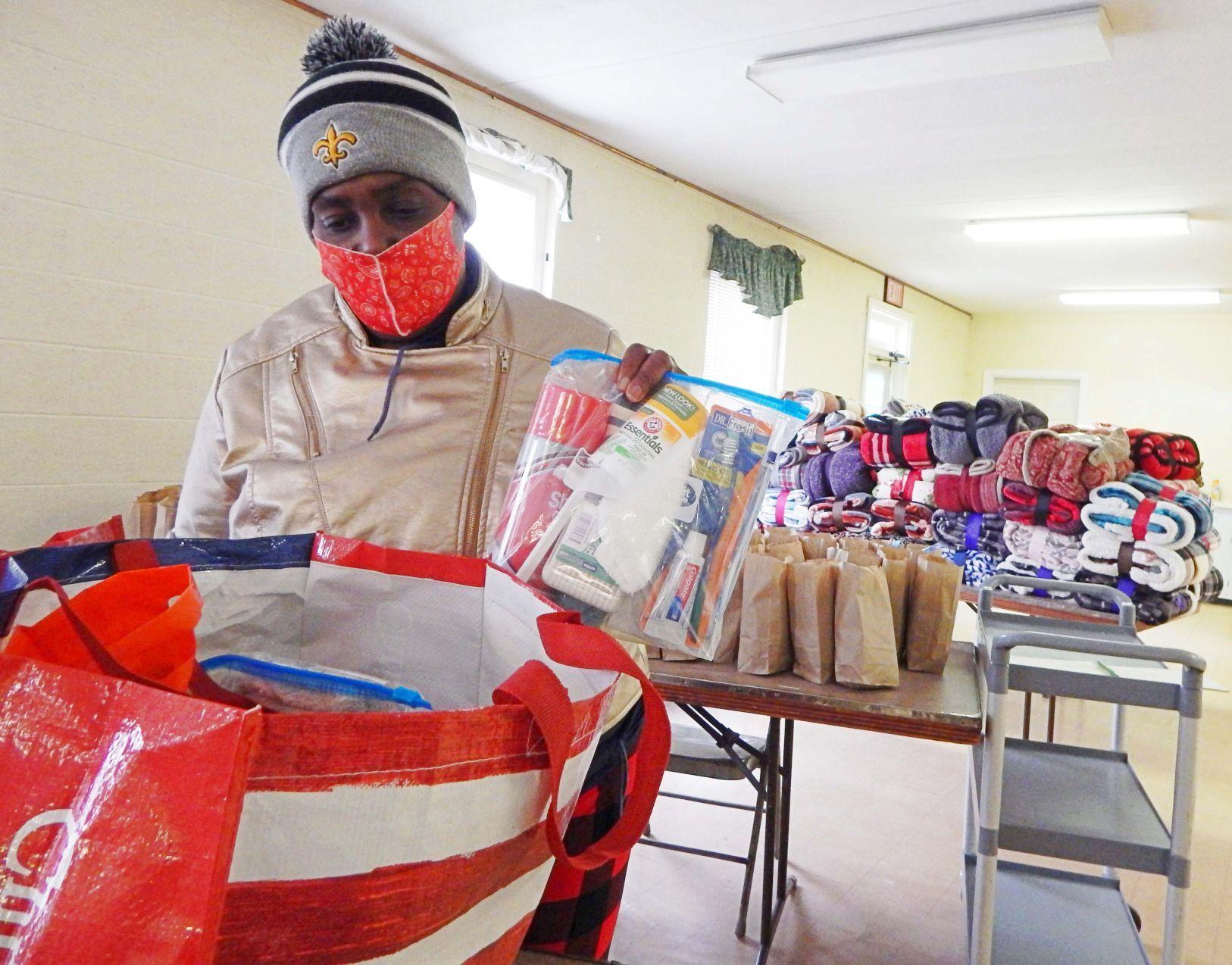 NO HOLIDAY OFF Weekly effort to help homeless doesn’t break for Christmas. A4

For High Point Ballet’s performances of “The Nutcracker” this year, dancers wore masks, socially distanced themselves onstage, and performed with no audience at the High Point Theatre. As a result, the ballet took a serious financial hit this year, as did many performing arts organizations.

Local performing arts organizations have taken it on the chin this year, thanks to a Grinch — cleverly disguised as the coronavirus — that crippled their ability to make money this holiday season.

Specifically, High Point Ballet and High Point Community Theatre lost tens of thousands of dollars — money that constitutes a significant chunk of their annual revenues — because the COVID-19 pandemic kept them from being able to perform their always-popular Christmas productions in front of live audiences this year.

“For us, ‘A Christmas Carol’ is pretty much our bread and butter — the show that we always count on to be in the black,” said Courtney Lowe, co-president of High Point Community Theatre. “We know we’re always going to make a profit on that show.”

Except for this year, of course. This year, the theater group presented a free online performance, “A Christmas Carol Celebration: An Interactive Radio Play,” rather than the traditional run of five ticketed shows at the High Point Theatre.

According to Lowe, the livestreamed performance generated only about $300 in donations, compared to the approximately $60,000 that last year’s “A Christmas Carol” made through general public ticket sales, school performance ticket sales and souvenir sales.

What that does, Lowe added, is hurt the theater group’s ability to produce other shows during the year, which typically don’t generate anywhere near the amount of revenue that “A Christmas Carol” brings in.

“On average, our production of ‘A Christmas Carol’ accounts for roughly 40% of our Main Stage ticket sale revenue,” Lowe said.

High Point Ballet was similarly impacted by having to livestream its annual performances of “The Nutcracker,” which traditionally accounts for about 35% of the ballet company’s annual revenues.

The company sold tickets for its livestreamed performances — and was even able to attract an online audience from states all over the country — but the money generated still won’t come close to what High Point Ballet normally makes from performing “The Nutcracker” for live audiences, said founder and executive director Rita Taylor.

According to Taylor, the pandemic’s impact on the arts — not just in High Point, but across the country — is unprecedented.

“I would say this is the most difficult time period we’ve ever been through,” she said. “It’s always been a struggle for the arts, but now it’s about survival. The only way the arts are going to survive is through people’s donations and sponsorships. It’s never been more important than it is right now to ensure the arts survive.”

After taking office in December 2019, the new High Point City Council set several ambitious goals for the coming year, but much of that was thwarted due to the pandemic.

HIGH POINT — Just a few months into its tenure, the new High Point City Council’s grand plans ran up against the coronavirus pandemic.

After taking office in December 2019, the council set several ambitious goals for the coming year, including:

• The recruitment of 50 new office jobs and five new investors for the catalyst project area around Truist Point stadium.

• Designing a marketing campaign focused on diverse groups, events and quality of life.

• Selecting a target neighborhood and coordinating with necessary city departments to implement a holistic strategy to address systemic problems such as violence and poverty.

None of these goals have been met, in large measure due to the pandemic, which took hold in March.

For instance, the city started its annual budget process last spring projecting a $7.2 million general fund shortfall due to the economic shutdown in the early months of the pandemic.

That put a damper on new initiatives under consideration, as the council instead had to weigh a series of budget cuts.

The pandemic also torpedoed the prospects of landing more office jobs downtown anytime soon, as companies continue to have their employees work from home.

The council did enact a new incentives policy over the summer to try to facilitate more office projects in the downtown area.

The council, which includes four Black members for the first time in the city’s history, has made initiatives involving diversity and inclusion a priority.

These include creation of a new city position for a diversity, equity and inclusion officer. The job has been budgeted and advertised, but has not been filled.

The job description states the position will be part of the Communications and Public Engagement Department and will work toward city diversity, equity and inclusion goals for hiring.

Other duties will include developing educational and training programs to facilitate diversity, inclusion and collaboration among city employees.

The council also directed the city manager to institute mandatory diversity training for all supervisory employees, policies for more robust recruitment of underrepresented candidates for job openings and contract opportunities and a leadership training program to help employees with opportunities for advancement.

The council also launched a review of the city’s Minority Women Business Enterprise purchasing policy as part of an effort to develop strategies to encourage more minority and women-owned firms to be competitive in doing business with the city.

The city has long had a goal of 10% minority participation in construction projects valued at $500,000 or more, but the actual participation rate is around 8.7%.

And there isn’t much of this work to go around because most contracts the city awards involve smaller projects, such as street and utility work, that don’t have MWBE participation goals.

The council has had several briefings from city staff on the subject, but has not taken any public votes on the matter.

One possible measure that’s been discussed is the creation of a MWBE coordinator position in the city.

Loss of revenue from the pandemic nearly forced the permanent closure of the High Point Museum in 2020.

The High Point Museum was slated for closure — eliminating 14 full-time and part-time jobs in the process — under a proposed 2020-21 budget presented to the High Point City Council in early June. The proposed cuts, which would’ve been effective June 30, were necessary to help the city overcome a $7.2 million shortfall in revenue, a shortfall that was largely due to the impact of the coronavirus pandemic, council members were told.

Interim City Manager Randy McCaslin acknowledged in his budget message to the council that closing the museum was “a difficult recommendation to make,” but attempted to justify his decision by pointing out that the city-owned-and-operated facility is not widely used by the public.

Mayor Jay Wagner concurred in a Facebook post, stating that closing the museum would save the city about $750,000, a huge savings considering only about 35 people a day visit the museum.

“It’s hard to justify the expense for the number of people served,” Wagner wrote.

“This is just devastating to me and to everybody else that’s been involved for so many years, that they could even think of such a thing, because you start eliminating your cultural institutions and you undermine civilization,” said Anne Andrews, who’s been involved with the organization since the mid-1960s. “It’s just wrong, is all there is to it.”

“They cannot do this — we can’t let that happen,” she told The High Point Enterprise. “That is a cultural institution. That is where people can go to see and learn High Point’s history, black and white. It needs to stay open. I’m pretty sure they can find money somewhere else — find another area to take the money from.”

Ultimately, city leaders heard the community’s concerns and responded to them. The council adopted a budget that would eliminate 10 part-time positions and one full-time position at the museum — and reduce the facility’s hours of operation — but the museum was able to remain open.

“Hopefully by next year,” Director Edith Brady said, “things will be a little better, and the city might be able to put those positions back in the budget.”