A photograph shows former High Point Police Officer Laura Steele, left, and Graydon Young in a surveillance video from the Washington Metro Area Transit Authority leading up to the Jan. 6 insurrection at the Capitol.

HIGH POINT — A Thomasville woman charged with being part of a self-styled militia that organized members to storm the Capitol Jan. 6 is a former High Point Police Department officer.

Laura Steele, 52, and five other individuals who authorities say are associated with a group called the Oath Keepers, which includes many former military and law enforcement members, were arrested and charged last week for their roles in the insurrection. Among the others charged is Steele’s brother, Graydon Young, 54, of Florida, who encouraged her to join Oath Keepers in the days before going to Washington, according to the indictment.

Although a total of only nine Oath Keepers have been charged so far, the indictment indicates that more than 40 came to Washington just on one bus from North Carolina.

The 21-page federal court indictment says that members of the Oath Keepers organized to go to Washington with weapons and participated in the storming of the Capitol last month to try to prevent Congress from certifying the Electoral College vote that made Joe Biden president over former President Donald Trump.

The indictment says that one member of the group, Jessica Watkins, 38, of Ohio, told an Oath Keepers recruit in November that if Biden became president, “our way of life as we know it is over. Our Republic would be over. Then it is our duty as Americans to fight, kill and die for our rights.”

On Jan. 6 Steele and the others “prepared themselves for battle before heading to the Capitol by equipping themselves with communication devices and donning reinforced vests, helmets, and goggles,” the indictment said.

The indictment says the group stormed up the east side of the Capitol and entered the building and eventually ended up in the Capitol Rotunda.

While they were in the Rotunda, someone told Watkins via an app that turns a cellphone into a walkie talkie, “You are executing citizen’s arrest. Arrest this assembly, we have probable cause for acts of treason, election fraud.”

When she worked with the High Point Police Department, Steele served mainly as a school resource officer 20 years ago.

She was involved in two pepper spray incidents with students arrested on a disorderly conduct charge in February 2001, one with a 16-year-old student at Southwest Guilford High School and another with an 11-year-old student at Southwest Guilford Middle School. A police investigation cleared Steele in both incidents, The Enterprise reported at the time.

Steele received praise from the police and community for her role in a campaign to deter drunken driving by students, including holding large outdoor student assemblies with mock accident scenes to dramatize the dangers of driving while intoxicated or impaired.

The Oath Keepers are a large but loosely organized collection of individuals, some of whom are associated with militias, according to the indictment.

“Some members of the Oath Keepers believe that the federal government has been co-opted by a cabal of elites actively trying to strip American citizens of their rights. Though the Oath Keepers will accept anyone as members, they explicitly focus on recruiting current and former military, law enforcement and first-responder personnel,” it says.

The indictment accuses Steele and the other Oath Keepers of attending or scheduling training events to teach and learn paramilitary combat tactics for the Jan. 6 assault on the Capitol.

The indictment says that Steele on Jan. 3 emailed the Florida chapter of the Oath Keepers with a membership application with the intent of taking part in events at the Capitol Jan. 6. Steele left for Washington, D.C., on Jan. 5.

HIGH POINT — The impact of the coronavirus pandemic is not the only challenge facing their downtown redevelopment efforts, city leaders say.

When crowds are able to return to Truist Point stadium and other sites, public and private-sector leaders say new strategies are needed to deal with a host of issues related to safety.

“We’re going to have to develop a strategy for how to deal with homelessness in the downtown, how to deal with folks who maybe are making people uncomfortable,” Mayor Jay Wagner said. “I’ll tell you, bottom line, I feel like the downtown is safe. There’s certainly a perception we’re fighting, but the statistics don’t really bear that out, in terms of actual violent crimes in the downtown.”

Dr. Lenny Peters, CEO of Peters Development, a High Point company with about $100 million of current and planned projects downtown, said homelessness and panhandling is only one issue that needs to be addressed.

“We don’t have a cohesive parking plan, so I think the mayor and the city are working extremely hard to find a solution for that,” he said.

One option could be for the city or Forward High Point, the downtown development agency, to hire a private security force to patrol downtown. This could be part of a broader approach that could also enlist social service agencies to help address the mental health issues at the root of homelessness and crime, Peters said. “We’ve got to have a cohesive plan. I think that’s a challenge the city has,” he said.

“With COVID now, it’s a problem that has come back in a lot of cities,” he said. “Homelessness is really on the rise nationally. It’s currently at the worst rate for us downtown that I’ve seen it since I’ve been here.”

Forward High Point recently heard a presentation from a private contractor called Block By Block that’s working in about 120 downtowns.

Wagner said violent crime in the stadium area is trending down the last few years.

“I’m not going to sugarcoat it by saying that we don’t have safety issues, but a lot of it really is a perception of lack of safety,” he said. “As to actual crimes in our downtown, what we’ve seen in the last four years actually is dramatic improvement in safety.”

One of the ways to fight the perception is through streetscape projects that would add landscaping and other aesthetic improvements, such as a project planned on N. Elm Street at the stadium, he said.

“We’re looking actively downtown at our streetscape, especially on Elm, extending that down English Road past Congdon Yards,” he said. “We’re looking at taking English and MLK back to two-way traffic. All these things really are a way of fighting the perception of a lack of safety and also providing actual safety.”

HIGH POINT — Pity the fate of poor High Point Police Capt. Allen Jerome Morris, whose stellar law enforcement career ended in two arrests — the arrest of a drunk and disorderly citizen, and then his own cardiac arrest, likely triggered by his prisoner.

To this day, Morris remains the city’s highest-ranking police officer killed in the line of duty.

And the prisoner? Well, compared to Morris, he came out smelling like a rose.

The year was 1928 — Sept. 16, to be exact — and Morris was responding to what he probably assumed would be a routine call. It seems a young man had had a little too much to drink at an establishment called the Do-Drop-In, a small cafe on E. Russell Street, and he was getting rowdy. Morris and fellow officer Bill Friddle answered the call.

At the cafe, the officers found 25-year-old Garland Franklin Shipwash, a local furniture factory worker who was described as being “mean drunk,” according to The High Point Enterprise’s front-page account of the incident. Shipwash apparently calmed down as the officers were arresting him, though, so much so that they didn’t even feel it necessary to handcuff him.

The officers began walking Shipwash toward the police station, holding onto his belt to keep him from bolting. After walking about a block, Friddle noticed Shipwash attempting to unfasten his belt.

“What do you think you’re doing?” the officer asked.

“I’ve gone about as far as I’m going,” the prisoner replied, and he frantically began trying to escape.

The two officers quickly overpowered Shipwash and wrestled him to the pavement, but he continued flailing and kicking like a bull at the rodeo.

“We were attempting to put the handcuffs on him, and he was kicking,” Friddle later explained. “His knee struck Captain Morris in the stomach, and Captain Morris fell over dead.”

After Morris collapsed, bystanders jumped in to help Friddle finish cuffing the prisoner. Meanwhile, a doctor was called to the scene for Morris, but it was too late.

Officially, Morris died of a heart attack — the 62-year-old officer had a history of heart trouble, according to The Enterprise — but the heart attack obviously was triggered by the prisoner’s forceful kick to his midsection.

A seven-year veteran of the police department, with five years as a captain, Morris was described by his fellow officers as “the best-liked man on the entire force,” according to The Enterprise.

Two days later, when Morris was memorialized and laid to rest at Oakwood Cemetery, dozens of officers from the High Point, Greensboro and Winston-Salem police forces paid their respects.

In an unusual bit of editorializing, The Enterprise suggested — a mere day after the officer’s death — that he was not physically fit for the job, and that the city was at fault for not requiring regular fitness testing of its police officers.

“The probability is that Captain Morris would have suffered no serious injury had he been in condition for the strenuous work that frequently is required of a policeman,” the writer pointed out. “...Physical tests should be a periodic requirement for the police.”

Valid point? Sure. But less than 24 hours after the man died of a heart attack? Um, no, that’s too soon.

Anyway, Shipwash was tossed in the city jail, facing charges of manslaughter, being drunk and disorderly, and resisting arrest. By the time he went to court — a mere two weeks after the incident — the manslaughter count had been changed to murder.

Alas, the murder charge did not stick in court. Shipwash was convicted on the other two charges — for which he was fined $70 and given a suspended sentence of three months — but he was found not guilty of murder, a verdict that must’ve come as a slap in the face for Morris’ family and fellow officers.

The story went on to say that both Shipwash and his attorney “appeared to be greatly pleased with the verdict.”

But if there’s such a thing as karmic justice, perhaps it happened here. On Jan. 23, 1954, at age 51, Garland Shipwash died. He was buried across town at Floral Garden Park Cemetery.

Cause of death? Yep, a heart attack. 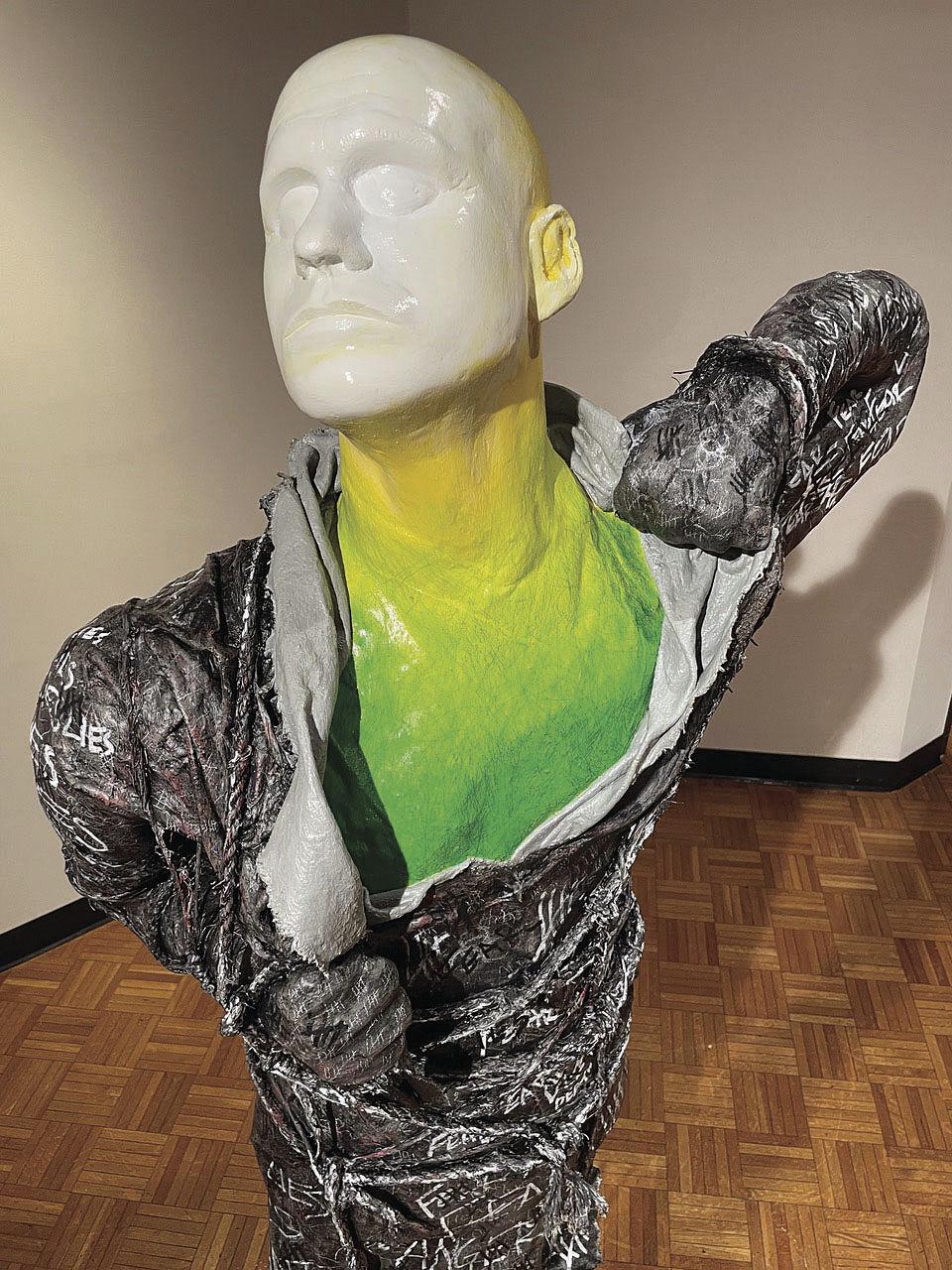