The narrowest margin involves the District 4 commissioners race in the eastern part of the county. Democratic challenger Mary Beth Murphy leads Republican incumbent Alan Branson by 18 votes out of a little more than 43,000 votes cast.

In the District 3 school board race, Republican incumbent Pat Tillman holds an 88-vote lead over Democratic challenger Blake Odum with nearly 37,000 votes cast. Tillman has 18,407 votes, or 51.12%, to Odum’s 18,319, or 49.88%. The district covers parts of Greensboro and northwestern Guilford County.

In the other contested school board race, unaffiliated candidate Deborah Napper holds a 187-vote lead over Republican Michelle Bardsley with nearly 36,000 votes cast. Napper has 18,048 votes, or 50.26%, to Bardsley’s 17,861, or 49.74%. The district covers parts of Greensboro and northern Guilford County. The winner will succeed retiring Democratic school board member Darlene Garrett.

When the candidate filing period concluded this past December, Bardsley initially was unopposed for the seat. Napper’s supporters mounted a successful petition campaign earlier this year to get her on the general election ballot as an unaffiliated candidate.

As of Wednesday afternoon, all three races fell inside the threshold for a recount. A second-place finisher can request a recount if the margin is 1% or less, said Guilford County Elections Director Charlie Collicutt.

A recount requested by a candidate won’t be held until after the election canvass, which will take place Nov. 13, Collicutt told The High Point Enterprise.

Under state elections statutes, a recount isn’t automatic. The recount only takes place if requested by the second-place finisher.

HIGH POINT — A pair of statewide judicial candidates with local ties are part of an apparent Republican sweep of N.C. Supreme Court and state Court of Appeals races, part of a strong statewide showing by the GOP in Tuesday’s general election.

State Supreme Court Associate Justice Paul Newby, who grew up in Jamestown, appears to have narrowly defeated Democratic Chief Justice Cheri Beasley. In the closest contest among the eight statewide judgeships, Newby had 2,670,773 votes, or 50.04%, to Beasley’s 2,667,031, or 49.96%, with all precincts reporting.

A representative with the Newby campaign couldn’t be reached Wednesday by the High Point Enterprise.

April Wood, who has served as a Davidson County District Court judge for the past 18 years, was leading her appellate court judgeship race by a larger margin, though still close. With all precincts reporting, Wood had 2,741,226 votes, or 51.8%, to Democrat Tricia Shields’ 2,550,369 votes, or 48.2%.

Wood said her victory and the success of the GOP judicial candidates show that most voters want a conservative approach on the state’s highest courts.

“We really honed in on that,” Wood told The Enterprise. “We emphasized the need for judges who are going to uphold the Constitution, not legislate from the bench but apply the laws as written.”

The triumphs in the statewide judgeships were among several strong showings by Republicans. In the top-of-the-ticket contest in the battleground state for the White House, President Donald Trump held a narrow lead over Democratic nominee Joe Biden.

GOP Sen. Thom Tillis also held a narrow lead over Democratic challenger Cal Cunningham in a nationally high-profile contest that will help determine which party controls the U.S. Senate for at least the next two years.

The Republican victories included Mark Robinson winning the contest for the second-highest elected office in the state. Robinson, who has ties to Greensboro, also became the first Black lieutenant governor in state history.

Democrats had fewer reasons to celebrate Tuesday night. But one victory represented a major one — Democratic Gov. Roy Cooper held off a challenge by outgoing GOP Lt. Gov. Dan Forest.

Democrats flipped two U.S. House seats in North Carolina as part of the Democrats maintaining control of the House for the new session of Congress early next year.

Democrat Kathy Manning won the local 6th Congressional District race by a wide margin against GOP challenger Lee Haywood. Manning becomes the first woman to hold the seat and the first Democrat who will serve in the 6th District in 36 years.

In the 2nd Congressional District in the Research Triangle, Democrat Deborah Ross cruised over Republican Alan Swain to flip the open seat to Democratic control.

Local Democrats rejoiced about taking back control of the Guilford County Board of Commissioners for the first time in 10 years. 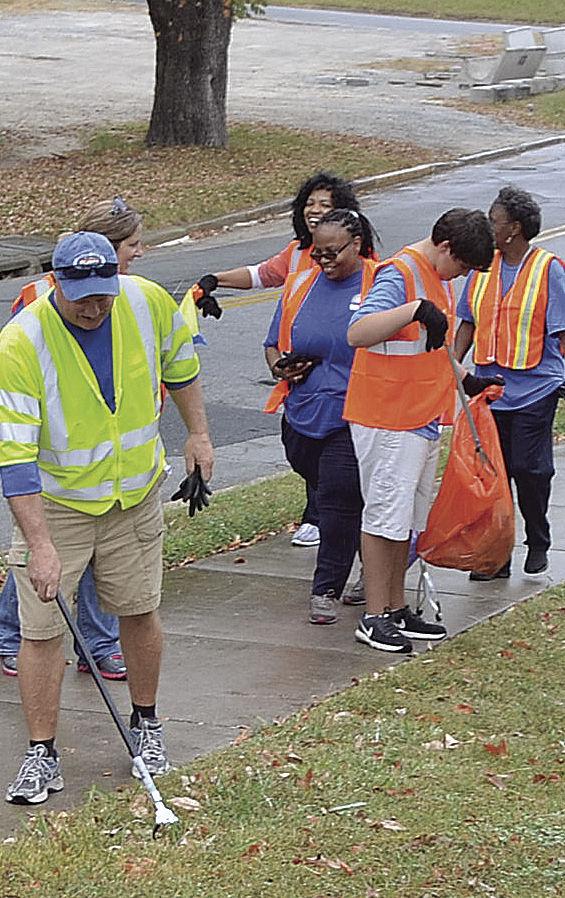 FILE | HPE The annual Big Sweep litter cleanup is set for Saturday at locations across the city.