HIGH POINT — Lowe’s Home Improvement has been approved by the city to open a warehouse in a new industrial park in north High Point.

The city issued a certificate of occupancy in August for 720 Pegg Road, Suite 107, which construction documents describe as a Lowe’s distribution center.

Lowe’s Home Improvement corporate headquarters did not respond to a request for comment.

A representative of the building owner, Beacon Partners, a commercial real estate firm based in Charlotte, could not be reached for comment.

It bought the property in September for $25.1 million from Scannell Properties of Indianapolis, the original developer of the industrial park, which is off Gallimore Dairy Road and has a Greensboro address, but is in the High Point city limits.

Beacon Partners is advertising 73,024 square feet available at 720 Pegg Road, between the Lowe’s facility and another 73,000 square feet of space that is also leased.

An application has been submitted to the city for the upfit of this space for a project called Bakemark, which is a company that makes baking ingredients.

The other building in the park, 780 Pegg Road, includes a Home Depot distribution center. The other tenant there is a Cranston Trucking freight terminal. 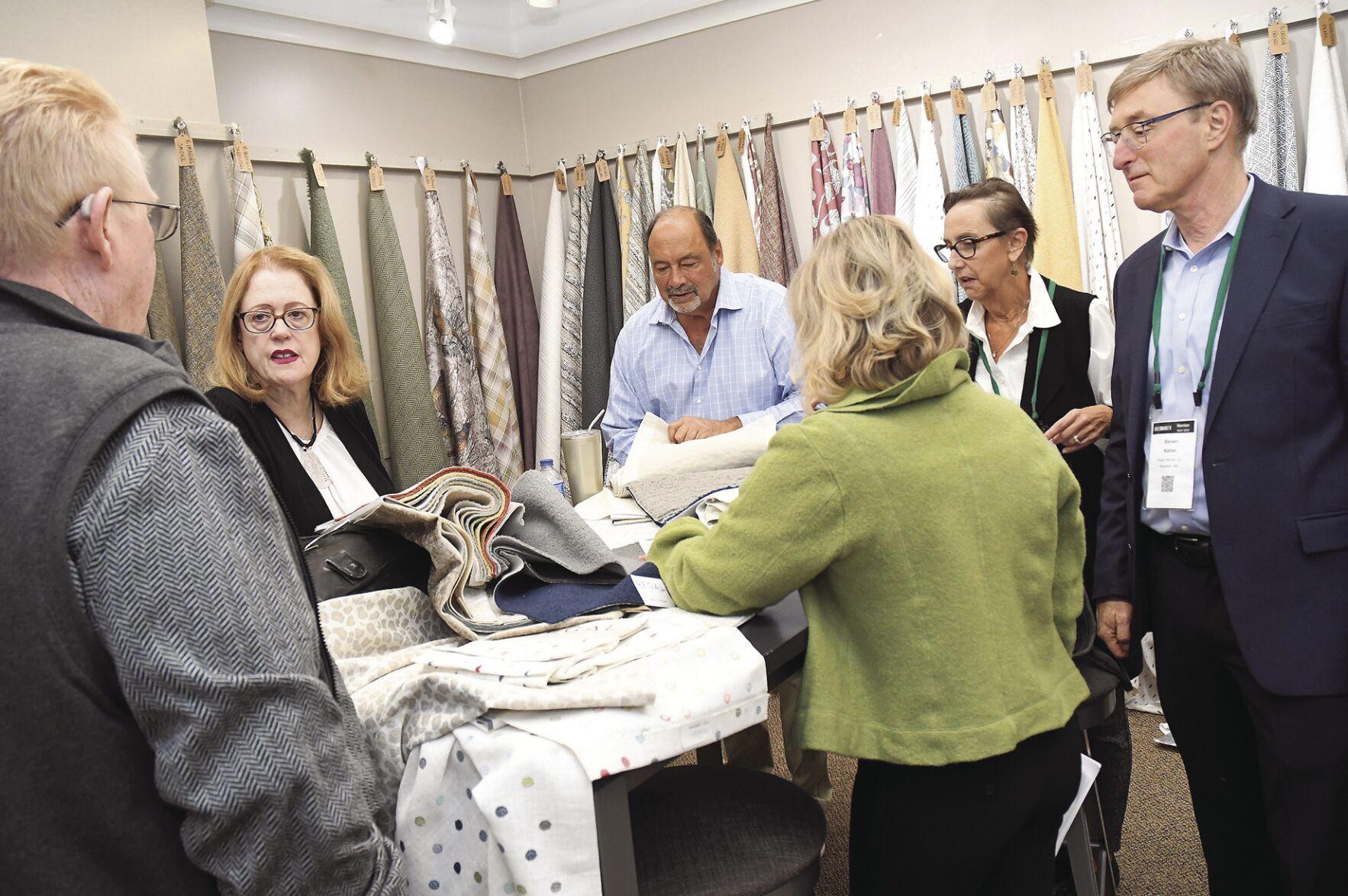 Steven Kahan, right, with Regal Fabrics, and other sales representatives from the company meet with clients to look at fabric samples in their showroom at Market Square Textile Tower during the Interwoven show Monday. Interwoven, hosted by International Textile Alliance and formerly known as Showtime, is a home furnishings textile exhibition that typically draws around 2,000 people and is held twice a year.

The new "history wall" at City Lake Park not only tells the history of the park, but also reflects how much the park has meant to the greater High Point community through the years.

HIGH POINT — You’ve likely heard the expression, “If these walls could talk.” Well, here’s a wall that actually can talk.

The recently unveiled “history wall” at City Lake Park, located in the park’s new meeting and events center, has a story to tell about the colorful history of the park and its significance through the decades to the greater High Point community.

“The wall tells the history of the park, going all the way back to the beginning, and tells why it’s been so important to the community,” said Tracy Pegram, assistant director of High Point Parks and Recreation. “We think it’s something the public will really enjoy seeing.”

The meeting and events center isn’t expected to officially open to the public until early 2023, but those wishing to come explore the wall can do so Wednesday morning, when the High Point Historical Society’s monthly history program will be held there. Pegram will give a short presentation about the history of the park, and then attendees will be allowed to spend some time exploring the wall.

The program is free and open to the public.

Using vintage photographs, old newspaper clippings, historical vignettes and even quotes from residents who have used the park, the wall display traces the park’s history all the way back to the late 1920s. It was in 1927 that the city built a dam across Deep River, creating City Lake as a water source, and within a year city officials were making plans to create a park in the natural area surrounding the lake.

Some of the wall highlights include:

• The so-called $100 plan, which tells how local landscape architect Reginald Tilson was hired — for a mere $100 — to draw a plan for the park. “It normally would’ve cost thousands of dollars,” Pegram said, “but it was during the Depression, and Tilson needed the work.”

• The 1935 grand opening of the park and the pool. At the time, a quarter would get you entry to the pool, the use of a towel and a bar of soap, and an envelope for storing your valuables.

• Boxing competitions that were held in the old gym at the park and featured future boxing stars as Ken Norton, Leon Spinks and Michael Spinks.

• Dances that took place in the pavilion overlooking the pool.

The history wall also will include a selection of videos featuring local individuals talking about their memories of the park. The videos are not quite complete, but will be soon, according to Pegram.

Pegram, who has been instrumental in gathering photos, clippings and individuals’ memories for the wall, said she was overwhelmed by just how much City Lake Park has meant to the community.

“The stories of family gatherings, company picnics, birthday parties, fishing on the lake, riding bikes, swimming in the pool or on a swim team, riding the train, attending a special event, and enjoying nature all weave the story of how important this park has been for many generations,” she said.

“There were so many interesting stories, each from a different perspective, but all showing appreciation for what this park has meant to them and their families.”

Tracy Pegram, of High Point Parks and Recreation, will talk about the history of the park, and attendees will have time to explore the history wall in the park’s new meeting and events center.

Admission is free and open to the public.

HIGH POINT — An unmarked High Point Police Department vehicle was stolen but later recovered this past weekend after it was left at a shop for repairs.

The SUV was found at 1:40 p.m. Saturday. Police did not say where it was or whether anyone has been arrested.