HIGH POINT — Fans filled the stands, watching the action with concessions in hand, as players moved around the field at Truist Point.

As much as it was a normal evening at the ballpark, it was also a little something different — the most obvious being the athletes on the field were playing soccer and not baseball.

“It was great,” said Chris Barnhart, the Fusion’s director of marketing. “The stadium was phenomenal — it really was. It was built for this, and we were able to show it could be done. We had a good turnout — over 500 people. So, that’s good for the first game out.”

Many of the players on both Fusion teams are from the area or have ties to the area, including through their college programs — which include N.C. State, North Carolina, UNCG, Elon and High Point.

The Fusion men, who beat NCFC 4-0, feature High Point University’s David Greene. It was the first match of the season for the women while the men improved to 3-0.

Normally the Fusion — formerly the Dynamo — play their home matches at Bryan Park’s Macpherson Stadium. So, playing in the brand new stadium in High Point was a bit of a change — and just a short drive for some of the players.

“I think it’s cool to be out here on this field,” said Ausburn, a junior midfielder at HPCA. “It’s like: Wow, now you know you’ve made it. Not that you’ve really made it, but it kind of gives you that feeling.”

Truist Point was built primarily as the home of the Rockers baseball team. But it also has the flexibility to do other things — for soccer, the mound came off the diamond, the turf field provided an even playing surface, and the goals fit perfectly behind third base on one end and under the scoreboard at the other.

Over the past few months, the downtown ballpark has checked off a number of events — including comedy shows and a youth-level soccer tournament. And the next step is to continue to improve hosting those types of events, Rockers general manager Christian Heimall said.

“There are certainly things we want to be able to do better for the next time around. But I don’t think much of that has to do with the execution of the actual day-of. I think today was a really good day for us, and tonight was a historic night for the city of High Point and the Triad to have this here,” he said.

The Fusion will play two more sets of matches at Truist Point this summer: a tripleheader June 12 — featuring the Academy youth match in the early afternoon, followed by the women’s match and the men’s match later in the evening — and then the men’s team only will host a match July 7.

Detectives speak with a resident of East Gate Village Condominiums on Friday morning in response to Tuesday’s fatal shooting of Robert Booth Sr. at the complex.

HIGH POINT — Police on Friday went door-to-door at a sprawling multifamily complex in south High Point, seeking information about the death of one of its residents, Robert A. Booth Sr., who was shot on Tuesday.

Detectives and volunteers with High Point Community Against Violence made their way to each unit in the dozen or so three-story buildings of East Gate Village Condominiums, talking with residents who answered their doors or were in the parking lot.

They handed out flyers that read, “Stop the Violence,” in a coordinated response that’s been standard for years in High Point after homicides.

As of Friday, no arrests had been reported in the death of Booth, 25, a pastor who was gunned down around 8:30 p.m. outside the unit he shared with his fiancee, Star Lane, at 304 Ardale Drive.

The walkway leading to the building was covered with candles that had spilled wax onto the concrete in a memorial for Booth near the site of the shooting.

Lane declined to comment when a reporter visited the scene.

The couple had just gotten engaged the Friday before Booth was killed, the same day he was ordained as pastor of Hood Holiness Church of God in High Point.

According to police, the suspects in Booth’s slaying were described as two Black men wearing ski masks who fled to a waiting getaway car.

Police said Friday they think the vehicle is a burgundy Hyundai Santa Fe.

There is only one way in and out of the condominium complex, which is off S. Main Street near Interstate 85 Business.

Terry Mitchell said he has lived in one of the units about 18 months, and gunshots, suspected drug activity and public disturbances are common in and around the complex.

“You get a lot of these younger kids in big crowds hanging out around the parking lot, and they get pretty rowdy,” he said. “A couple of the apartments get to drinking and fighting.”

Mitchell said he was home at the time of Tuesday’s shooting and heard gunfire, but didn’t see anything.

Police say that anyone with information related to this investigation can contact Crime Stoppers of High Point at 336-889-4000 or download the P3 mobile app for IOS or Android.

TRIAD — The alert system that the state created last fall to show how different parts of the state were faring against COVID-19 shows significant overall improvement in its most recent update.

The number of counties with low community spread of the virus, showing as green on the state map, has climbed to five, the first time there has been more than one, and 45 have only moderate community spread, light yellow on the map, according to this week’s update of the COVID-19 County Alert System report. That’s half of the state’s 100 counties.

“North Carolina’s key metrics continue to show decreasing COVID-19 spread,” the report said. “People getting vaccinated as quickly as possible is critically important to continue to slow the spread of the virus.”

A total of 41 counties have moved to an improved category of viral spread compared to two weeks ago, including Davidson, Forsyth and Randolph counties. Forsyth improved from significant community spread to moderate spread, and Davidson and Randolph both moved from substantial spread, colored orange, to significant spread.

The number of counties with substantial spread dropped from 19 two weeks ago to just nine now.

Just four counties in the state were in worse shape in this week’s update than they were two weeks ago.

The County Alert System is updated every two weeks. It was introduced last fall, as the virus was spreading rapidly, as a tool to help understand how their county was faring and what actions are needed to slow the spread of the virus.

A total of 55 counties remained in the same category as they were two weeks ago.

As was the case two weeks ago, no counties are experiencing critical levels of community spread of the virus. 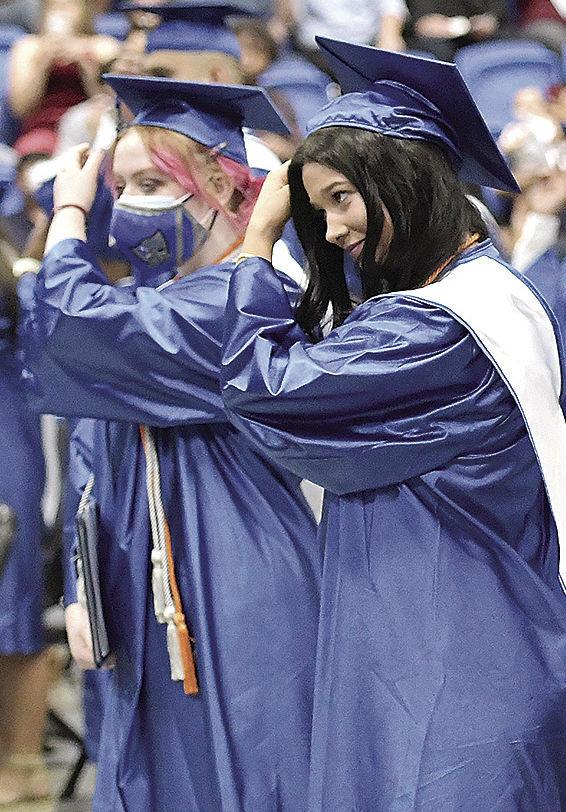