News
School board reverses on redistricting

The school board made the redistricting decision during its meeting Tuesday night. The vote was 8-1 with board member T. Dianne Bellamy Small dissenting.

The vote reverses what the school board decided during a retreat this past Saturday, when board members first considered starting with the 2022 elections. At the retreat, and without explanation, the six Democrats on the nine-member board rejected a resolution to adopt the Guilford County Board of Commissioners map, which the commissioners approved Thursday.

Since the creation of the merged county school district in 1993, school board and commissioners district maps have mirrored each other.

During the meeting Tuesday night, several speakers urged the school board to adopt the Guilford County Board of Commissioners redistricting map, saying it was the fairest approach and easiest for voters to understand.

Democratic Chairwoman Deena Hayes said she and other board members who had declined to adopt the same map at their retreat Saturday did so because they wanted more time to examine the final redistricting plan adopted by the commissioners.

The approved map — labeled Map “F” — can be viewed at the Guilford County website, www.guilfordcountync.gov.

Guilford County voters will fill five of the nine school board seats in next year’s elections. Primaries will take place in March with the general election in November 2022.

The Guilford County Board of Education also took the following actions at its meeting Tuesday evening:

• Extended the school system's COVID-19 mask mandate for another month. A monthly vote on whether to continue it is required by state statute.

• Agreed to replace the HVAC chiller at Welborn Academy of Science and Technology in High Point.

• Contracted with the Guilford County Department of Health and Human Services to provide five more school nurses for the current academic year. 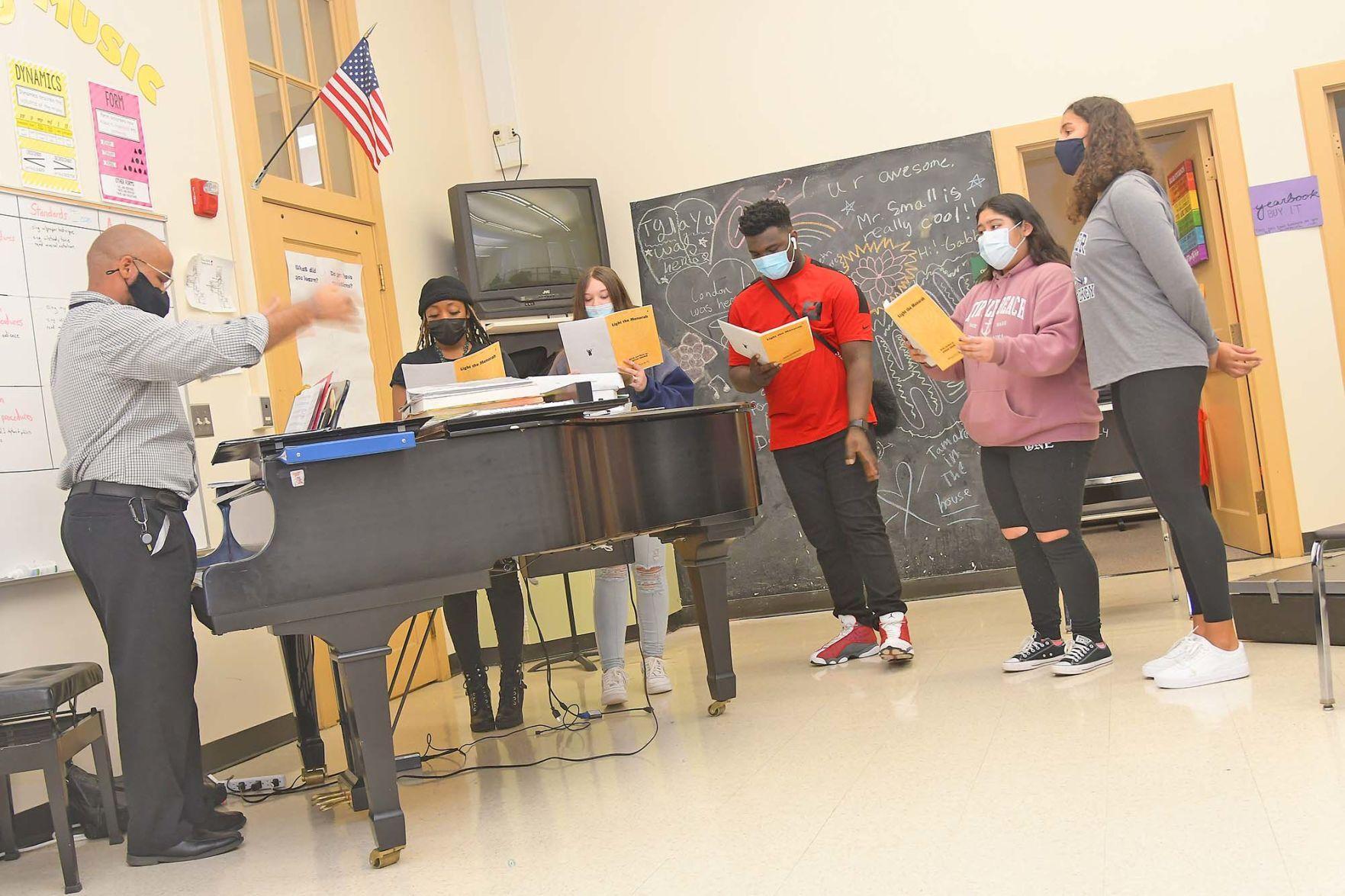 Penn-Griffin School for the Arts chorus teacher Wesley McCleary-Small, left, conducts eighth-grade students, from left, Lauryn Brawner-Alexander, Elizabeth Hall, Elijah Johnson, J. Rodriguez-Perez and Gabriella Primus as they practice the song “Light the Menorah” for their upcoming Winter Chorus Concert on Dec. 14 at 7 p.m. in the Burford Auditorium. The public is currently invited to attend performance, however, that may be subject to change.

HIGH POINT — Local high school seniors who wrote award-winning essays about how good citizens help the country were recognized Tuesday by the Alexander Martin Chapter of Daughters of the American Revolution, based in High Point.

This year’s essay question was “How do the qualities of a good citizen (dependability, service, leadership and patriotism) help support our nation?”

The essays ranged from historical views of the country’s first settlers to today’s struggles.

Briggs said she watched in horror on Jan. 6 when rioters stormed the Capitol building, with some chanting threats, although they may have thought of themselves as good citizens. Good citizens actually are peaceful, kind and seek the truth, Briggs said. A good citizen would seek out facts, not spread misinformation, get a vaccine and wear a mask to show service to others, Brigg said.

“With the deadly pandemic, attacks on voting rights, rampant gun violence, flooding misinformation, burning woods, anti-Asian hate, loss of women’s rights and systemic racism, someone needs to step up to turn this dark into light, to turn this anger into love,” Briggs said. “Simple actions help in this hard time. To show patriotism, act for the good of the country.”

The daughter of Laurie and Dan Briggs will represent the DAR chapter at the district level, according to Beth Tuttle, who co-chairs the Good Citizens Awards with Emilie Rogers.

Briggs said that after graduation, she plans to attend college and major in international relations, human rights, journalism and Mandarin.

Rhodes, the first student to speak to DAR members, began her essay with more of a historic view.

“Our nation was first born out of a people who understood the meaning of hard work,” Rhodes said. “They knew that in order to create the nation they had envisioned they would have to give of themselves and work together, hoping to reap future prosperity.”

The daughter of Heather and James Rhodes said she plans to attend a four-year college and grad school and major in either law, history, English or political science.

Quattlebaum explored the foundational principles of service, leadership, dependability and patriotism, saying that without those, the nation would fall.

“We have our freedoms because of the patriotism of those who came before us,” Quattlebaum said. “The necessities of our nation have not changed from what they were at its founding. Patriotism was a necessity then and continues to be a necessity to this day.”

The daughter of Sara and Curt Quattlebaum said she plans to pursue a bachelor’s degree in nursing and a master’s degree to become a nurse practitioner, specializing in pediatric oncology.

Hannah Covey, a senior at Penn-Griffin School for the Arts with dual enrollment at GTCC Jamestown, also wants to continue her education to become a nurse anesthetist. Covey is the daughter of Jessica and Keith Covey.

“I believe that a good citizen is someone who strives to help others and dedicates their life to doing good in the world,” Covey said. “My whole essay is about my 13 years in Girl Scouts and how we’ve always worked with food-disparaged people in the High Point community. It’s just opened my eyes to a lot of the struggles in High Point right now and what I can do to give back to my community.”

Atkinson noted how good citizens and brave leaders were willing to leave their comfortable ways of life to serve their fellow Americans in hard times and during wars. The daughter of Catherine and Bruce Atkinson plans to attend Clemson University and major in elementary education. She also wants to obtain a graduate degree in Speech and Language Pathology or Occupational Therapy to serve children with developmental delays.

Majett, the daughter of Michelle Gonzalez, plans to attend either Campbell University or High Point University to major in pharmacy and pursue a doctorate in pharmacy with hopes of owning a pharmacy.

“The essays were so inspirational,” Halstead said. “They were indeed food for thought.”

HIGH POINT — A chain of ice cream stores that once had a location in High Point is planning a return, but this time at a different site.

Mark Lindsay of Lindsay Real Estate Holdings said during a zoning hearing Tuesday that a land-use change being sought for 1130 Eastchester Drive is for construction of a Bruster’s Ice Cream stand.

Lindsay is part of a group asking the city to rezone an undeveloped acre next to the shopping center that has Chu’s Express and La Hacienda Mexican Restaurant from an office-institutional district to a conditional zoning general business classification.

The Planning and Zoning Commission unanimously recommended approval of the request, which will be considered by the City Council next month.

Bruster’s Ice Cream previously had a location in High Point on N. Main Street next to the Walgreens drug store at Westchester Drive.

It closed in 2016 when the property was sold to the developers of the Westchester Square shopping center, which is anchored by a Publix grocery store.

The change being sought by Lindsay’s group would make the zoning site the northern boundary of the Center Stage Shopping Center, which also includes a Planet Fitness and Get Air Trampoline Park.

The ice cream stand would be limited to 1,700 square feet in size. It would have a drive-thru window but no indoor seating.

In a separate case Tuesday, the commission also unanimously recommended approval of a zoning change that would support an expansion of the Pandora’s Manor bed and breakfast and event center on W. High Avenue.

The owners are asking the city to rezone two vacant parcels at 512 and 514 W. Green Drive behind their facility from heavy industrial to central business.

They want to use this as retail space to sell wedding gowns and other items to support their wedding business at the venue, according to the city.