HIGH POINT — It has been difficult for furniture companies to hire anyone in recent years, even for skilled, high-paying jobs, and there is no easing on the horizon in the competition for workers, representatives of local companies said during a discussion forum Thursday.

So the group will reconvene in January to begin work on a strategy to make inroads on building broad awareness, but especially among young people, of the pay and opportunities available.

The discussion at Congdon Yards was organized by GuilfordWorks, the local workforce development agency, and drew about two dozen people, a mix of furniture executives, human resources officials and marketing professionals.

Part of the problem is a broad perception that furniture manufacturing all but went away in the 2000s, and part is a lack of knowledge about how the industry and the jobs that are available are not old-fashioned factory jobs, several participants said.

Arturo Campana of Cisco Brothers Corp. said when his California-based company opened a factory in High Point five years ago to serve East Coast customers, “we could not hire anybody to save our lives.”

Finally, after advertising in Spanish-language media, he found the workers he needed, but he believes there are many people who don’t realize the opportunities that exist in the industry.

David Farris of Ted Scott Designs said some people don’t even seem to realize there is still furniture manufacturing here, and he expressed frustration with what he perceives as a lack of support by local elected officials and the school system.

“There’s nothing in schools to drive young people to our industry,” he said.

Farris asked whether anyone else in the room was “freaking out” at the prospect of competing for skilled workers against such companies as Toyota, which is building a plant in northern Randolph County to make batteries for electric vehicles, and Boom Supersonic, which plans to build a plant at Piedmont Triad International Airport to build supersonic passenger jets.

Most in the room raised their hands.

Joyce Ryce of GuilfordWorks, who organized the discussion, said she has seen the kinds of modern, comfortable, high-tech work spaces the industry now has, and she thinks a lot could be accomplished by better publicizing the current work and pay environment, especially targeting young people with the message.

Stuart Gans of Classical Elements and M2C Studio said it will be important to emphasize creative and design-oriented elements of jobs.

“That’s what High Point is all about,” he said.

Ryce said that GuilfordWorks will get the Guilford County Schools’ Career and Technical Education program involved in discussions as well. 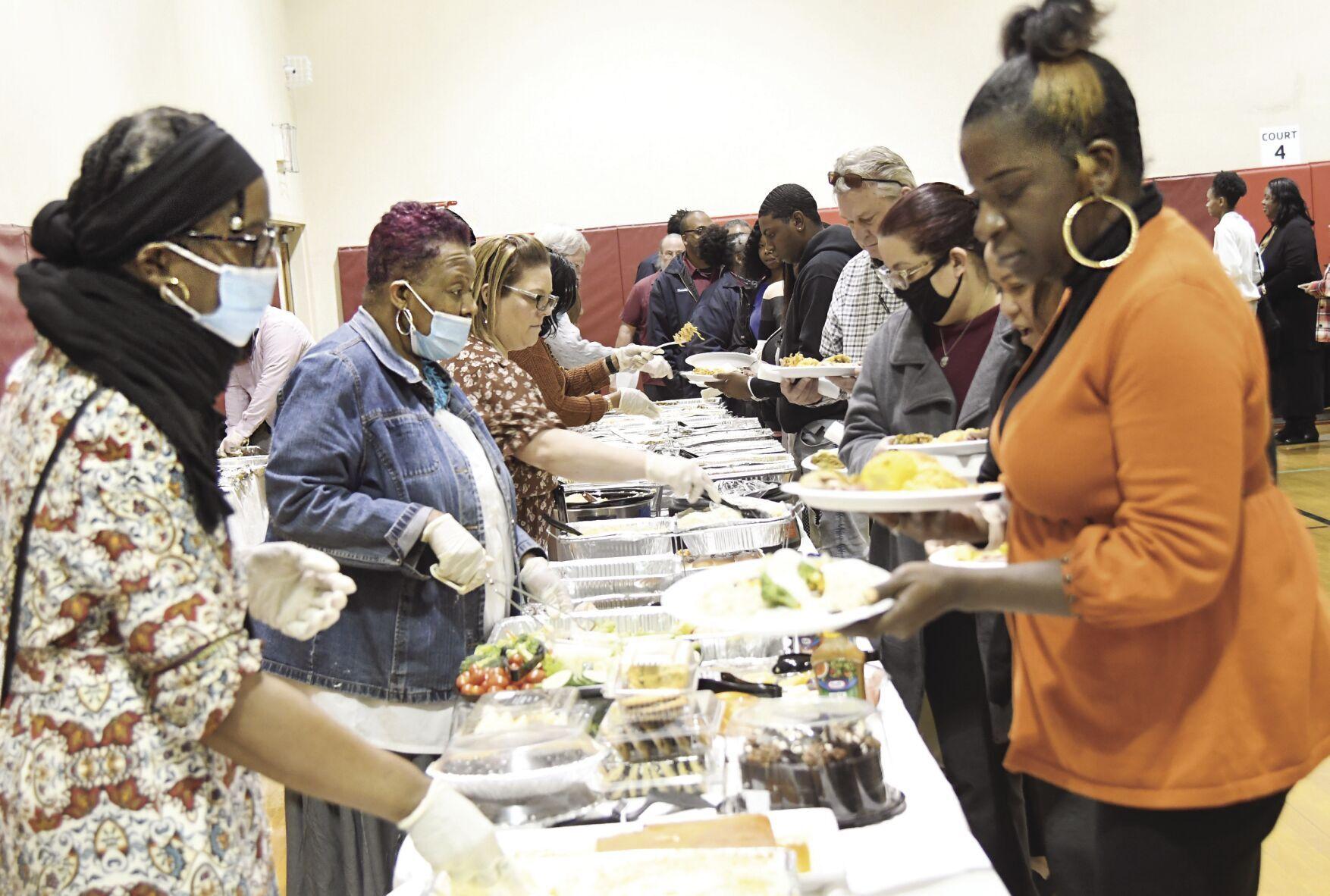 People line up for a buffet luncheon served and prepared by staff members with the High Point Housing Authority during the authority’s annual Thanksgiving Luncheon, held at the Hartley Family YMCA on Thursday. The turkey, stuffing and gravy was provided by High Point University. The authority invited as many partner agencies as possible to thank them for their continuous community support. Attendees arrived with unwrapped toys in support of the authority’s holiday toy drive.

HIGH POINT — A proposed industrial park on the city’s southwest corner has moved a step closer to development.

A High Point limited liability company last month purchased several undeveloped parcels totaling about 194 acres, most of it between National Highway (N.C. 68) and South Road, for $4.3 million, according to property deeds.

The buyer, South Road Holdings LLC, lists the same office address at Congdon Yards as another entity that got the bulk of the land annexed and zoned by High Point in August.

That company lists developer Hunter Oglesby as its principal, and he could not be reached for comment.

The seller of most of the property was Coggin Real Estate LLC, which is managed by the family that owns High Point residential furniture manufacturer Thayer Coggin, whose headquarters are on South Road near the eastern border of the proposed industrial park.

The property assemblage includes two tracts on National Highway that total about 22 acres that were sold by Barbara H. Kennedy of Thomasville.

Oglesby got the site, most of which is in Davidson County, annexed by High Point in order to have access to city water and sewer service.

It was rezoned to a conditional zoning heavy industrial district by the city. The developer agreed to eliminate the most intense uses allowed by heavy industrial zoning. This would still allow most manufacturing and light industrial uses, such as warehouse and distribution operations, on the site.

The park could span 1.18 million square feet of building space across multiple structures, according to concept plans presented to the city during the zoning hearings for the project.

No specific development plans have been submitted yet.

The museum, which opened April 30, offers 75,000 square feet of interactive exhibits and activities.

In its first six months, the museum drew more than 85,000 visitors from across North Carolina and 41 other states, Executive Director Megan Ward said.

“Our children’s museum has become a community meeting space for local families to learn and play,” she said. “We’ve also been thrilled to welcome thousands of guests who have driven here from Raleigh, Charlotte and other cities to visit us. Our staff enjoys telling visitors about our excellent restaurants and all that High Point has to offer.”

The Visitor Attraction of the Year Award recognizes an attraction that sets the standard for an exceptional visitor experience, said Melody Burnett, president of Visit High Point, which nominated the museum for the award.

“In just a short amount of time, the museum is developing High Point as an attractor for leisure visitors as well as a destination for families to call home,” she said.

GUILFORD COUNTY — The Guilford County Board of Commissioners is considering changes to the policies that govern county money distributed each fiscal year to community nonprofits, including groups in High Point, and adopted one reform on audits during a work session Thursday.

The commissioners discussed nonprofit funding prior to the board’s regular evening meeting at the Old Guilford County Courthouse in downtown Greensboro.

This past summer, the board approved $1.7 million for community agencies. High Point nonprofits that received funding for the current fiscal year include the Carl Chavis branch of the High Point YMCA, which received $50,000; the Friends of John Coltrane that organize the Labor Day weekend music festival, $25,000; the High Point Arts Council, $50,000; and the Southwest Renewal Foundation, $150,000.

One policy the commissioners changed during the work session raises the threshold for exempting groups that have to perform an external audit to qualify for a grant. Nonprofits receiving $10,000 or less have been able submit receipts and expenditure reports in lieu of an external audit, which involves a greater expense.

The commissioners voted unanimously to raise the threshold exempting an external audit for nonprofits getting a grant of up to $100,000 and made the policy retroactive to the current 2022-23 fiscal year.

Commissioner Frankie Jones Jr. said for some groups, the cost of the external audit could exceed the amount of the grant.

Commissioner Kay Cashion said the board and county staff need to be more clear about when the grant application process begins and ends. For the next fiscal year, the county staff is recommending to open an application process in January and present a reviewed list of possible recipients to the commissioners in February or March. The next fiscal year takes effect on July 1.

The board plans to discuss the issue further at its next meeting at 5:30 p.m. Dec. 15 at the Old Guilford County Courthouse at 301 W. Market St.

The approach of the commissioners to funding community nonprofits has shifted in the past six years based on political party control of the board. When the Republicans held a 5-4 edge, funding for community-based nonprofits was removed from the county budget starting with the 2016-17 fiscal year.

The Guilford County Board of Commissioners presented a centenarian certificate of honor to Erline Dennis of High Point to mark her 102nd birthday during the board’s meeting Thursday night. Dennis spent 40 years as an educator in the former High Point school system and Guilford County Schools. She attended the meeting joined by family and friends.