HIGH POINT — Could the city of High Point legally provide some form of reparations to address injustices of the past like slavery and segregation?

That’s one question hovering over a proposed city commission that the High Point NAACP branch wants formed “to study and develop reparation proposals for African Americans.”

A City Council committee has recommended establishing the commission. The matter could go before the full council Sept. 20.

“Does North Carolina recognize the legal principle of reparations?” said James Mayes, an attorney leading the effort to get the commission formed. “Of course it does.”

Mayes told the committee on Aug. 4. that reparations have taken a variety of forms at the international, national and state level, most recently when North Carolina awarded monetary damages to living victims of a state-run program of forced sterilizations.

He and other reparations supporters argue that the harmful effects of what they characterize as High Point’s history of racism and discrimination continue.

What can be done about it?

City Attorney JoAnne Carlyle said it may be legally questionable what cities are allowed to do when it comes to reparations.

“Often, what the federal government, what the state can do, we cannot do unless it’s actually in writing in the statutes and the state allows us to do it,” she said. “To have a commission appointed to look at reparations, I think you’re going to hit a legal wall. When you look across the state and what other cities have done, the legal authority is completely shaky, as far as the grounds for a municipality to award those.”

Asheville is apparently the only city in the state that has actually committed money toward reparations. According to the Associated Press, its City Council in June 2021 approved $2.1 million for investments in areas where Black residents face disparities, but not for direct payments to residents.

The city of Evanston, Illinois, near Chicago, plans to distribute $10 million in reparations to its Black residents, according to The Associated Press.

A U.S. House of Representatives panel has advanced a reparations bill at the federal level, and other communities are exploring legal questions that could provide some clarification.

“There may be some authority coming down the pipe, but right now, we don’t have that same authority,” Carlyle said.

Supporters, such as Brad Lilley, argue that a commission should be the forum to hash out these issues.

“One of the things that we refrained from doing was to come and tell you what we would consider reparations would be or what it would look like or what forms that it would take, because we understand that should be the work of the commission that we’re asking to be formed,” Lilley said.

HIGH POINT — Sandra and Joey Paylor made the nearly 1 1/2-hour drive Saturday from their home in Roxboro near the Virginia border to take in the John Coltrane International Jazz & Blues Festival for the first time.

As they soaked in the music on a picturesque, sunny afternoon, the couple found the trip was more than worth it.

The Paylors were among thousands of music lovers who descended on High Point from points near and far for the 10th annual festival that kicked off Saturday.

The expanse of music fans stretched along the lakeshore at Oak Hollow Festival Park from the spacious stage where the bands performed. The guests wore wide-brim hats or adorned their chairs with covers to offer shade and relief from the unrelenting sun.

This weekend’s festival, which concludes Sunday, marks the first one in two years. The 2020 event was called off because of the coronavirus pandemic.

Festival organizers went to great lengths to counter COVID-19 at the outdoor venue.

Guests need to wear a mask to enter the park and show proof of either a COVID-19 vaccination or a recent negative test.

Festival guests are asked to maintain social distancing when setting up chairs to enjoy the musical acts. On-site volunteers and festival staff also have to be fully vaccinated.

Organizers of the festival through the Friends of John Coltrane board of directors are following U.S. Centers for Disease Control guidelines to promote public health safety at the event.

As she sat in a foldout chair covered by a small umbrella, Sandra Paylor said she and her husband felt safe from the virus at the festival. The organizers were taking thorough protocols, she said.

The couple were celebrating good fortune in attending the show — they won free tickets in a radio promotion.

The allure of jazz for them: “It’s just soothing,” Sandra Paylor said.

Hasan and Kimberly Crockett of Durham also were making their first trip to the festival on Saturday. Hasan Crockett told The High Point Enterprise that a friend raved about the event and encouraged the couple to attend.

“We thought we would come and enjoy it,” he said.

Hasan Crockett said that he’s cherished jazz since he was a teenager discovering his love for music.

“It’s so expressive,” he said. “It’s our musical gift to the world.”

The festival honors the legacy of Coltrane, who changed the trajectory of jazz through his musical gift as a saxophonist and composer of songs. Coltrane grew up in High Point and graduated from the former William Penn High School, now Penn-Griffin School for the Arts that’s part of Guilford County Schools.

The iconic musician’s legacy was reflected in one of the first acts on stage Saturday afternoon. Local youth played for the appreciative crowd under the banner of the John Coltrane All-Stars, a new generation taking up jazz.

The High Point Enterprise has covered a wide variety of “freak” stories through the years, from two-headed calves and snakes to odd-shaped vegetables.

A High Point Enterprise photographer shot this unusually shaped potato, undoubtedly brought to the newspaper by a reader, during the 1950s. The caption describes it as a potato that resembles a coiled-up snake. It’s not clear if the photo was actually published in the newspaper, though.

HIGH POINT — Step right up, ladies and gentlemen, boys and girls of all ages!

Read all about the incredible baby born with two heads! Feast your eyes on the amazing two-headed calves, the four-legged chickens and the double-headed snake! And don’t miss the marvelous menagerie of vegetables that look like honest-to-goodness human beings!

It’s all part of The High Point Enterprise Freak Show, a journalistic trip back through the yellowed pages of your hometown newspaper, which for decades published news items — though rarely photographs — of curious freaks of nature.

As you may know, The Enterprise was not unique in its fondness for publishing stories about 12-pound beets and dinosaur-shaped potatoes and two-headed calves — almost all community newspapers did it, especially during the first half of the 20th century — but The Enterprise ran so many freak vegetable and animal stories, you’d have thought P.T. Barnum was editing the paper.

In fact, during the early 1930s, The Enterprise published a regular column called “Mother Nature’s Strange Pranks,” which listed items that Enterprise readers had brought to the newspaper offices to show off: A mass of sweet potatoes that resembled the head of Medusa. A 2-foot-long string bean. An 11-foot okra stalk. A potato shaped like a saxophone. A gourd that had grown into a knot. Siamese bananas joined at the side like, well, like Siamese twins.

We’re not making any of these up.

Then readers began bringing in unusual insects and other critters for the column: A rhinoceros beetle. A banana scorpion. A hickory horned devil caterpillar. A “strange bug with an evil-looking face.” A bird with a clubfoot. A large, two-toned rat.

Again, we’re not making these up.

And get this: The Enterprise put all of these specimens — the potatoes, the bugs, even the rat — on display in the front window of the newspaper’s office, where citizens could come by and gawk at them, like some kind of bizarro window display at Christmas.

Also displayed in the “window of weirdness” was a boll weevil captured in the summer of 1932 by High Point’s J.M. Jenkins. According to an item in the “Mother Nature’s Strange Pranks” column, Jenkins sealed up the insect in an airtight bottle and put it in his refrigerator — the article doesn’t say why. After 21 days, though, he took it out and discovered to his amazement that the little fella was still alive and kicking. What else could Jenkins do but go straight to The Enterprise with his bodacious bug?

Even after the “Mother Nature’s Strange Pranks” column came to an end, the freaky fruits and vegetables kept coming. In 1942, there was a sweet potato that looked like a battered prizefighter, with one eye missing, a mashed nose and a gashed face. Another sweet potato, same year, looked like a Chinese dragon. A 1950 sweet potato looked like a giraffe, especially when the man who brought it inserted four sticks to serve as its legs.

Also from the 1950s, we found an unusual photograph in the High Point Historical Society’s collection of High Point Enterprise negatives. It’s not clear whether the photo was ever actually published, but it shows a person’s hand holding up a potato which, according to the caption, resembles a snake, coiled up and hissing. That’s true, but it also looks like — dare we say it? — a bowel movement.

Sorry, but that’s the stinkin’ truth.

One of the sadder stories was the tragic tale of the two-headed baby. The year was 1922, and newspapers across the state, including The Enterprise, reported that a baby girl with two heads had been born to a Thomasville couple, Mr. and Mrs. Lloyd Matthews.

Normally, that would’ve been front-page news with an exclamation point — and it certainly would’ve merited a photo — but as The Enterprise story pointed out, the baby didn’t actually have two heads. She was born with a meningocele, described as a “protrusion from the brain at the back of the head, which is said to be about one-third larger than the head and covered with hair of a different color. Instead of a skull like the normal head, the extra head only has a scalp covering, being in the shape of a head, but having no well-defined features such as eyes, nose, mouth, etc.”

Sadly, the child was not expected to live.

Meanwhile, numerous two-headed animals were rearing their, um, heads in High Point throughout the first half of the 1900s. In 1920, for example, The Enterprise reported that the city’s chamber of commerce had a two-headed calf and a two-headed kitten on display at its offices, courtesy of a local taxidermist. The headline read, “Museum of Two-Headed Freaks,” although we doubt they used that in any of the tourism brochures.

Other examples, all reported in The Enterprise, included a four-legged chicken (1920), a two-headed snake (1922) and several two-headed calves (1920, 1922 and 1956). In the case of the 1956 calf — er, calves? — a High Point couple, Mr. and Mrs. Howard Lyon, sold the animal to a Florida showman who specialized in two-headed cattle, and they reportedly made a handsome profit from the sale.

Proving yet again that in the freak-show world, sometimes two heads really are better than one. 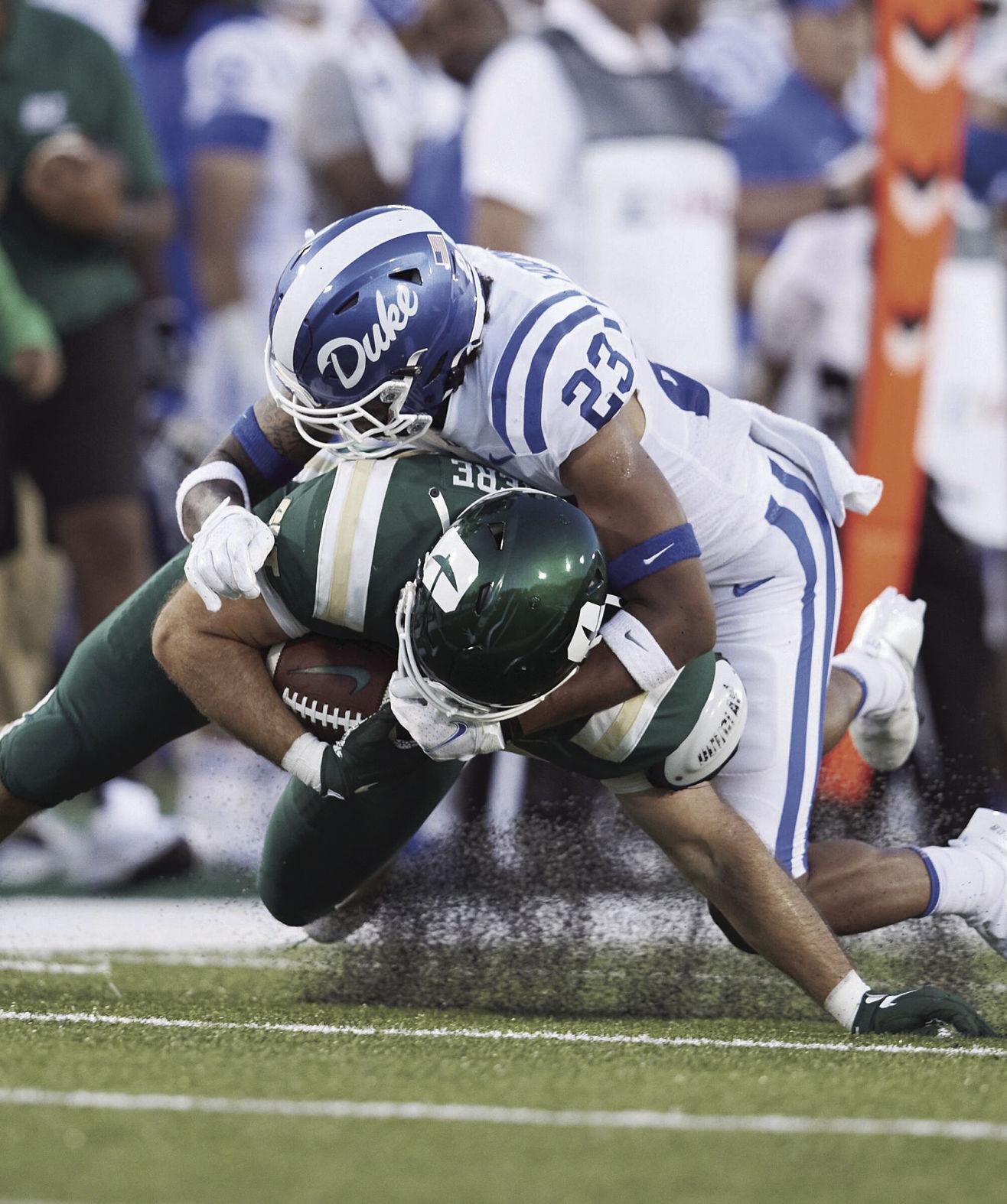