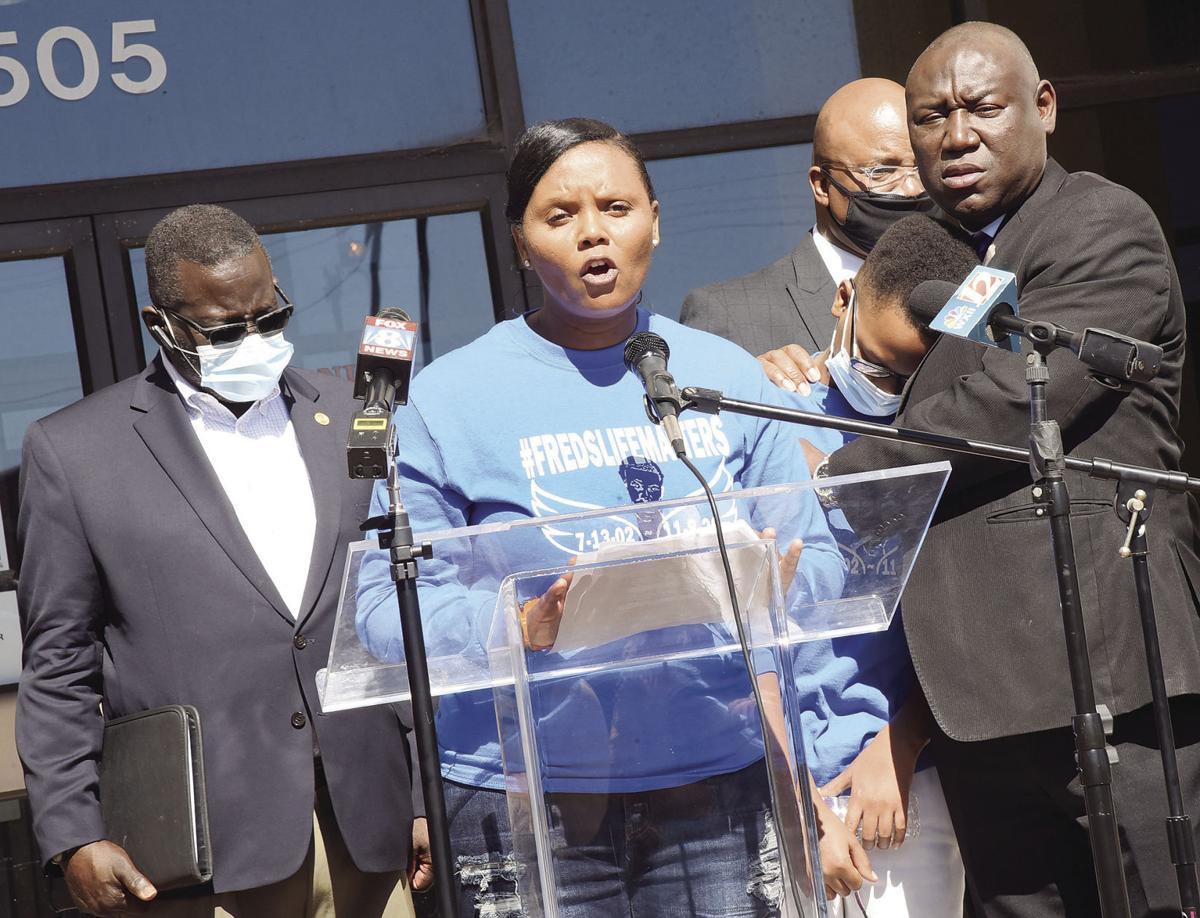 At a February press conference in High Point, Vivian Wright shares the story of how Fred Cox Jr. saved her life and her son’s life on Nov. 8, 2020, when gunfire was exchanged at a funeral they were attending. At right, civil rights attorney Ben Crump, who represents the Cox family, comforts Wright’s son, 13-year-old Tavaris Johnson Jr. 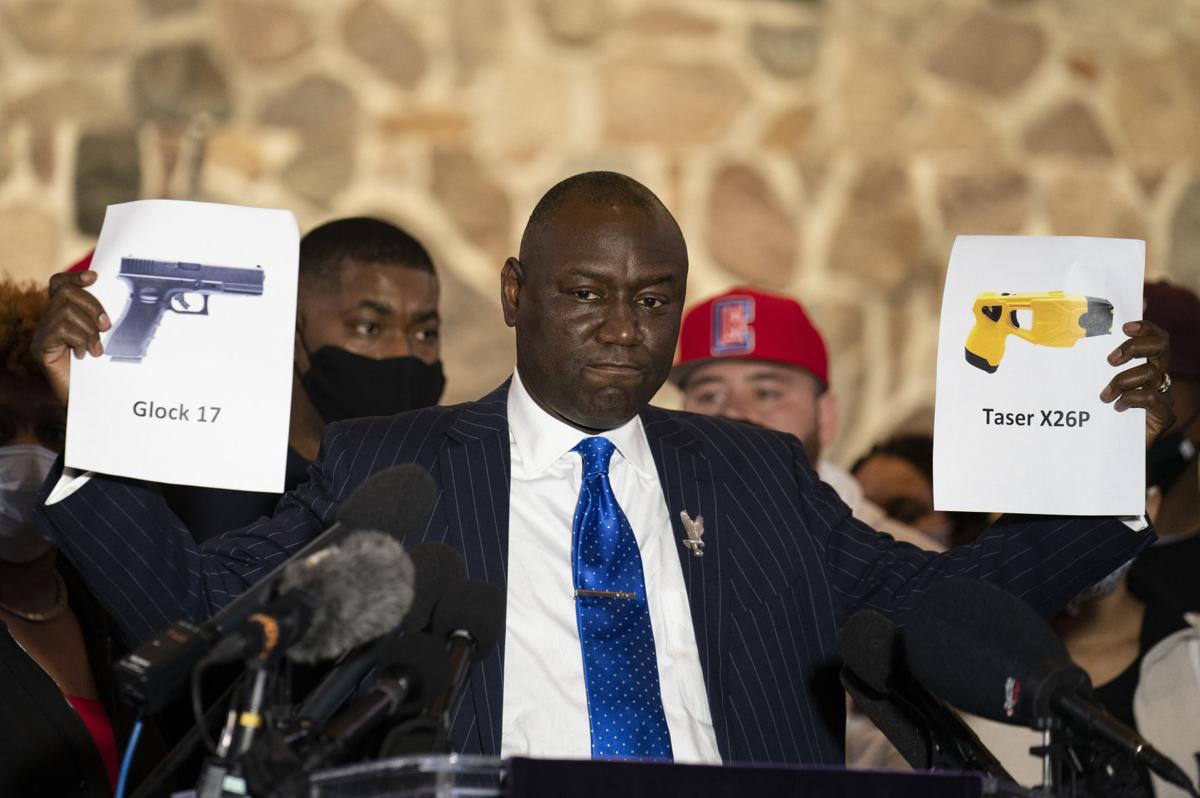 Attorney Ben Crump, representing the family of Daunte Wright, holds up images depicting an X26P Taser and a Glock 17 handgun on April 15 during a news conference in Minneapolis.

At a February press conference in High Point, Vivian Wright shares the story of how Fred Cox Jr. saved her life and her son’s life on Nov. 8, 2020, when gunfire was exchanged at a funeral they were attending. At right, civil rights attorney Ben Crump, who represents the Cox family, comforts Wright’s son, 13-year-old Tavaris Johnson Jr.

Attorney Ben Crump, representing the family of Daunte Wright, holds up images depicting an X26P Taser and a Glock 17 handgun on April 15 during a news conference in Minneapolis.

In less than a decade, Ben Crump has become the voice for the families of Trayvon Martin, Michael Brown, Breonna Taylor and George Floyd — Black people whose deaths sparked a movement.

He has won multimillion-dollar settlements in police brutality cases. He’s pushed cities to ban no-knock warrants. He has told a congressional committee that reform is needed because “it’s become painfully obvious we have two systems of justice; one for white Americans and one for Black Americans.”

“He’s a real believer in what he’s doing. He has taken the attacks. He has taken the cases that others wouldn’t take,” Sharpton said, adding, “People can go to him. The reason I trust him is because he has never misled me. Good or bad, he’ll tell me the truth about a client.”

These days, he seems to be everywhere — including High Point, where he is representing Tenicka Shannon, whose teenage son, Frederick Cox Jr., was shot to death by a Davidson County Sheriff’s Office deputy after a memorial service at Living Water Baptist Church on Brentwood Street in November.

In April, he joined with George Floyd’s family in celebrating the conviction of ex-officer Derek Chauvin. Then he was among the mourners at the funeral for Daunte Wright, who was shot during a traffic stop in suburban Minneapolis in the week leading up to Chauvin’s verdict.

After Wright’s funeral, he was back in Florida to call for a federal investigation of a deputy who fatally shot two Black teenagers. And he began this past week demanding that police in North Carolina be more transparent after deputies fatally shot a Black man outside of his house in Elizabeth City.

Critics see him as an opportunist who never fails to show up amid another tragedy. But those who know Crump say he’s been fighting for fairness long before his name was in headlines.

“Where there’s injustice, that’s where he wants to be,” said Ronald Haley, a Louisiana attorney who’s among a wide network of lawyers Crump works with on lawsuits. “He understands he’s needed everywhere, but he also understands he can’t be everywhere.”

Crump, 51, is a tireless worker who mixes Southern charm, a talent for attracting media attention to his cases and a firm belief that racism afflicts the nation, and the courts are the place to take it on.

He has an uncanny way of making his clients feel like kin, they say.

“He has never missed a Thanksgiving to check in on me, he calls on Christmas,” said Allisa Findley, who first met Crump three days after her brother, Botham Jean, was fatally shot in his apartment by a white Dallas police officer who mistook the Black man’s apartment for her own.

“Even the little things, he makes time for it, when there are no cameras rolling,” she said. “He does feel like family. I consider Ben family.”

Terrence Floyd, the 42-year-old brother of George Floyd, said Crump’s attention and care for his family over the last year has bonded them beyond the attorney-client relationship.

“It feels like it’s more family-based than business,” he said. “After a while, I went from calling him ‘Mr. Crump’ to calling him ‘Unc,’ like he was one of my uncles.”

Crump keeps up a dizzying schedule that takes him all over, but he makes sure he’s home for Sunday services at Bethel Missionary Baptist Church. He lives in Tallahassee with his wife and their 8-year-old daughter, Brooklyn; he also helped raise two cousins and became their legal guardian.

“I look at my daughter,” Crump said, “I look in her eyes, and then I look in the eyes of my nieces and nephews, and my little cousins — all these little Black and brown children. You see so much hope, so much optimism in their eyes. We’ve got to give them a better world.”

He added: “What I’m trying to do, as much as I can, even sometimes single-handedly, is increase the value of Black life.”

Crump’s path to becoming a lawyer and advocate began while growing up in Lumberton in southeastern North Carolina, where he was the oldest of nine siblings and step-siblings.

In his book “Open Season: Legalized Genocide of Colored People,” he described learning in elementary school that a white classmate’s weekly allowance was as much as what his mother made in a week working two jobs at a shoe factory and a hotel laundry.

He often recounts how he learned about the world by reading the newspaper to his grandmother and how his mother taught him the story of famed civil rights lawyer Thurgood Marshall, who became his hero.

“He has always gravitated toward leadership and being the answer to injustice,” said Sean Pittman, an attorney who has been his friend for 30 years, since they met at Florida State University. There, Crump was president of the Black Student Union and led protests to bring attention to how the school recruited and treated Black students.

But his rise from personal injury attorney to a voice of Black America began in 2013 when he represented the family of Trayvon Martin, a teenager killed by a neighborhood watch volunteer in Florida. He then took on the case for the family of Michael Brown, who was fatally shot by a white officer near St. Louis.

Crump organized marches and brought media attention to both of their deaths — each happening during the rise of the Black Lives Matter movement.

He has gone on to win financial settlements in about 200 police brutality cases. In March, the city of Minneapolis agreed to pay $27 million to settle a civil lawsuit from George Floyd’s family, which Crump said is the largest pretrial civil rights lawsuit settlement ever.

“I keep hoping and believing, if we can make them pay multimillions of dollars every time they shoot a Black person in the back, that there will be less Black people shot in the back,” Crump said.

His higher profile has brought more scrutiny and turned him into a frequent target. Conservative author Candace Owens in April accused Crump of trying to profit from police shootings and encouraging violent protests.

It doesn’t really bother Crump: “You can’t care what the enemies of equality think of you,” he said. “It would be the height of arrogance to think that everybody is going to love you. It’s not a popularity contest.”

It’s fitting that he is now mentioned among the giants of civil rights, said John Bowman, who has known him since Michael Brown’s killing and is now president of the St. Louis County NAACP.

“I can’t get in his head and say he charted out this course, and said, ‘I’m going to be the next strongest voice for injustice,’ ” Bowman said. “I do know that when the call was made, he didn’t shy away or step back from it.”

But Crump says he eventually would like to step back from it all.

“I literally pray for the day when I can close down the police brutality division of my law firm,” he said, “because I am so tired of seeing Black people killed by the police unjustifiably. I’d like to tell my staff that we no longer have to fight in the courts, or be counselors to so many grieving mothers and fathers.”