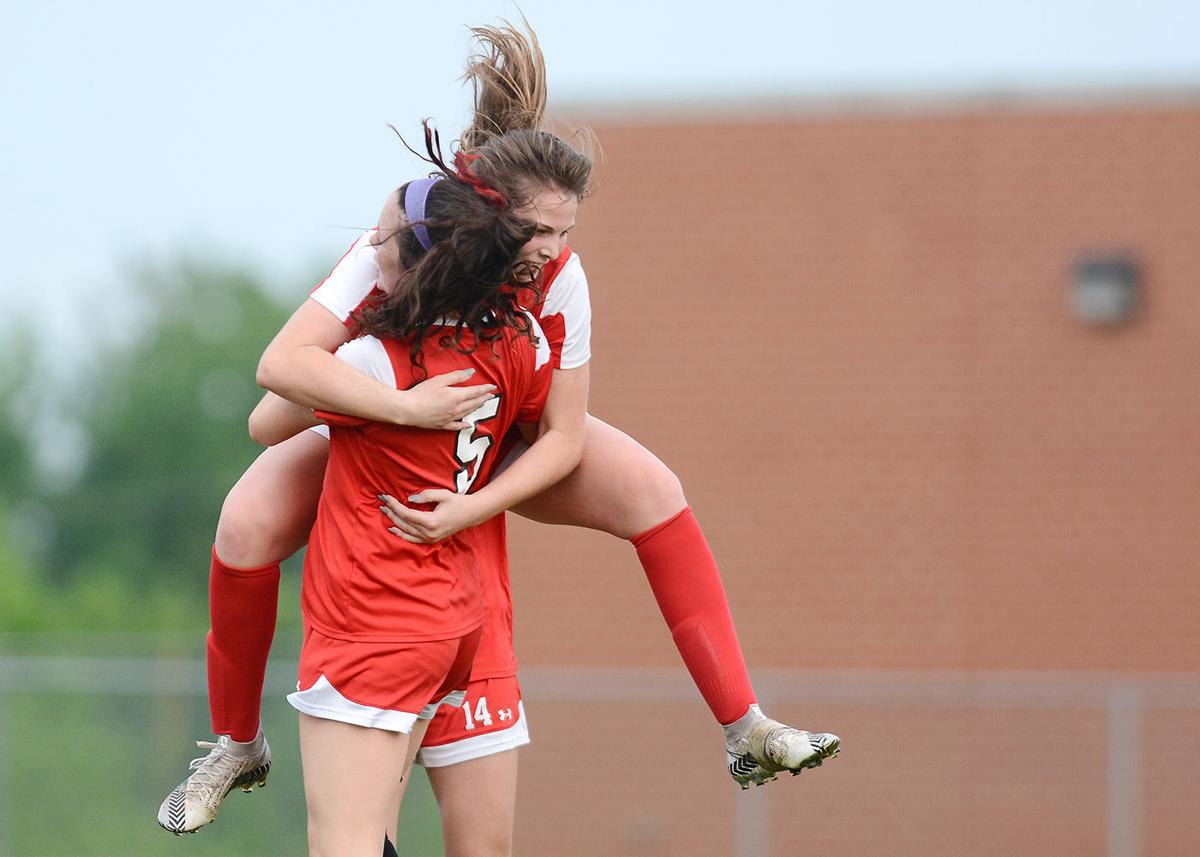 Wheatmore’s Ellie Garrison (5) gets a hug from Summer Bowman after Garrison scored a goal during a playoff match against East Duplin at Wheatmore. 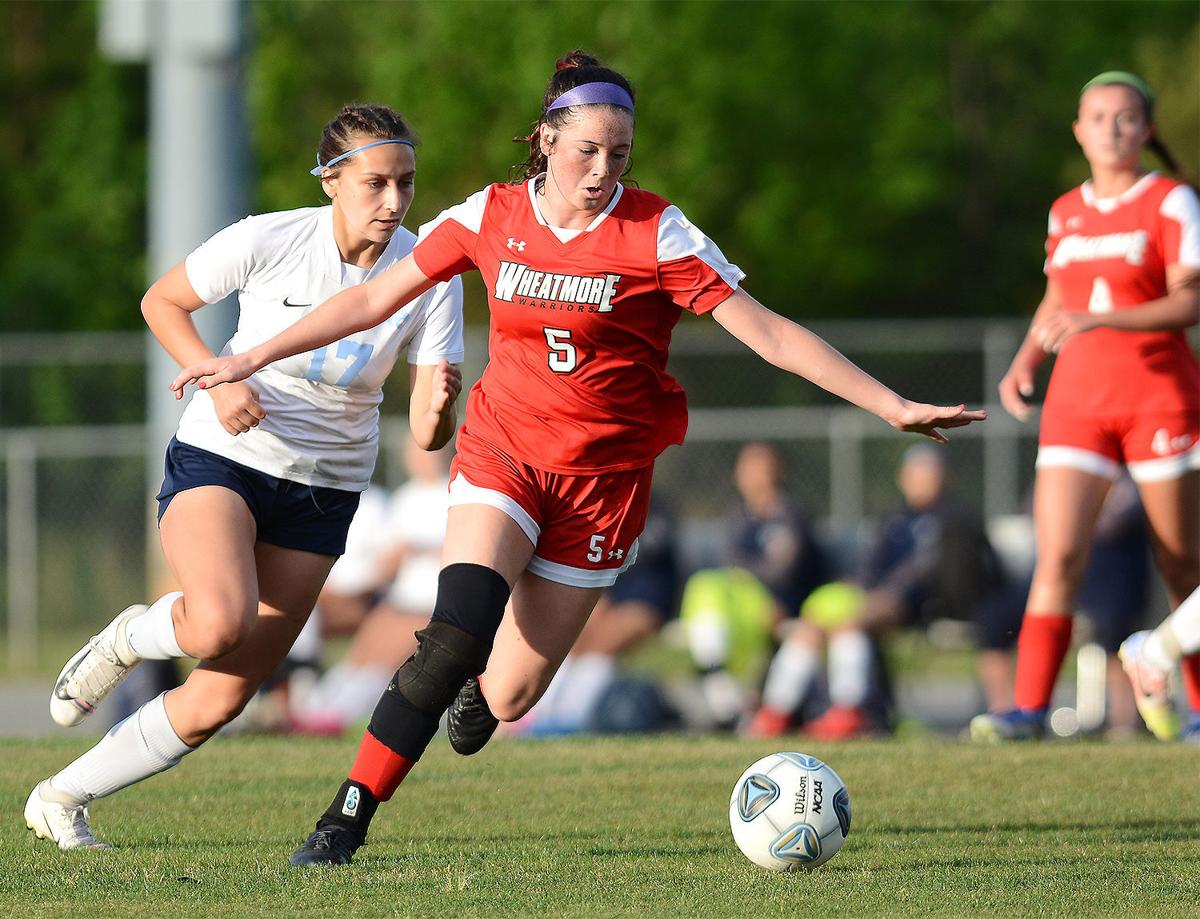 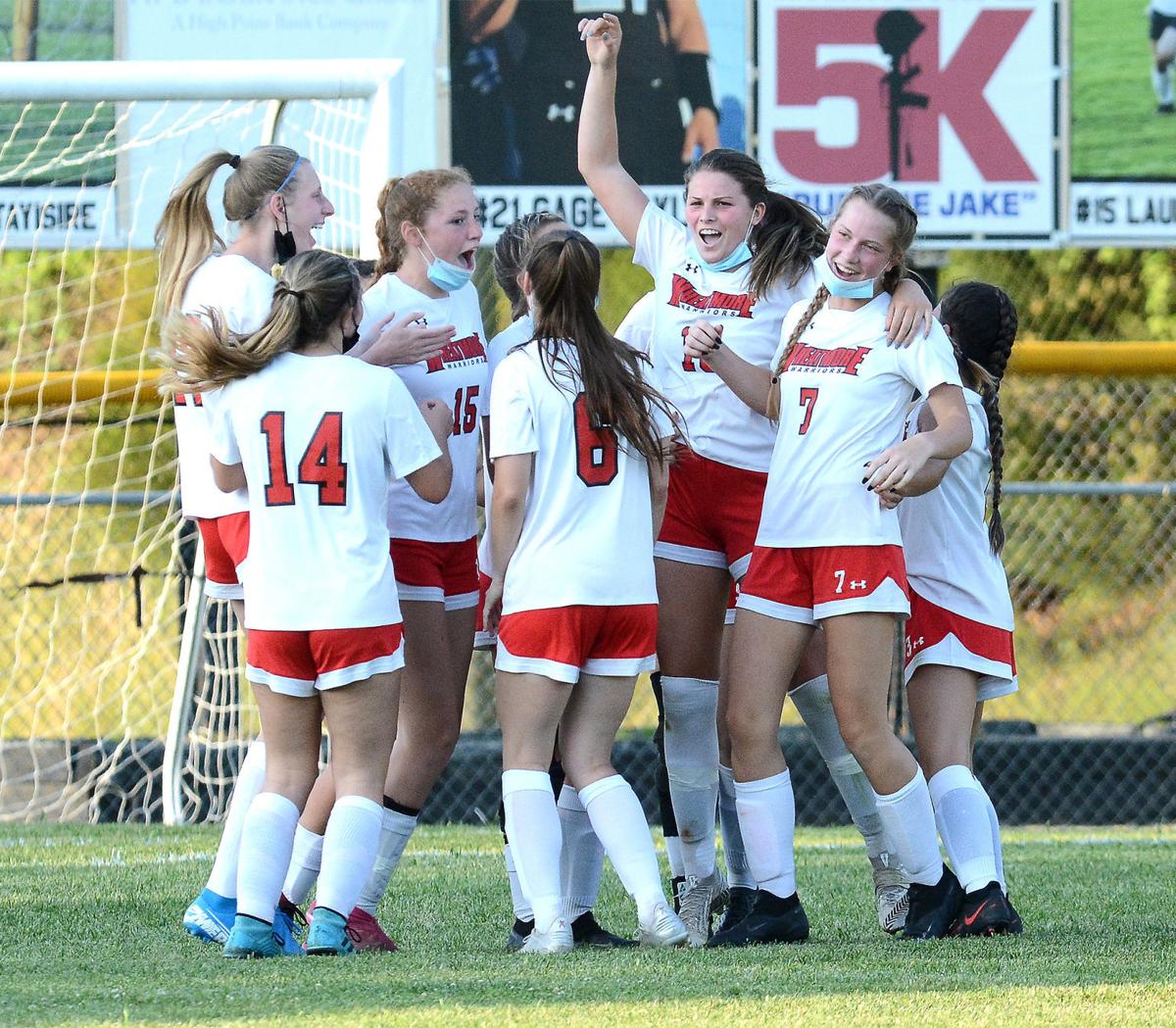 Wheatmore’s Ellie Garrison (5) gets a hug from Summer Bowman after Garrison scored a goal during a playoff match against East Duplin at Wheatmore.

TRINITY — Wheatmore girls soccer checked off a significant number of first-time accomplishments, both individual and team, during a 2021 season that culminated in a 3-2 defeat at Croatan High School.

Prior to that outcome, the seventh-seeded Warriors (11-1) were unblemished through the regular season. A 6-1 first-round playoff win over East Duplin clinched their ticket to the coast. Unfortunately for Wheatmore, the visitors began the game as one might expect a team that rode four hours.

Warriors coach Rick Maness said his team showed some ill effects from the trip in falling behind 2-0, but also responded in a way befitting a team that dominated the Pac-7 2-A Conference.

“I think the first half, we just had jitters,” Maness said. “At halftime, they came in, and I just listened to the girls. They pretty much said what they needed to do. In the second half, from then on, it was totally different. In that second half, we took the fight to them.

“What our kids did, the way it looked in the first half, was simply amazing.”

Maness said sophomore Summer Bowman and freshman Ellie Garrison fought through a difficult night, tallying the team’s goals to knot the score at two goals apiece, where it stayed through the end of regulation. In the extra session, the Warriors were unable to contain a strong Cougar attack.

Bowman and Garrison also scored five times each in one day during the season, as many goals as a Warrior has tallied in one game. Both did it during the same game.

“I kept pinching myself, thinking ‘Is this real?’ ” Maness said of the storybook season. “We’ve had games throughout the season, like when we played at Carrboro. Ellie couldn’t hit the ocean, but Summer could. In the Providence Grove game, Summer struggled and Ellie couldn’t miss. When they’re both clicking, it’s double trouble.

“Most programs have one, but to have two — those are special times right there.”

Maness pointed to the chemistry, which he said was exceptional, as a primary reason the team was able to maintain focus and produce a season unlike any before it. The Warriors have had successful seasons before. In 2019, Wheatmore advanced to the third round of the 2-A NCHSAA soccer playoffs for the first time in school history.

The Warriors finished that season at 15-5 after back-to-back, notching a pair of playoff wins over Atkins and East Bladen. Maness then lauded the efforts of Makenzie Bonner, Madison Gore, Kristina Eli, Skylar Craddock, Haley Carter, Emma Baynard, Molly Plees, Elisabeth Beusse and Karoline Lund in changing the fortunes of the program.

He was excited with where they left then-underclassmen Taylor and Kara Comer. Two years later, it was Taylor Comer who served as senior leader, along with Morgan Cunha, Danae Henderson, Olivia Williamson and others.

Maness’s words from 2019 rang true as the Warriors walked off the field for a final time last week.

“I know it’s painful for them right now, but I think after a day, they’ll realize they did something great,” the coach said of that 2019 senior class. “They did something very good. It’s painful when the journey ends, but we knew it was going to end sooner. We beat a good team the other night, we worked on some things, thought we were ready, but they’re good.”

Maness said he has coached teams that couldn’t click, but was thankful for this year’s group in the way they played together to reach their potential. While some demonstrate the capability to play the game, it remains rare to see a group as talented toss egos aside and embrace a common goal.

Next season is unlikely to be a rebuilding year for Wheatmore, which could return up to 90% of its goal production from this season. What the Warriors will be without is a group of players who helped build a program that has enjoyed a sustained level of success unparalleled in the years that preceded it.

“From the middle four, we don’t lose anything,” Maness said. “All of my seniors — they’re special, especially coming through the scenarios they’ve been in. Our season last year was cut … and I kept telling them, ‘The only thing that’s going to beat you is COVID. You’ve got to take care of yourself throughout the year, over and over and over. Don’t let that take it away from us.’

“They will be remembered for a lot of years.”