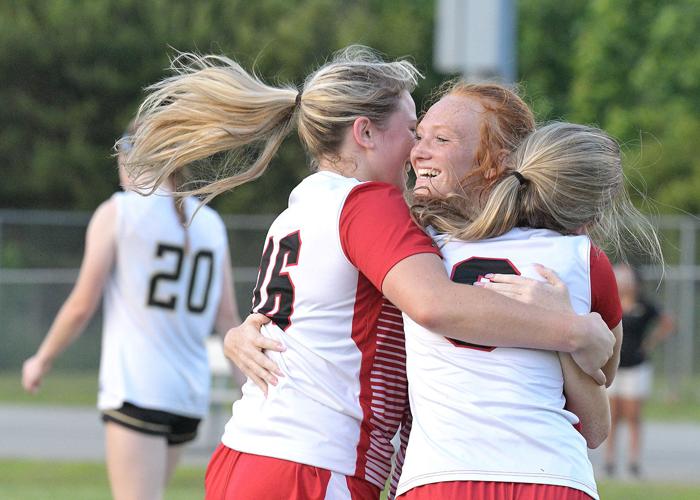 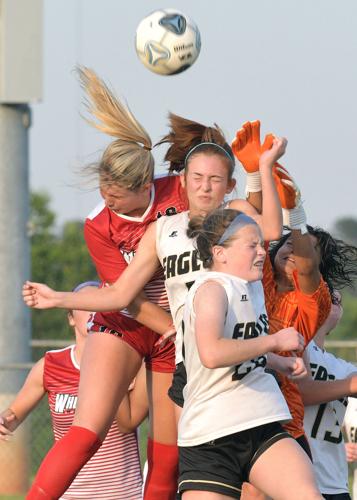 A crowd of East Davidson and Wheatmore players go up for a header near the goal during last week’s playoff match at Wheatmore. 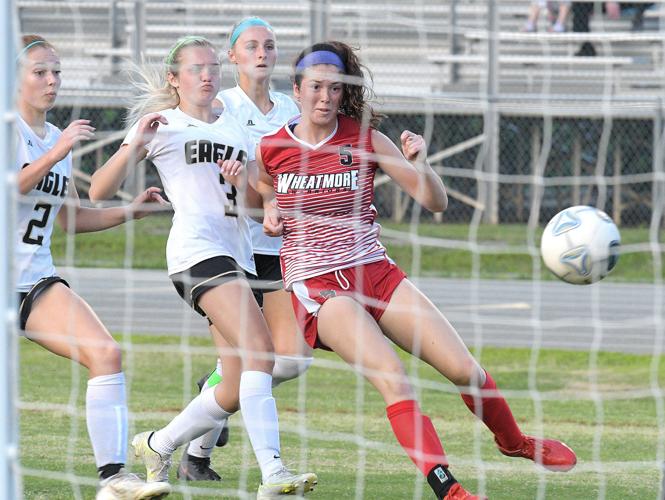 A crowd of East Davidson and Wheatmore players go up for a header near the goal during last week’s playoff match at Wheatmore.

TRINITY — East Davidson made things difficult, but eventually Wheatmore fought its way through to the third round.

The second-seeded Warriors scored four straight goals — including a pivotal goal just seconds before halftime — to pull away and beat the 18th-seeded Golden Eagles 5-1 last Thursday at Wheatmore in the second round of the NCHSAA 2-A West girls soccer playoffs.

“We needed a fight like this,” Wheatmore coach Rick Maness said. “We didn’t have one until the second round last year and it bit us. So, I’m really happy that we had a few little bumps throughout our game today. I just told them, ‘Keep shooting, keep shooting.’ ”

Ellie Garrison had two goals and one assist to lead the Warriors (21-0). Natalie Bowman added a goal and an assist.

Summer Bowman and Maggie Messner each had a goal while Kara Comer chipped in an assist as Wheatmore, which fell in the second round of the condensed playoffs last year, returned to the third round after advancing in 2019.

“I think we played well,” said Garrison, a sophomore forward. “We went out a little bit slow, but then we came out and just kept bringing it. So, I think we did well.”

Abby Connolly scored for the Golden Eagles (11-7-1) off an assist by Kayden Hegler to even the match 1-1 midway through the first half. And for much of the opening half, East was right there with Wheatmore.

But the Warriors, who won the teams’ two early-season matches by 9-0 scores, were eventually too much for the Golden Eagles, who were also highlighted by a strong effort by goalkeeper Dani Robles with eight saves.

“We know how good they are and what they’re good at — and they are good, you can’t take anything away from them,” East coach Jordan Beck said. “But these girls busted their butts. They played really, really hard.

“We knew it was going to be a tough game and they played phenomenal, especially in the first half. In the second half, I think legs got a hold of us, we got tired and they were able to keep pushing.

“We didn’t play bad, and I’m nothing but proud.”

Wheatmore, after regaining the lead on a goal by Summer Bowman in the 29th minute, took a 3-1 lead into halftime when Garrison worked through the defense and dished a pass to Natalie Bowman, who ripped a shot into the corner with less than 10 seconds left.

“That was pretty big,” Garrison said. “It was a great shot by Natalie — I mean, upper 90. I was just glad. Seven seconds to go and she scores — it’s just easier for all of us.”

The Warriors added scores in the 62th minute when, after Natalie Bowman’s shot hit the post, Messner fired into the open net and in the 63rd minute when Garrison made a long run up the left side, worked past the defense and scored to essentially seal the outcome in a hard-fought, physical match by both teams.

“In the first half, we were a little negative and at each other’s heads,” Garrison said. “Then, in the second half, we figured out that we just need to be positive. We just needed to put that negative stuff behind us, keep on going and encourage each other.”

Victoria Lowe finished with two saves for the Warriors, who outshot the Golden Eagles 28-4 for the match.

“We were challenged,” Maness said. “ And we got out of it with a quality win against a quality team. So, we’re lucky to move on. That was our goal — to get to the third round and move past it. And we’ve achieved it.”