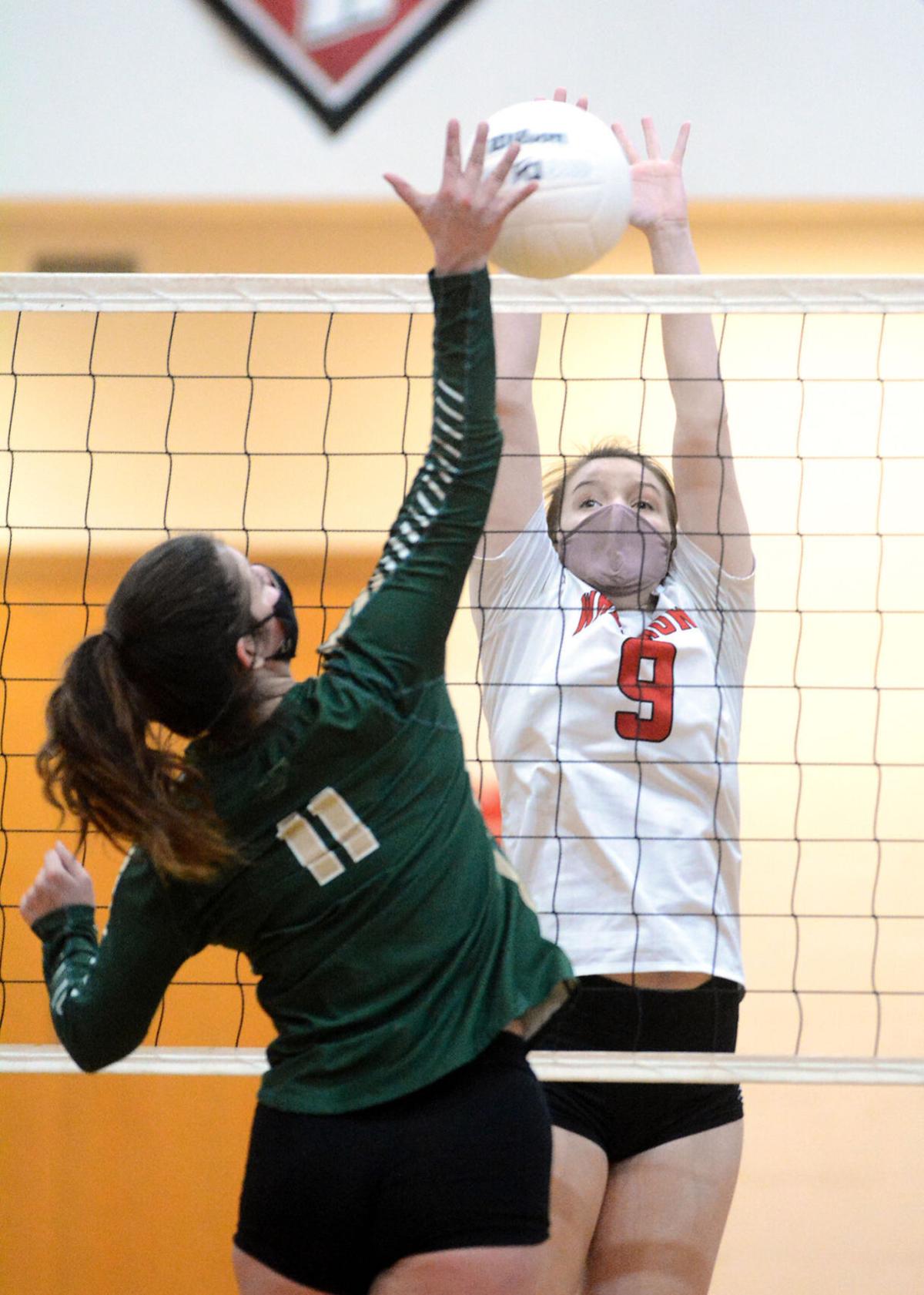 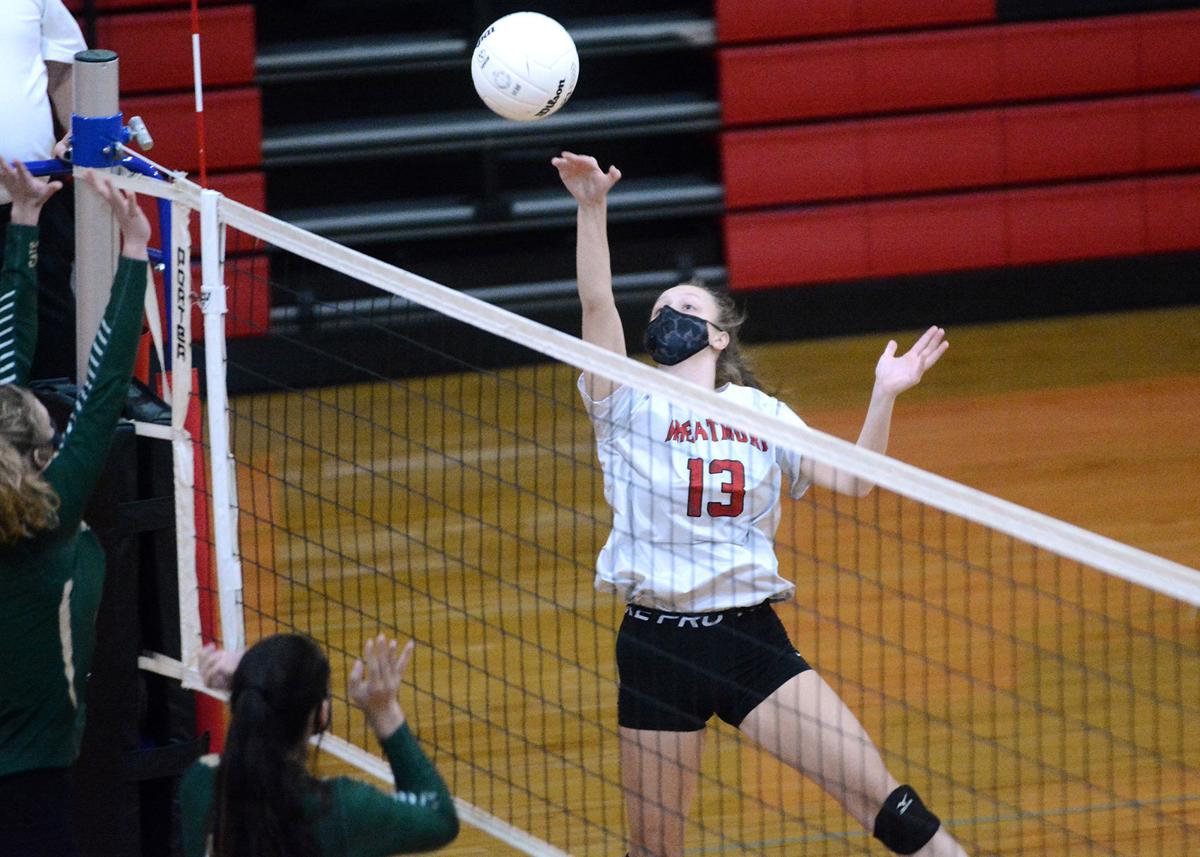 Wheatmore’s Zoie Wyatt tips the ball over the net during the home game against Eastern Randolph. 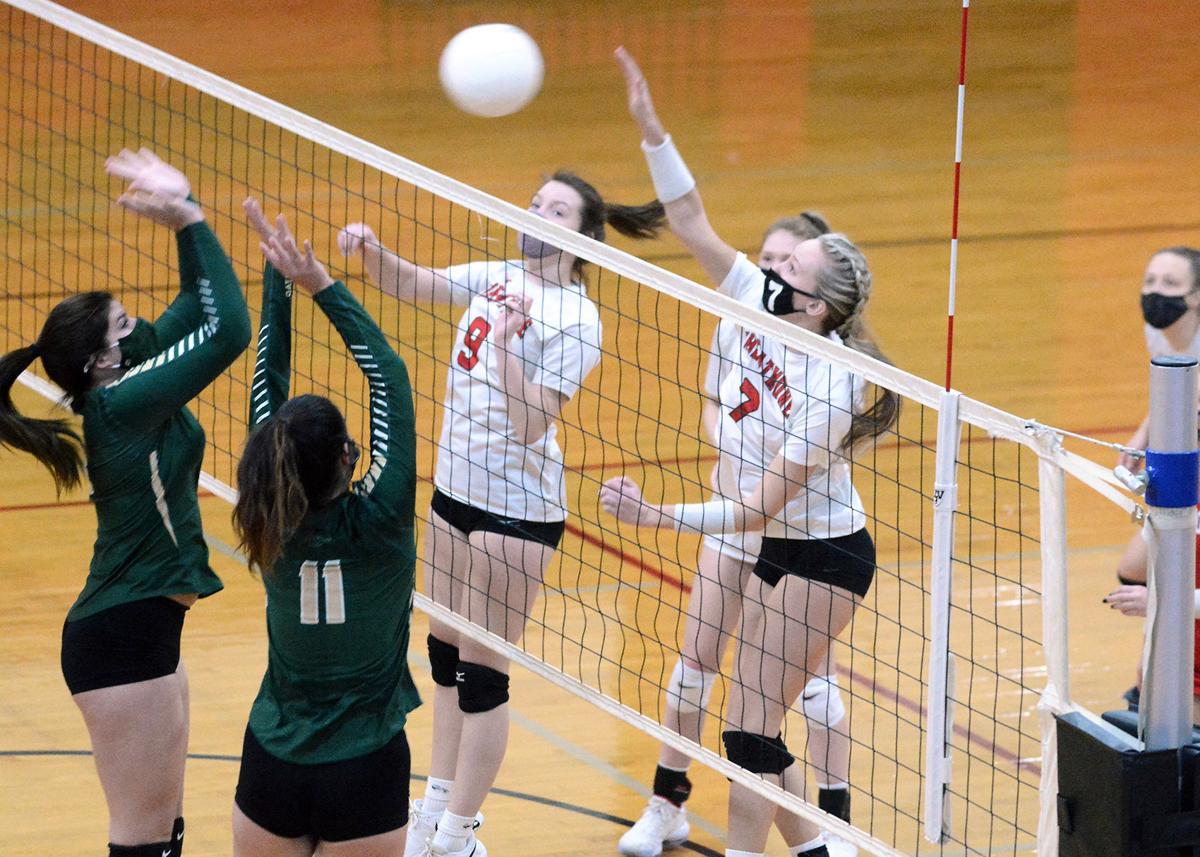 Wheatmore’s Carson Elliott, right, spikes the ball as teammate Emma Atwell feigns an attack during the match against Eastern Randolph at Wheatmore. 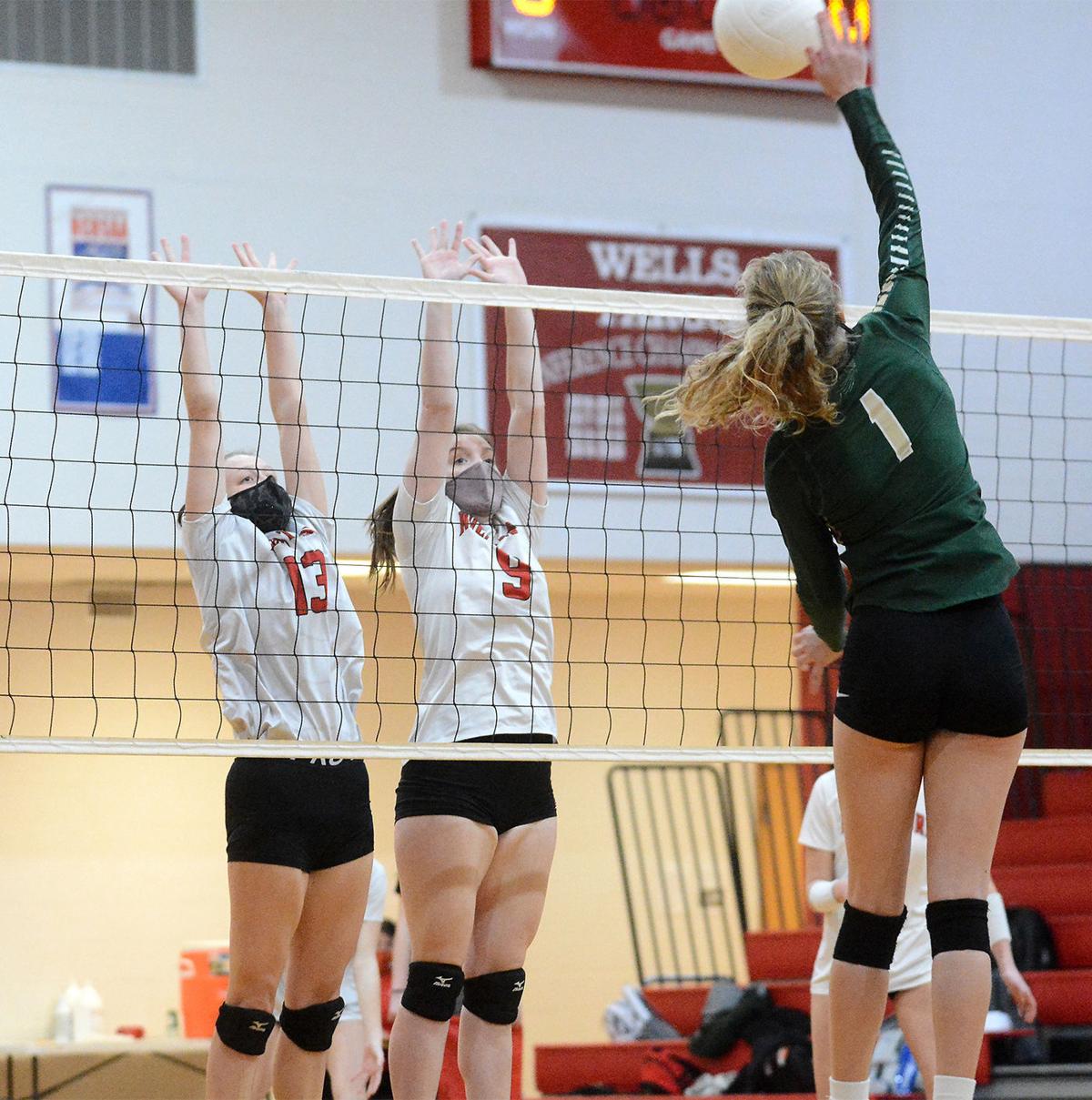 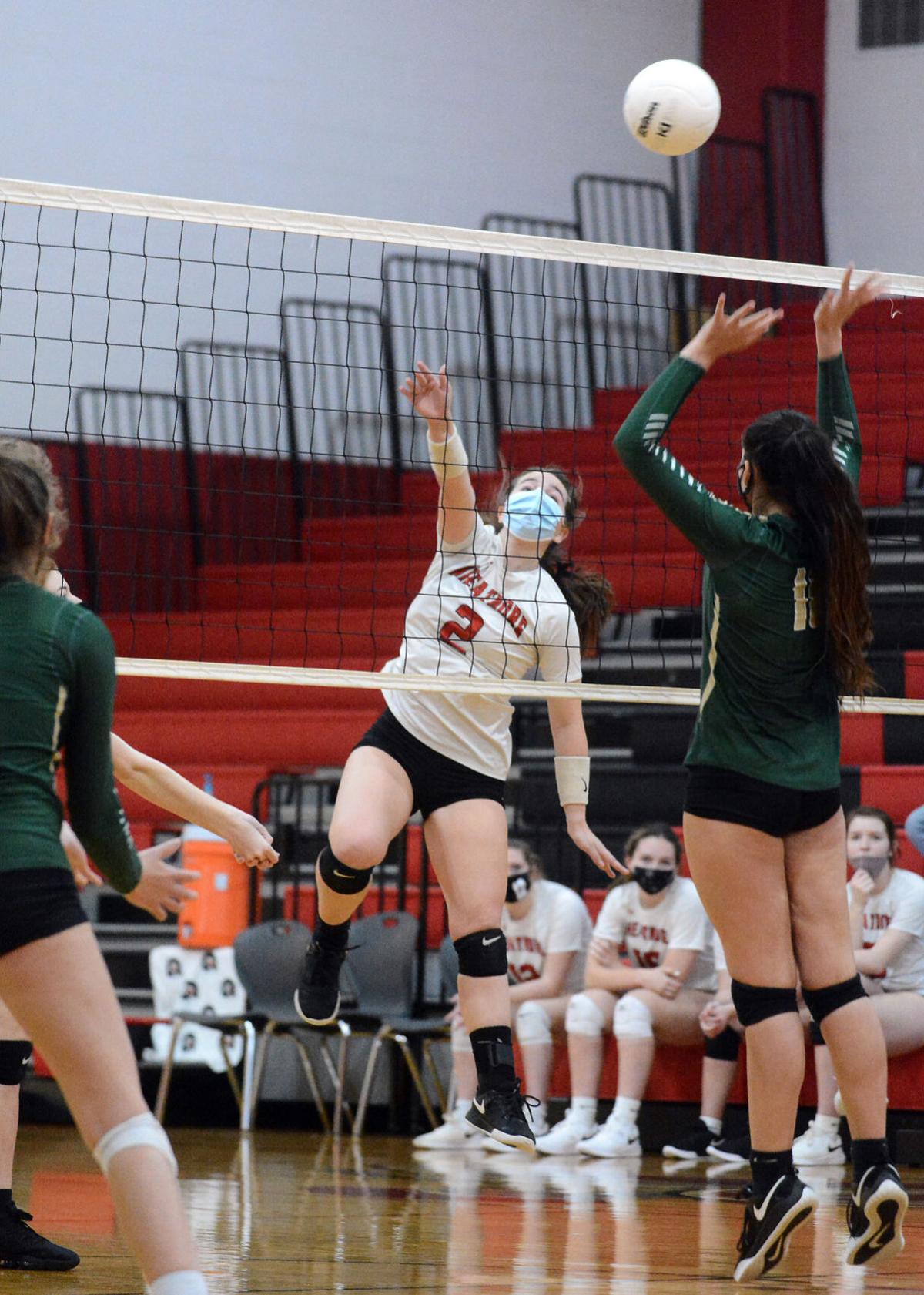 Wheatmore’s Bailey Whiteford spikes the ball during the match against Eastern Randolph at Wheatmore.

Wheatmore’s Zoie Wyatt tips the ball over the net during the home game against Eastern Randolph.

Wheatmore’s Carson Elliott, right, spikes the ball as teammate Emma Atwell feigns an attack during the match against Eastern Randolph at Wheatmore.

Wheatmore’s Bailey Whiteford spikes the ball during the match against Eastern Randolph at Wheatmore.

TRINITY — Wheatmore continues to regain its form following its return from a long break. The results have been good enough to get the job done in the meantime.

The Warriors, who were off two weeks last month because of the coronavirus, had stretches of good play in building big leads, but also struggled at times. Still, they found a way to sweep Eastern Randolph 25-7, 25-23, 25-12 in PAC-7 2A volleyball last week at Wheatmore.

“I’m not overly pleased with our play the last two days,” said Wheatmore coach Sarah Beth Campbell. “We’re just dragging. I don’t want to say we’re in a slump, because we’re winning. But we’re just in this slump of like going through the motions.

Carson Elliott had 13 kills, 16 digs and one ace while Bailey Whiteford had nine kills, eight digs and six aces to lead the Warriors (9-0 overall, 8-0 PAC-7), who overcame a 2-1 deficit against Randleman last Monday to win 3-2. Natalie Dodd added 12 digs, four assists and one ace, and Zoie Wyatt had three kills.

“I felt like we could play a lot better,” said Whiteford, a senior outside hitter/right side hitter/defensive specialist. “We had some miscommunication that we need to work on. But overall I thought we played really well.”

Wheatmore, which was idle Dec. 3-17 in following coronavirus protocols, returned to play two matches (at Providence Grove and at Jordan-Matthews) prior to playing Randleman. The long break, plus its start-and-stop return during the holidays, has been challenging, Campbell said.

The Warriors plowed through the first set — winning 19 of the final 21 points — to grab the early lead. But they trailed much of the second, falling behind 14-6 before inching within three several times late in the set. They still trailed 23-18 when they won the final seven points — keyed by a flurry of aces by Whiteford.

“It was tough in the beginning, especially since we played a tough team last night,” Whiteford said last week. “So, today we were just working on our skills, trying to communicate and really connect with our setters.

“We just had to talk more,” she said of the second-set comeback. “We definitely were a little rough that second set. We could’ve had a lot more movement. We were lazy and not really passing that well.”

In the third, Wheatmore used a 13-2 run, sparked by a seven-point burst to start, to lead 19-7 and closed out the sweep. The win solidified the Warriors’ position atop the conference, which will not have a tournament this year, and the aim is to continue to build off it with playoffs set to begin Jan. 12.

“I’m putting some pressure on my seniors — there’s five of them,” Campbell said. “They’ve just got to come alive. I think if one or two of them start clicking and coming alive a little more, then it’ll all fall into place. I try to help them understand that every game could be their last one.

“Don’t play like you’re going to look back and say, ‘Oh, that was my last game and look how bad we played.’ Go out and play where people are like, ‘Dang, that was a game.’ So, I’m hoping once we get back into the routine of school and coming to practice, then it’ll be more normal.”