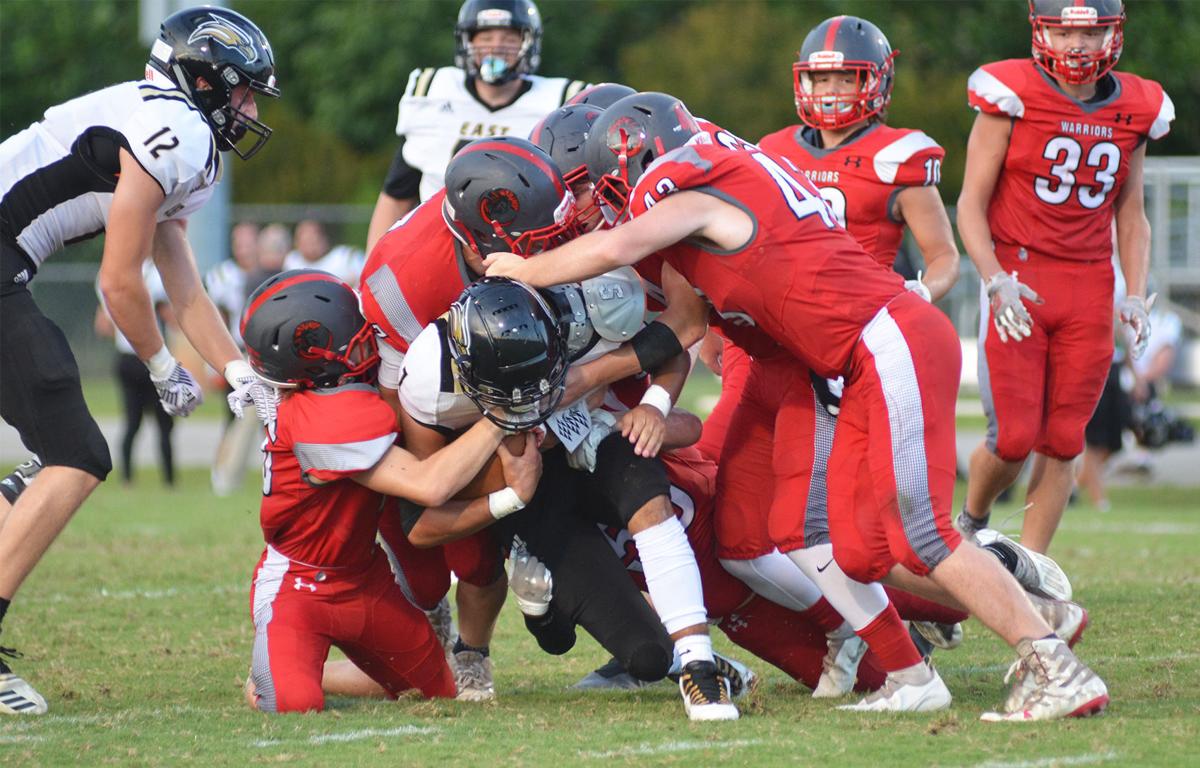 A swarm of Warrior defenders converge on the East Davidson ball carrier during last week’s 37-22 loss to the Golden Eagles. 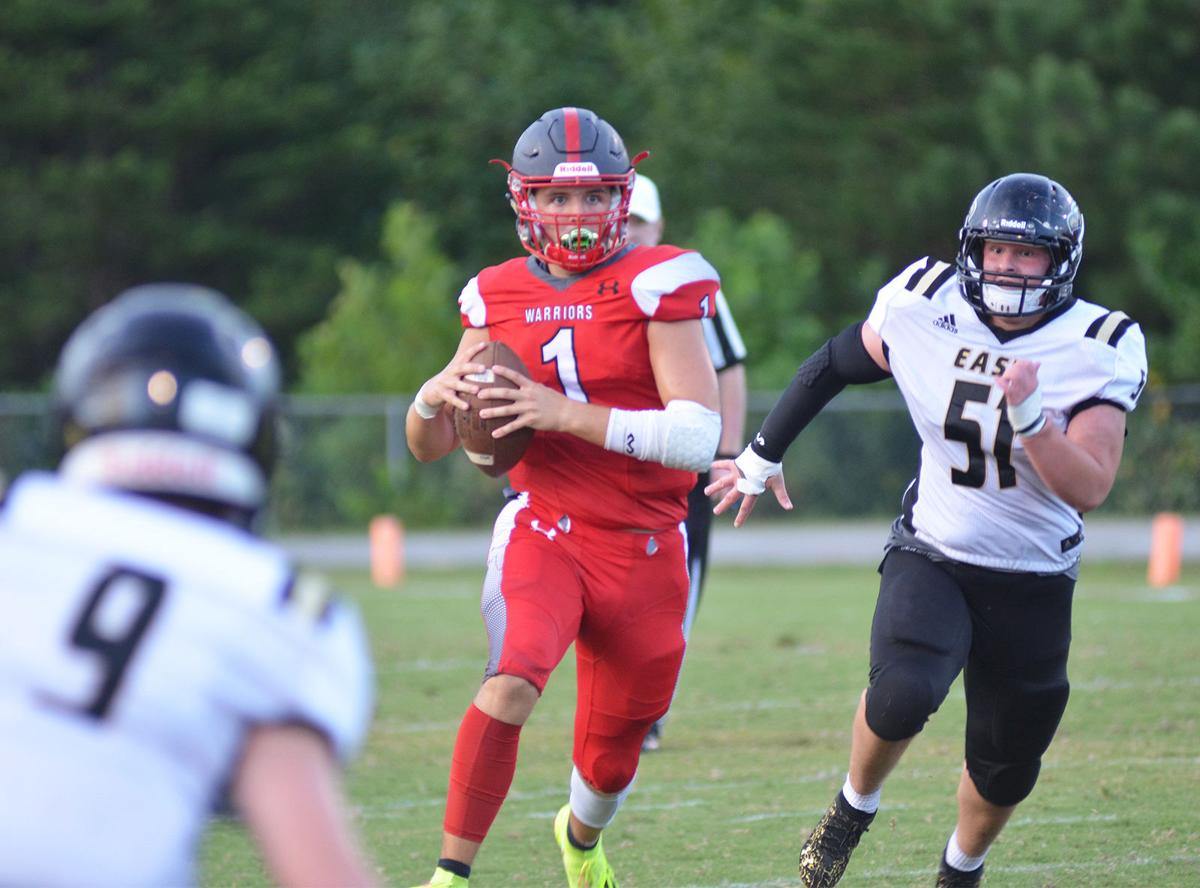 Wheatmore quarterback Ben Walker escapes the pocket as he is pursued by Cody Fishel (51) and Bradyn Slate (9) during last week’s game against East Davidson. 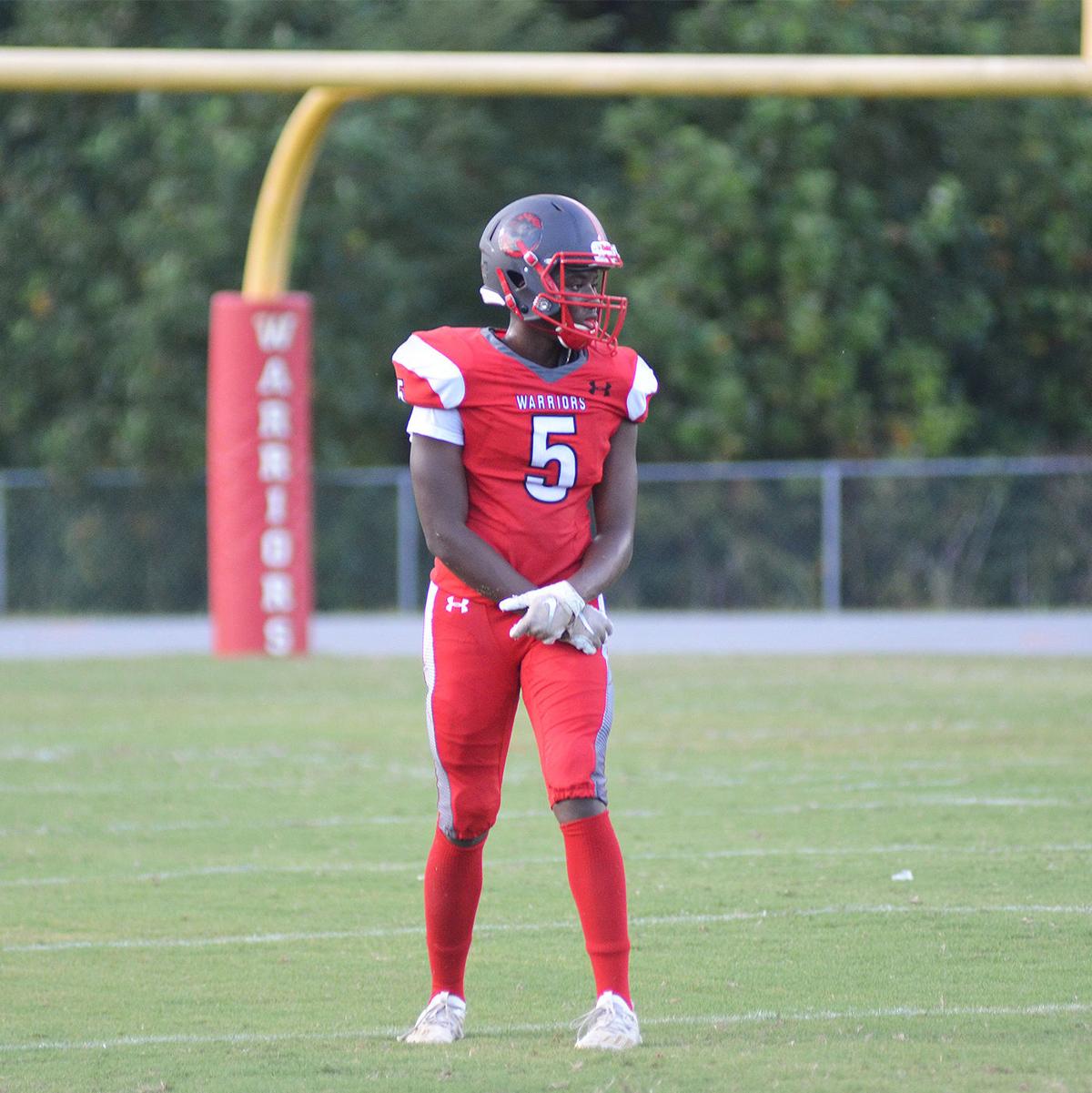 A swarm of Warrior defenders converge on the East Davidson ball carrier during last week’s 37-22 loss to the Golden Eagles.

Wheatmore quarterback Ben Walker escapes the pocket as he is pursued by Cody Fishel (51) and Bradyn Slate (9) during last week’s game against East Davidson.

TRINITY — Wheatmore football faces an uphill challenge this week to get back on the right side of the ledger as it prepares to take on a local 3-A program coming off a pair of victories.

Wheatmore (1-1) will attempt to rebound from the loss it sustained to East Davidson a week ago as the Warriors host Ledford. Kickoff is set for 7:30 p.m.

Outmanned by the Golden Eagles in a 37-22 final, Wheatmore hopes to utilize a more balanced attack against the Panthers. Warrior quarterback Ben Walker was unable to throw his team back into the contest after it fell behind in the first quarter last Thursday and saw its defense falter in the second, yielding a pair of big plays.

For the Warriors, it was a frustrating setback after the team began the season with a resounding 34-13 win over East’s conference foe West Davidson. Walker spearheads an aerial attack that customarily yields bushels of yardage, dating back to when three-year starter Nick Halo wowed fans with his arm talent and led the team to 24 career victories.

The senior signal caller showed signs of being the next in a line of successful upperclassmen Warriors behind center, but an early deficit made it difficult for Wheatmore to incorporate elements of its offense.

“We would have liked to run the ball more,” Warrior coach Philip Yarbrough said. “The problem was that East was chewing up so much clock. We were behind and with a short clock most of the night, so we were trying to press. I thought we did a good job of giving ourselves good looks. They defended a couple passes well, and we had a few drops. We ran the ball well in spurts, but that’s obviously a place we’ve got to improve offensively.”

Wheatmore was also on the losing end of what both coaches pointed to as the turning point of the game. After the initial score put the Warriors on top, a 50/50 ball ended up in the Eagles’ possession, which allowed their first scoring drive to continue.

Converting that possession into points, East utilized the shift to power its dominance of the second and third quarters.

“We had a big momentum shift there,” Yarbrough said. “We drove down and scored, came back and had what we thought was an interception. That got overturned and was a big pass play for them, and that kind of shifted the momentum for a minute. We’re young in spots and are still learning how to play the game. The heart was there, the effort was there. We just made too many fundamental mistakes on both sides of the ball.”

East coach Vance Hanner credited his squad for capitalizing on those mistakes. The Eagles were on the plus side of the turnover battle, established its ground game early and played from ahead. All are among the goals Hanner has outlined for his team from the season’s outset as keys to their success.

“Great adjustments by the defensive coaching staff,” Hanner said. “Just a great overall effort by the kids and the coaches.”

Wheatmore began last week’s tilt with a defensive three-and-out and a 58-yard touchdown pass that had Hanner wondering if he had made a mistake receiving the opening kickoff. Instead, the Eagles methodically drove the ball down the field to end the first quarter with a Josiah Allred 2-yard touchdown.

From there, Allred would add two more scores on the ground — those of the big-play variety — from 51 and 45 yards out, respectively. Brogan Hill added two more big plays of his own, touchdown passes of 35 and 75 yards through the air. A late sack of Walker put a bow on an excellent all-around performance by the Eagles.

“We were not ready (against Providence Grove),” Hanner said. “It was a good test to come out here and go against that passing attack that Wheatmore’s got. Coach Yarbrough, phenomenal coach, does a great job with this program. It was a big win for us.”