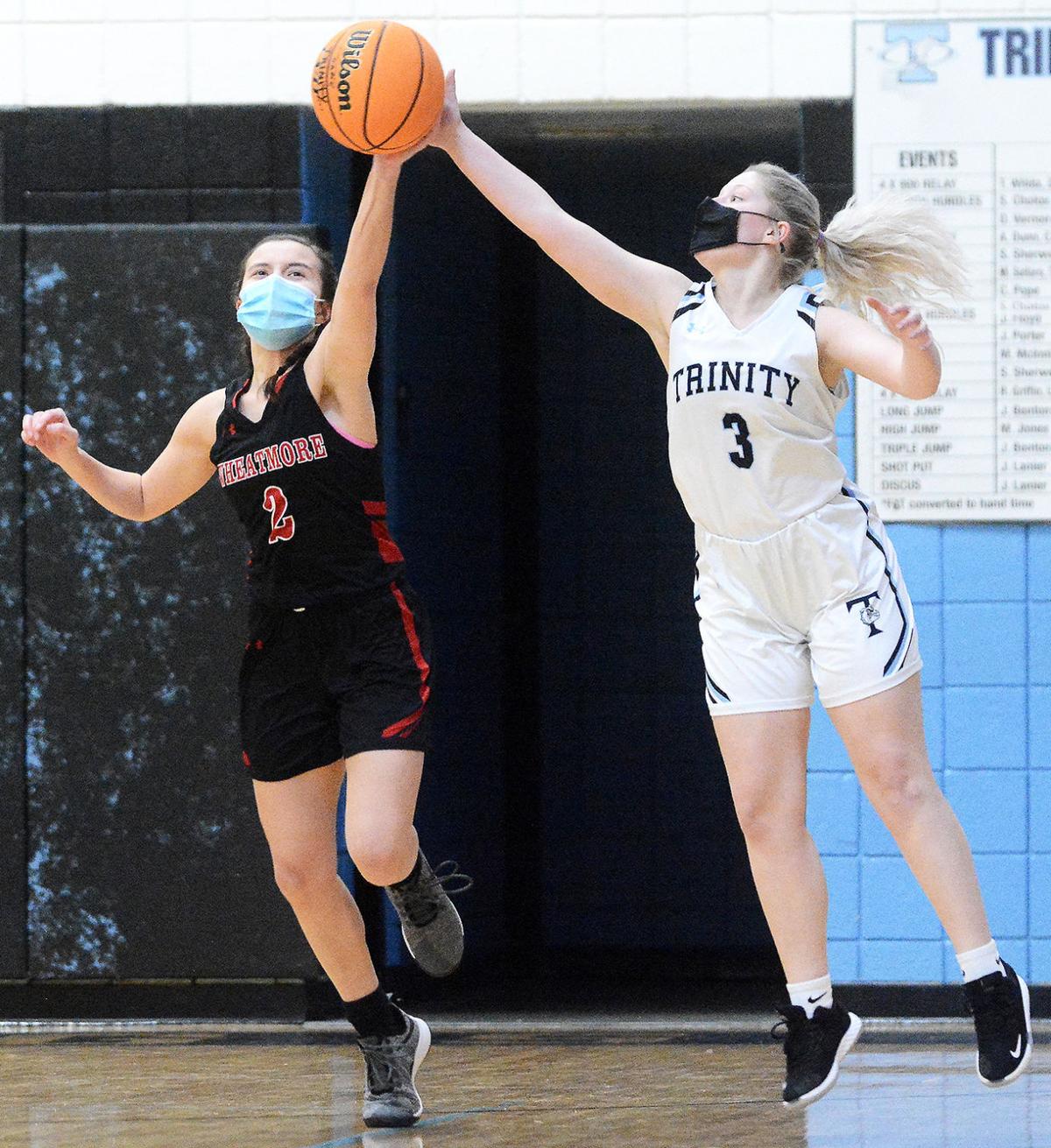 Wheatmore’s Taylor Comer, left, steals a pass ahead of Trinity’s Kaitlyn Furr during the game at Trinity last week. 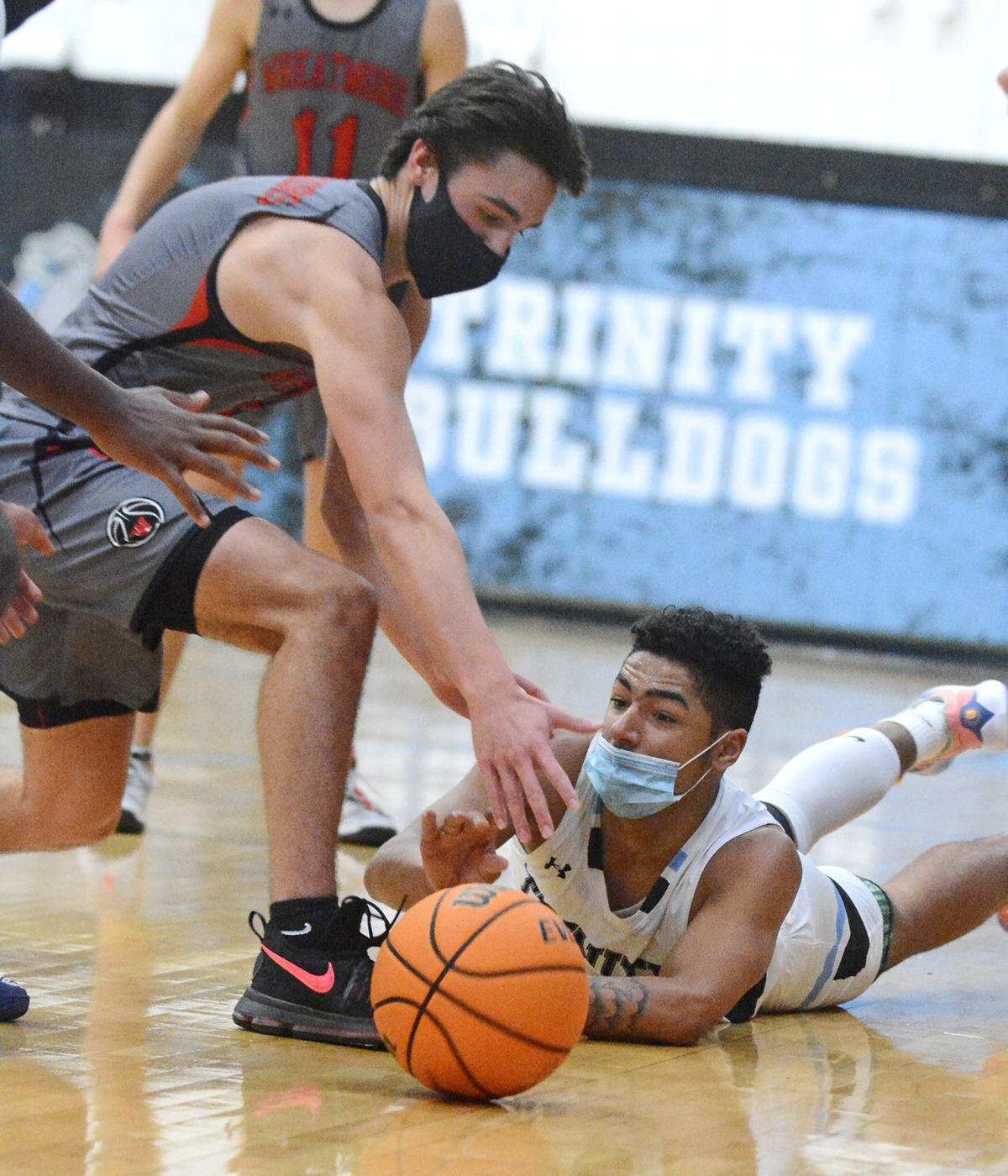 Trinity’s Garrett Moser, right, dives for the ball, forcing a turnover, against Wheatmore’s Dylan Weil during the final minutes of last week’s game at Trinity.

Wheatmore’s Taylor Comer, left, steals a pass ahead of Trinity’s Kaitlyn Furr during the game at Trinity last week.

Trinity’s Garrett Moser, right, dives for the ball, forcing a turnover, against Wheatmore’s Dylan Weil during the final minutes of last week’s game at Trinity.

TRINITY — Trinity had a sense it could turn things around in its rematch against archrival Wheatmore.

The Bulldogs, after losing the series opener earlier last week, built a double-digit lead into halftime and made big plays down the stretch to fend off the Warriors’ comeback to win 51-43 in PAC-7 2A boys basketball last Thursday at Trinity.

In the girls game, Wheatmore — getting up the court quickly and scoring baskets in waves — scored the first 13 points of the game and raced to a 55-13 win.

“I thought we played an A tonight,” Trinity boys coach Tim Kelly Sr. said. “We moved up from a B-plus to an A. Last game, we told our kids we actually scored more from the floor than they did. But they went to the free-throw line much more than we did — that was the difference in the game.

“You have to be more disciplined than just walling up. We try to block everything, and we might have one guy who’ll block a shot every four times. So, that’s what got us in trouble. We had some guys come in off the bench who made big baskets, and I thought we did a better job not turning the ball over.”

Trinity scored the first five points of the game and never trailed. It extended its five-point lead after one quarter to 13 with two minutes left in the half at the end of a 9-1 run. The Bulldogs led 21-10 at halftime and stretched their lead to 17 with three minutes left in the third.

“I felt like we played well,” Owens said. “We got on them early, and I think that gave us a lot of momentum going toward the end of the game. We have four seniors and it’s Senior Night. Everybody really wanted to win — especially since it’s the seniors’ last time playing Wheatmore. So, I wanted to go out there and get them as bad as I could.”

The Warriors got within two with 5:26 left in the game. But Owens hit a 3-pointer on the ensuing possession to push Trinity’s lead back out, and Wheatmore couldn’t keep pace as the Bulldogs scored on six of their next eight possessions to lead by 11 with 29.5 seconds left.

“I just told the guys to stay calm through all that,” said Owens, who made a driving layup and a 3 from the corner during the final two minutes. “We’ll be fine and just stay patient on offense, take good shots and just slow it down a little bit. And if we have time to run, then run and get to the basket.”

Gavin Dennis scored 11 points to lead the Warriors (5-4, 4-4), who struggled shooting but suddenly scored seven straight points to open the fourth and pulled within two. Dylan Weil and Jaxon Kimmons each added eight points, but Wheatmore had just a couple empty possessions that were the difference late.

“We played really poorly in the first half,” Wheatmore coach Jonathan Evans said. “We just couldn’t get anything to fall and get any positive momentum. Second half, I couldn’t be prouder of the effort my guys showed.

“The fight to come back — we had to dig deep and find some guys who could get it done. A lot of depth guys came in and played really, really well. So, I’m proud of the effort in the second half. Just couldn’t quite finish the job.”

Kylie Biggs scored 24 points to lead Wheatmore (5-3 overall, 4-3 conference), which led 22-4 after one quarter and 38-9 at halftime. Taylor Comer added 15 points — eclipsing 1,000 points for her career — while Kara Comer and Rian Perry each added six points.

“Compared to the other night, I loved our start,” Warriors coach Pete Kilcullen said. “We came out right away, dictated the tempo. I thought we fed the post really well, and Kylie Biggs finished a lot of those early opportunities, which gave us that early run.

“They’re not built for comebacks. So if you can take them out of their game and get them behind early, then you’re going to have a lot of success. So, I thought we did a great job dictating the tempo to start the game.”

Wheatmore — able to force turnovers and misses on defense and quickly get up the floor for shots near the basket — pushed its lead to 40 at the end of the third quarter.

“I think we played really well,” Taylor Comer said. “We just had a great defensive effort and offensive effort overall. Shots were falling, and we had some people step up and really take some big shots.”

Her night was highlighted by a 3-pointer from the left wing with 1:23 left in the third that pushed her over 1,000 points for her career.

“It feels great,” she said. “I’ve really been trying for it all season. And I’m really just proud I hit it.”

Autumn Gentry scored four points to lead Trinity (1-7, 1-6), while Alania Lanphar added three points. The Bulldogs were patient moving the ball, but the Warriors showed their experience by pouncing on lapses and quickly turning them into points on the other end.

“We played well at times in spurts,” Trinity coach Mike Sink said. “Wheatmore’s a good team. Our biggest problem this year, after last year, is that (other teams) recognize Autumn’s our shooter. I’ve said it over and over — evidently, Autumn’s the best player in the conference.

“She has to be — everybody double-teams her and triple-teams her. We’re a team that averages 28 points and they’re trying to shut her down. I think that’s a compliment for her. For our team, it’s a lot of pressure on our team. She’s tried to carry them, but they’re totally taking her out of the game.

“We’re just at a point where something’s got to click. But overall I’m proud of the girls. They work hard every day at practice.”